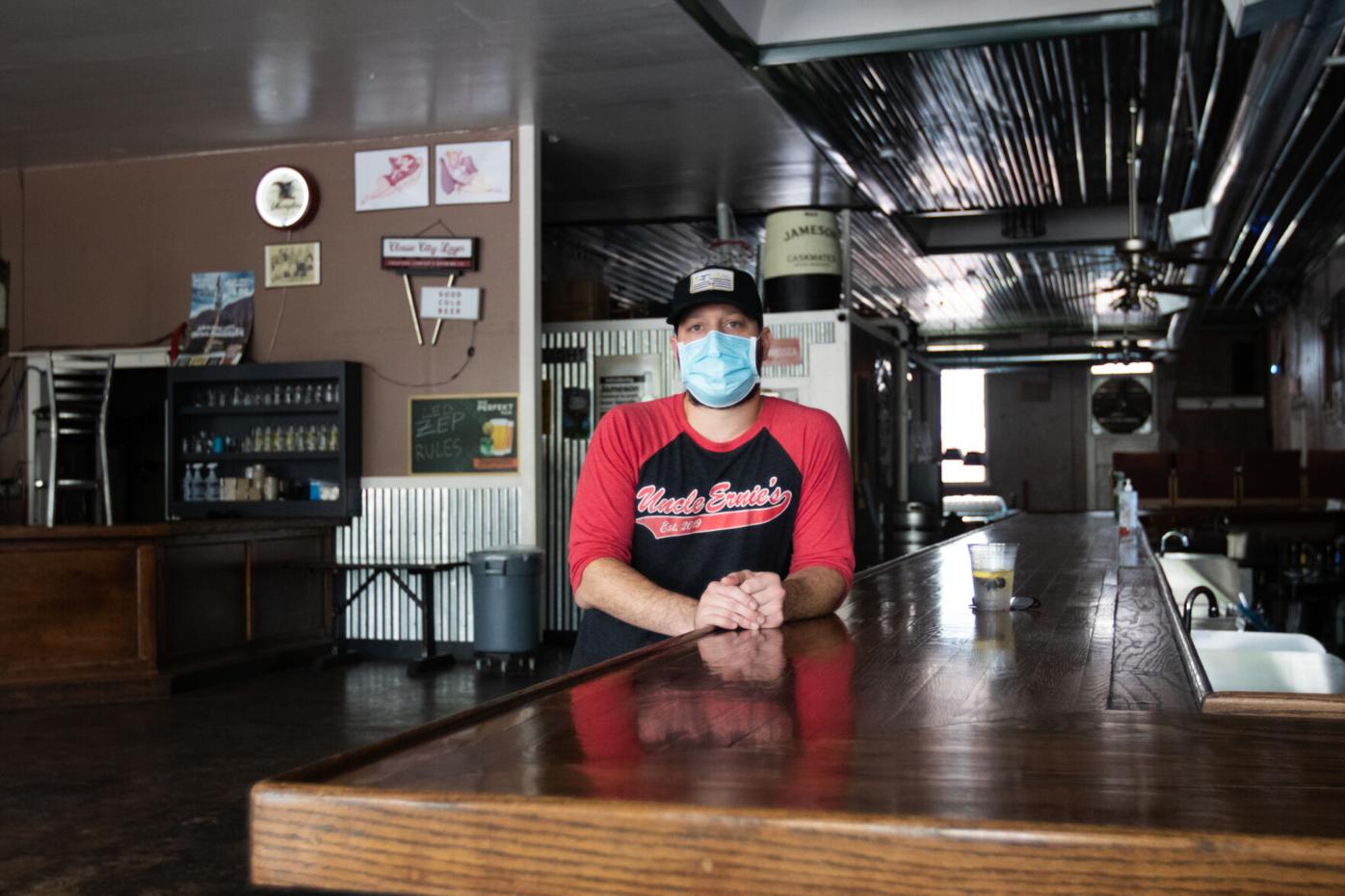 Daniel Battinelli stands in an empty Max Canada on Sept. 18, 2020, a local bar in downtown Athens, Georgia, that he owns. Battinelli decided to close the bar in March due to safety concerns while keeping his other business next door, Uncle Ernie’s Pub N Grub, open with limited seating. (©Sofi Gratas, sofigratas@gmail.com) 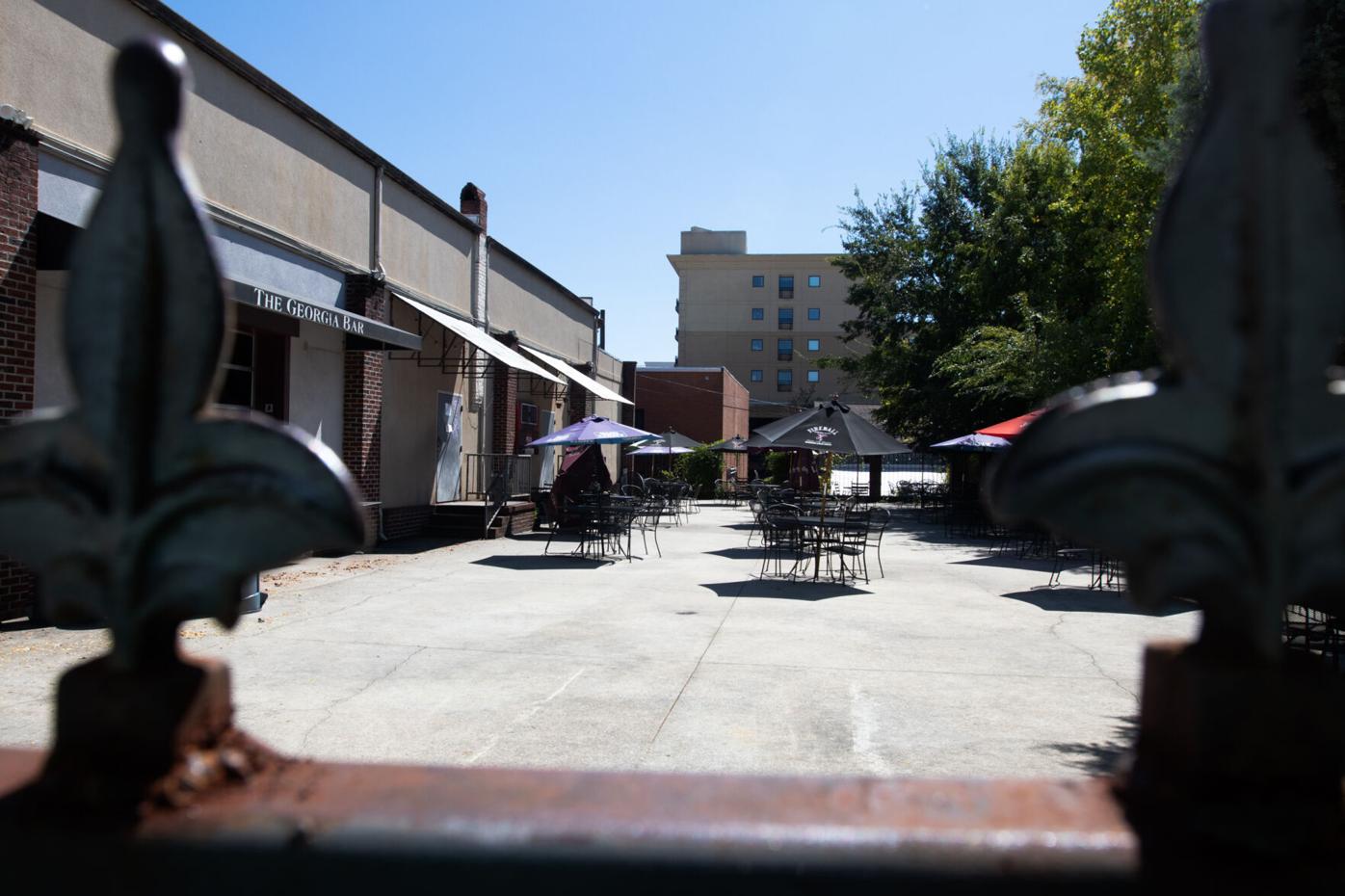 The empty patio of The Max Canada, a bar in downtown Athens, Georgia, on Sept. 21, 2020. Because of safety concerns regarding COVID-19, bars have had to adapt to slow business by only opperating outdoor service. (©Sofia Gratas, sofigratas@gmail.com)

Daniel Battinelli stands in an empty Max Canada on Sept. 18, 2020, a local bar in downtown Athens, Georgia, that he owns. Battinelli decided to close the bar in March due to safety concerns while keeping his other business next door, Uncle Ernie’s Pub N Grub, open with limited seating. (©Sofi Gratas, sofigratas@gmail.com)

The empty patio of The Max Canada, a bar in downtown Athens, Georgia, on Sept. 21, 2020. Because of safety concerns regarding COVID-19, bars have had to adapt to slow business by only opperating outdoor service. (©Sofia Gratas, sofigratas@gmail.com)

After moving through a passageway built in a downtown Athens alleyway, Daniel Battinelli walks around an empty bar. Even at 2 p.m., The Max Canada on Clayton Street would normally be seeing some kind of action — a bartender prepping the coolers for the Friday night rush or regulars getting an early start. But it's silent, and the chairs are up.

“We're trying to take all the right steps,” Battinelli said. “Obviously, there's a lot of money on the line that could potentially be lost in that. But health and everyone else's health is more important to us than sacrificing that kind of stuff.”

Battinelli owns Max Canada and its neighboring restaurant, Uncle Ernie’s Pub N Grub. The bar had been completely closed for about three months before opening back up in late June for outdoor service, taking a huge hit, Battinelli said. Uncle Ernie's remained in operation while functioning at limited capacity.

As college students came back into town for the fall semester, Athens restaurants and bars have done better economically than during a slow summer impacted by the COVID-19 pandemic. But a lag in federal unemployment and stimulus checks has left many local businesses hoping for the one thing that’s usually for certain: football season.

Under normal circumstances, the University of Georgia’s football season would bring a major boost in business, attracting over 90,000 fans to Sanford Stadium and countless others for the game day atmosphere alone. As the SEC moves forward in allowing its 14 teams to participate in a conference-only schedule, UGA is planning on hosting four home football games at 20-25% capacity within Sanford Stadium. The Bulldogs’ first home game will be against Auburn on Oct. 3.

“I think that it’s going to be busy Saturday in Athens,” said David Lynn, director of planning and outreach for the Athens Downtown Development Authority. “Can all those people come to downtown and social distance and maintain safety? I don't think there's going to be much of that.”

The mission of the ADDA is to advocate for and help attract crowds to the downtown area, Lynn said, so finding the balance between promoting economic sustainability while keeping people safe during a pandemic has been challenging.

Contradictions between local government public safety responses and Georgia Gov. Brian Kemp’s state reopening plans has left the execution of county-wide mask mandates up in the air, especially on private property, such as bars. While the Athens-Clarke County Police Department has issued citations and distributed masks in accordance with local mandates, there are no specific plans from the Athens-Clarke County mayor and commission to combat potentially large football season crowds.

“Can we do this safely? The answer is probably not,” Lynn said. “You know, the more and more people come to town, the more likely they’re going to get sick.”

As cases in Athens rise — UGA reported over 3,000 cases on campus alone since the semester started — the different ways in which business owners decide to operate regarding safety protocols are hard to ignore.

“I blame some of the business owners downtown as well for not taking the right stance and not being responsible,” Battinelli said. “But it's hard to judge. … They could be losing their business if they don't make a certain amount of money.”

Betting on a crowd

Blue Sky would normally be packed on a gameday. The bar’s downtown location makes it a prime spot for droves of fans exiting the stadium. Although Chaille said he’s received the support he needs to make ends meet, he agrees that there’s a big population of bartenders, servers and local business owners who depend on gameday profits.

“There's a lot of business owners who are banking on being very busy,” Chaille said. “I mean, I think a lot of people kind of float from football season to football season.”

At Trappeze Pub, owner Sam Wells is training his staff to prepare for long wait times and potentially difficult customers. Trappeze reopened in September after a months-long pandemic-related closure followed by renovations.

Wells is confident Trappeze will make it on the other side of a worst-case scenario, saying his restaurant relies more on steady, year-round business.

“You could say, just based on the number of people who come in the door, that all of our biggest record nights are during football season,” Wells said. “As long as students are still around and we still have most of our customer base … we’ll be perfectly fine.”

At Max Canada, Battinelli is considering setting up a projector on the patio for gamedays or renting parking spots out front to allow for more customers. He’s betting on nostalgia and camaraderie to bring people downtown, whether or not the football season is played in its entirety.

“I think people are going to show up,” Battinelli said. “I think that it's just natural for people to want to show up.”

In April, when members of the Athens community learned of the suicide of Marti Schimmel, own…

A Mathis-led offense could add another dimension for Georgia that it has not seen consistently since DJ Shockley was taking snaps under center.

In spring 2020, the Athens dining scene all but shut down when COVID-19 restrictions forced restaurants to switch to take-out service or close…

Here are a dozen spots with patio and sidewalk seating recommended by the staff of Eat & Drink Athens, GA, The Red & Black's special p…

8 places to get a non-alcoholic drink in Athens

A drink doesn’t have to contain alcohol to be delicious and enjoyable. From seasonal lemonades to bubble tea, Athens has plenty of options for…

The Mayflower Restaurant has sat across the street from the Arch on the University of Georgia’s North Campus since 1948. When Mayflower opened…

Uncle Ernie’s Pub n’ Grub and The Max Canada — the two adjoining businesses at 235 and 243 W. Washington Street — officially closed their doors early this January. Both businesses were managed by father-son duo, Ernie and Daniel Battinelli.