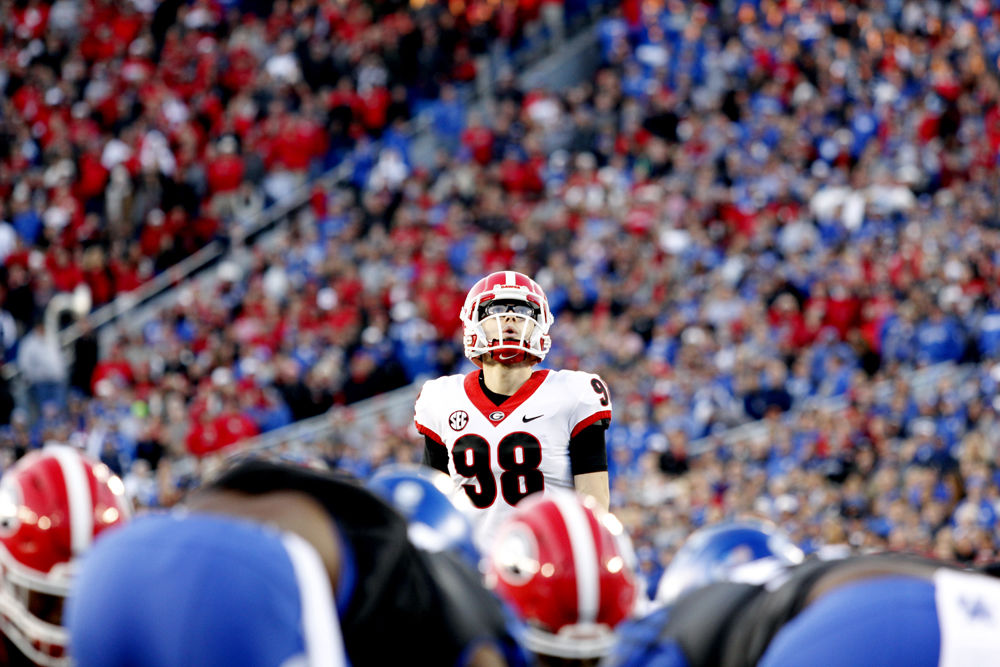 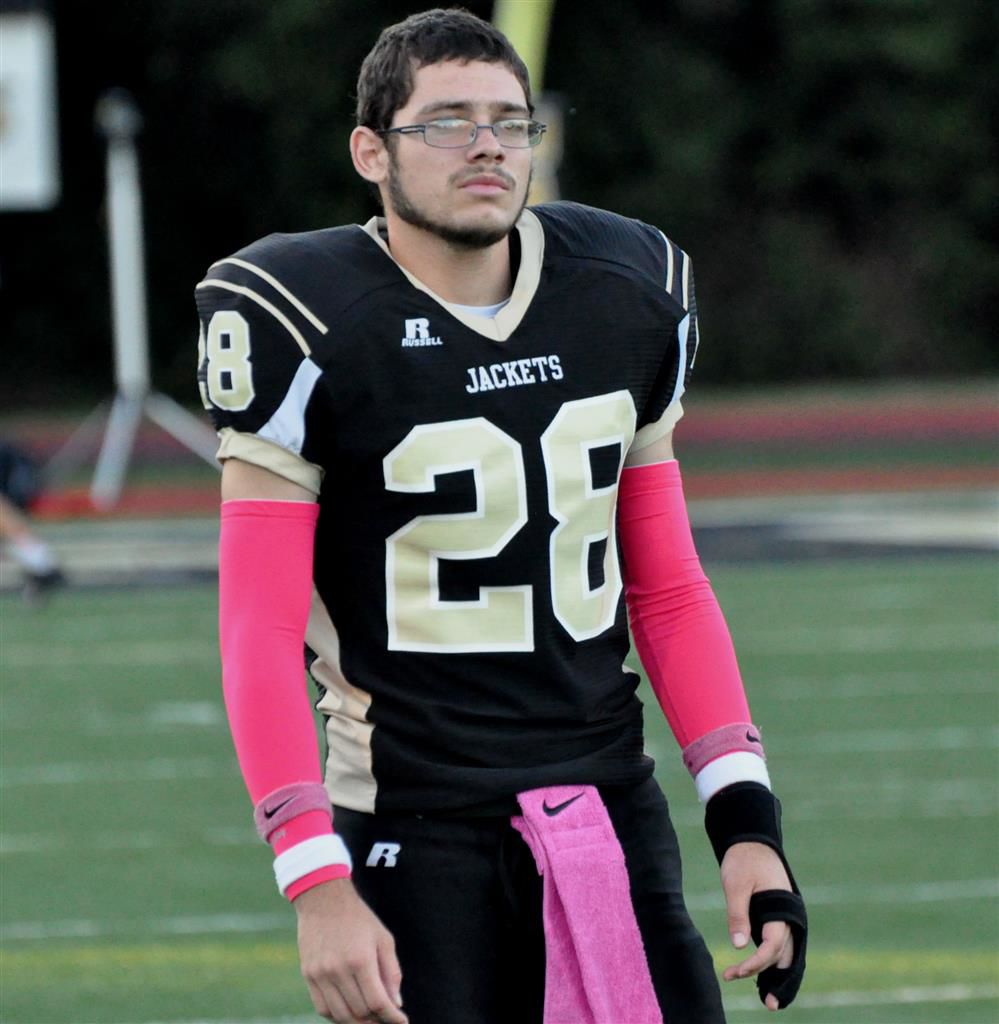 Rodrigo Blankenship during a game in 2014 when he was at Sprayberry High School. 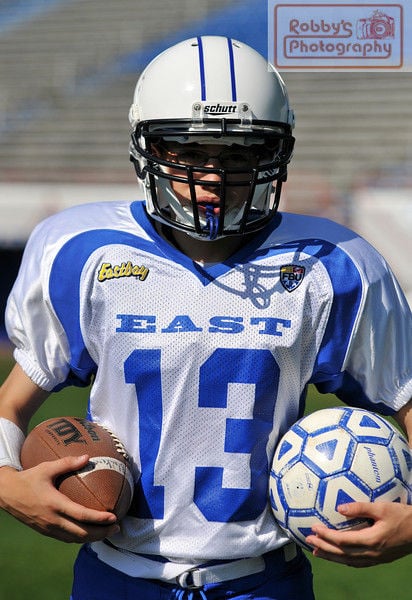 Rodrigo Blankenship poses in a football uniform with a football and soccer. 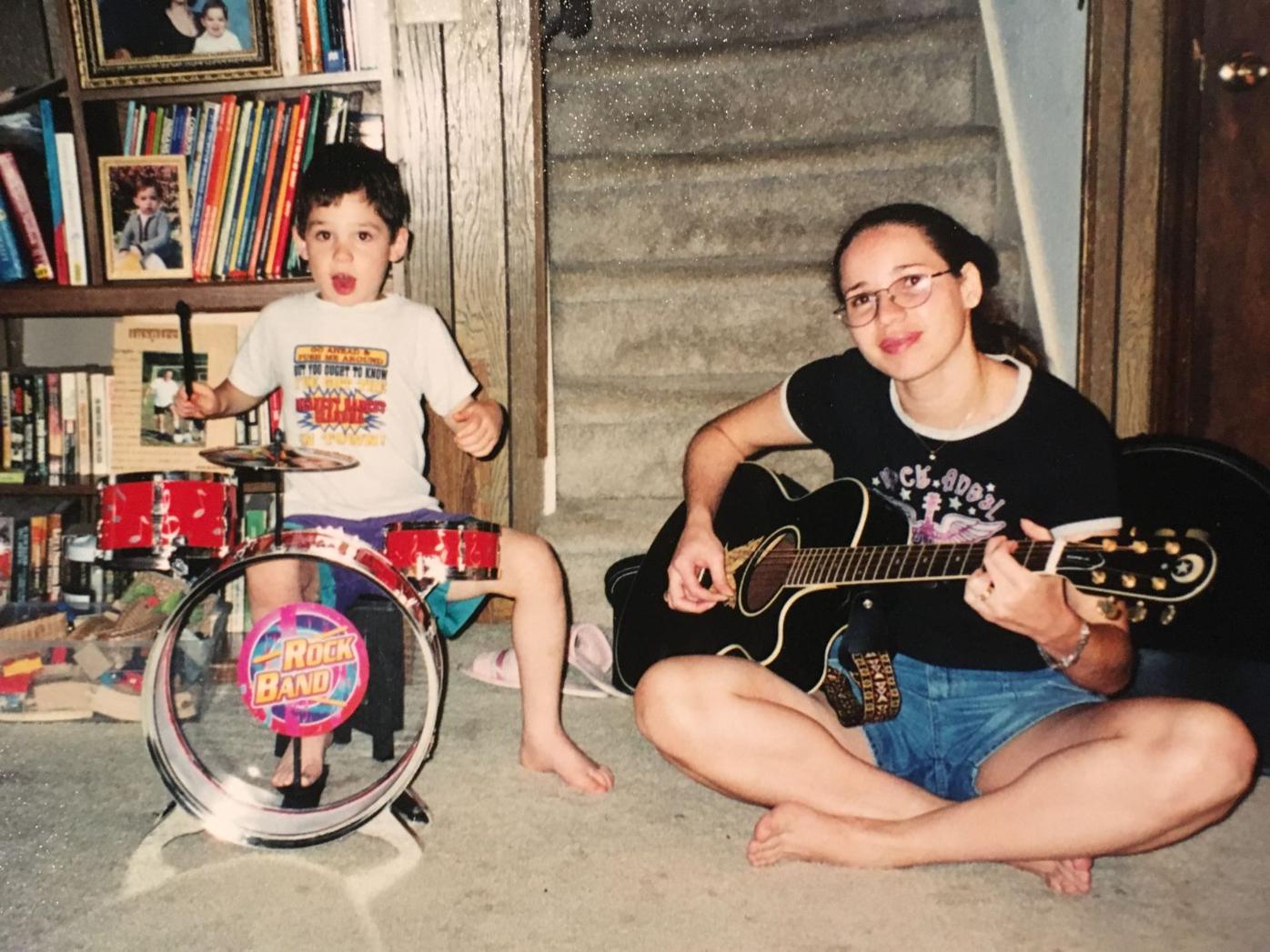 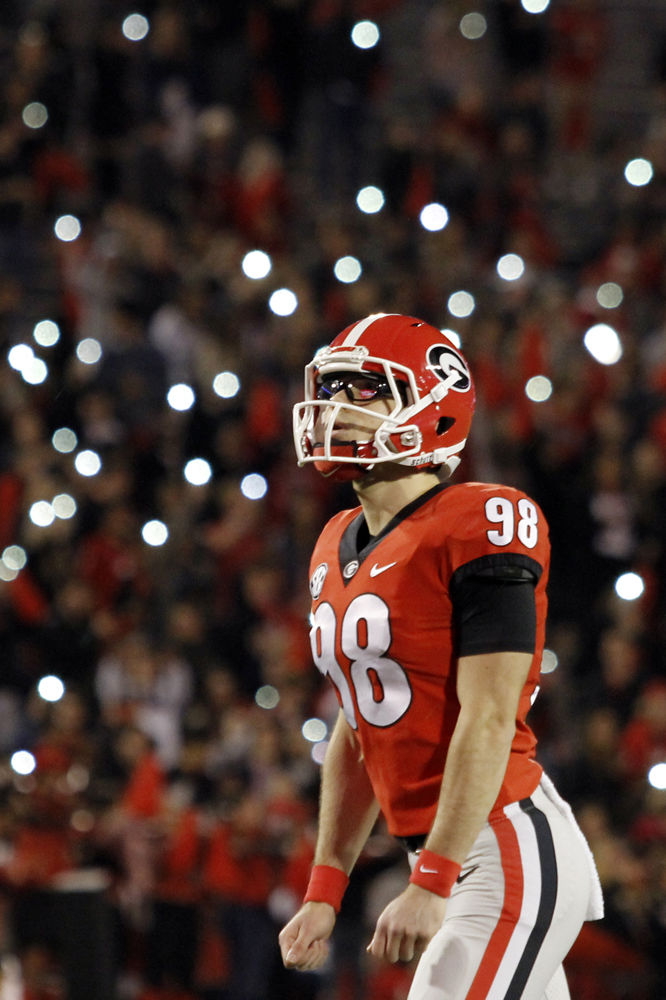 When Ken Blankenship saw his 10-year old son, Rodrigo Blankenship, kick a football for the first time, it began a long, work-filled journey that ended in affirmation.

At the time, Blankenship had no idea of his talent. His passion resided in soccer, and he played in leagues such as the North Atlanta Soccer Organization in his hometown of Marietta.

Blankenship was so good at soccer that his father would travel with him to Recife, Brazil, to train at soccer academies. His lineage traces back to that area through his grandparents on his mother’s side who live there.

“I thought it would be worth trying to make that evolve into something from that point on,” Ken Blankenship said.

Over 10 years, thousands of miles traveling to and from kicking camps and many football games later, Ken Blankenship is able to see the results of his son’s talents. Blankenship went 19-for-22 on fields goals in the 2018 regular season, and consistently kicks the ball in the back of the end zone on kickoffs for a Georgia team which finds itself in the SEC championship game for a second straight year.

When he looks back, Ken Blankenship isn’t surprised that his son is in the position he is today as a leader for Georgia and one of the top kickers in college football.

As Blankenship progressed through grade school, Ken Blankenship said he remembers looking off into the distance and imagining his son being where he is today.

“It’s never surprising, but it’s always impressive,” Ken Blankenship said. “I thought he was an outlier from the very beginning… He’s that good, and he works that hard.”

Growing up, he was artistic. He and his mother, Izabella Blankenship, would paint watercolor, acrylic and oil paintings at home. Izabella Blankenship played the flute in the choir at church. Blankenship tagged along, wanting to play the drums, so his parents bought him a drum set at Costco, and Blankenship received lessons from a family friend.

“He would [always] be next to me and want to do what I was doing,” Izabella Blankenship said. “He loved to play with things where he could use his hands.”

As time went on and his parents discovered his talent in soccer and football, Blankenship worked with his father on a daily basis. Ken Blankenship assisted in coaching the kickers for any team Blankenship was on for eight years, starting in fifth grade.

Each day, he gave his son a prescribed objective and workout schedule. There was always something to accomplish— a total or number to reach.

The relationship was player and coach on the field, and father and son off it. Despite the obvious personal connection, there was never really any issue in the relationship between the two.

“He’s a very good soldier,” Izabella Blankenship said. “You ask him to do something, he’ll do it.”

Soon, Blankenship developed his own prescribed workout. Not only did he follow his routine during the football season, he continued it through the summer and on holidays, never stopping for a vacation.

His soccer career continued until ninth grade. He was at the point where his talent was too good for his age group. With club teams, he was in the 15-and-under age group, but he played with 19-and-under squads. It became too much to juggle both football practice and traveling to the soccer field, so he turned his attention to football.

“Had he followed on a track for soccer, he would be just as dominant in that sport as he has evolved to be in football,” Ken Blankenship said. “He was a very gifted soccer player, and that’s we thought was going to happen.”

Blankenship and his family have lived in the same house in Marietta his entire life. He lived in the Sprayberry school district, but he was in the Walton School junior program. He played ninth grade football at Walton and then transferred to Sprayberry High School.

There, he began his football career with the Yellow Jackets and former head coach Billy Shackelford, who now holds the same title at East Paulding High School.

Shackelford remembers seeing Blankenship at an early age working with his father out on the field, kicking constantly. He motioned over to Ken Blankenship and expressed his concern, worrying that his father was over-kicking him. To his surprise, it was Blankenship who wanted to do the kicking, not his father making him.

“He’s a kid that has worked, fought and sacrificed for his skill set,” Shackelford said. “Honest to goodness, I’ve never seen a kid work as a hard as him.”

Blankenship’s work helped him become one of the top kickers in the country in the 2015 class. In games, when Sprayberry neared the short side 50-yard line, Shackelford would often elect to kick a field goal, knowing Blankenship had a good chance to make it from about any distance.

"He told us 'I want to go to Georgia. I want to be the best kicker Georgia has ever had.'"

He was so good with his kicks that Shackelford would let the team have fun with it, and even let Blankenship show off a bit.

All of his success led to many college scholarship offers. There were Division-I programs in conferences from all over the country, including the SEC.

Former Georgia head coach Mark Richt offered Blankenship a provisional scholarship. He would come to Georgia as a preferred walk-on and was promised a scholarship after Marshall Morgan, the kicker at the time, graduated.

After some consideration, Blankenship accepted Richt’s offer. After he went public, even more colleges offered full scholarships. But his mind didn’t change.

“He told us, ‘I want to go to Georgia. I want to be the best kicker Georgia has ever had,’” Ken Blankenship said.

In Blankenship’s first season at Georgia, Richt was fired, and not long after, current head coach Kirby Smart was brought in.

As a new head coach, Smart wasn’t able to honor Richt’s promise, but Blankenship remained at Georgia and eventually took over the spot at kicker after Morgan left the program. He didn’t have a scholarship, but his patience would soon be rewarded.

In 2017, when Blankenship was a redshirt sophomore, he hit a 30-yard field goal with 3:34 remaining to give Georgia a 20-19 lead against Notre Dame. The Bulldogs won the game by that score, and the post-game locker room scene included Blankenship proudly announcing to his team, upon a prompt from Smart, “I’m on scholarship,” followed by a roar of celebration.

“I think it shows a lot about who he is, the way he’s able to work hard and persevere for something that he really wants, that was obviously a goal of his,” said former Georgia punter Cameron Nizialek, who was Blankenship’s roommate for games in 2017. “He’s definitely a humble dude.”

Notre Dame wasn’t the game Blankenship emerged as a fan favorite. That moment was in 2016 after a game-winning field goal on the road at Kentucky. Two years later, in the same stadium, Blankenship’s parents realized how much their son’s fame had grown.

After home games, Ken and Izabella Blankenship wait for their son to shower and get dressed before meeting him at either Cali N’ Titos or Grindhouse for a meal. But the two experienced something quite different after the away game in Lexington, Kentucky, on Nov. 3.

Blankenship’s parents waited to meet their son, but, to their surprise, so was a crowd of fans, all standing in line to get a picture or an autograph. The line of people piled up to the point where Blankenship had to cut people off in order to make the bus in time.

“We had no idea there was that much fan loyalty or adoration, it was amazing,” Ken Blankenship said. “We have a much better perspective of how he is held in such high esteem.”

Off the field, Blankenship is pursuing a career in broadcast journalism, with a focus in sports. His love for sports was sparked at a young age because of his father. When Blankenship was around 10 years old, Ken Blankenship covered football games for the local paper, the Marietta Daily Journal.

Blankenship tagged along, and helped his father by texting in the scores of the games to the sports editor. Around the same time, Blankenship joined a baseball league with his dad, where he drafted teams and players and kept up with stats. He attended Atlanta Thrashers hockey games with his father every year thanks to season tickets his father shared with a friend.

“I guess he was just overwhelmed with exposure to all these different sports,” Ken Blankenship said. “He couldn’t play them all, so I guess he figured he could cover them and wanted to become a broadcaster.”

Most of all, Ken Blankenship is proud of his son not just as a kicker or for his career choice. He’s proud of the life he’s chosen to live.

“Rodrigo is leading a very blessed life through the grace of Jesus Christ our Lord and savior,” Ken Blankenship said.

Having been his head coach for two seasons, Smart has begun to understand what Shackelford understood in high school, what Ken Blankenship has always known about his son. Blankenship is extremely talented, but he also worked to get where he is.

Blankenship shares the sentiments of his coach, father and mother when reflecting on his journey to this point. But much like his father, he now has his own affirmation.

“I think that everything that has transpired over the past two years has been a result of me working as hard as I can and doing everything in my power to be the best teammate and asset to the team, day in and day out,” Blankenship said. “I think wanting to be the best kicker I can be for my team is what has driven me from the moment I stepped on campus.”

Blankenship ignited social media when he kept his helmet on throughout an on-field post-game interview after his game-winning 25-yard field goal against Kentucky in 2016.

Against Missouri on Sept. 22, Rodrigo Blankenship looked human after three games of perfection.

When Rodrigo Blankenship made an extra point in the third quarter of Saturday's game, he not only put Georgia up 28-6 but also put himself in the team's record books.

Crimson Tide Breakdown: A look at Alabama's offense ahead of the SEC championship game

The Alabama offense has been unstoppable this season. The Crimson Tide average 49 points a game, good for the second highest average in all of…

If you’re that one person in Athens who isn’t up-to-date on the Bulldogs’ season, you may not know that the big machine in red and black is he…

In front of a national audience on NBC, Terry Godwin made an insane catch, Georgia’s fan base took over Notre Dame Stadium and the Bulldogs escaped with a win.