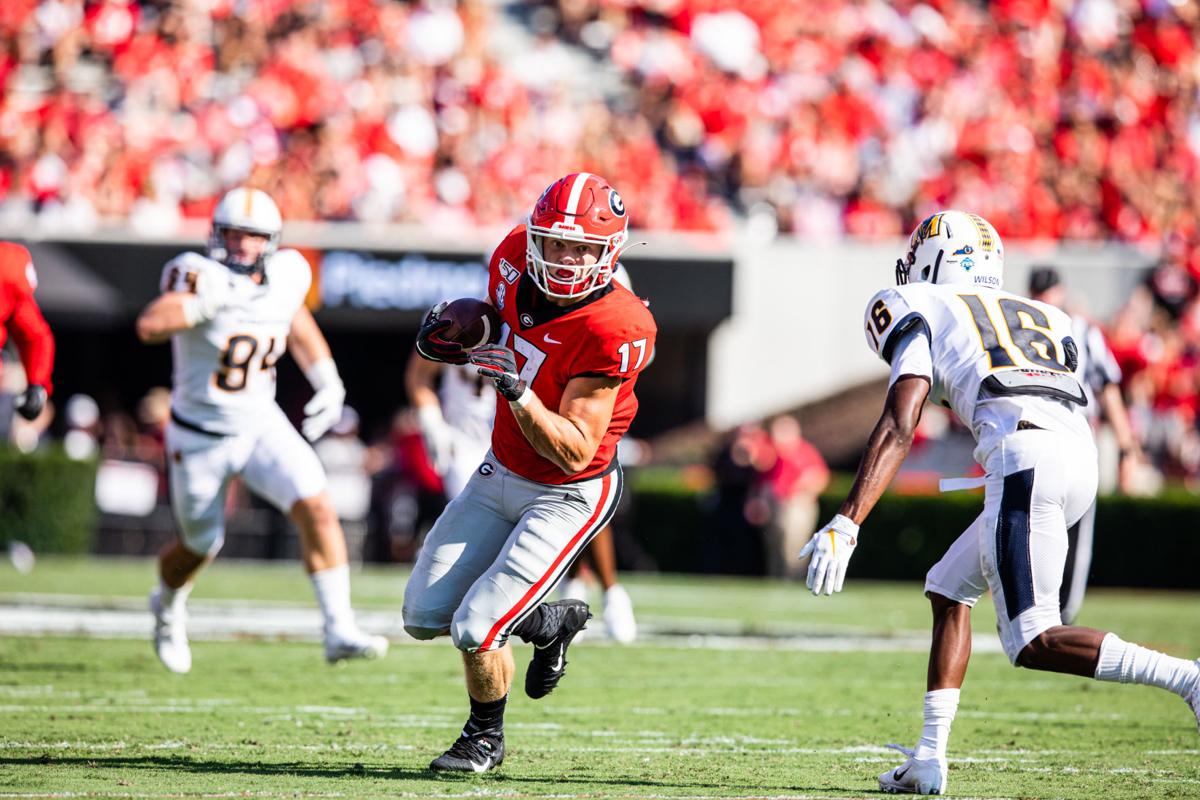 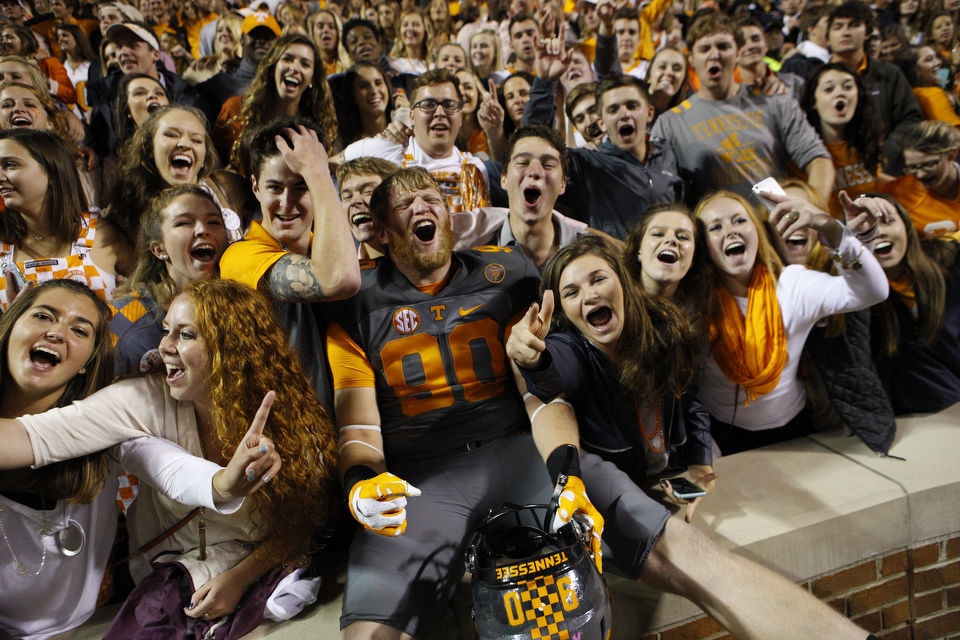 Eli Wolf grew up in Minster, Ohio — a town positioned almost directly between Columbus, Ohio, and Indianapolis. He was always a football fan but could never pick a team to pull for, despite living near powerhouses in both the NFL and college football. Wolf didn’t cheer for the Indianapolis Colts or the Ohio State Buckeyes. Instead, he rooted for close games and underdogs.

Wolf had his own underdog experience when he walked on at Tennessee in 2015. He was listed at 205 pounds as a 2-star prospect on 247Sports.

When he returns to Knoxville, Tennessee, on Oct. 5, Wolf won’t be as much of an underdog after four years with the Vols and a transfer to Georgia. He’s now 236 pounds and right where he wants to be in weight, playing on a team that’s favored by 25 points as of press time.

Wolf played football at Minster High School in Ohio and by his senior year was committed to play for Eastern Michigan. Later, he received the offer to walk on at Tennessee, but following the news, an unforeseen tragedy impacted his plan.

Wolf’s close friend and former teammate Austin Brackman was killed after being struck by a vehicle on Nov. 29, 2014. Wolf’s mindset was instantly changed.

“To see someone that close to him go so early, [Wolf] didn’t want to pass up any opportunity just because it might be a little harder,” Wolf’s older brother and former Tennessee teammate Ethan Wolf said.

Going to a school far from home wasn’t an easy choice, but Wolf had Ethan alongside him in the tight end room.

“You can only play football with your brother for so long and obviously with it being an awesome program like Tennessee, he didn’t hesitate,” Ethan said. “He took on the challenge.”

Wolf moved to Knoxville for his freshman year and redshirted soon thereafter. He played in six games the next year and nine the year following. In his final year, Wolf played in all 12 games with seven starts. He finished the season with five catches for 30 yards and a touchdown.

“Everyone talks about brotherhood in football but that was the most literal meaning of it,” Ethan said.

After four years at Tennessee and a year of eligibility left, Wolf made the decision to pick up his life and football career and take an opportunity in Georgia. Wolf became a graduate transfer for the Bulldogs in his final season.

Ultimately, Wolf felt like Georgia was a better fit for him as a player — and more specifically, as a tight end.

“Realistically, there was a position of need [at tight end],” Wolf said on Aug. 13. “Charlie [Woerner] and [John] FitzPatrick are both great tight ends. I felt like I could help the team along with those guys.”

Quarterback Jake Fromm and Woerner immediately invited Wolf to live in their house until he could find a home of his own so he could move out of a hotel.

“They let me look for a place with some other teammates, so it wasn’t long right after I got [to Athens] that it felt like family and everybody just kind of took me in,” Wolf said.

Wolf had met Fromm and Woerner on his first official visit to Georgia, and the pair took time out of their day that Sunday to show Wolf around the facilities.

“The transition has been smooth for him

because he’s bright, he picks things up, he’s smart,” head coach Kirby Smart said. “He’s got a lot of pride in knowing what to do, and that part he spent extra time on so that he could have an effective senior year.”

A new offense and a new beginning

At Georgia, Wolf had to learn a new offense. He said there were similarities between the Bulldogs and the Vols, but the terminology was the most difficult change.

Wolf said it took him extra time to adjust to the same words that now had different meanings, but the offensive coaches were patient.

“He’s really gelled with the team and the tight end’s room,” Fromm said. “He’s given us a lot of meaningful reps and done a great job of being the receiving tight end that he is.”

Wolf has caught seven passes for 98 yards this year.

Wolf’s battle with weight was another obstacle he now had to face again.

When he walked on at Tennessee, Wolf said there would be nights where he would set his alarm for 3 a.m. to eat a peanut butter sandwich.

“[Eating at night] probably made him feel like he wanted to throw up, but he just made sacrifices that people don’t really see outside of the game,” Ethan said.

Wolf said the weight room was a huge aspect of maintaining his strength, and the weight and nutrition staff at Georgia have helped him keep on the healthy weight.

This weekend, Wolf will return to Knoxville, and his brother will be there too.

“There’s no bad blood,” Ethan said. “I’m rooting for the Vols, but I hope Eli has a good game.”

As Georgia heads into a stretch of back-to-back conference opponents, the offensive line is relying on depth as its secret weapon.

Facts and figures can write plenty of narratives, but what sets Fromm apart is separate from the numbers. Praises for Fromm’s leadership ability echo from across the offense to the defense, and his high football IQ instills trust within his teammates.

SEC Power Rankings: Georgia remains in tier one as it travels to face Tennessee

3 reasons to watch Tennessee vs. Georgia

No. 3 Georgia is a heavy favorite over Tennessee, but there are still some reasons to tune in to the game.

4 numbers to know for Georgia's game against Tennessee

No. 3 Georgia will face Tennessee at 7 p.m. on Saturday night in Neyland Stadium. Here are four numbers to know before the game.

KNOXVILLE, Tenn. — No. 3 Georgia leads Tennessee 26-14 after the first half in Neyland Stadium on Saturday night. Here are some observations from The Red & Black:

No. 3 Georgia defeated Tennessee 43-14 at Neyland Stadium. Here are some observations from the Red & Black.