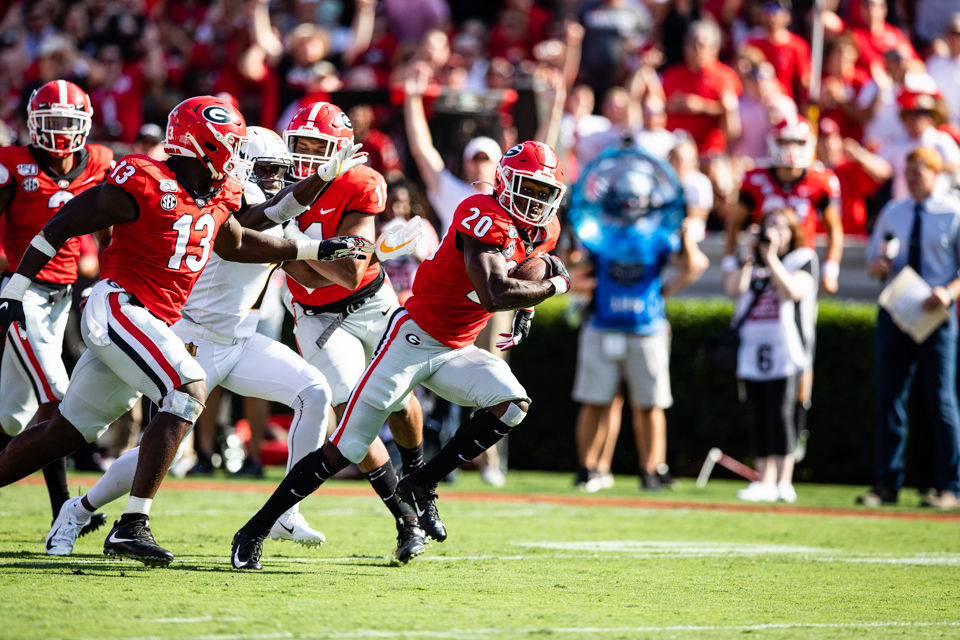 Georgia defensive back J.R. Reed (20) sprints away from a Murray State offensive player during the first half of Georgia’s home opener against Murray State University in Sanford Stadium on Saturday, Sep. 7, 2019, in Athens, Georgia. At the end of the half, the Bulldogs led the Racers 42-7. (Photo/Ryan Cameron, rcameron@randb.com) 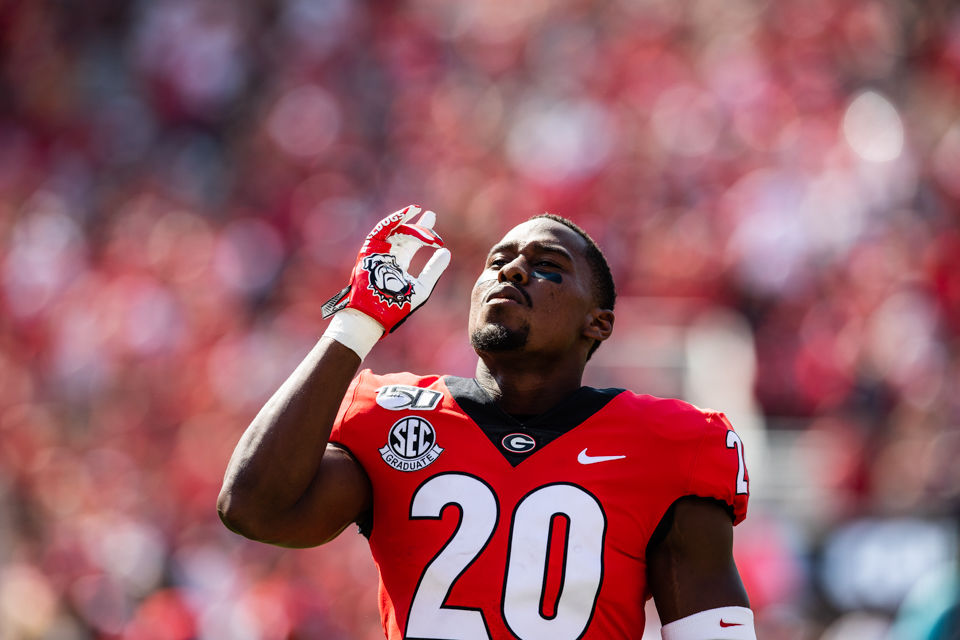 Georgia defensive back J.R. Reed (20) holds up his hand during the first half of Georgia’s home opener against Murray State University in Sanford Stadium on Saturday, Sep. 7, 2019, in Athens, Georgia. At the end of the half, the Bulldogs led the Racers 42-7. (Photo/Ryan Cameron, rcameron@randb.com)

After a Week 1 game against Vanderbilt in which they failed to force a single turnover and had just two sacks, the Georgia defense made up for lost production on Saturday against Murray State.

The Bulldogs finished with six sacks, 11 tackles for loss, an interception and a defensive touchdown in a blowout win over the Division 1-AA Racers in their home opener. Under first-year defensive coordinator Dan Lanning, the Georgia defense is making a point to create more ‘havoc’ plays on defense. Plays like tackles for loss, turnovers, sacks and others fall into that category, so it’s safe to say they were all good in the havoc department this week.

“We can always improve, but we did a good job,” senior safety J.R. Reed said. “I’m pretty proud of the havoc plays.”

Reed scored the Bulldog’s first defensive touchdown of the year when he picked up a Murray State fumble following a hard hit from defensive back Mark Webb and ran it 14 yards into the endzone for a scoop-and-score touchdown. Reed didn’t explicitly say touchdowns counted toward the havoc calculation, but it’s safe to assume the coaching staff was pleased.

“We show every defensive score in the SEC in our defensive meetings every week,” head coach Kirby Smart said. “The players love it because they want to be on that reel. Every defensive player’s dream is to score.”

Reed must enjoy it, seeing as tonight’s score marks the second defensive touchdown of his career, with the last one coming against Florida in 2017.

He said after the game that he didn’t even consider just hopping on the ball. He wanted to score.

“It’s amazing to score on defense because you don’t get it a lot,” Reed said. “I’m scooping it all the time.”

Elsewhere in the secondary, redshirt sophomore Latavious Brini snagged the first interception of his young career. Saturday’s game saw plenty of younger, inexperienced players get some extra reps due to the crooked scoreline, and Brini made the most of his.

It wasn’t just the secondary racking up the havoc points against the Racers. The new-look outside linebackers group left their mark on the game in the form six sacks, with five different OLB’s earning credit for at least a half-sack.

“Their tackles were back-pedaling a lot so it was more of a speed-rush kind of game,” outside linebacker Azeez Ojulari said. “We work on our pass rush every week in practice, so we just had to come out here and show what we’ve been working on.”

The edge-rusher position was a question mark for the Georgia defense this offseason with the departure of last years’ starters Juwan Taylor and D’Andre Walker. This largely inexperienced group played like a veteran unit against Murray State, and proved the quality and depth they have at the position going forward.

Of the five outside linebackers credited with a sack, only junior Walter Grant started any games last season. In fact, the team-leader in sacks with 1.5 on the afternoon was five-star true freshman Nolan Smith.

“One guy comes out, another guy comes in and they produce,” Ojulari said. “We just rotate whoever is fresh. We know everyone can play well.”

Smart said he was pleased with the overall defensive effort, but he acknowledged that his defense will have to do the same thing against much tougher opponents going forward.

Murray State was able to move the ball at times and put some points on the board thanks to a pass-heavy attack. Smart said he knew that’s what they were going to do and gave credit to the Racer’s offense.

“They’re a yards-after-catch team and we wanted to take that away from them,” Smart said. “They completed a lot of passes, but that’s who that team is.”

For Stetson Bennett and the rest of Georgia's backups, the Murray State game was an opportunity to get reps in a game.

No. 3 Georgia defeated Murray State 63-17 on Saturday at Sanford Stadium. Check out some observations from the game.

For young and inexperienced players, early games against weaker opponents are often the best chances to show what they can do when given some playing time.

Weekend roundup: What you missed from the weekend in Georgia sports

The fall sports season for Georgia athletics is in full swing. The Georgia football team defeated Murray State convincingly at home on Saturday, but that's not all that happened over the weekend.

Smart’s Soundbites: Georgia’s reputation at running back, the turnover situation and more

Kirby Smart met with the media on Monday ahead of Georgia’s game on Saturday against Arkansas State. He discussed Georgia’s rushing game and the strategies the team uses to prevent turnovers. He also provided injury updates on Isaiah Wilson, DJ Daniel and Julian Rochester.