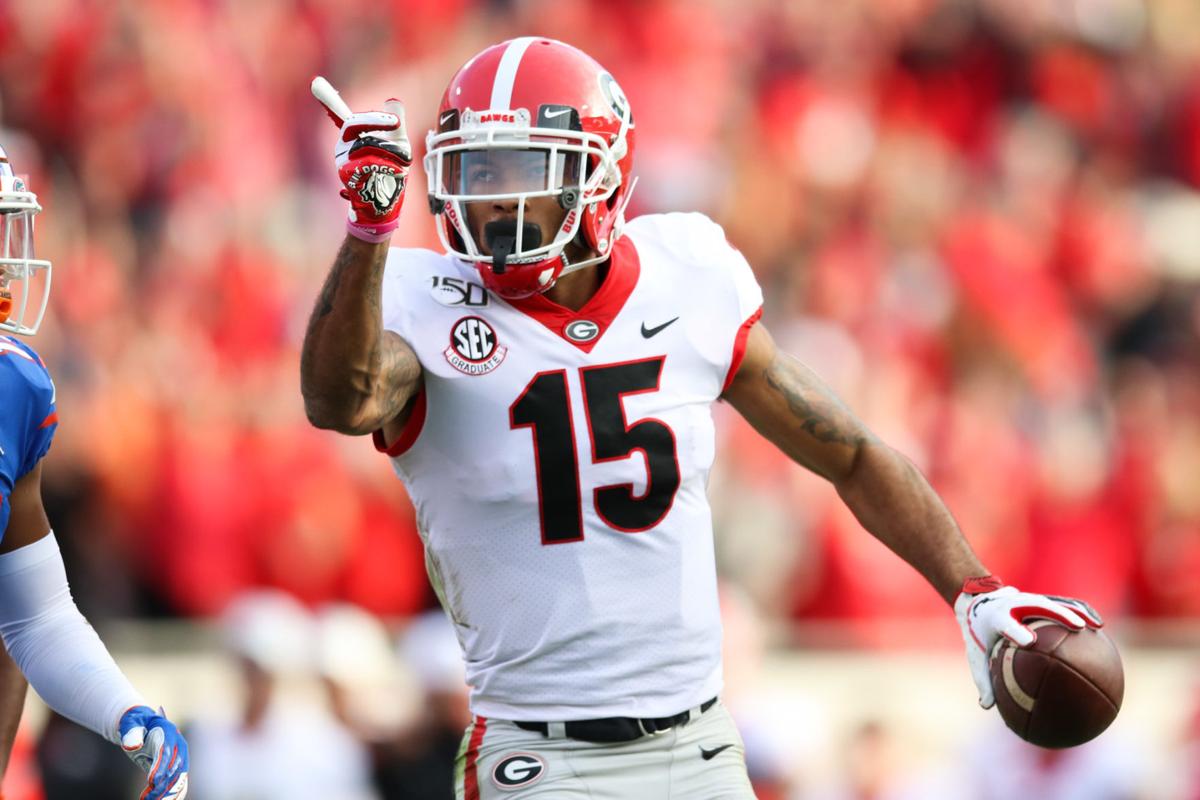 Georgia wide receiver Lawrence Cager (15) points while holding the ball. The Georgia Bulldogs ended the second half against the Florida Gators with a final score of 24-17 on Saturday, Nov. 2, 2019, in Jacksonville, Florida. (Photo/Gabriella Audi, https://gabbyaudi10.wixsite.com/mysite-1) 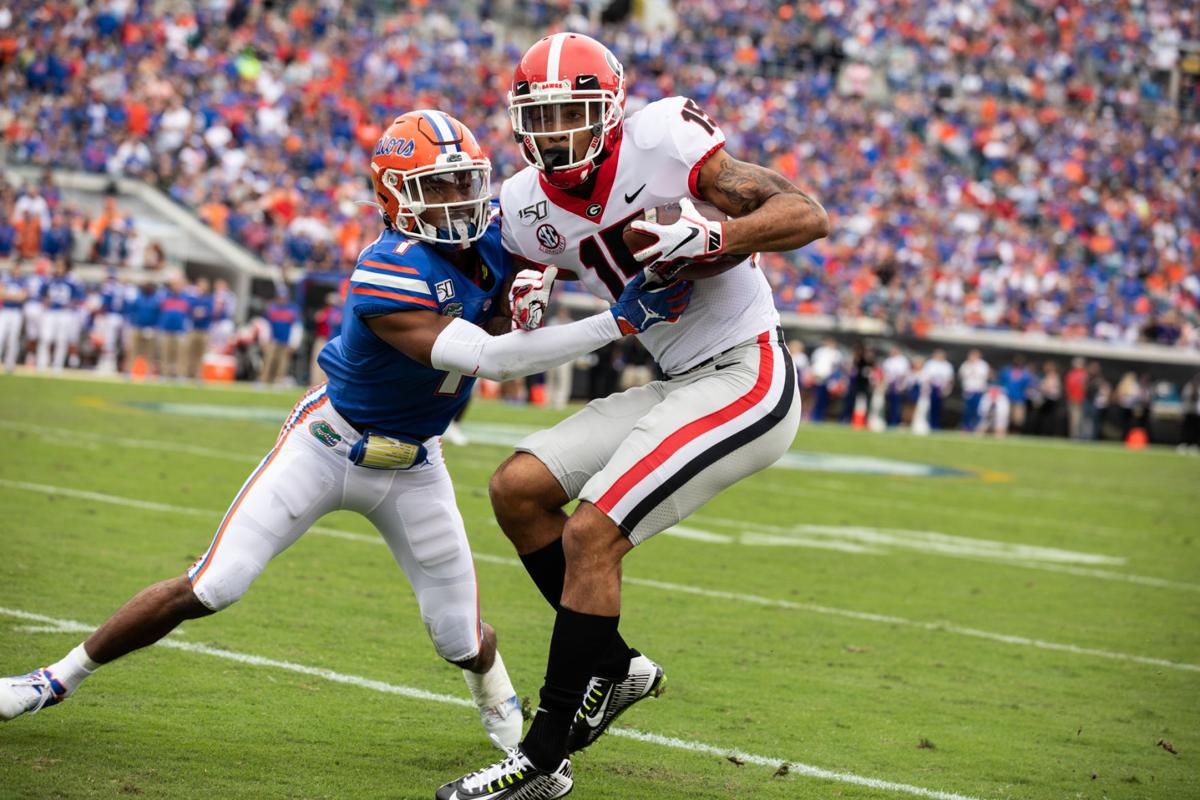 Florida defensive back CJ Henderson (1) attempts to bring down Georgia wide receiver Lawrence Cager (15).The Georgia Bulldogs ended the first half against the Florida Gators with a score of 13-3 on Saturday, Nov. 2, 2019, in Jacksonville, Florida. (Photo/Ryan Cameron, rcameron@randb.com)

JACKSONVILLE, Fla. — Lawrence Cager hadn’t practiced a play in nearly two and a half weeks. On Oct. 28, Cager posted a GIF of professional wrestler “The Undertaker” emerging from a coffin on Twitter.

After suffering shoulder and rib injuries in Georgia’s loss against South Carolina on Oct. 12, Cager couldn’t play against Kentucky on Oct. 19. His cryptic tweet after Georgia’s bye on Oct. 26 had no text and left Bulldog fans wondering what he meant.

Cager’s career-high performance in No. 8 Georgia’s 24-17 win over No. 6 Florida provided an answer on the field, but the wideout offered a more specific explanation of the tweet after the game.

And rise he did. Cager caught seven receptions for 132 yards and a touchdown on Saturday in Jacksonville.

“Every receiver dreams of an over 100-yard game in a great rivalry game,” Cager said.

Head coach Kirby Smart never doubted Cager would return against Florida, but he wasn’t sure what role the graduate transfer from Miami would be able to undertake. Cager had spent weeks running along the sidelines at practice and rehabbing.

Upon hearing Cager’s stats from Saturday, Smart was impressed.

Cager brought in Georgia’s most explosive offensive play of the game when he connected with Jake Fromm on a 52-yard touchdown pass — and a subsequent two-point conversion — that put Georgia up by two scores in the fourth quarter. Cager’s impact was also felt on third down, as three of his seven receptions kept drives alive for Georgia.

Cager leads all Georgia receivers this season with 26 receptions, 377 receiving yards and four touchdowns. Fromm obviously likes to throw to Cager, and the junior quarterback chalks much of their chemistry down to Cager’s 6-foot-5 height and high football IQ.

“For him to have this impact, I think it really says a lot about his character,” Fromm said. “He’s balling out, man. For him to come and do what he’s doing, it’s awesome for him [and] awesome for his future.”

Despite being a Baltimore, Maryland, native, Cager said he grew up watching the Georgia-Florida game every season. And on Saturday, he repeated multiple times that no injury was ever going to keep him from his only chance to play in it.

“I wasn’t going to miss this game for anything,” Cager said.

Statement performance: Georgia defense has game of the season in win over Florida

JACKSONVILLE Fla.— The Georgia defense has been one of the best in the country through eight games this season, and they solidified their position among the best on Saturday in Jacksonville.

Observations: No. 8 Georgia defeats No. 6 Florida 24-17 in Jacksonville

JACKSONVILLE, Fla. — No. 8 UGA defeated Florida 24-17 at TIAA Bank Field. Here are some observations from the Red & Black:

Like they never left: Georgia football right back in playoff contention with win over No. 6 Florida

No. 8 UGA defeated No. 6 Florida for the third-straight season with a 24-17 victory in Jacksonville, Florida. This time around, the Bulldogs revived their title hopes.

Every Sunday after a Georgia football game, The Red & Black will examine a key play from Saturday’s game. This week, we take a look at Lawrence Cager's 52-yard touchdown catch in the fourth quarter of the Bulldogs' 24-17 win over Florida.

Georgia football head coach Kirby Smart met with the media on Monday to preview the Bulldogs’ game on Saturday against Missouri. He talked about how the Bulldogs plan to move forward after the Florida win and gave an update on the status of Tyson Campbell.