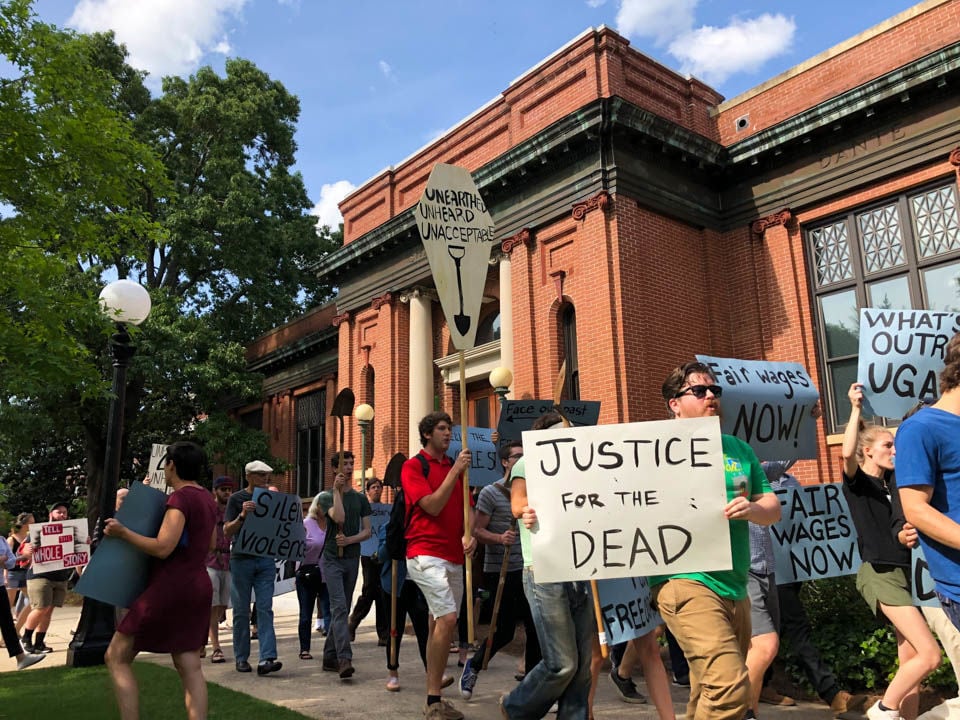 Protesters walk across the University of Georgia’s north campus to bring awareness to the slave remains found underneath Baldwin Hall on Monday, May 6, 2019, in Athens, Georgia. (Photo/Spencer Donovan) 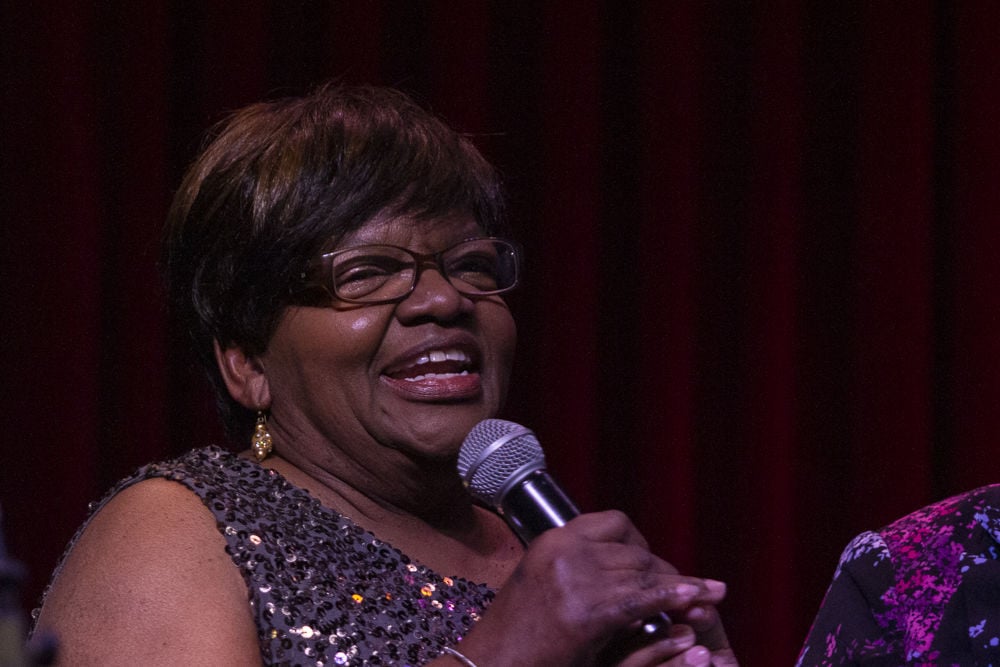 Linda Davis has been outspoken about the University of Georgia's handling of the slave remains unearthed at Baldwin Hall during a 2015 construction project. (Photo/Rebecca Wright)

The University of Georgia has issued a call for faculty research proposals studying slavery from 1785 through the end of the Civil War in 1865, according to a UGA news release.

“The new scholarship that results will document the contributions of slaves and recognize the role these individuals played in the history of the University of Georgia,” UGA President Jere Morehead said in the release.

A maximum of $100,000 in private discretionary funds from the Office of the President will support the selected projects, which are slated for completion by June 30, 2021. Proposals can be submitted online, and the deadline is Sept. 30.

The research proposal comes months after Athens community members, UGA students and faculty pressed Morehead and the UGA administration to acknowledge the university’s history of slavery, especially regarding the slave remains unearthed at Baldwin Hall in 2015.

Linda Davis, a Clarke County School Board member and one of many Athens community members who has spoken out about the Baldwin Hall remains, also works to restore Brooklyn Cemetery, a historic African American cemetery that suffered from years of neglect after the members of the previous cemetery board of trustees died.

Davis believes some of the Baldwin Hall remains could have belonged to her ancestors, and, if proven, she wants UGA to reinter those remains from their current location in Oconee Hill Cemetery to Brooklyn Cemetery. She sees the research initiative as an opportunity for UGA to come to terms with its history regarding slavery.

“There are folks that have lived in this community for generations … for the research to be truly comprehensive it would be open to review by those stakeholders,” Scott-Blackwell said.

UGA on the defense

Morehead has defended the university’s handling of the situation multiple times. The Athens community and the UGA administration have been at odds since the slave remains were uncovered at Baldwin Hall.

“The University of Georgia handled the Baldwin Hall matter appropriately, and our response actually went far beyond what is required by the law,” Morehead said in a letter to The Red & Black in April.

Everything you need to know about the Baldwin Hall controversy

On April 10, Athens activists and community groups called on university administrators to guarantee reparational scholarships to descendants of slaves who worked at the university and to African-American public school graduates in Athens, in addition to supporting slavery research.

Around the same time, the Franklin College of Arts and Sciences Faculty Senate Ad Hoc Committee on Baldwin Hall released a report in April alleging UGA intimidated faculty members who conducted slavery research. Morehead denied the findings of the report, saying the allegations were “troubling from the standpoint of due process and fundamental fairness.”

UGA archaeologists and Southeastern Archaeological Services, a contractor, studied the remains uncovered at the Baldwin Hall site, and the UGA Office of University Architects released the ensuing 826-page archaeological report in May.

“The [Baldwin Hall] report demonstrated the need for additional research to fill a void, and it is our hope that faculty and students from several disciplines will participate in this significant research initiative,” UGA vice president for research David Lee said in the Aug. 7 release.

The release said proposals should build on previous research to culminate in “one or more definitive, publishable histories” on the university’s relationship with slavery.

“If we can just tell the whole story, it starts to change things for the marginalized and the underrepresented people in this community,” Davis said. “To recognize that you have a place in the creation of something is really significant, and you can take pride in something that’s survived and something that’s strong.”

UGA did not mention a “center” for slavery research, which was part of the activists’ request to support faculty projects. A group of professors from the UGA Institute for African American studies and the UGA History Department have proposed the funding of a centralized body of slavery research.

The University of Georgia Office of University Architects released the final archaeological report of the study of likely slave remains unearthed at Baldwin Hall during a 2015 expansion project.

Linda Davis has relatives buried in Brooklyn Cemetery — her grandparents, born into slavery — but she doesn’t know exactly where they are. The names on the grave markers were lost from years of neglect.

When Davis returned to Athens after over 25 years living elsewhere, she recognized how overgrown the cemetery had become. For many living in Athens, the gradual process went unnoticed.

In the midst of heavy rain showers on May 4, one Athens resident, Fred Smith Sr., marched across the grounds of Baldwin Hall at the University of Georgia, in silent remembrance of the 105 bodies discovered underneath the building in 2015.

The Coalition for Recognition and Redress requested a meeting date be set with Morehead and a representative of the University System of Georgia Board of Regents on April 29. Coalition leaders were told they would have a response within two to three business days, but UGA has not yet responded to their request.

The Coalition wanted the meeting to discuss its demands of the UGA administration, including that UGA acknowledge its history of slavery.

Community members, activists, UGA students and faculty march for ‘recognition and redress’ of slavery at UGA

About 60 people marched from Tate Plaza through North Campus to protest outside the UGA Administration Building. The protest was against the university administration’s response to demands for UGA to acknowledge its history of slavery.

The Athens Coalition for Recognition and Redress held its first community event regarding the remains uncovered during an expansion project at Baldwin Hall on the University of Georgia campus in 2015. Local activist groups such as Athens for Everyone and United Campus Workers of Georgia comprise the coalition.

This semester brings more tweaks to the UGA bus routes. Here’s a summary of “route optimization” changes that Transportation and Parking Servi…

Athens-Clarke County Police Department, University of Georgia Police Department and other local law enforcement agencies will not arrest people suspected of marijuana possession until new THC testing equipment is available because hemp, marijuana's cousin, was legalized in May.

GUEST COLUMN: UGA must address its history of slavery

UGA has made progress in addressing its history of slavery, but there is still much more to be done. That all starts with paying workers a fair wage and working with the Athens community.

On Sept. 17, Franklin College of Arts and Sciences Faculty Senate discussed resolutions calling for University of Georgia President Jere Morehead to apologize to descendants of the people whose remains were unearthed at Baldwin Hall in 2015 and other actions regarding the Baldwin Hall controversy.