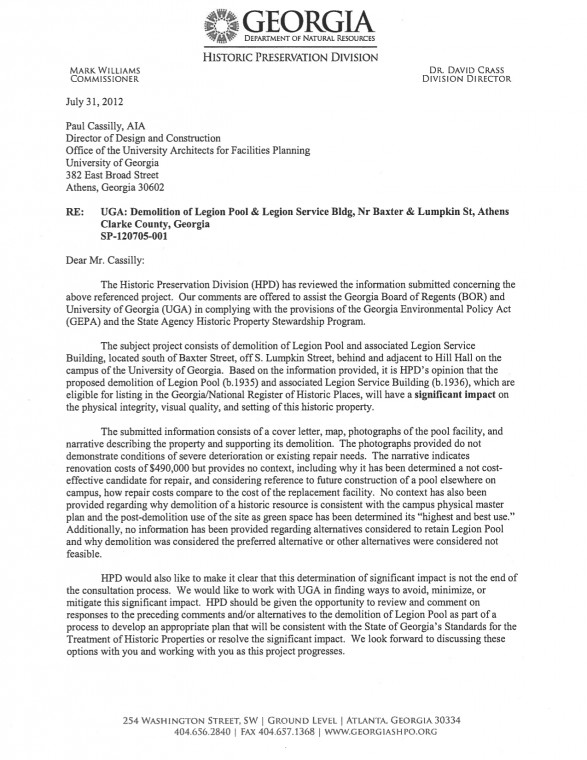 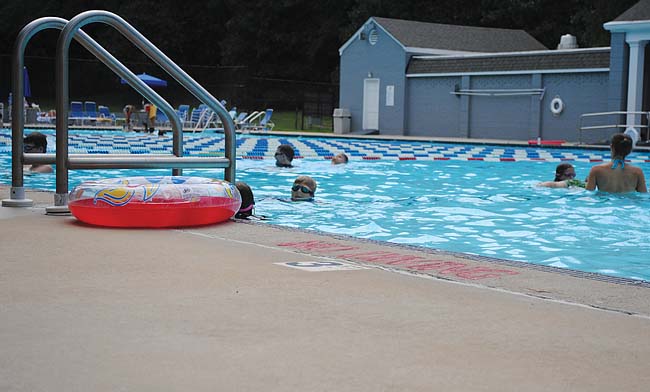 As Legion Pool opens for the summer, while other UGA landmarks undergo construction, it is safe again from destruction.

As Legion Pool opens for the summer, while other UGA landmarks undergo construction, it is safe again from destruction.

A month after the University requested an expedited review from the Georgia Historic Preservation Division to raze historic Legion Pool, the HPD responded this week with a message of its own: Not so fast, UGA.

"HPD's opinion that the proposed demolition of Legion Pool (b.1935) and associated Legion Service Building (b.1936) which are eligible for listing in the Georgia/National Register of Historic Places, will have a significant impact on the physical integrity, visual quality, and setting of this historic property," Division Director David Crass wrote to University's Director of Design and Construction W. Paul Cassilly. "We would like to work with UGA in finding ways to avoid, minimize, or mitigate this significant impact."

Cassilly's letter written June 26 cited the pool's “physical obsolescence, including compromised structural conditions that contribute to significant daily water loss” as reasons for its destruction. But Crass countered the items he received from UGA "do not demonstrate conditions of severe deterioration or existing repair needs . . . Additionally, no information has been provided regarding alternatives considered to retain Legion Pool and why demolition was considered the preferred alternative."

UGA is seeking the OK to raze the pool from the state Board of Regents during the board’s upcoming August meeting.  UGA officials say the cost to renovate Legion Pool is $490,000, while the cost to demolish it is $207,600. A proposed pool, half the size of Legion, would be built aside Lake Herrick at the Intramural Fields for a cost of $2.6 million.

Legion Pool is closing for the summer on Aug. 10.

Once demolished, the area where the Legion Pool is now will become campus green space as part of the University's Master Plan, which includes building more on-campus housing in that part of campus.

Legion Pool was built in 1935 by a federal government grant under the Works Progress Administration. It was operated by the city of Athens until it was purchased by the University in 1954. There have been several renovations to the pool, with the most recent coming six years ago when the plastic sections along the expansion joints were re-patched and refinished.

There has been an increased local push to retain the pool since news broke of its proposed destruction. Residents Kathy Prescott and Grady Thrasher wrote a letter to the HPD in opposition of UGA's plans and have helped to push a petition opposing its destruction. More than 700 people have signed so far.

"We, the undersigned, are but two of what we believe are hundreds, perhaps thousands, of citizens of the Athens, Georgia community who view Legion Pool, the public outdoor swimming facility on Lumpkin Street, as not only a significant historic landmark, but as an ongoing valuable and viable community asset that deserves (and we believe the Georgia State Agency Stewardship Program established by Georgia Code 12-355 requires) protection and preservation by its custodian, UGA, not demolition as UGA would prefer, Thrasher and Prescott wrote. "We therefore urge that your department’s review conclude that UGA’s request to demolish Legion Pool is not consistent with the intent of the State Agency Historic Preservation Stewardship Program and applicable law, and that further inquiries and public hearings be held regarding the protection of this historic treasure of our community."

In June 2011, UGA wrote a similar letter to the HPD requesting the demolition of Rutherford Hall. Rutherford was a candidate for inclusion on the Georgia and National Registers, but despite resistance from the state HPD at that time, demotion was approved by the Regents and Rutherford was razed in June. A new, 260-bed Rutherford Hall is expected to be open for the fall 2013 semester.

Letter from UGA about Legion Pool.pdf

The University's request to build a new pool aside Lake Herrick, tear down Legion Pool, renovate Oglethorpe House and up the budget for improv…