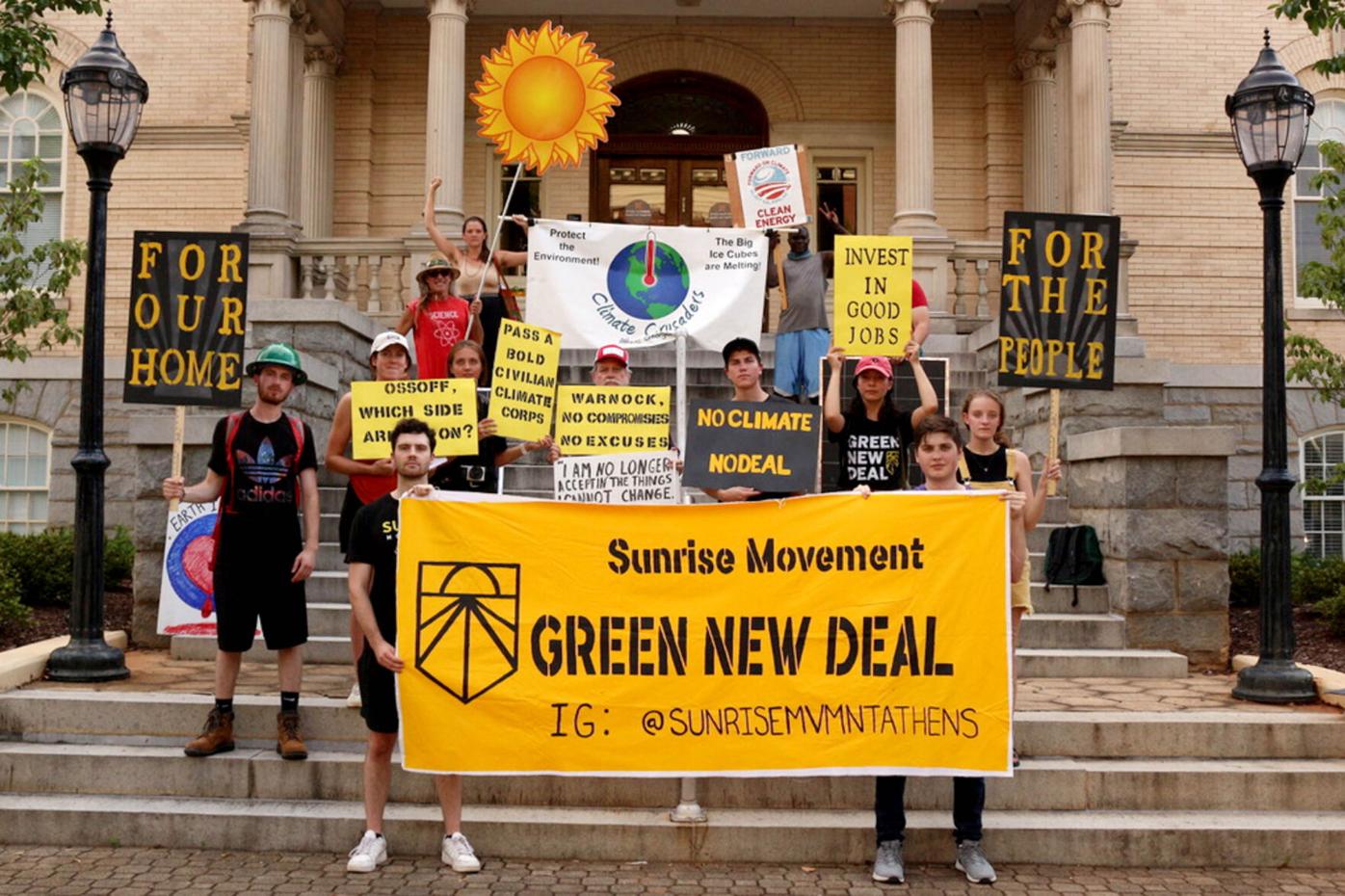 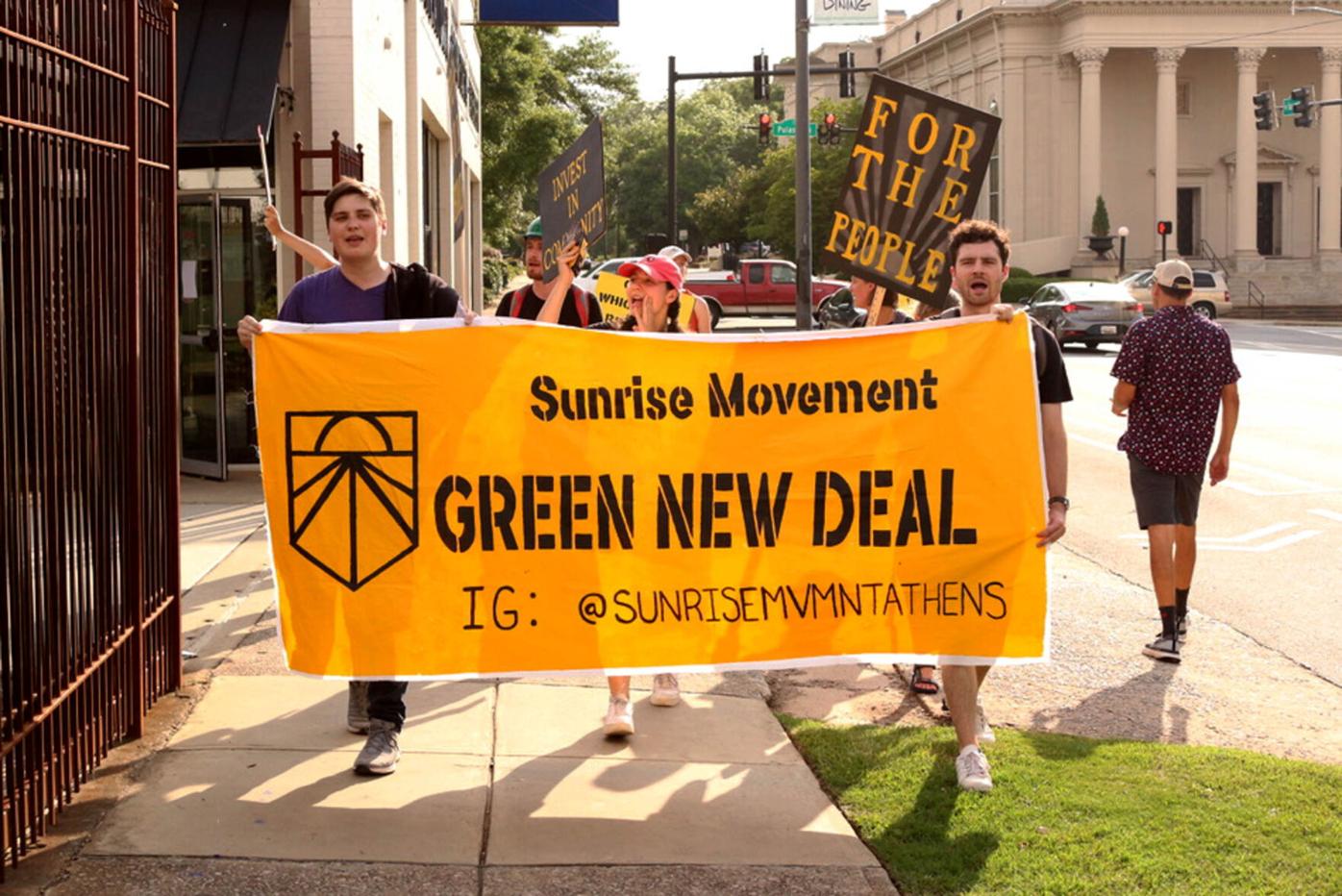 Protesters hold up a large banner on July 15, 2021, in downtown Athens, Georgia. The Sunrise Movement, a nationwide youth-led initiative to stop climate change, teamed up with the Georgia Climate Coalition to demand action from elected officials. (Photo/Aynur Rauf; AynurRauf1@gmail.com)

The Red & Black publishes opinions from a number of contributors and staff columnists. Their opinions do not reflect the opinions of the editorial staff. The editorial staff is in no way involved with the opinion pieces published with the exception of editorials. Editorials are written by the editorial board consisting of the opinion editor, managing editor and editor-in-chief. Editorials are clearly marked EDITORIAL at the beginning. This article is from guest columnist David Weber, a graduate Forestry and Natural Resources student at UGA. He is a coordinator and spokesperson for the Sunrise Movement Athens hub.

Sometimes, it feels like the world is on fire. The West is literally in flames and Athens is getting hotter. We've made it through a year of a global pandemic and a deep racial reckoning, and I don’t know how I’m going to get a job amidst the chaos when I finish graduate school at the University of Georgia.

As a young person, I often feel overwhelmed by these intertwined issues of our changing climate, gross displays of racial injustice and the prospect of finding a good-paying job in an economy that seems to work for the wealthy rather than people like me.

Sometimes I think these problems are so big and the powers responsible so formidable that ordinary people have no chance of fighting for a better future.

I want my country to be better, and I’m tired of feeling helpless. That’s why I helped coordinate a demonstration on July 15 with the Sunrise Movement, a national youth movement to fight climate change and create millions of good, green jobs. We demand that our elected leaders start working for us and meet this moment with the action and intensity it requires.

The Athens hub of the Sunrise Movement marched from the Arch to City Hall. We chanted and spoke to people along the way, publicly calling on Sens. Jon Ossoff and Raphael Warnock to be bold for us and take strong action on climate and work towards a Green New Deal.

Alex Monroy, founder of the Athens hub and a fifth-year environmental health science major at UGA, shared the story of how her own family had to endure below freezing temperatures without power or heat this past winter in Texas. The state had not adapted its energy infrastructure for unusual weather events, and the consequences were deadly.

Climate change threatens our homes and our way of life. That’s why we are calling for a visionary program that would give people of all ages an opportunity to serve their communities and their country by addressing the twin crises of climate change and economic inequality: the Civilian Climate Corps.

What the CCC can do

The CCC is inspired by one of Franklin D. Roosevelt’s signature New Deal programs, the Civilian Conservation Corps. The original CCC was a national public work relief program that employed over 3 million workers during the Great Depression to build, repair and conserve the United States’ forests, parks and natural resources.

However, Roosevelt’s CCC had some deep flaws. The Corps only employed men and was racially segregated, and it also undertook nonconsensual development on Native American land. To succeed this time around, the modern Civilian Climate Corps must be deeply rooted in equity and justice and be brave enough to face the scale of the crises of our time.

The new CCC could prioritize giving good jobs to communities who have been disproportionately harmed by the climate crisis, systemic racism and our broken economy.

The CCC that we are fighting for would, if fully-funded, employ 1.5 million people over five years, pay a minimum salary of $15 per hour, include full health care coverage and provide career pathways through education, vocational training and partnerships with unions. To compete for employees, private employers would need to improve their wages, benefits and conditions, effectively raising the baseline for workers across the country.

I can only begin to imagine the good this could do for our community here in Athens. There could be CCC projects to create and improve biking and walking trails in our parks, plant native plants downtown that benefit pollinators and birds and better protect the Greenway from flooding.

Projects would be coordinated in consultation with community leaders to best meet the needs of the community. It could also include things like distributing fresh produce in food-insecure areas, taking care of the elderly and so much more.

Democratic lawmakers are currently negotiating a major budget deal that would include a Civilian Climate Corps. Senate Majority Leader Chuck Schumer has already come out in support of a “big, bold CCC."

We have a once-in-a-generation opportunity to confront the climate crisis and create millions of middle-class union jobs.

Creating a new Civilian Climate Corps is a key step.

However, the road ahead won’t be easy, with some senators, including West Virginia Democrat Joe Manchin, taking the side of their oil and gas lobbyist buddies and opposing the urgent transition away from fossil fuels that we need.

So to our elected leaders in Congress, I say this: Remember your commitment to serve the country and communities you represent. Give Athens and all of Georgia a more sustainable, more equitable, more prosperous and more beautiful future by investing in a bold Civilian Climate Corps.

By allowing the public and private sectors to pass the buck on substantial climate policy, nongovernmental organizations are a distraction.

OPINION: Bezos does not need space funding, NASA does

Space travel is possibly our species’ greatest feat, and it should not be beholden to quarterly reports.

OPINION: Engineers must speak up before disasters strike

If engineers spoke out about the need for repairs in Surfside, the community could have asked to fund them before tragedy struck.

GREEN GEORGIA: Georgia, Athens could be poised to lead in solar energy

Despite the fact that there are no solar power mandates in Georgia, the industry is booming.

GUEST COLUMN: Young people are starving themselves for climate action. I joined them.

I felt delirious and weak, yet this was nothing compared to what would happen in a catastrophic climate scenario.

If someone does not have the money to take an unpaid internship, they’ll resort to finding work that pays immediately, which might not open the same doors long-term.