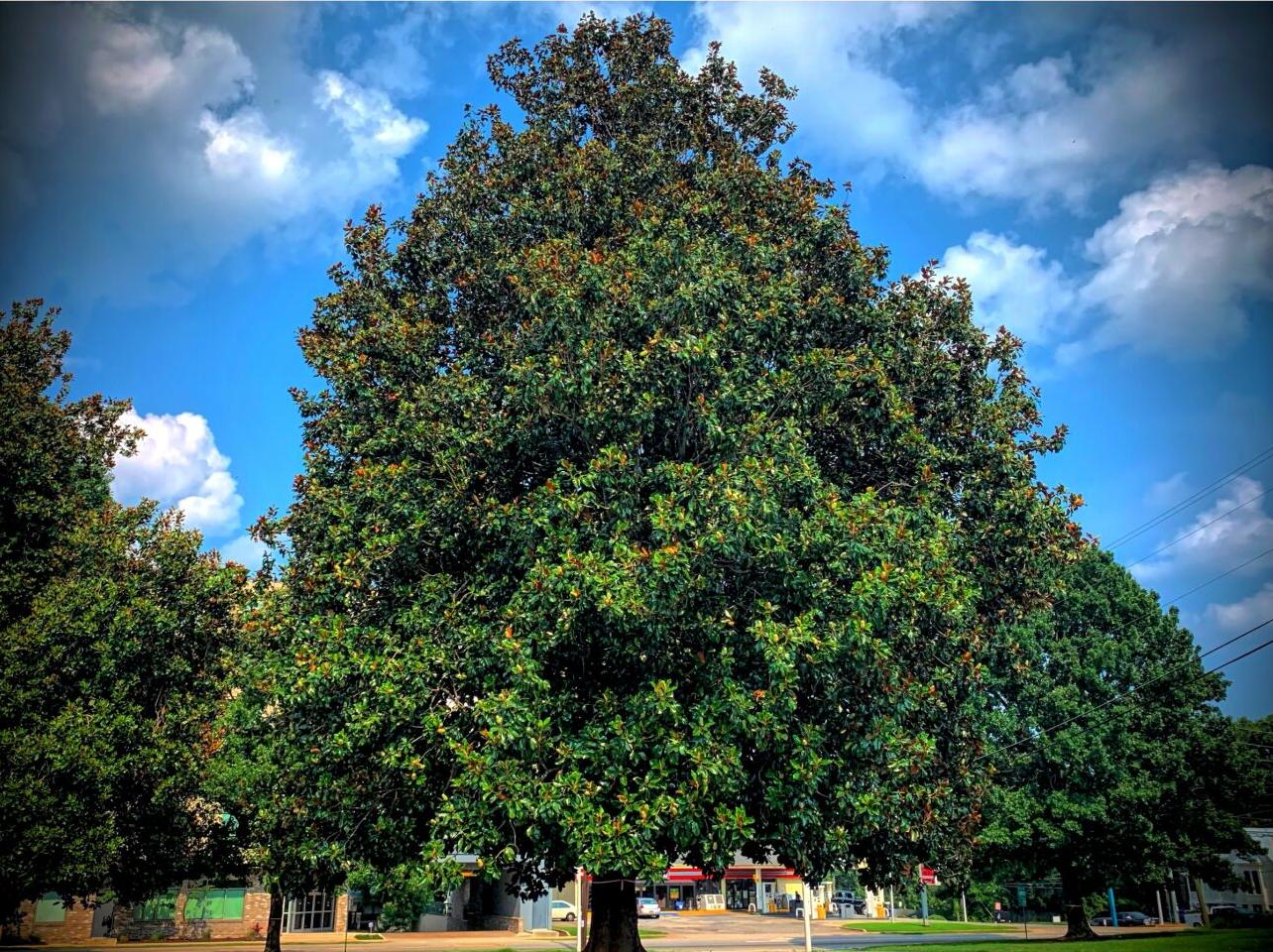 These trees watched its residents fight through blood, sweat and tears for equal rights among all genders and races. (Photo Courtesy/ Nicole Isaac) 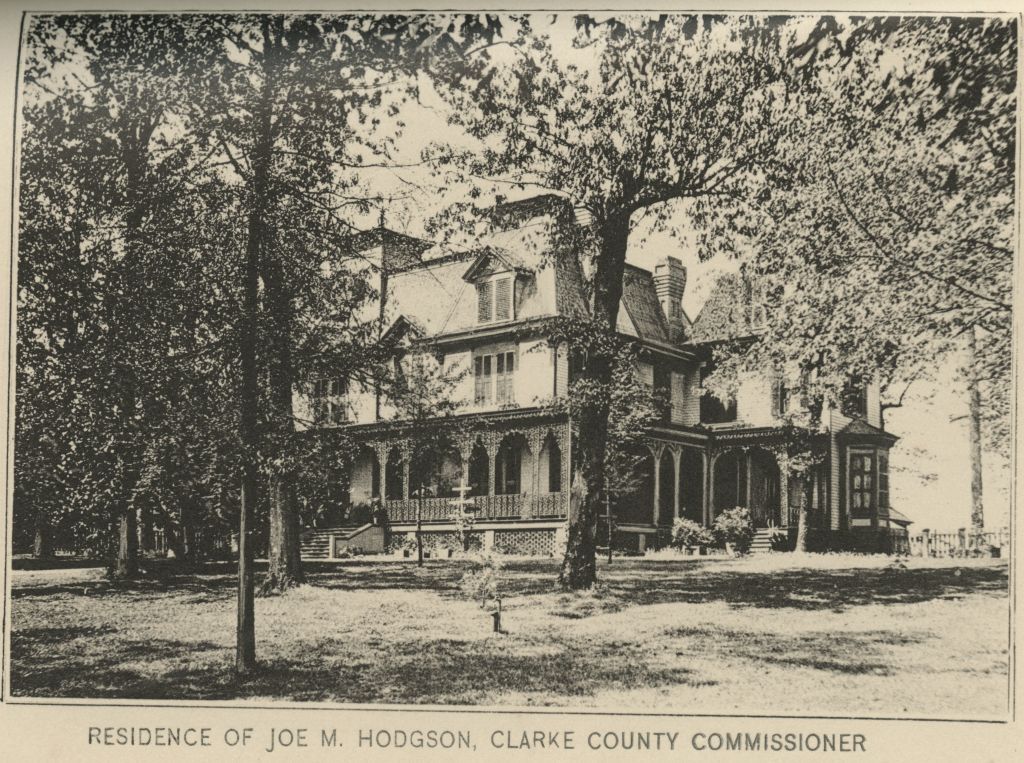 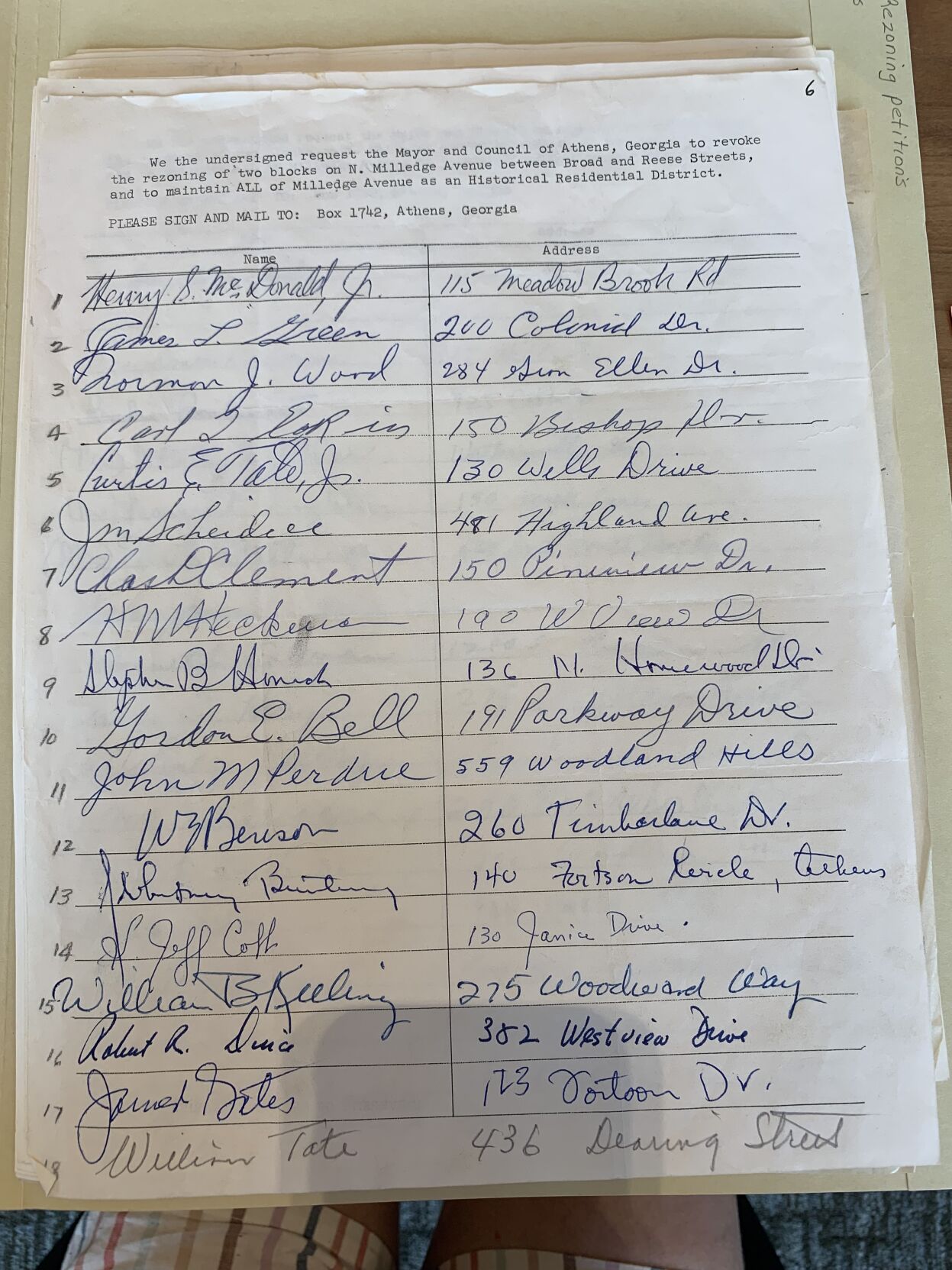 A petition by the Society of the Preservation of Old Athens and the Athens Historical Society to revoke the rezoning of the Reese Street Block. (Photo Courtesy/ Nicole Isaac)

This Save The Trees column is the first in a two-part series by Nicole Isaac, a freelance writer and journalist from Athens. More of her work can be found at The Southern Belle-Jar.

“Look to the past as a means of weighing the present and future.”

This quote is stenciled on the front entrance to the University of Georgia’s Richard B. Russell Special Collections Library, credited to Russell himself.

I spotted it on my way out after spending hours holed up on the third floor reading room combing through boxes of old records pertaining to a specific address: 1000 West Broad Street/125 North Milledge Avenue, also known as the historic “Reese Street Block.” Between 1963 and 2021, this marked the location of the famous Varsity Restaurant in Athens.

For those 58 years, the fast-food chain shared the six-acre parcel with majestic old-growth magnolias, pecan trees and water oaks. But now, with the Varsity being demolished, the survival of these trees hangs in the balance because of future development.

Landmark Athens restaurant The Varsity set to be demolished

These trees’ past doesn’t begin with the Varsity. It spans over two centuries, to a time when an obscure rural mill town along the Oconee River had just been tapped as the future home to the nation’s first state-chartered university.

According to local lore, Leonidas Franklin had a wagon sent to South Georgia to retrieve seedlings of the lush magnolias of her childhood. Franklin was the daughter of Jett Thomas, who was involved in the construction of Old College, UGA’s first academic building, in the early 19th Century. The seeds were planted on a number of properties in Athens, including the northern block of Milledge Avenue and West Broad Street, where the hospitable soil allowed them to take root and flourish.

From there, these trees became a living, breathing testament to some of the most pivotal turning points in Athens’ history.

From that triumvirate block of Milledge, Broad and Reese, they watched as baggy-clad workers walked at sunrise to their 13-hour shifts at local elevator factories and brick yards, as lamplighters snuffed out the flames of their candle and gas torches. And just the same, they saw lace-adorned aristocrats carried by covered wagons to their newly built federal mansions along Milledge as UGA steadily drew wealth and prestige.

They saw the devastation wrought by the Civil War and the staggering challenge of Reconstruction that followed. They saw the UGA become co-educational in 1918, and a quantum leap in women’s education with the opening of the Lucy Cobb boarding school (albeit for white girls only) right across the street.

The trees saw first kisses beneath silk parasols and the last gasps of segregation. They watched the development of Athens’ first middle-class Black neighborhood along Reese Street, where doctors, dentists, teachers and all manner of professionals established a flourishing, tight-knit community that continues to this day, anchored by the historic Mack-Burney House.

Across the yawning expanse of these trees’ past, one decade outshines all others: the 1960s, which started with a fight for survival and ended with a monumental victory for racial equality. In 1962, the remaining homes on the corner lot where Milledge, Broad and Reese converge were sold to the Frank Gordy-owned Varsity restaurant. On January 1, 1963, local officials quietly changed the zoning status of that block from residential to commercial.

Within hours, word of the change spread like wildfire across the entire county. Four days later, residents had amassed hundreds of signatures on a petition to reverse the order.

Over the next month, the “Save Milledge” cause intensified, and hundreds of signatures grew into thousands.

Ultimately, the commercial rezoning prevailed, and the Varsity was built. And yet, the lot’s sylvan arboretum remained mostly intact. How did the trees stay protected? The newspapers from the time failed to follow up on the outcome of the citizens’ petition, and the signees I tried to track down, many of them UGA professors and historical society members, had passed away.

One story I was given to explain their survival involves a young girl, Laura Ann Segrest, who either lay down in front of oncoming bulldozers or chained herself to a magnolia to stop their removal, depending on whose account you believe. Segrest is no longer alive to confirm her role as the savior of the trees, but it appeals to the hopeless romantic in me nonetheless.

The other story involves a rumored clause included in the deed between the land’s seller and the Varsity, which stipulated that any future development must preserve the trees and adjoining green space in perpetuity.

In his 1975 book “Strolls About Athens,” then-UGA Dean William Tate alluded to some kind of protective statute for the trees when he wrote: “The Joe Hodgson house was torn down for the Varsity, which respected the zoning law by leaving a beautifying green strip between Milledge and their business.” However it happened, the trees remained, and they did so in time to bear witness to one of the most climactic periods in Athens’ political history.

In 1964, the Milledge Avenue Varsity opened its doors, but those doors were unlawfully divided by race. The 2014 documentary short “If We So Choose” recounts how the Varsity came to embody the city’s racial inequality and assumed the backdrop of its burgeoning Civil Rights movement.

These trees watched hundreds of poised and steadfast protestors assemble onto the grass beneath their shade after having marched in heatwaves and winter frosts from Ebenezer Baptist Church down Broad Street and back, often with bands of hooded Ku Klux Klan counterprotesters blocking the way.

The immediate goal of the movement was to desegregate the Varsity. And through their concerted and unrelenting efforts, that goal was achieved when the restaurant conceded to integration. In “If We So Choose,” one of the demonstrators, Ken Dious, who went on to become the first Black attorney to practice law in Athens, jokes that, “After all of that, I found out I don’t like hotdogs.”

Look to the past of these trees, and you gain a front-row seat to the sweeping transformation of this small Southern town from agricultural weigh station to cultural and academic mecca. These trees watched its lands change from farms to foundries, from circus fairgrounds to college fraternities. And these trees watched its residents fight through blood, sweat and tears for equal rights among all genders and races.

GUEST COLUMN: Young people are starving themselves for climate action. I joined them.

I felt delirious and weak, yet this was nothing compared to what would happen in a catastrophic climate scenario.

GREEN GEORGIA: Georgia, Athens could be poised to lead in solar energy

Despite the fact that there are no solar power mandates in Georgia, the industry is booming.

OPINION: Bezos does not need space funding, NASA does

Space travel is possibly our species’ greatest feat, and it should not be beholden to quarterly reports.

SAVE THE TREES: Speaking for mother nature

This isn't a quaint story about a local small-town movement to preserve a bunch of beloved magnolias. This is a global issue of mankind not respecting the land from which we are nourished.

OPINION: Are diversity efforts working at The Red & Black?

I’ve been able to grow and strengthen my journalistic writing skills while contributing knowledge to my own community. However, The Red & Black is not perfect.

Nuclear energy is not the future for a sustainable Georgia. The source is too costly, too time-consuming and not nearly as green as proponents wish you would think.

Using LED Christmas lights can not only make an area more festive, but also make it more energy efficient.

Millions of commuters, businesses and various forms of transportation are using mostly nonrenewable resources for energy. We are slowly moving…