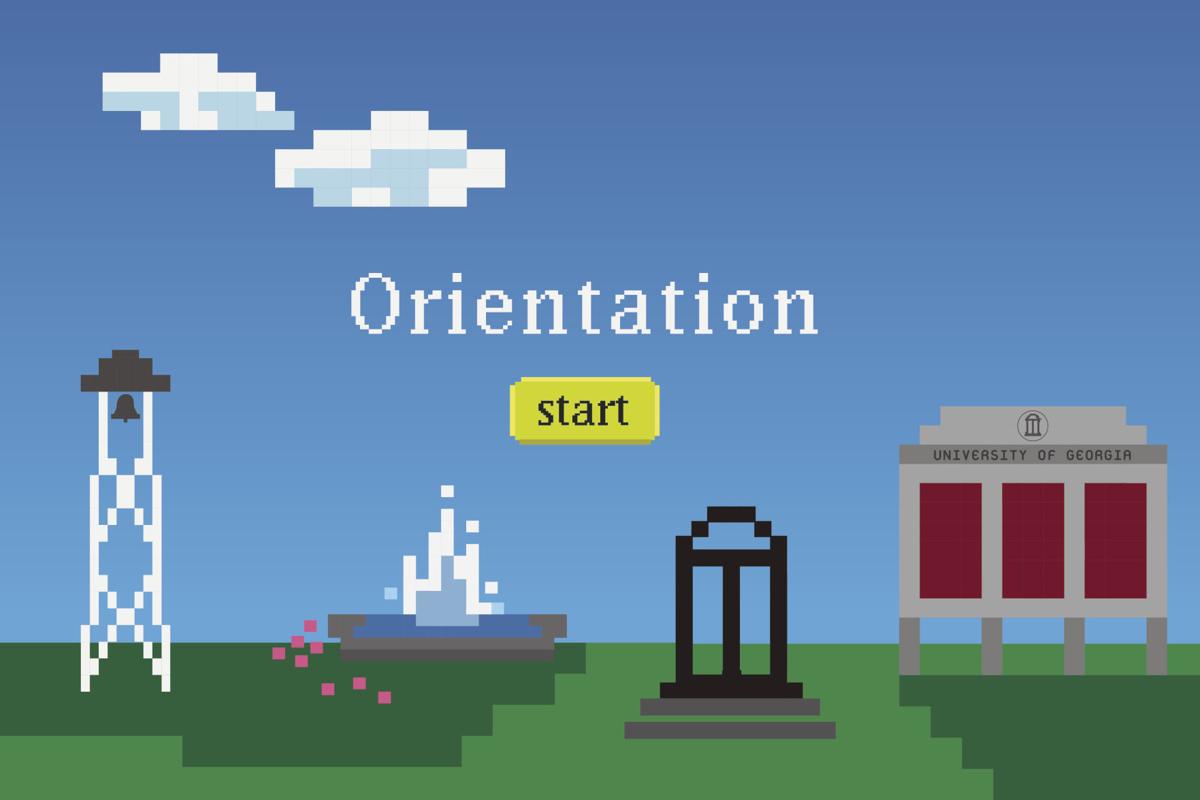 New Student Orientation has been moved online during summer 2020, due to COVID-19 concerns. In lieu of in-person sessions, orientation leaders are now leading through Zoom and online modules. (Graphic/Mary McKean) 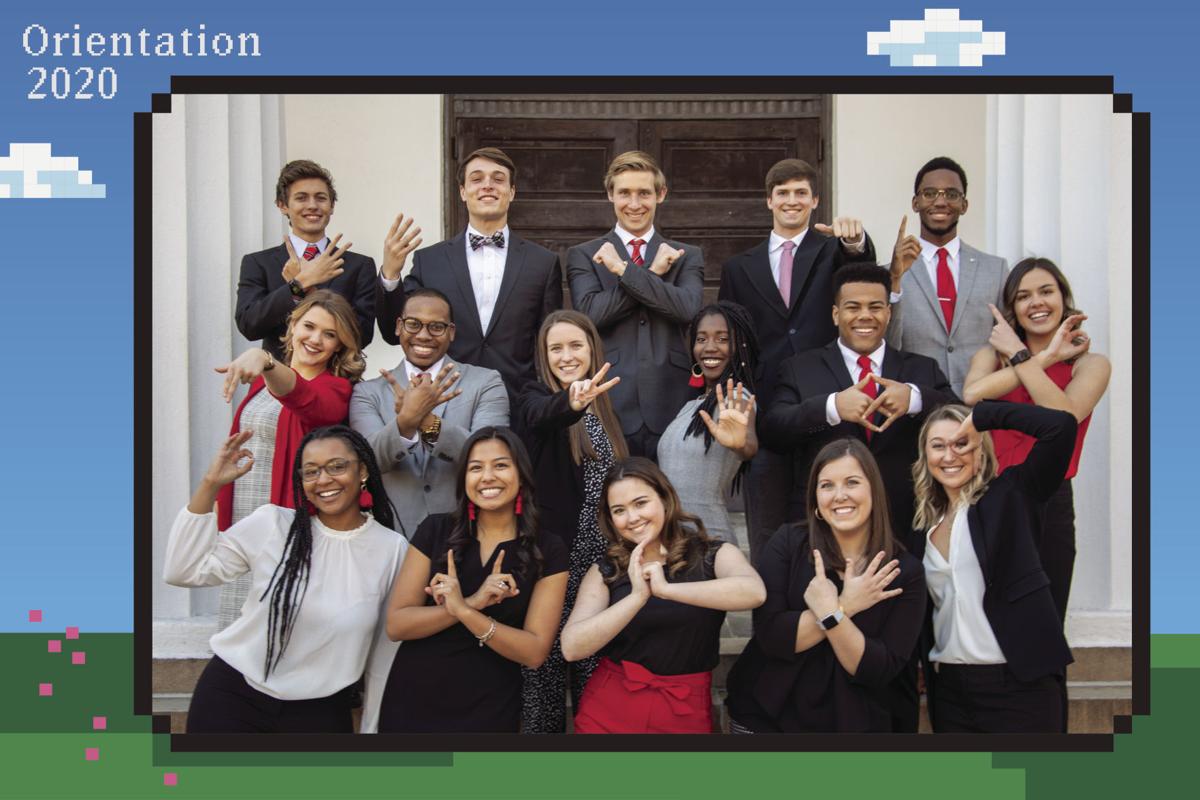 This year, the 16 orientation leaders are learning to adapt to their new environments in leading the incoming group of UGA students. (Photo/UGA New Student Orientation, Graphic/Mary McKean)

When John Roorbach attended New Student Orientation in the summer of 2017, he said his orientation leader was captivating. Roorbach said Jesse Kerzner, leader of the “Turnt Twos,” was energetic and kind, and Roorbach wanted to become “just like him.”

“If I can try and be as supportive to these first years as he was with me, I think I could be happy with myself,” Roorbach said.

Only weeks after Roorbach was chosen as an orientation leader before his senior year, the COVID-19 pandemic disrupted life across the world. The usual two-day itinerary, in-person small group sessions and educational lectures about campus life are a far cry from the orientation Roorbach is leading this year.

Usually, orientation can mean the first taste of dining hall food and the introduction to traditions at the University of Georgia. COVID-19 had different plans for the class of 2024. Instead of stepping onto UGA’s campus for the first time as a college student, incoming freshmen are logging on to Zoom and watching hours of videos and learning modules to introduce them to campus life.

Prior to meeting their orientation group and leader, incoming students are expected to complete a set of UGA 101 learning modules that provide videos and information about campus involvement, programs and organizations.

Through this model, freshmen receive “a similar amount of information” as an in-person orientation, director of New Student Orientation Larry Cloud said in an email to The Red & Black.

“This has allowed students to still get that information, but without having to come to campus to receive it,” Cloud said. “We felt that this plan allowed us to prioritize the safety of our campus community and the successful transition of our incoming students.”

During the Zoom meeting with their orientation leader, students participate in a Q&A session and learn about The Georgia Way, which denotes a set of values for “each student to embody,” Roorbach said. Some of these values are inclusion, diversity, community and respect.

As part of their virtual orientation, incoming freshmen complete online modules and meet with their orientation leader over Zoom. (Video/Sherry Liang)

Making (and maintaining) a connection

When discussing the set of values encapsulated in The Georgia Way, Roorbach always mentions inclusion first during his sessions. He said he addresses the “consistent social injustice” and protests for racial justice upfront.

“I do this so the students know that they will be heard, they will be supported, and they’re going to find a community at UGA,” Roorbach said.

Many incoming Black students have reacted to the university’s response to the recent protests against police violence and racial injustices.

Intended journalism major Jessica Evans tweeted her disappointment regarding President Jere Morehead’s May 31 statement about the protests for racial justice.

As an incoming student I am disappointed and dissatisfied. Being a minority student in general is hard enough but for this president to act like he can’t directly and specifically address what’s going on is saddening and scary. There is no type of sensitivity or comfort in this. https://t.co/5q5sqU54mw

“As an incoming student I am disappointed and dissatisfied,” Evans said in the tweet.

Evans didn’t expect her orientation leader to mention the national protests during their Zoom session. Although she felt a bit of “tension” because she was the only Black student in their session, she was pleasantly surprised when “Fantastic Four” leader Roorbach touched on the topic.

“I thought, ‘Okay, he’s talking about it, which is a good thing,’” Evans said.

Incoming animal health major Brandon Reece said he wants to see UGA stand up for those being oppressed and be willing to stand up and fight for them, which he hoped to see from the orientation leaders as well.

“I know it can be an uncomfortable conversation, but bringing it up and acknowledging that it is real and knowing UGA represents minorities and people of color is helpful,” Reece said.

Jordan Sosnovsky, an incoming freshman from Alpharetta majoring in exercise and sport science, wasn’t sure what to expect but was not disappointed after her session.

“I liked how the meeting wasn’t super long, it was only an hour, and wasn’t boring either,” Sosnovsky said.

Despite the limited time in an orientation group session, the 16 orientation leaders are still striving to make a connection with incoming freshmen.

Our team just finished two weeks of training. #UGA24, we’re ready for you! We can’t wait to see the first members of the incoming class on Monday!

Orientation group sessions are one hour for each orientation cohort. Cloud said that these sessions are required because they’re an “important piece of the social engagement that typically happens at orientation.”

Roorbach leads two to three orientation groups per week. He does most of the talking during the session, but he makes time for personal introductions and questions.

Roorbach also makes himself available for four office hours and one registration hour every week where students can ask him questions about registration and anything related to the upcoming year.

July 6: What does UGA’s virtual new student orientation look like?

Academic advising is typically an important component of freshman orientation. During this process, incoming students meet with their assigned academic advisor to outline and discuss their academic plans, such as crafting a schedule and choosing a major.

With the virtual orientation, incoming freshmen will meet with their academic advisor via Zoom, phone or email, according to the UGA New Student Orientation website. Students will not be able to register for classes until they complete their virtual advising appointment.

Will Lewis, lead adviser for intended business majors at the UGA Exploratory Center, said advising services will continue to prioritize providing incoming students with accessible, dialogue-driven advising despite the lack of face-to-face interaction.

“[COVID-19] has asked us to get creative in how we can safely facilitate those discussions without sacrificing quality or access,” Lewis said.

One challenge that Lewis and his colleagues foresee for fall 2020 advising is the lack of in-person advising. Lewis said in-person sessions can develop students’ rapport with their advisors through body language and other non-verbal cues. For this reason, advisors will meet with students via Zoom to still provide these non-verbal signals.

“When you only have a finite amount of time to spend with each student, non-verbal confirmation gathering can be crucial to our duty as advisors to listen to our students,” Lewis said.