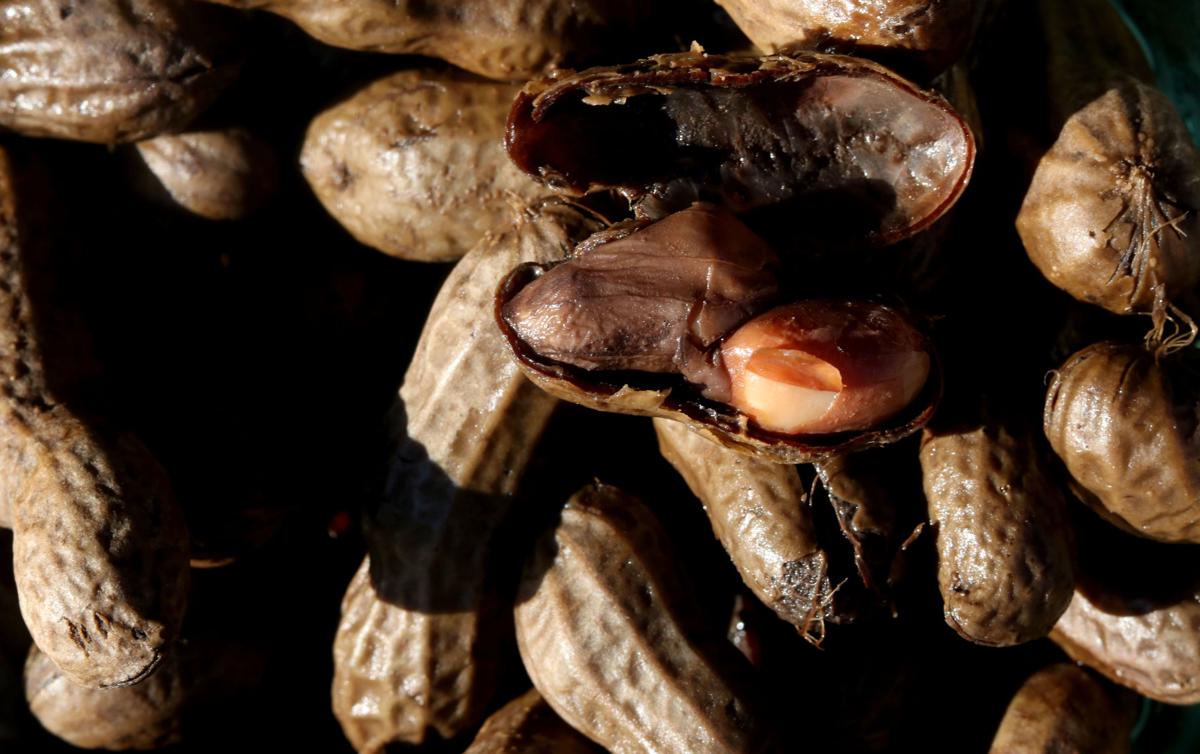 Peanuts, native to South America, grow well in warm climates. The legume grows in the ground, and people used to turn out the peanuts with pitchforks during harvest in the fall, culinary historian Robert Moss said. Ripe peanuts are called green peanuts, which still have moisture in them and keep for six to eight weeks. These were the favorite for boiling because it only took a couple hours, whereas raw peanuts, which are completely dried, take much longer. (Photo/ Erin Schilling, 404.291.9654) 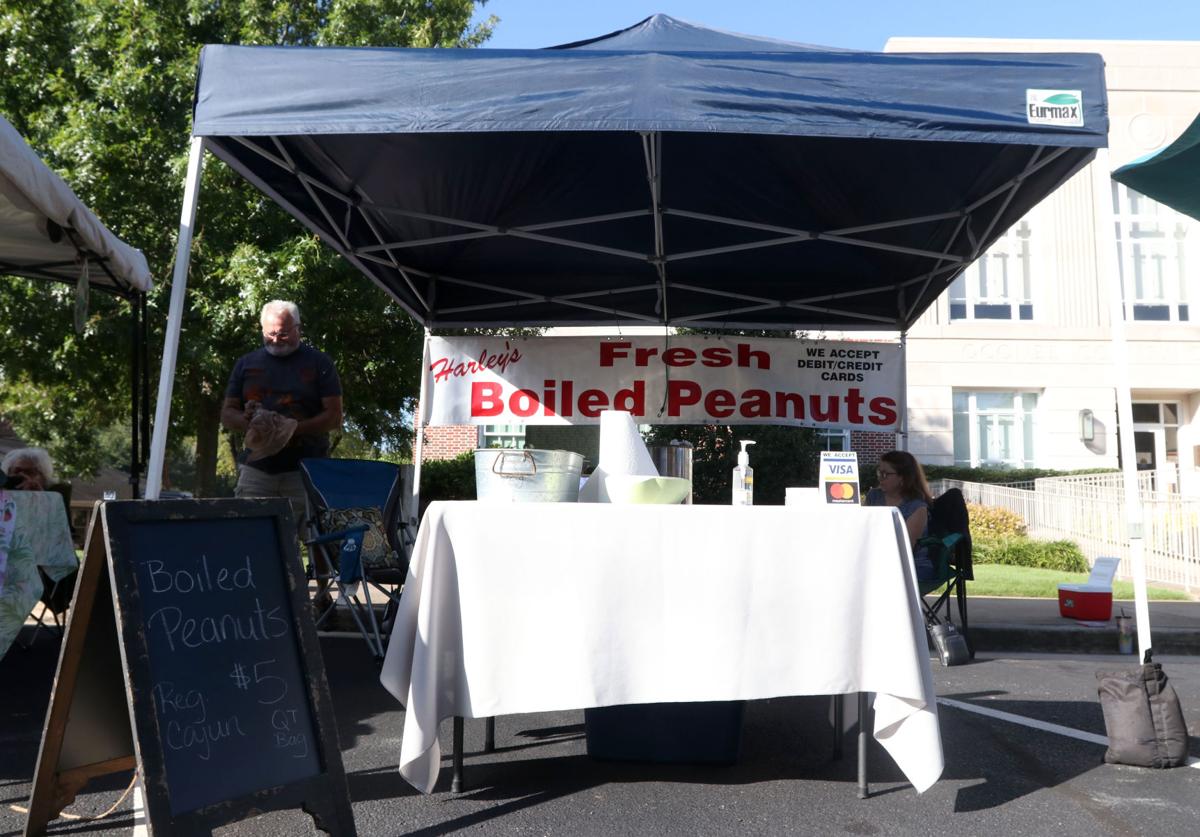 Larry Griffis and his wife sell boiled peanuts at the Oconee County Farmers Market on Saturday, Sept. 21. Griffis owns Harley’s Fresh Boiled Peanuts, a boiled peanut stand he started in retirement. He loves meeting customers, most of who are Southerners who have similar childhood memories of eating boiled peanuts with family and friends in the fall. Sometimes he’ll have people visit him who have never tried boiled peanuts, and he said he gets mixed reactions from these folks. (Photo/Erin Schilling, 404.291.9654)

Listen to the story

She cracks the shell with her fingers and sucks the brine out of the side of the peanut even before opening it. Then she eats the nut inside.

Larry Griffis, the man behind the boiled peanut stand, smiled at his new customer.

His boiled peanuts follow Southern tradition. Two big pots on a small trailer keep salt and Cajun peanuts warm while more peanuts lay in bags in a big cooler behind them. It’s a simple setup, one that’s similar to popup stands on the side of the road, many of the times advertised with handwritten “BOIL P-NUTS” signs — something that hasn’t changed much since Griffis, now 68, was a kid.

He always encourages his customers to crack open the peanut with their teeth. The shell is the most flavorful part.

“The proper way to eat a peanut — I kid people here — if you want to taste the peanut, you got to open it with your mouth,” Griffis said. “And that is the proper way.”

Boiled peanuts have been around for centuries, and many Southerners may not even remember the first time they tried them. Outside the region, though, people don’t have the same love for the soft-shelled snack, but it’s an integral part of the Southern foodways, especially now during football season.

Tinch remembers eating boiled peanuts while listening to Georgia football games on the radio, or her family would stop for a bag on their way to Sanford Stadium for a Saturday game. Football season starts as the peanuts ripen, and she said the fall is really the only time to eat the snack.

Like many of the most famous Southern treats, it started with the slave trade, said Robert Moss, a culinary historian for Serious Eats.

“African-Americans would grow them in their garden plots and cook them for their families,” Moss said. “It was definitely part of the African culinary tradition.”

Peanuts are actually native to South America, Moss said, but they’ll grow well in any warm climate. They’re also not really nuts. They’re legumes, which means they’re in the pea family. The Portugese brought them over to west Africa, and Africans brought them as a food staple into the U.S. Boiling them was a cooking technique by black slaves.

The origin story may not even be known to native Southerners. Popular folklore says starving Confederate soldiers boiled peanuts out of desperation, and they turned out to be delicious. Moss said letters from these soldiers during the time contradicts this story, which ignores the major contributions African-Americans made to culinary tradition in the South.

“Both in the African-American communities and the white communities in the South, late 19th century and early 20th century, you see boiled peanuts, particularly in South Carolina,” Moss said.

“The proper way to eat a peanut — I kid people here — if you want to taste the peanut, you got to open it with your mouth.”

From there, boiled peanuts stretched into Georgia and North Florida, Moss said, though the food remains tightly regional. He found newspapers in Virginia, a prominent peanut-growing state, baffled at the thought of boiling them.

Griffis, another South Georgia native, remembers peanuts as an integral part of his childhood. He grew up a sharecropper’s son in the 1950s.

“There wasn’t a lot of money, and peanuts were just a treat that we looked forward to,” Griffis said. “And the reason they were there is because they served more than one purpose.”

Peanuts were a good crop because they add nitrogen into the soil and the leaves can be used to feed livestock. Peanuts were everywhere, and Tinch and Griffis associate boiled peanuts with festivities with family and friends. 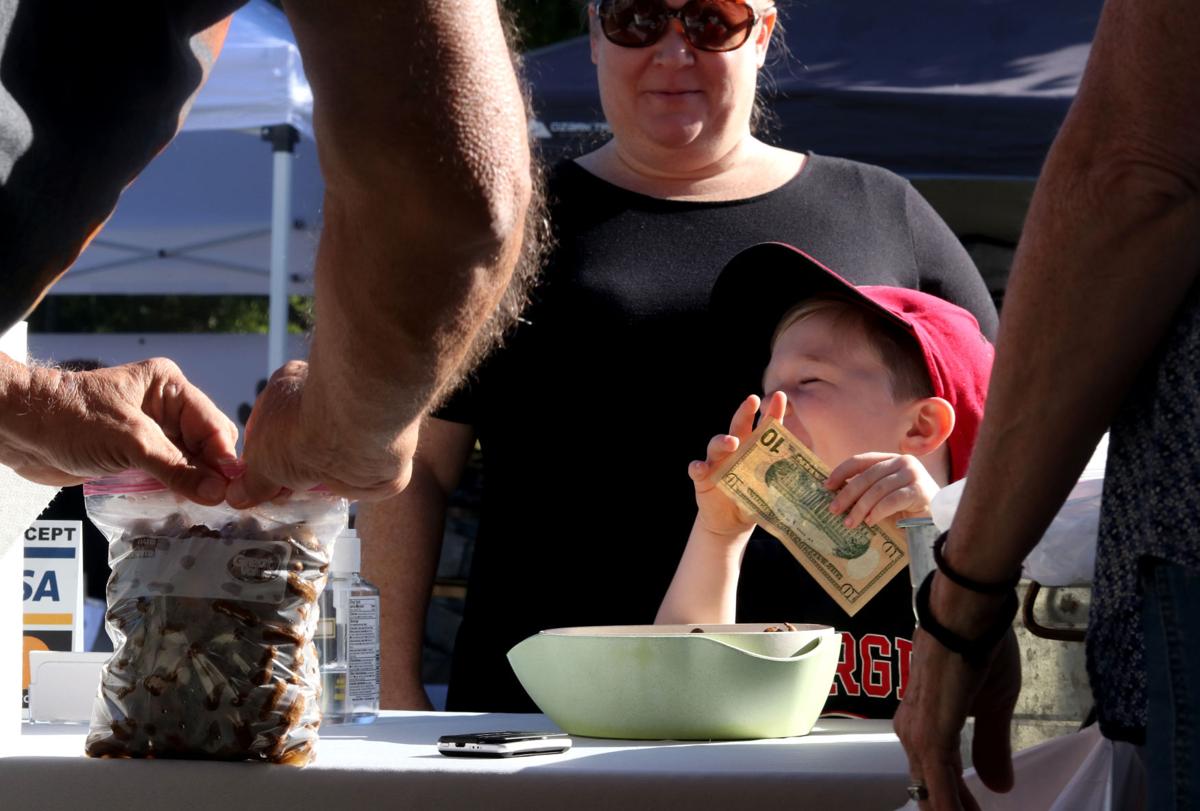 Britt Kellar, 4, hands Larry Griffis $10 for two bags of peanuts on Saturday, Sept. 21 at the Oconee County Farmers Market. Kellar walked through the market to Harley’s Fresh Boiled Peanut stands, smiling the entire walk down. Larry Griffis scooped out some peanuts for his favorite customer. “The biggest concern that I have as our culture has changed is that we’re going to lose a lot of our peanut eaters,” Griffis said. “Peanut eaters are typically your Southern people still, I’m just hoping we can keep feeding enough children who still like them.” Kellar gives Griffis hope that the tradition of boiled peanuts will continue. (Photo/Erin Schilling, 404.291.9654) 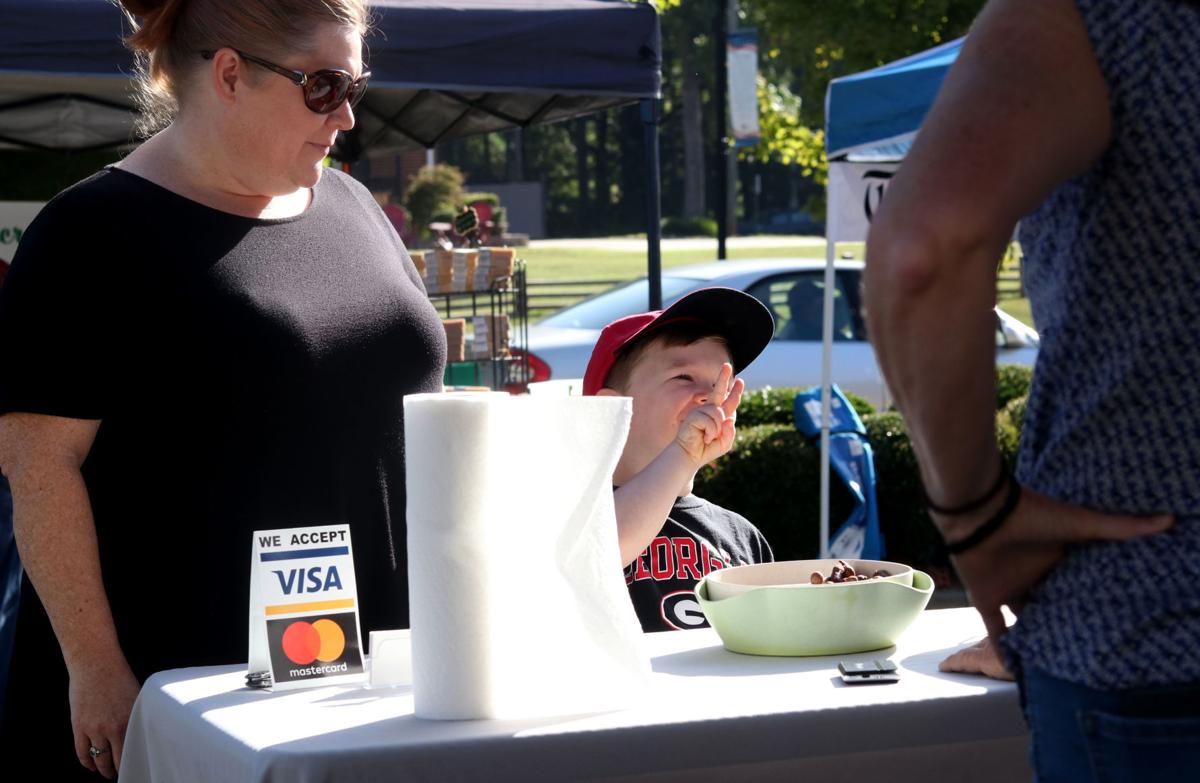 Britt Kellar, 4, orders two bags of boiled peanuts from Harley’s Fresh Boiled Peanuts on Saturday, Sept. 21. Kellar is one of Larry Griffis’s most loyal customers on Saturday mornings at the Oconee County Farmers Market. He comes almost every week, “grinning ear to ear,” Griffis said. “He just loves them, and he posted something on my Facebook page about how much he liked them. It’s a fun thing, it really is.” Customers like Kellar are why Griffis loves his business. (Photo/Erin Schilling, 404.291.9654)

Roadside stands boomed during the fall months because that’s when peanuts ripen. These freshly harvested peanuts are called green peanuts and still have moisture in them, which means they can be boiled in a couple hours. Griffis and his cousins used to steal into the fields to eat green peanuts.

“What we would do, we would go to the very end of the peanut patch,” Griffis said. “We would pull them up from that end, trying to get a few in without getting caught. It was just candy to us.”

Now Griffis orders raw peanuts, which are completely dried, from New Mexico so he is able to sell anytime of the year. He said Georgia farms have moved toward big-business white peanut growing for peanut butter and other products, and he prefers red peanuts to boil. 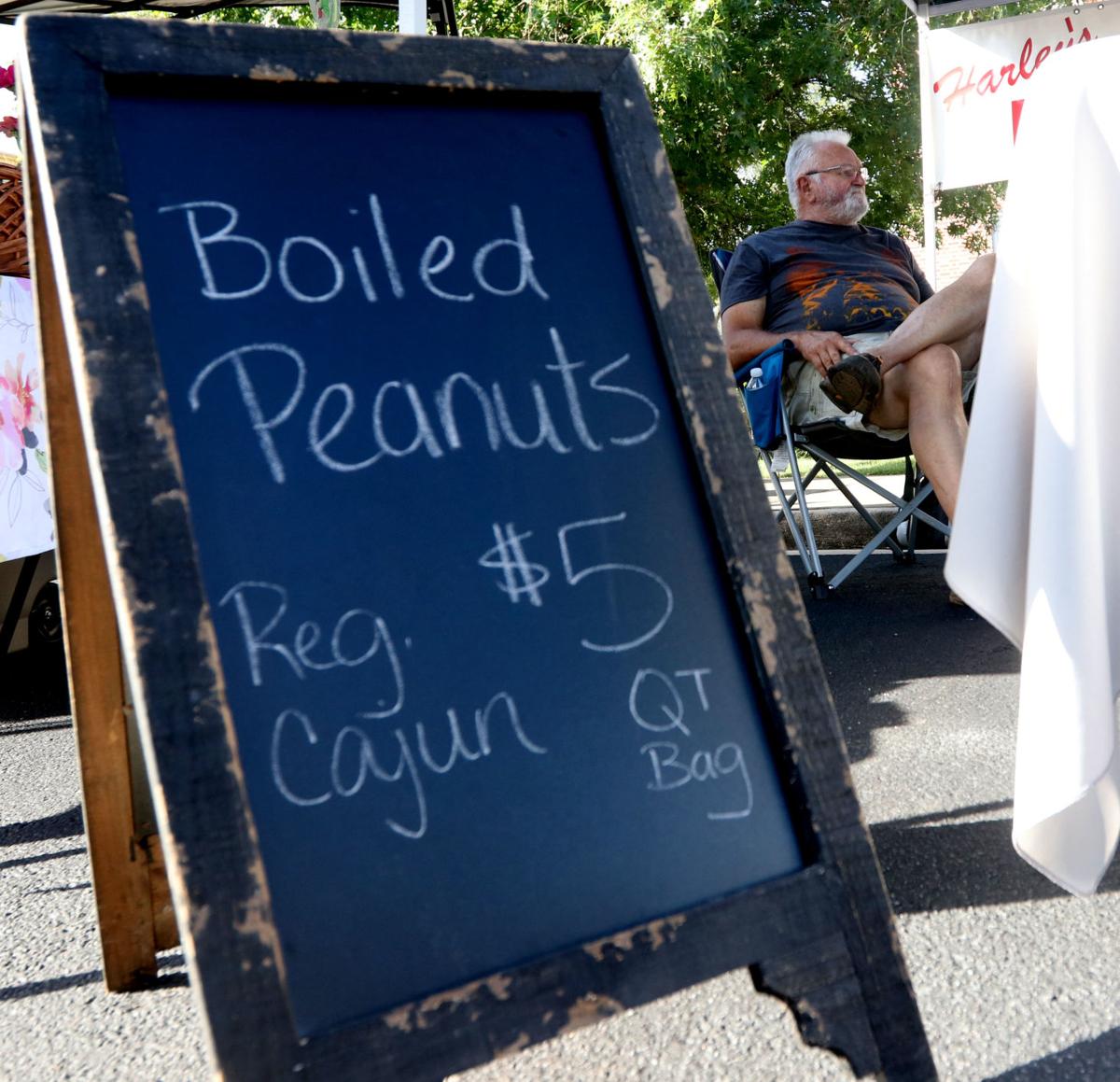 Larry Griffis sits at his Harley Fresh Boiled Peanuts stand at the Oconee County Farmers Market on Saturday, Sept. 21. Griffis sells quart bags for $5, in either regular salt or Cajun. Regular salt are still the most popular, Griffis said, and he called himself a peanut traditionalist since he sticks with these two flavors. He said the boiled peanut stand is good business. He makes about an 80% profit and does especially well during festivals. (Photo/ Erin Schilling, 404.291.9654) 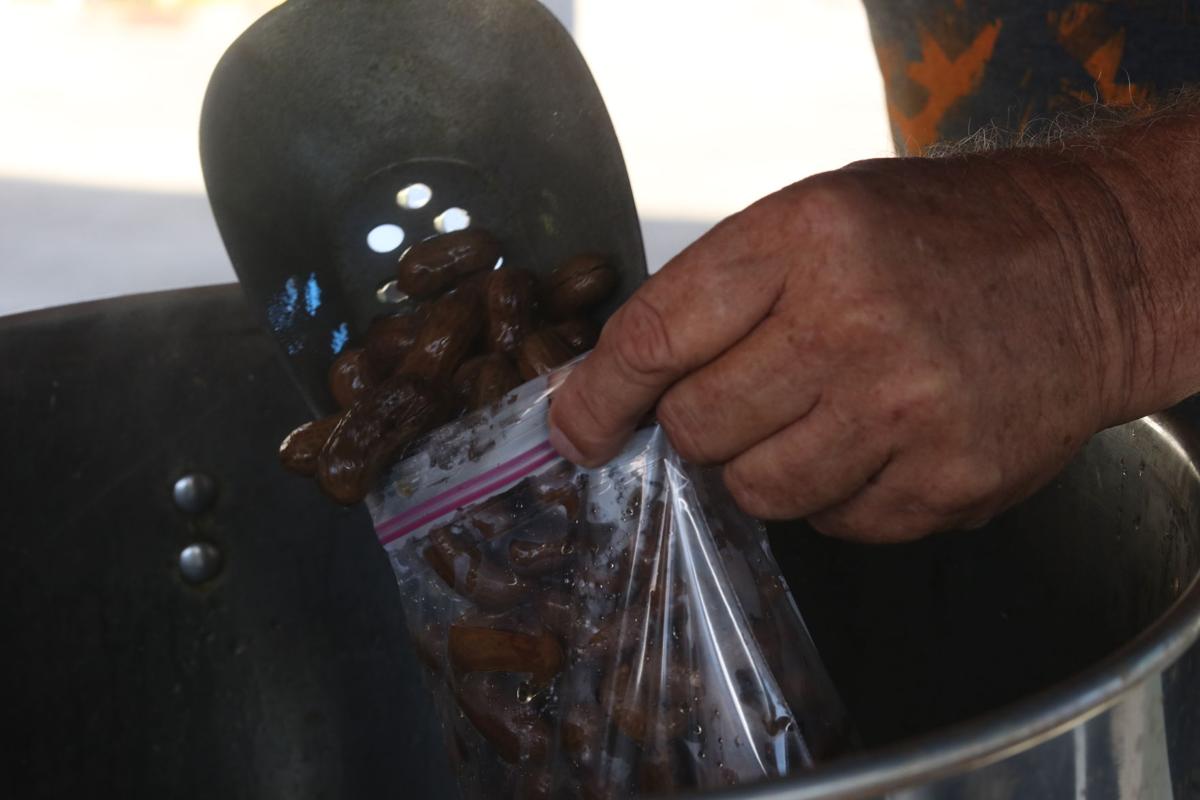 Larry Griffis, 68, owner of Harley’s Fresh Boiled Peanuts, scoops boiled peanuts out of a large pot at the Oconee County Farmers Market on Saturday, Sept. 21. Griffis ships in red peanuts from New Mexico for boiling. He buys 200-300 pounds of peanuts at a time. He soaks the dried peanuts in water for 12 hours to get moisture back into them. Then, he boils them for 14 hours, adding salt about six hours into the process. Afterward, he lets the peanuts soak in the brine for another 12 hours. His wife tests the peanuts during the cooking process to see when they’re done. (Photo/Erin Schilling, 404.291.9654)

Despite cultural changes over the past 100 years, boiled peanuts have stayed mostly an unaltered tradition. There’s still no big brands that sell them.

There are a few options on grocery shelves, such as Peanut Patch Boiled Peanuts, but Griffis and Tinch agreed that part of the allure of the snack is the atmosphere around them. Popping open a can from a shelf doesn’t have the same effect as buying a dripping bag from a fellow Southerner.

“I had some friends come in from another state, and people told them they should try the boiled peanuts,” Tinch said. “They got some in a can from the grocery store. And I was like, ‘What? No!’”

But Ted and Matt Lee, Southern chefs who grew up in Charleston, missed the unique flavor of boiled peanuts and figured other people out of the South did as well. They run a business where they ship traditional Southern foods anywhere for customers — including canned boiled peanuts.

“They have an original flavor that’s not similar to anything else, really,” Ted Lee said. “We were upset initially that they weren’t available in New York City, where I think we understand you can get pretty much anything.”

The two are fascinated with the food, which they consider an embodiment of Southern culture. Cracking open a shell isn’t just a burst of salty flavor. It’s also a burst of regional pride.

“The aura around boiled peanuts invites an anti-establishment, anti-commercial mindset, and I think Southerners like to rally around those kinds of things,” Lee said.

Historic Athens Porchfest is redefining what it means to perform at a music venue in Athens.

As many University of Georgia students are gearing up for midterms, others are preparing to celebrate the holiest of Jewish high holidays, Yom…

The values of peace and coexistence emblematic of the Woodstock Music Festival live on through the mission of the Georgia Conflict Center, a n…

Pumpkin spice up your Halloween decorations with these 6 crafts

Athens is finally showing some signs of cooling down, and with the sun setting a bit later by the day, Halloween decorations are beginning to …

Recipe: The Big Double burger is easy-to-make comfort food under $5

After a long day of classes,  a student council meeting at 5 p.m and an intramural basketball practice at 7 p.m., a big dinner is much appreci…