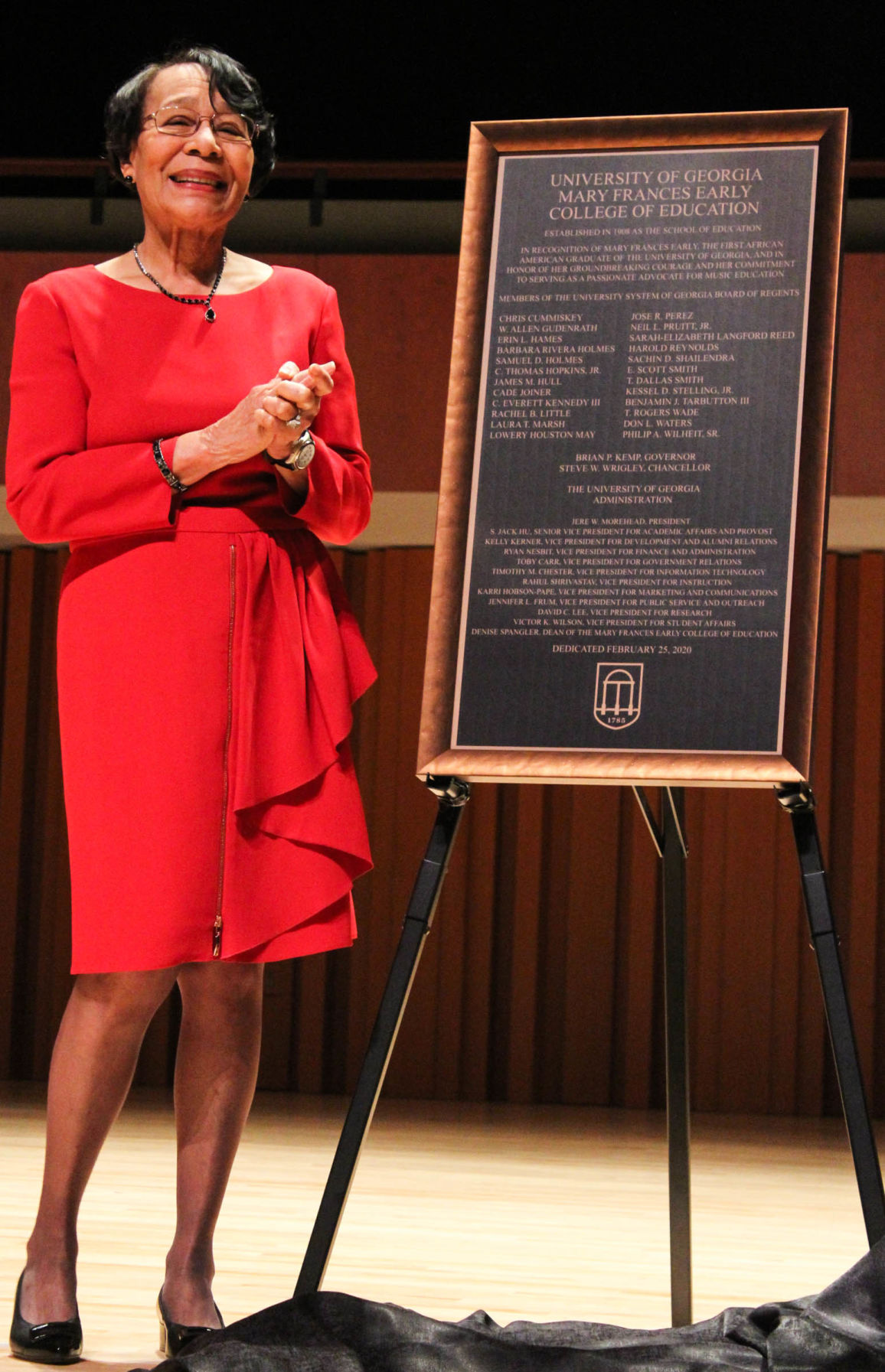 Mary Frances Early stands next to a plaque that will go into the newly named Mary Frances Early College of Education. The naming ceremony for college was held in Hugh Hodgson Concert Hall on Tuesday, Feb. 25. (Photo/Erin Schilling, 404.291.9654) 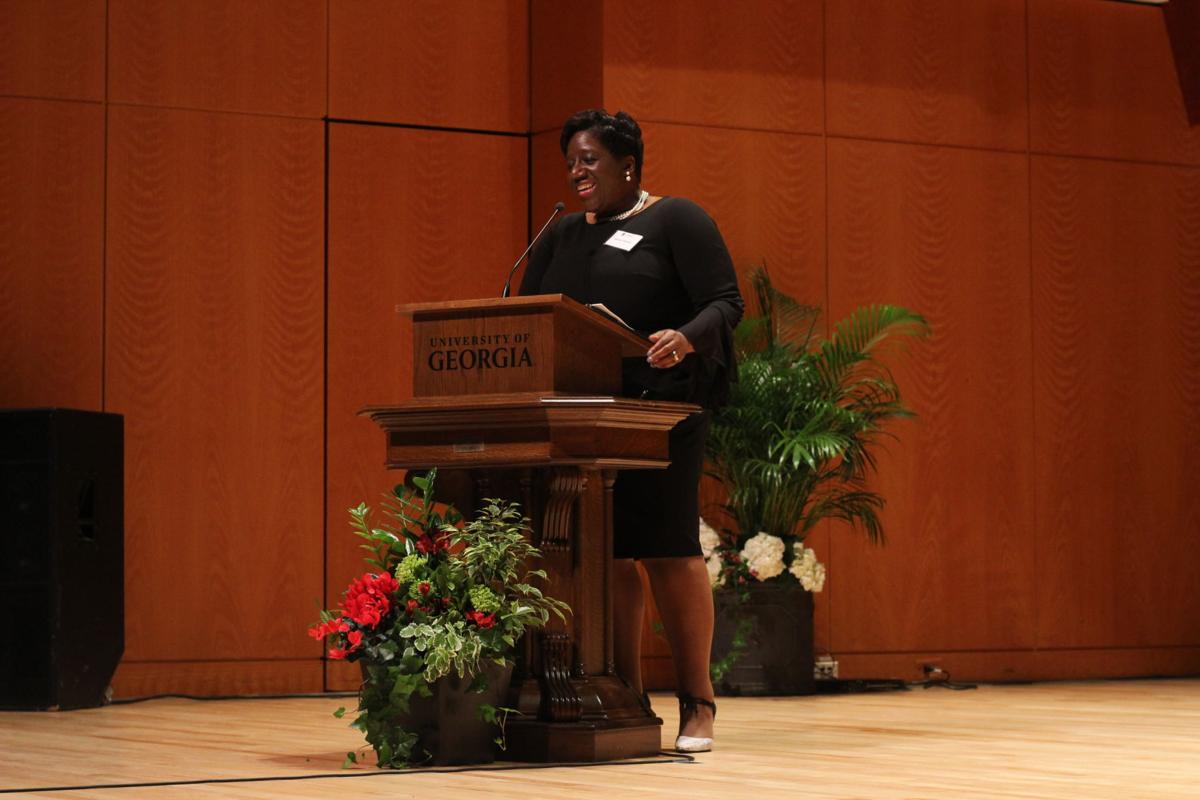 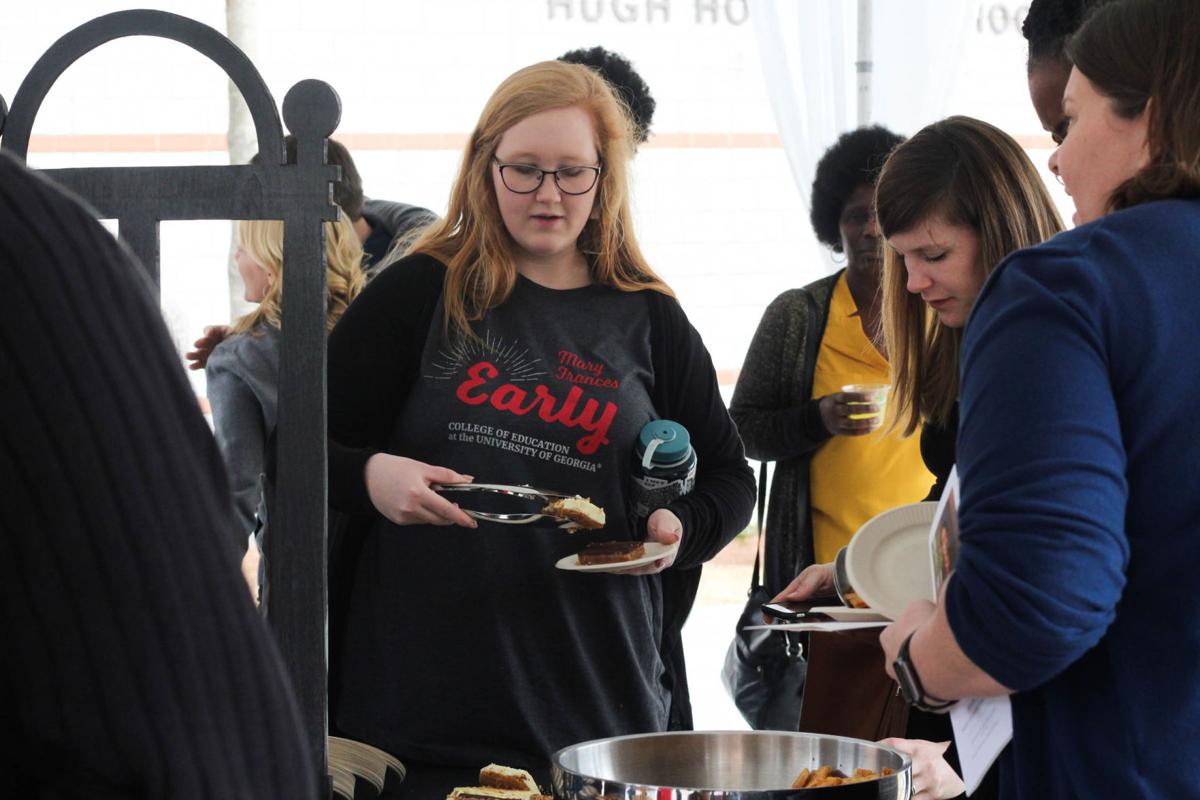 The speakers for the naming ceremony of the Mary Frances Early College of Education seemed like they knew Early’s story by heart.

Their voices swelled with pride as, one by one, they retold the audience about the bravery of the 83-year-old woman sitting in the front row of the Hugh Hodgson Concert Hall.

Early is the first black graduate of the University of Georgia, earning her master’s degree of music education in 1962, despite facing a climate of hate and ridicule on campus. She went on to have a successful career in music education and served as the music director for Atlanta Public Schools.

From the Early College of Education Dean Denise Spangler to University System of Georgia Chancellor Steve Wrigley, each speaker incorporated a piece of Early’s legacy into their remarks — her grace, her tenacity, her love for music.

“Music education is as essential to learning as math, reading and science,” Wrigley said. “Mary Frances Early used her love of music to make change both in the classroom and in history.”

With a full concert hall with guests such as Gov. Brian Kemp and first lady Marty Kemp, the ceremony’s importance was evident.

Early grew up in Atlanta and attended the University of Michigan for graduate school until she saw a riot protesting Charlayne Hunter-Gault and Hamilton Holmes on TV, the first black students accepted to UGA. After that, she knew she had to go to school in Georgia, despite her mother’s insistence that she shouldn’t.

“I said, ‘Mother, this is something I have to do,’” Early told the audience at the naming ceremony on Tuesday, Feb. 25. “I had to make a contribution to make our nation — our state — better. The thing I knew I could do was go to school. And so I did.”

Now, 58 years later, she is the first black person to have a college or school named after them at UGA.

An inspiration to the state

When keynote speaker Marion Ross Fedrick took the podium, she put Early’s story in perspective of her own life.

“It is personal,” said Fedrick, the president of Albany State University. “Like many of you, I am a beneficiary. I wouldn’t be the president of an awesome university if she had not made this sacrifice. She blazed the path so that I could attend UGA.”

Fedrick attended UGA for her bachelor’s and master’s degrees and said Early’s perseverance helped her continue her own education. She called on the audience to show other students support through financial or time commitments.

For Emily Huckaby, a student ambassador with the Early College of Education, Early’s name adds another reason to respect her college.

“This was fully funded with people who believe in Mary Frances Early and what she does and her cause,” said Huckaby, sporting a new shirt for the college with “Early” in large, red print. “I think that it’s so important to advocate for education.”

Aderhold Hall, the home of the Early College of Education, bears memorials to Early’s career as a music educator and teacher.

A fundraising campaign accompanied the naming of the college, and Spangler said $3 million was raised from 900 donors, which will go toward student scholarships and a distinguished professorship position.

“I wanted to open the door of the University of Georgia for graduate students like me.”

The UGA President’s Venture Fund and the UGA Foundation made the first donations, $200,000 each, for four Georgia Commitment Scholarships for students pursuing music education.

One of the many donors was Monica Kaufman Pearson, a fellow UGA alumna and retired WSB-TV anchor who said Early’s courage opened the door for her own education.

Gov. Kemp was among the dignitaries attending the naming ceremony for The Mary Frances Early College of Education. She was the first black graduate from UGA IN 1962 with a Master’s Degree in Music Education. Hard to believe she is in her 80s. pic.twitter.com/TkB48q0dyB

“It’s so wonderful for the university to recognize her in this way while she can still appreciate it,” Pearson said.

Before the plaque to Early was unveiled, high school senior Zoe Willingham performed a violin solo. Willingham is a fellow in the Atlanta Symphony Orchestra talent development program, which Early helped found.

Early commended the performance in her speech, and she said she continues to give scholarships to high school students, even after she retired from her long career in public education.

Early spent 37 years teaching in public schools. In 1981, she became the first black president of the Georgia Music Educators Association. She also went on to teach at Morehouse and Spelman colleges, and became the chair of the music department at Clark Atlanta University, where she earned her bachelor’s degree in music education.

“Education to me is the most important thing we can do,” Early said. “We will always need good educators, and to have the College of Education named in my honor is a — I can’t even describe it.”

Early’s belief in her right to education is what guided her to go to UGA. She didn’t want to be forced out of her home state. When she saw Hunter-Gault and Holmes, alumni of her high school, battling for integration she wanted to help.

“They had opened the door for the undergraduates,” Early said. “I wanted to open the door of the University of Georgia for graduate students like me.”

Upon receiving her degree, she told The Red & Black in 1962 that her fellow students were “for the most part merely tolerant.”

Though the university has improved drastically since Early’s days as a student, Phaidra Buchanan, a social studies education major, said there’s always room for more.

“Her life story reminds us that we still have a long way to climb,” Buchanan said. “I’m hopeful about the direction the university is going.”

Early remembered, that at the time, she thought graduate students would be more mature, but had rocks thrown at her and fielded other cruel actions. She said her professors were kind and helpful, however.

Early’s reception on campus is much different now. The College of Education hosts an annual Mary Frances Early lecture, and Early received the President’s Medal in 2018 and an honorary law degree in 2013.

The honors Early has received aren’t what made the decision to go to UGA worth it. It was the audience.

“Just look at this crowd,” said Early, smiling. “A really diverse crowd. This is why I came.”

If approved, the College of Education would be the first college at UGA named after an African American alumni.

OPINION: Why we need to restore Brooklyn Cemetery