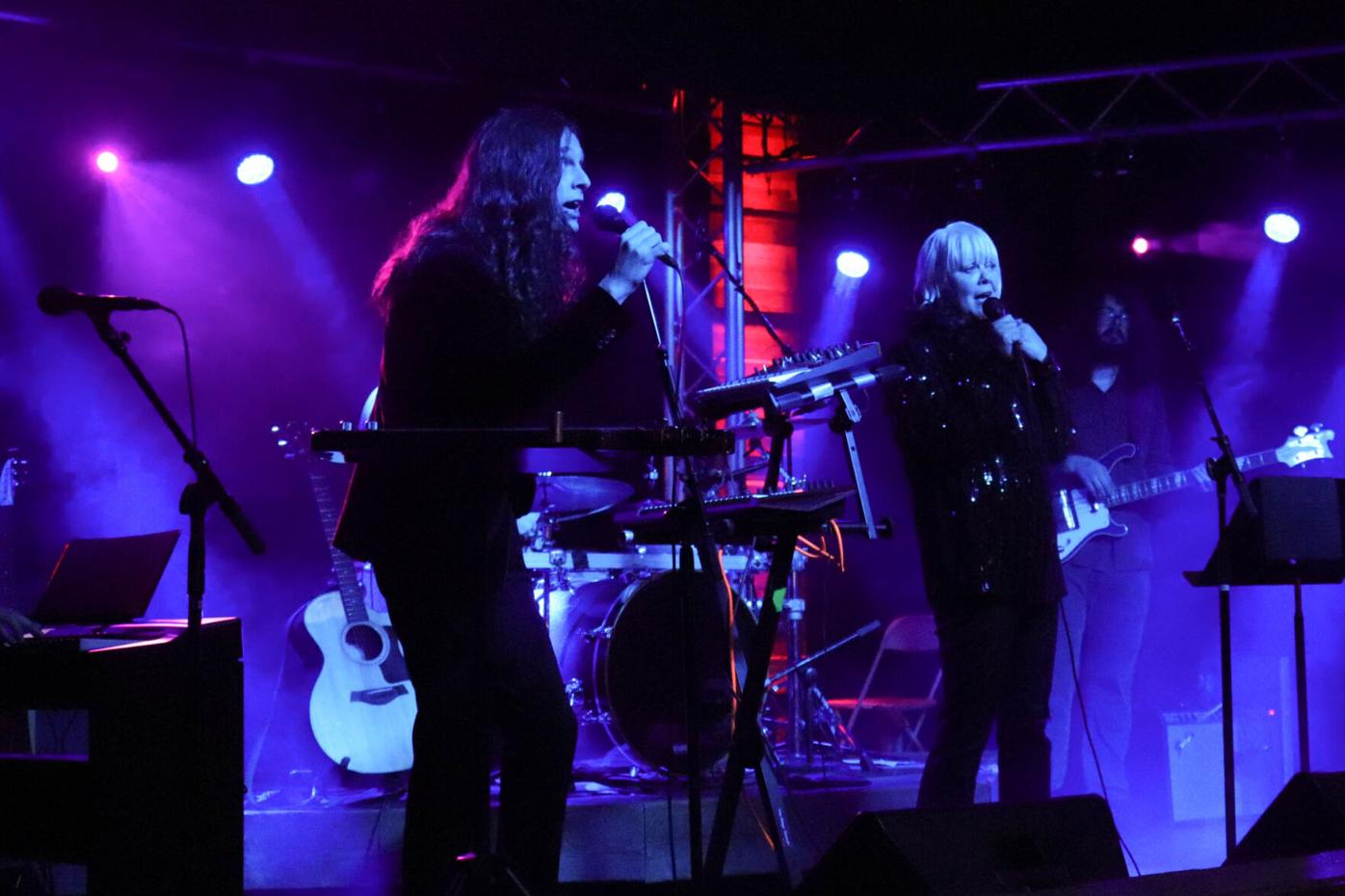 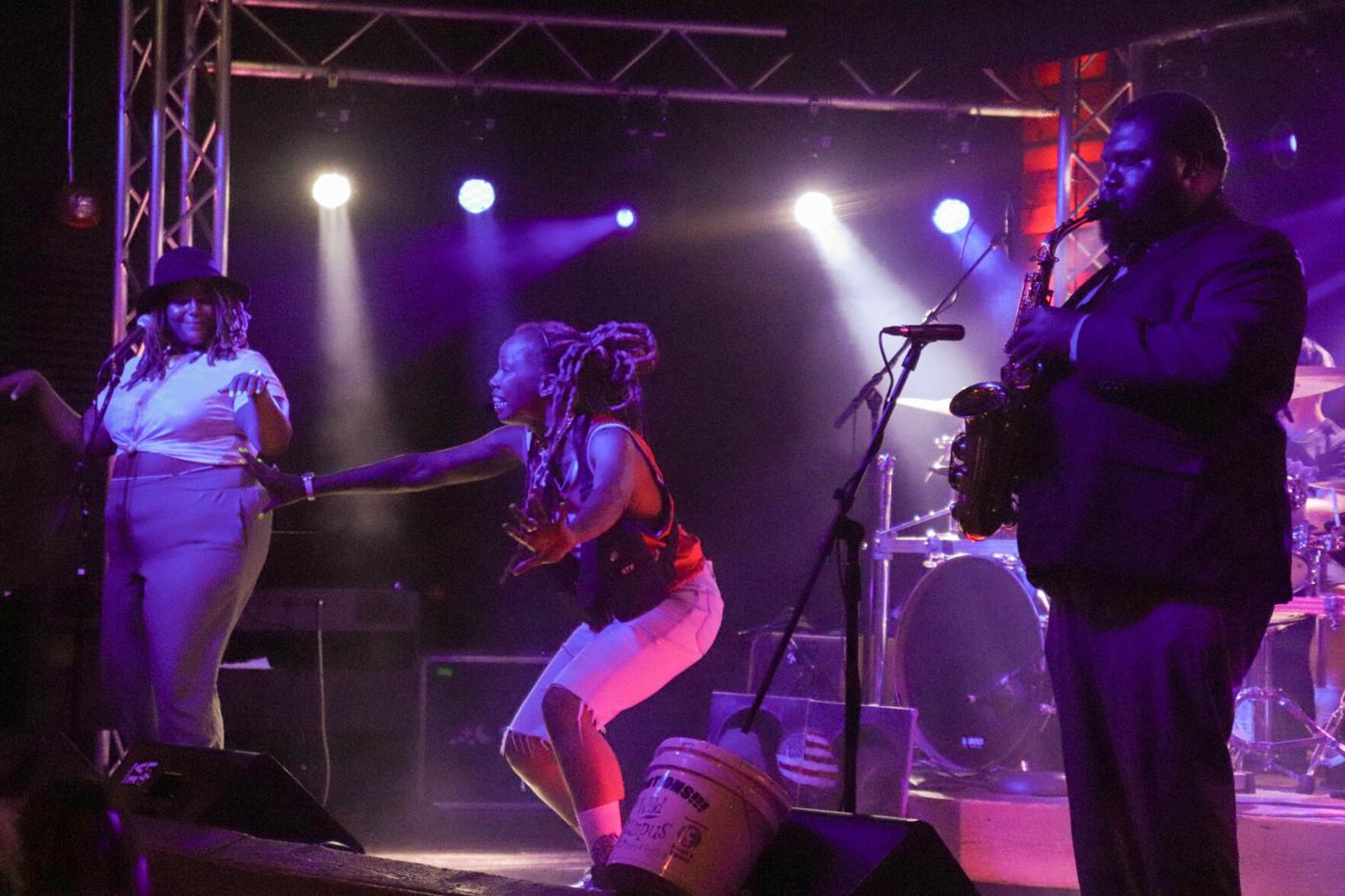 Athens hip-hop artist Cassie Chantel (center) performs alongside Sakeem King (right) and B3Still (left) at the Wild Rumpus Gala Fundraiser Banquet on July 23, 2021, at Live Wire in Athens, Georgia. Chantel performed a number of songs, including some off of her newest album “RICCH AUNTIE” that debuted the same day as the event. (Photo/Katie Tucker ktucker@randb.com)

“I saw R.E.M. play in a club for $2, and it changed my life,” recalls David Barbe, who today serves as director of the Music Business Certificate Program at the University of Georgia’s Terry College of Business.

Barbe originally came to Athens in 1981 to pursue a journalism degree at UGA. Now, in addition to directing the certificate program, he also runs the Chase Park Transduction recording studio.

Over the years, Barbe has toured with Mercyland (1985-91), Sugar (1992-95) and Inward Dream Ebb (2017-19). Barbe recognizes the significance of Athens’ artistic impact, given that Athens is a relatively small town with a “tighter-knit community than most other music scenes.”

“There can’t be a music scene in the country that has more music per capita than Athens, Georgia,” Barbe says.

It’s no secret that Athens has produced more than its fair share of music greats — think R.E.M., The B-52s, Drive-By Truckers, Widespread Panic, of Montreal, Vic Chestnutt and more who have been immortalized in the Athens Music Walk of Fame, established by the Athens Cultural Affairs Commission in 2020. The Walk of Fame follows a two-square-block area downtown and passes iconic music venues including the historic Morton Theatre, 40 Watt Club and the Georgia Theatre.

In July, R.E.M. celebrated the 40th anniversary of its smash single “Radio Free Europe.” While the band has had an outsize influence on Athens over the past four decades, the city continues to produce and attract new bands, rappers and singer-songwriters.

Hunter Pinkston moved to Athens from Albany, Georgia, to attend UGA. He plays instruments and sings vocals in a six-member band, The Pink Stones. Pinkston describes the band’s sound as “cosmic country.”

The band was finishing up a new recording when the COVID-19 pandemic hit. Pinkston says the shutdown allowed him to spend extra time on the recording, and the band was able to shoot a video. Now, the Pink Stones is ready to get back on tour.

“Our favorite place to play is at the Flicker Bar,” Pinkston says. “The Pink Stones, as a band, grew up playing there.”

Pinkston says the owner improved the sound system and enlarged the stage. “It’s just a cool, safe, nice place to play,” he says.

The latest on music venues

Athens music venues are gearing up for a fall packed with live shows. Whether you’re looking to catch an intimate coffee house performance, or you want to be one in a crowd of 1,000 fans cheering on your favorite act, Athens has the music venue for you.

One of Athens’ most prominent music venues is the Georgia Theatre. In the heart of downtown, this stage often hosts acts to draw in Athenians, university students and visitors. Grab a drink from the bar, climb up to the second floor balcony or secure your spot in front of the stage while you wait for your show to begin.

While the 40 Watt Club has changed locations several times (and upgraded its lighting — it used to only have one light bulb, giving it its namesake), it is a classic venue nonetheless. The current location, at the corner of Washington and Pulaski streets, hosts both local bands and bigger acts, showcasing everyone from The B-52s to the Strokes.

If you’d rather skip the crowd and see a more local outfit, Athens has a variety of bars, clubs and coffee shops that frequently feature live music. From Little Kings Shuffle Club to Hendershot’s, there’s a perfect venue for you.

The show goes on

In addition to the well-known Georgia Theatre and 40 Watt Club, Athens has a multitude of smaller venues worth visiting.

“Nowhere Bar is probably on the top of the list of the small venues because it’s across the street from the Georgia Theatre,” Barbe says. “And post-pandemic, they’re really trying to step up their game as a venue.”

Barbe says he is not sure which bands will still be playing after a year and a half off. He is, however, confident there will be a lot of great bands and suggests that people take a chance on something new.

“Anybody that will take the risk on live, original music in Athens, Georgia, they’re paying that forward to generations of people,” Barbe says.

The economic effect of the music business on Athens is tremendous, Barbe says. If the Georgia Theatre and the 40 Watt are both sold out, there are about 1,500 people who have bought a ticket. Many of them will eat and drink at nearby restaurants and bars.

He notes that a lot of the people who come here to be a part of the music scene stay and become part of the community.

“And a lot of these people wind up buying houses and raising families and opening businesses,” Barbe says. “It all started because of the music scene. It’s a beautiful thing.”

Check out the 25 items on this must-do bucket list for your four years in the Classic City.

University of Georgia alumni Julian and Jesse Inglima share a love for music and Athens, making up two of the four-piece local band Everyday D…

Locals and tourists alike can commemorate Athens’ rich music scene by visiting the Athens Music Walk of Fame downtown. Along the walk, visitor…