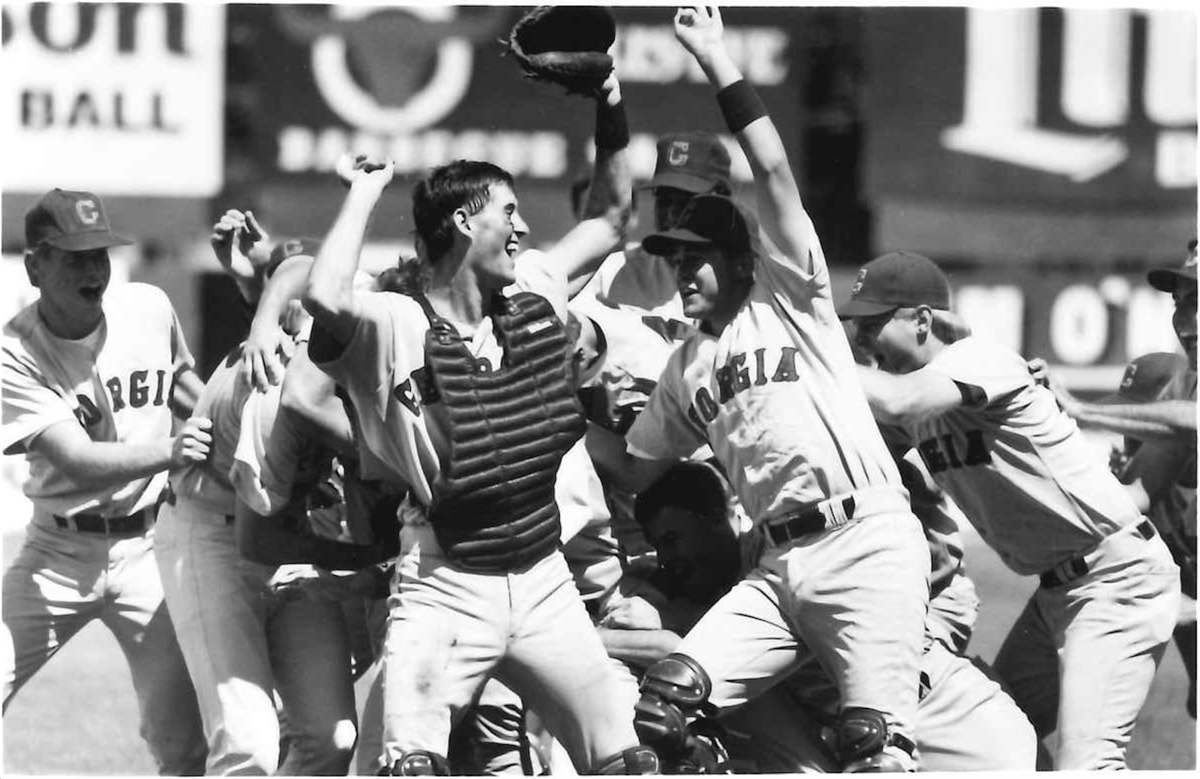 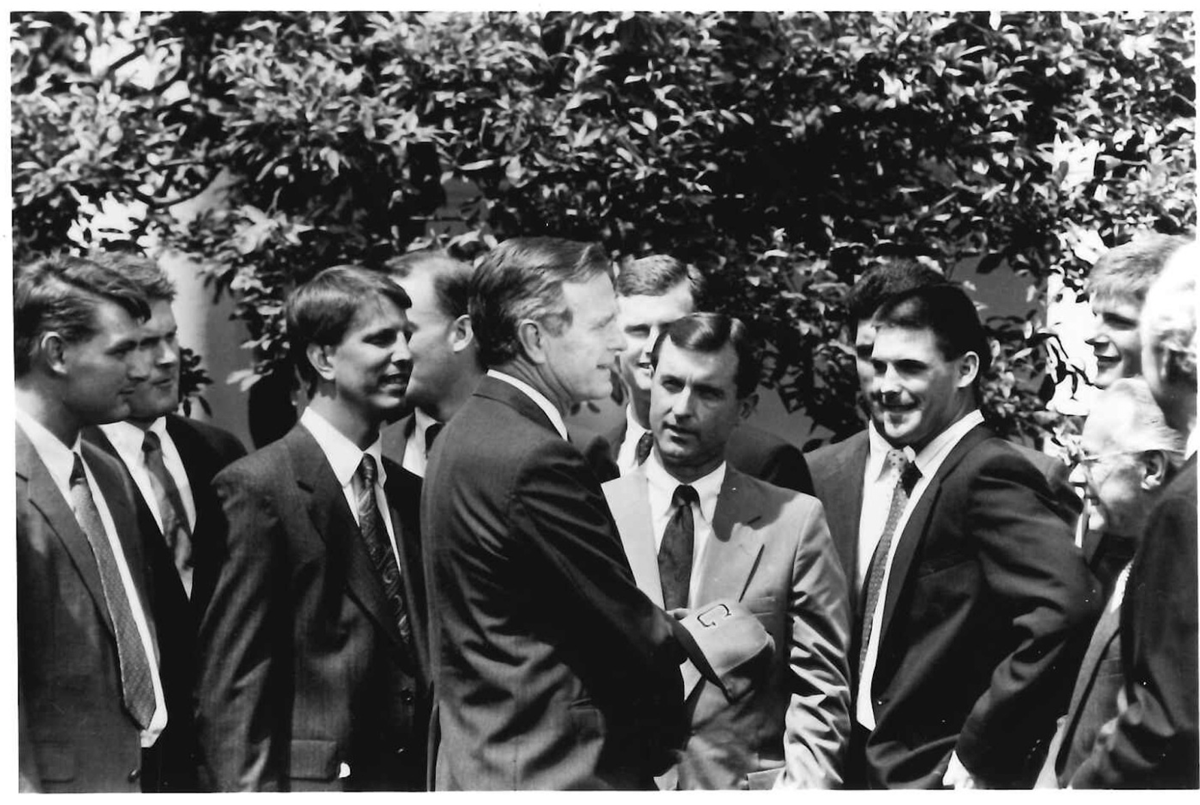 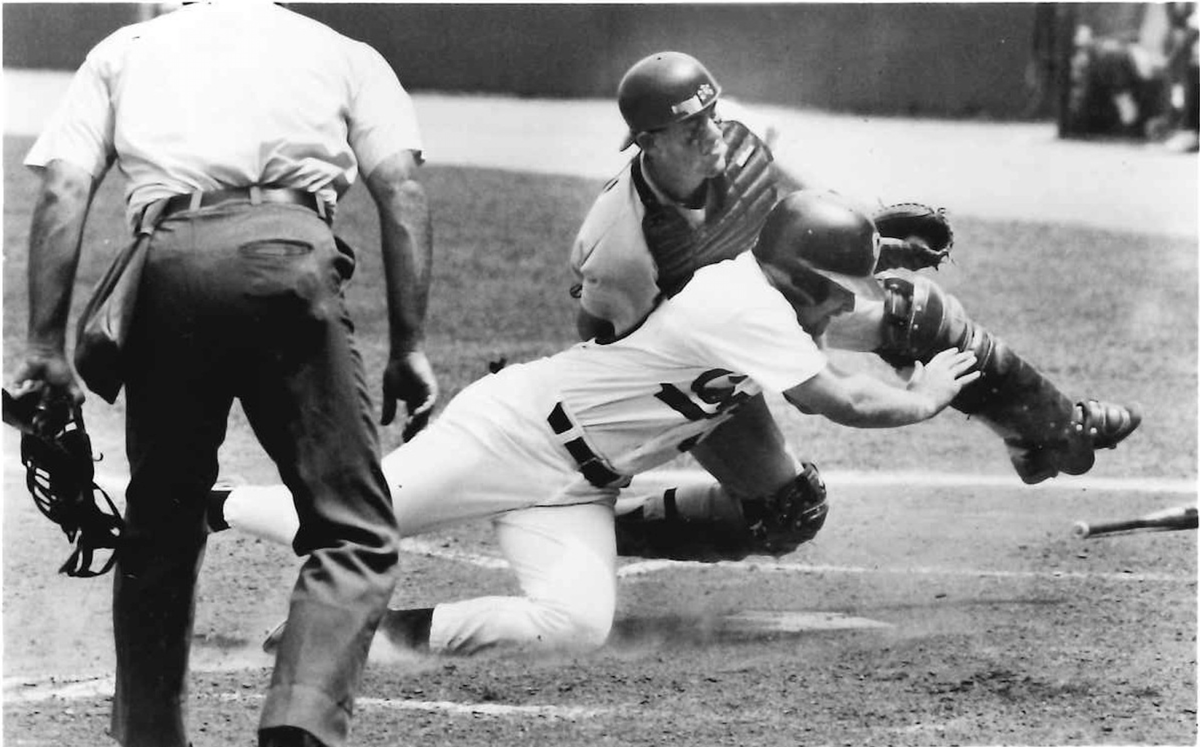 Oklahoma State's Brian Kelly collides with Georgia sophomore Terry Childers in the seventh inning of the 1990 College World Series championship game. Childers hung on for the out, and the Bulldogs retained a 2-1 lead. (Photo courtesy of Georgia sports communications) 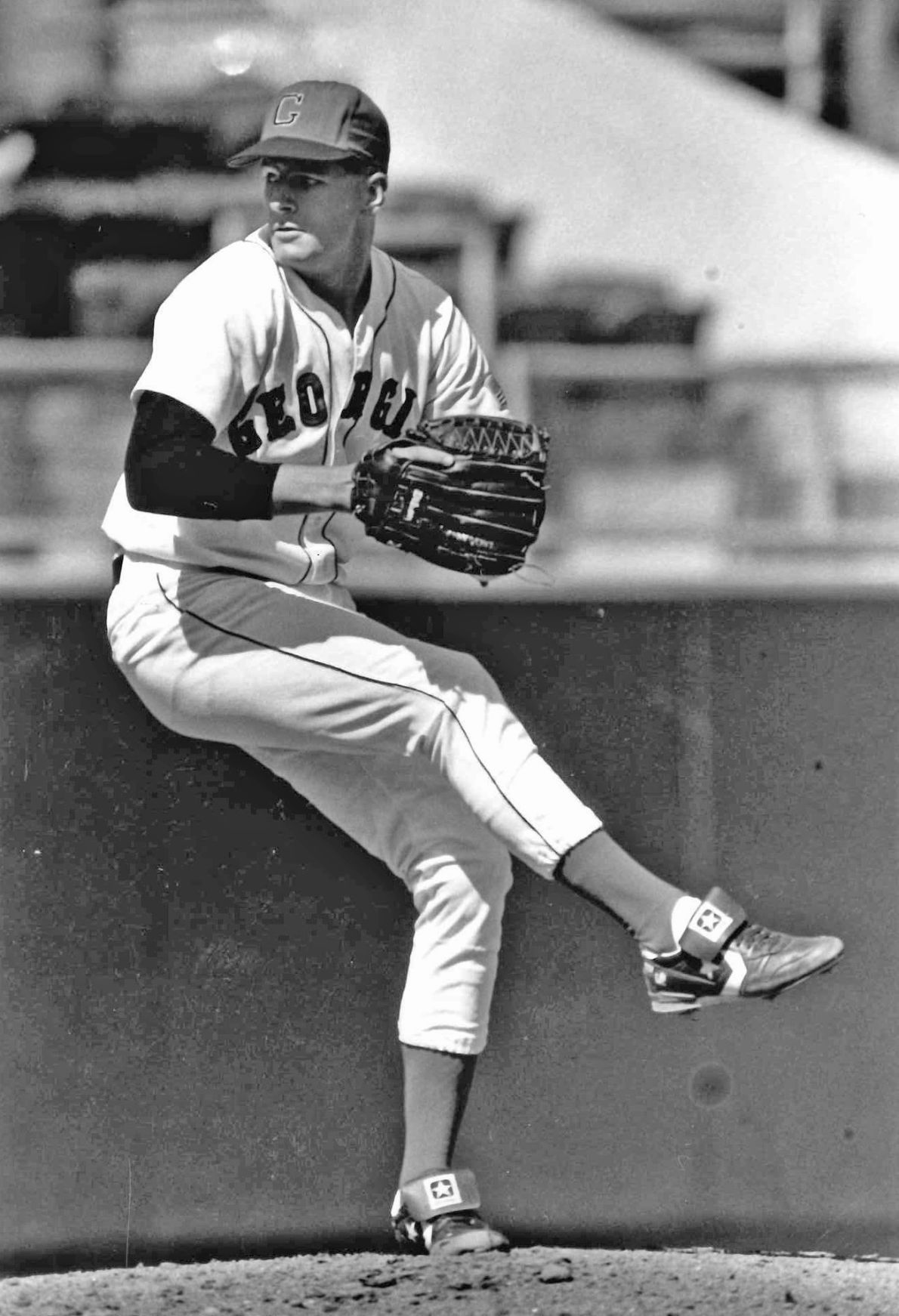 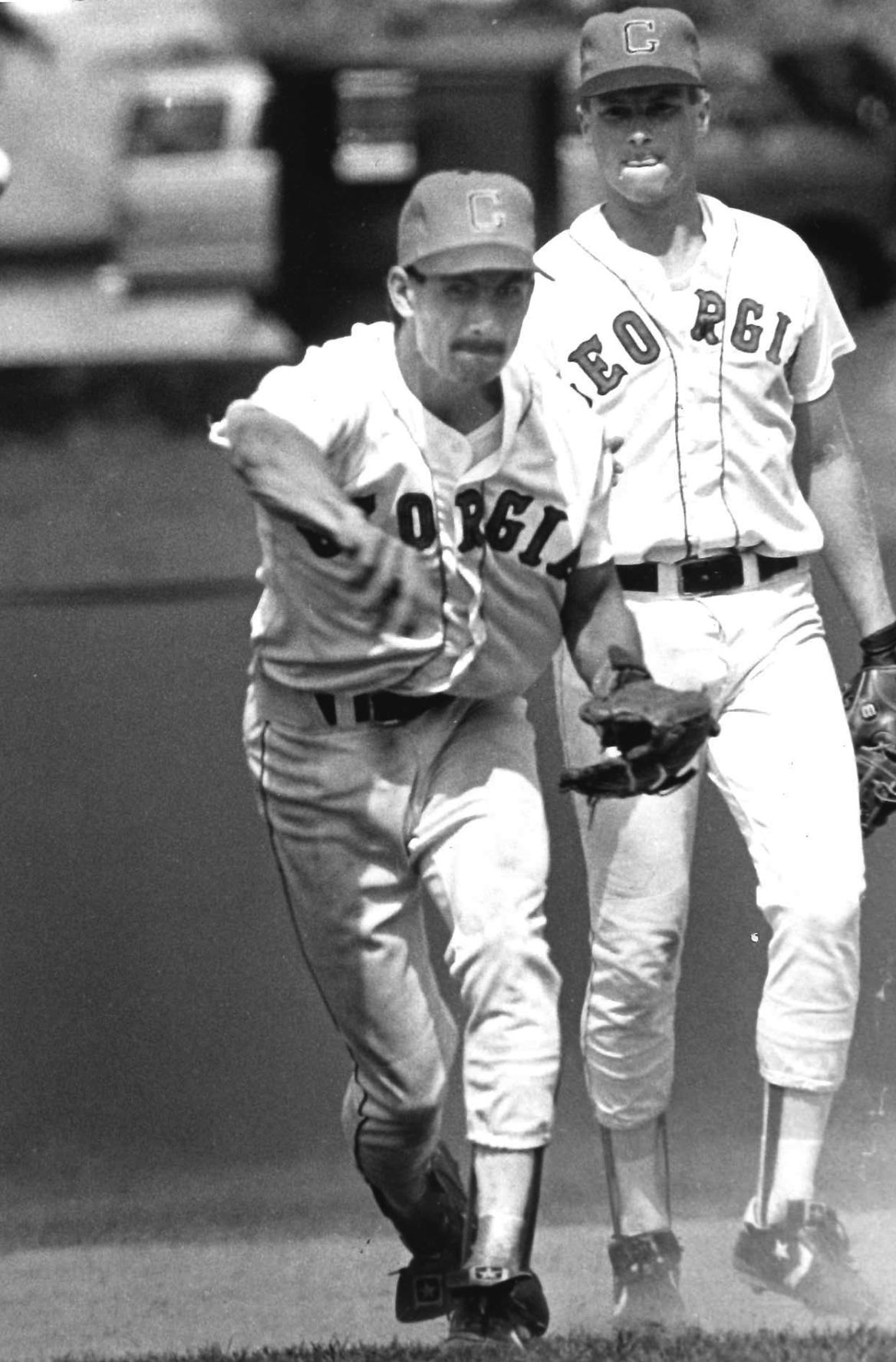 On June 10, 1990, the Georgia baseball team flew home from Omaha, Nebraska, national champions. The No. 4 seed Diamond Dogs went 4-1 in the College World Series to bring home the program's only CWS win in the tournament era. In part four of The Red & Black's four-part series on the 1990 team's run, we look at the June 9 championship matchup between Georgia and Oklahoma State as well participants' post-Georgia legacies.

“We were going to have a one game showdown with Oklahoma State,” then-freshman left fielder Ray Suplee said. “Who had more of a tradition and history and storied program. We were all in awe of the competition, no question.”

Heading into the 1990 College World series championship game, Oklahoma State was in its sixteenth CWS as a program. It was Georgia’s second. The Cowboys fielded three future big leaguers. Georgia pitched one. State had averaged 11.7 runs in three contests. Georgia booked 6.5 in four.

But Georgia had beaten top-seeded Stanford and Hall of Famer Mike Mussina twice en route to become the first ever SEC team to reach the tournament finale.

“I always worried about overconfidence anyway,” former athletic director Vince Dooley said. “I like to have a little chip in going after something.”

Back atop the SEC

The Diamond Dogs’ 1990 season almost came full circle. Their regular season spoilers and SEC nemesis, LSU had battled its way into the semifinals and threatened a rematch with the Bulldogs for the title.

Oklahoma State had other plans for the Tigers. While the Cowboys herded the cats back to Baton Rouge with a 14-3 rout on June 7, Georgia still had to beat Stanford to make it to the championship.

Then-senior Mike Rebhan – Georgia’s CWS Most Outstanding Player – pitched a one-run complete game against the Cardinal on June 8 with the world, and the Oklahomans, watching.

30 years since Omaha: Getting to the game

The last hurdle to history would be a winner take all one-off with the hard-hitting, Tigers-trampling boys from Stillwater. Double digits against LSU was no small feat. But as the saying goes, defense wins championships.

“We didn’t have time to get nervous,” Georgia assistant coach Greg Appleton said. “It wasn’t like it was a night game where we had to sit there all day and think about it … we just showed up at the ballpark and it was the next game.”

Rebhan and future MLB starter Dave Fleming, both seniors, were the only two Georgia pitchers head coach Steve Webber had thrown during the CWS. And both were running on fumes.

Webber figured his team’s only shot was to put 19-year-old Stan Payne on the mound to quell the Cowboy’s firepower long enough for Fleming to finish late. The plan paid off.

The freshman and Fleming

“It was one of the rare instances that I’ve been a part of that the game went according to script,” Suplee said.

Payne held his own, allowing five hits and one earned in a cool six-innings. But the Bulldog’s bats were quiet. They’d scored once in the fourth and fifth, providing a one-run cushion that quickly proved precarious after Fleming replaced the freshman.

Cowboy outfielder Brian Kelly doubled in the bottom of the seventh. A grounder moved him to third with one out. The next play was pivotal.

The infield was in when junior shortstop J.R. Showalter snagged a chopper and fired it to then-sophomore catcher Terry Childers at the plate.

Still with flashbacks to his concussion-inducing collision with Rutgers’ fullback-center fielder in Georgia’s CWS regional, Childers grabbed Showalter’s bullet and braced for impact.

Before Childers could say ‘Not again,’ Kelly smashed into the dinged-up Bulldog looking to tie the game ahead of the final frame. When the dust settled, Childers had hung on.

“The guy didn’t hit me nearly as hard as the guy did from Rutgers,” Childers said. “But it was kind of a redemption play. That’s something I’ll never forget either.”

Kelly was out, and the lead was preserved. But Childers’ throwing-hand pinky was broken for the second time in a month. Still in the game, he was nervous he wouldn’t be able to make the toss to second base if a Cowboy runner tried to steal into scoring position. He didn’t have to find out.

After a scoreless eighth and top-nine, Fleming quickly put the Cowboys away in the bottom of the ninth. Jeromy Bernitz, who went on to jack 315 home runs in the MLB, went down on strikes to start the half-inning. Fleming struck out the next two for good measure.

“Flem said [the final pitch] was right on the black,” then-senior Brian Jester said. “I said it looked like a pitchout.”

Whether a trick of the camera or a game-weary umpire ready to go home, Fleming sealed the deal. Oklahoma State returned to Stillwater with its third runner-up title in a decade. The Bulldogs left with Georgia baseball’s first and only CWS championship in its history.

"When you only give up one run to probably the best offensive team in college baseball in those years," Webber said. "I mean thats a huge accomplishment."

Usual on-field celebrations ensued as Fleming was tackled by his rejoicing teammates. The real revelry, however, would happen that night after the Bulldogs shared a meal with their family.

Jester described the evening as festive. Appleton was happy they showed up to the airport in the morning.

“I think it was about two in the morning,” Childers said. “We looked at each other and then we weren’t even in Nebraska anymore. So, I don’t think we got any sleep until we got on that plane the next day.”

The Bulldogs enjoyed a few days of congratulations, including an applauded return to Athens and a reception with Dooley before it was time move on.

It wasn’t until they were invited to the White House that the champions were back together, rubbing shoulders with Washington, D.C., big-wigs and shaking hands with President Bush.

Times passes. Banners hang, and national champions grow up. Several played in the minor leagues – Suplee for six years until he was 26 – and others stayed ­around baseball and collegiate athletics, including Webber, Appleton and Jester.

Fleming recorded 70 decisions over five seasons for the Seattle Mariners and Kansas City Royals. He went 17-10 for the Mariners in 1992, including seven complete games.

To his teammates’ sadness, Georgia’s only Most Outstanding Player in history, Mike Rebhan died of cancer on Feb. 27, 2019. His complete games against Stanford were the heart and blood of the team’s championship run, and his fellow Diamond Dogs consistently emphasized their friendship and appreciation of his leadership. Rebhan is remembered with a plaque in Foley Field’s team facilities, but as year-31 since the 1990 CWS approaches, Jester, Childers and Cooper want to see No. 31’s jersey retired in his memory.

“I think it’s a no brainer,” Childers said. “To be honest, I’ll be disappointed if it’s not retired.”

This week on The Front Page, we're revisiting a feat that has only happened once in University of Georgia history. The Red & Black sports editor, William Newlin, reported the story on the 30 year anniversary of when the Diamond Dogs won the College World Series in Omaha, Nebraska.