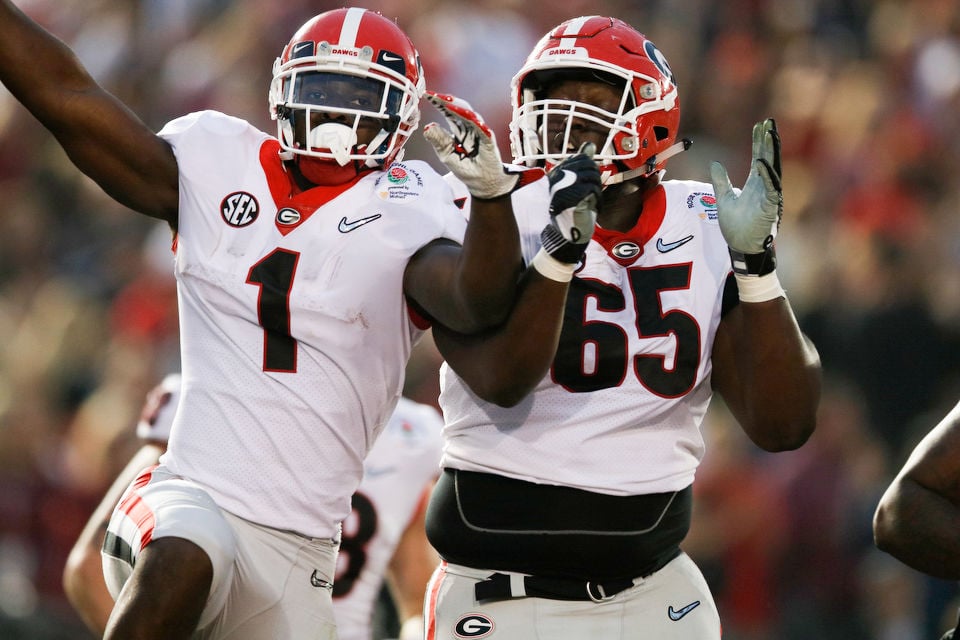 Georgia tailback Sony Michel (1) celebrates with Georgia offensive tackle Kendall Baker (65) after Michel makes a touchdown during the College Football Playoff Semifinals between the University of Georgia Bulldogs and the University of Oklahoma Sooners at the Rose Bowl Stadium in Pasadena, California, on Monday, January 1, 2018. (Photo/Reann Huber, www.reannhuber.com) 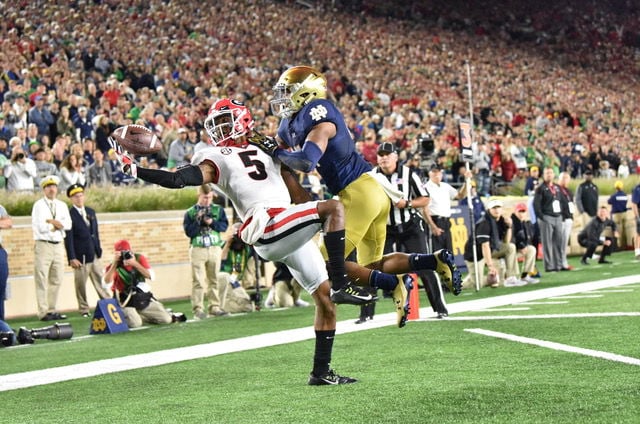 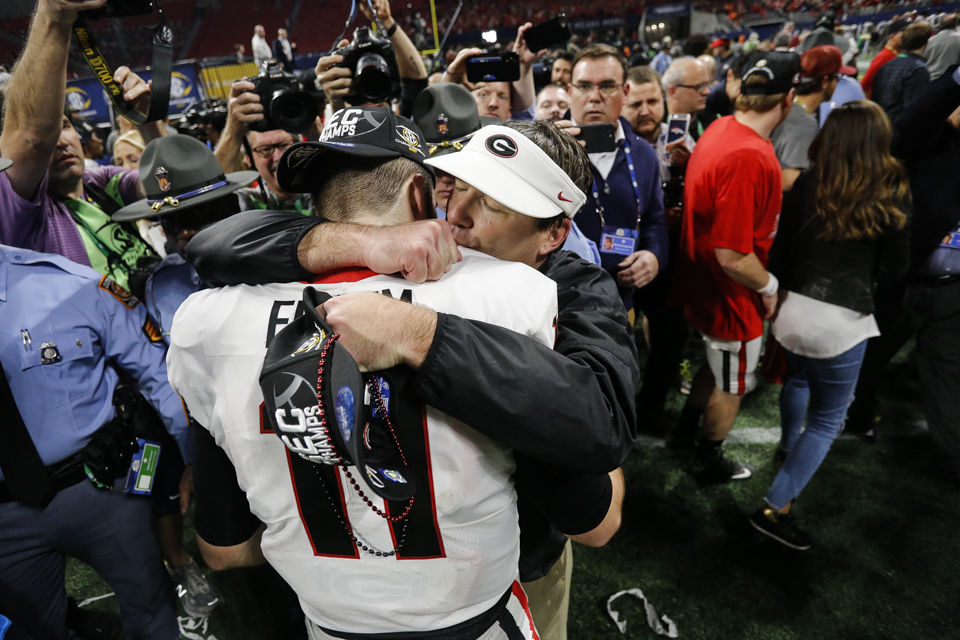 Georgia head coach Kirby Smart hugs quarterback Jake Fromm (11) after the end of the SEC Championship game between the No. 2 Auburn Tigers and the No. 6 Georgia Bulldogs in Mercedes-Benz Stadium on Dec. 2, 2017. (Photo/Casey Sykes, www.caseysykes.com) 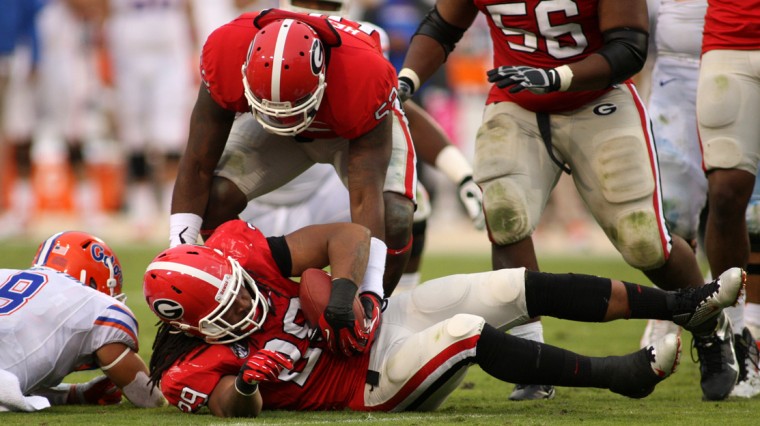 As the decade comes to a close, The Red & Black football writers counted down the top 10 most memorable Georgia football games from 2010-2019.

The 2018 Rose Bowl was Georgia’s most memorable win of the decade. After a redemptive SEC championship victory pushed the Bulldogs into the College Football Playoff, Georgia stared down a two-touchdown deficit at halftime to a Baker Mayfield-led Oklahoma squad. Cue a comeback for the history books. A dramatic blocked field goal and a game-winning touchdown run from Sony Michel after two overtime periods sent Georgia to Atlanta to play for a national championship. — Myan Patel

Georgia had a chance to win it all for the first time since 1980. After Davin Bellamy sacked Alabama’s freshman quarterback Tua Tagovailoa for a 16-yard loss in overtime, it looked close to a done deal. But one play later, Tagovailoa heaved a 41-yard touchdown pass to Devonta Smith to secure the victory for the Crimson Tide in one of the most dramatic college football games of the decade. — Henry Queen

Georgia’s victory over Notre Dame in 2017 set the tone for the rest of its season. The Bulldogs had almost 30,000 fans travel to South Bend to watch the back-and-forth game that came down to a couple of plays. Terry Godwin had a one-handed touchdown catch that was nearly impossible to pull off and at first ruled incomplete. Once overturned, his touchdown tied the game in the second quarter. The play that sealed the one-point win was Davin Bellamy’s strip sack of quarterback Brandon Wimbush for a loss of 11 yards. Lorenzo Carter was right behind to recover the football off a fumble and secure the win. — Anna Glenn Grove

Georgia lost to Auburn 40-17 just three weeks prior to the rematch in the 2017 SEC championship game. Coming in as the underdog, the Bulldogs’ defense contained the Tigers to just 259 total offensive yards and forced two turnovers. Freshman running back D’Andre Swift’s 64-yard touchdown run is what put the game far out of reach for Auburn. — Anna Glenn Grove

The 2012 SEC championship was full of stars — quarterbacks Aaron Murray and AJ McCarron joined Eddie Lacy, Todd Gurley and a young Amari Cooper. But everything went wrong in the final few minutes for Georgia. Head coach Mark Richt opted to run a play instead of spiking the ball with nine seconds left. Murray looked to throw a back-shoulder fade to Malcolm Mitchell. Instead, his pass was tipped, and Chris Conley caught it in bounds, bleeding out the final few seconds and Georgia’s SEC championship and national title hopes. — Myan Patel

The Volunteers and Bulldogs traded touchdowns in the last 10 seconds, but Tennessee had the last laugh. With under a minute left, Jacob Eason found Riley Ridley for a 51-yard touchdown pass to put Georgia up three points. Tennessee had rallied back from a 17-point deficit in the first quarter and was not afraid to add one more score with 10 seconds left. Quarterback Joshua Dobbs lobbed a 43-yard desperation pass into a sea of red jerseys in the end zone where Jauan Jennings made the winning catch. — Anna Glenn Grove

Turning the ball over six times isn’t usually a recipe for success. No. 2 Florida found that out the hard way when it fell to No. 10 Georgia. Todd Gurley ran for 144 yards, and Aaron Murray threw for 150 yards, but it was the defense that carried most of the weight by forcing four fumbles and two interceptions. It was the first time since 1988 that Georgia held Florida to zero touchdowns. The win helped the Bulldogs advance to the 2012 SEC championship game. — Henry Queen

For the second time in 2018, a backup quarterback led Alabama to a late-game triumph over Georgia. This time, Jalen Hurts starred for the Crimson Tide. Hurts had two touchdowns in the final quarter of the game, which was a contest where Georgia did not trail until 1:04 remained on the game clock. Jake Fromm had arguably his best game in a Georgia uniform, throwing for 301 yards and three touchdowns. But it still wasn’t enough to top the Nick Saban dynasty at Alabama. — Myan Patel

With 25 seconds left in the game, Auburn quarterback Nick Marshall threw a desperation, game-winning pass that bounced off Josh Harvey-Clemons then landed in perfect stride in the hands of Ricardo Louis. He wasn’t stopped, and the ‘Prayer at Jordan-Hare’ was born. Despite overcoming a 27-7 deficit, Georgia suffered defeat in stunning fashion and was unable to clinch the SEC East. — Myan Patel

Bulldogs in the NFL: Nick Chubb has big Week 11

With the NFL season heading down the stretch, here were some of the biggest performances from former Georgia players this week:

Even with the SEC championship and potential College Football Playoff berth still on the horizon, No. 4 Georgia isn’t scoffing over its in-state rival Georgia Tech.

Kirby Smart met with the media on Monday to preview the Georgia Tech game. He talked about the Yellow Jackets’ new offense, Georgia’s Thanksgiving schedule and provided injury updates.

The Georgia football team has found a home away from home at Bobby Dodd Stadium in Atlanta.

As the decade comes to a close, The Red & Black football writers ranked the best Georgia football players from 2010-19.