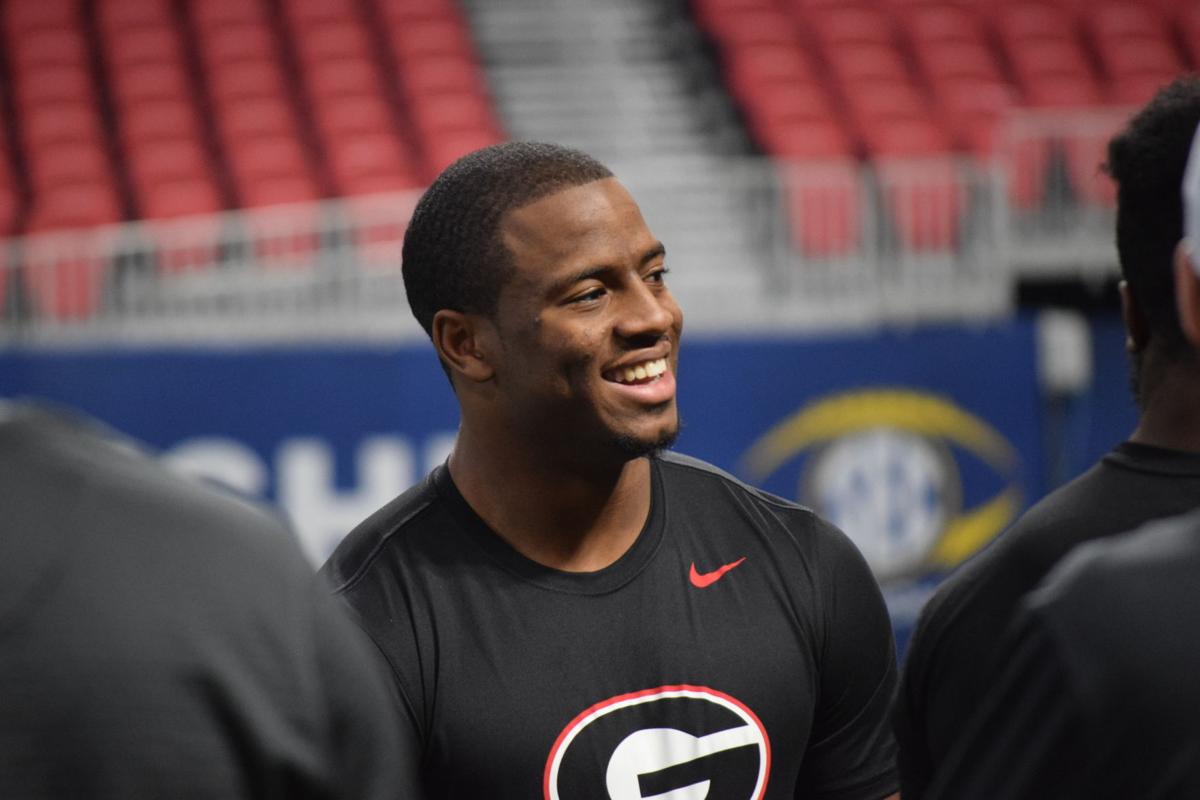 After spending four years with the Bulldogs, running back Nick Chubb has become the second leading rusher in SEC history, standing only behind Georgia great Herschel Walker. 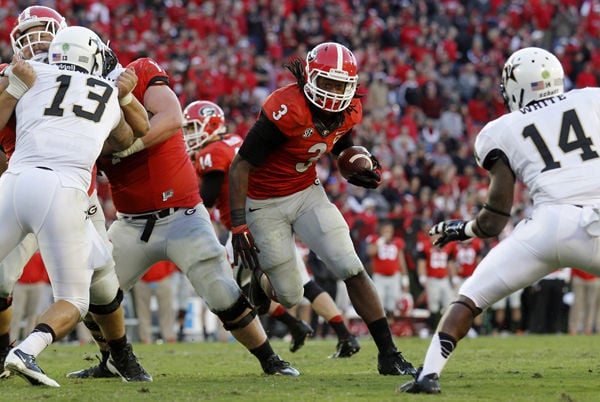 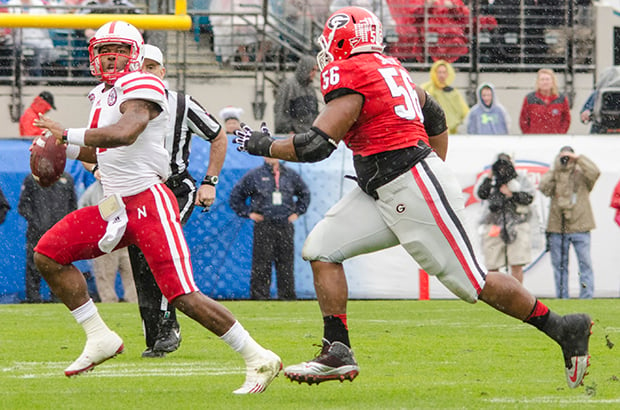 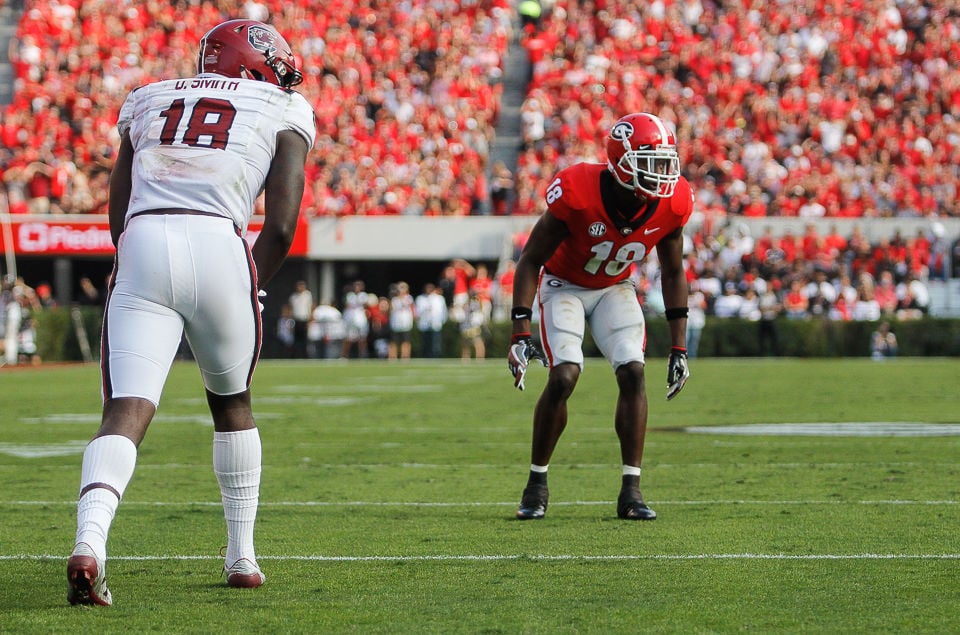 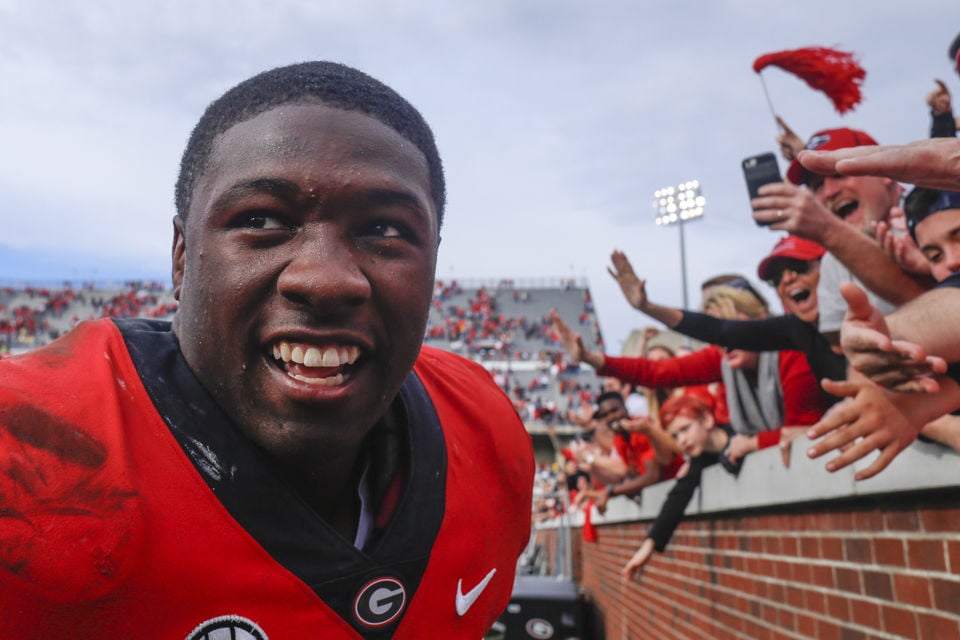 Georgia linebacker Roquan Smith (3) celebrates with fans after the end of a college football game between Georgia and Georgia Tech at Bobby Dodd Stadium in Atlanta, Georgia, on Saturday, Nov. 25, 2017. Georgia went on to finish the regular season 11-1 with a 38-7 win over Tech before heading to the SEC Championship in Atlanta. (Photo/Casey Sykes, www.caseysykes.com) 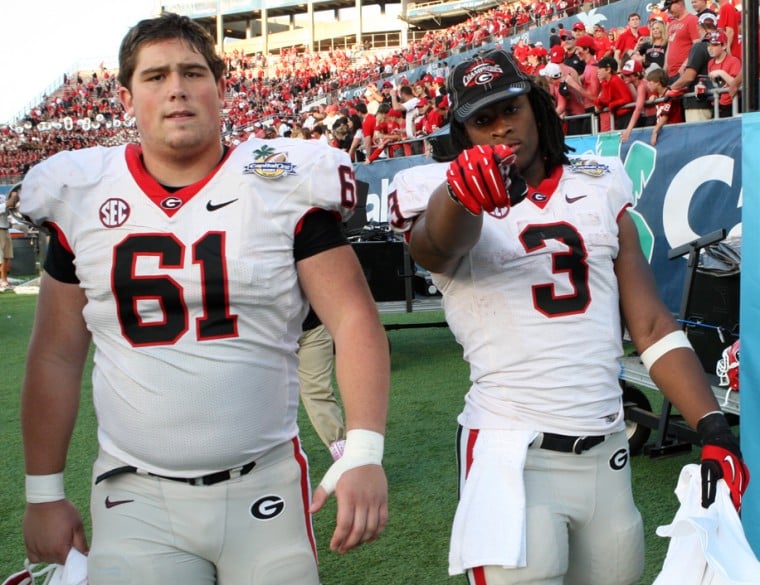 As the decade comes to a close, The Red & Black football writers ranked the best Georgia football players from 2010-19. The list includes seven offensive players,  seven defensive players and two special teams players with representatives from each position.

Chubb was one of four permanent team captains on the 2017 roster and was named offensive co-MVP. He finished his career with 4,796 rushing yards, just one spot behind Herschel Walker on the SEC’s list of all-time career leaders. Chubb is now a Cleveland Brown and the NFL’s 2019 rushing leader with 1,281 yards. — Anna Glenn Grove

Gurley spent three seasons at Georgia from 2012-14 and finished his college career as one of the best running backs in the history of Georgia football. He has the fourth-most rushing yards of any Georgia running back with 3,285. If not for a four-game suspension and subsequent season-ending knee injury in his junior season, he may well have been higher. Gurley has the second-highest yards-per-rush in school history, averaging 6.4 yards-per-attempt and now plays for the Los Angeles Rams. — Nathan Moore

King is third in Georgia history with 21 career touchdown receptions, nine of which came in the 2012 season. A.J. Green had 23 touchdown catches but played the majority of his career before the decade began. King, who was picked in the fifth round of the 2013 NFL draft, finished with 136 receptions at Georgia. — Henry Queen

Mitchell had an immediate impact upon arriving to Georgia. He recorded 45 receptions for 665 yards as a freshman and was named to the SEC’s All-Freshman team. As a sophomore, he played both receiver and defensive back. Mitchell suffered a season-ending knee injury after celebrating a touchdown in Georgia’s first game of 2013. He returned in 2014 and became the Bulldogs’ leading receiver in 2015. — Anna Glenn Grove

The latest Fox Sports mock draft predicts that Thomas will be picked No. 2 overall in the 2020 NFL draft. A semifinalist for the 2019 Outland Trophy, Thomas started every game at left tackle this season. He has competed in a total of 41 games since his arrival in 2015. — Henry Queen

Andrews never missed a game after securing the starting center job his sophomore year in 2012, starting an impressive 40 straight games. He was voted Georgia’s offensive MVP by his teammates after his junior season and was one of the nation’s top six centers his senior year as a finalist for the Rimington Trophy. — Nathan Moore

Now a four-time Pro Bowler in the NFL, Houston is one of the best defenders of the decade — college or pro. He only played three seasons at Georgia before being drafted in the third round of the 2011 draft, but Houston finished with 20 career sacks. 10 sacks came in 2010 when he was a first team All-SEC selection and an All-American. — Nathan Moore

Smith played at Georgia from 2010-13 and improved as his career progressed. Recording just three tackles his freshman year, Smith finished with 145 career tackles. He wasn’t selected in the 2014 NFL Draft but signed with the Miami Dolphins as a rookie free agent. Smith then made his way to six different NFL teams and has now landed in the XFL with the New York Guardians. — Anna Glenn Grove

Jones is Georgia’s best pass rusher of the past 10 years. He finished his career in Athens with 28 sacks despite playing for just two seasons after transferring from USC. Jones holds Georgia’s single-season record for sacks with 14.5 and was drafted in the first round of the 2013 NFL draft by the Pittsburgh Steelers. —Nathan Moore

Smith played at Georgia for just two seasons but still earned himself a career in the NFL. He emerged as the top dog in his junior year, recording 137 total tackles in his final season. That season, Smith led Georgia in total stops and earned the title of defensive MVP. The same year, Smith was named the winner of the Butkus Award given to the nation’s top linebacker. He was picked No. 8 overall in the 2018 NFL draft. — Anna Glenn Grove

Tied for the most career interceptions in school history with 16, Rambo appeared in at least 10 games in each of his four seasons at Georgia. He totaled 235 career tackles and scored three defensive touchdowns. — Nathan Moore

Baker finished his career at Georgia with 116 tackles. The winner of the 2018 Jim Thorpe Award, Baker was selected by the New York Giants with the No. 30 overall pick in the NFL draft. — Henry Queen

Only two of Boykin’s four seasons at Georgia fell between 2010-19, but he was able to do enough in those two years to earn top honors. The cornerback from Atlanta had three interceptions in both 2010 and 2011. After his senior year when he had 55 total tackles, Boykin won the Paul Hornung Award, which is given to the nation’s most versatile player. — Henry Queen

Blankenship will finish his illustrious collegiate career on Jan. 1 in the Sugar Bowl as Georgia's all-time leader in points. He has yet to miss an extra point and currently has a career field goal percentage of 82.11%. — Henry Queen

Butler finished his career as Georgia's all-time leader in yards per punt. He played his last two seasons in 2010 and 2011, totaling 108 punts in this decade. — Henry Queen

Familiar foes: A look at Georgia’s recent history against the Big 12 ahead of Sugar Bowl matchup with Baylor

The No. 5 Georgia Bulldogs will face No. 7 Baylor in their second straight Sugar Bowl in New Orleans after a loss to No. 1 LSU in the SEC championship eliminated them from College Football Playoff contention.

Three Georgia football players are looking for new teams as they have entered the transfer portal.