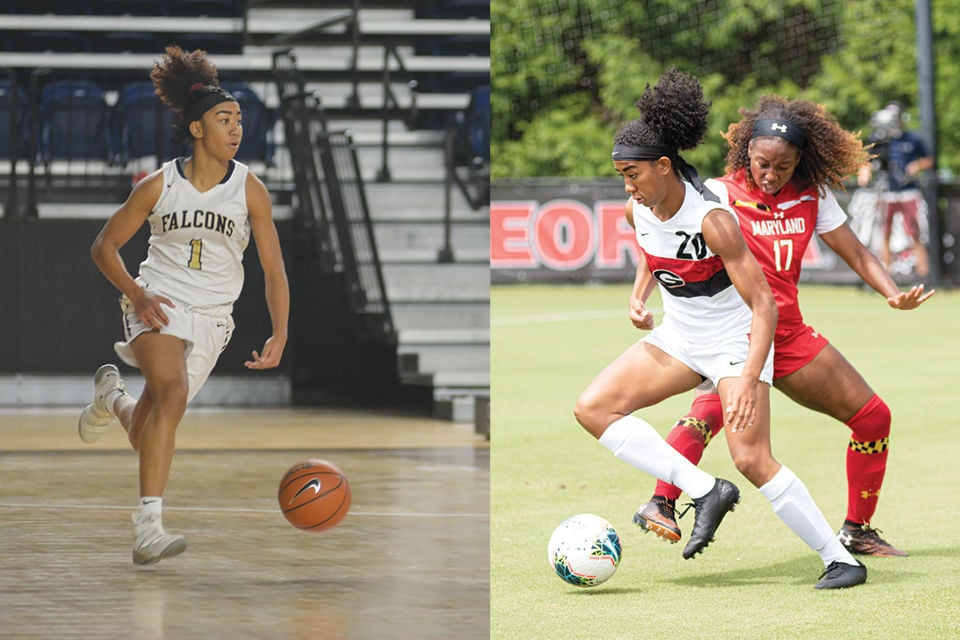 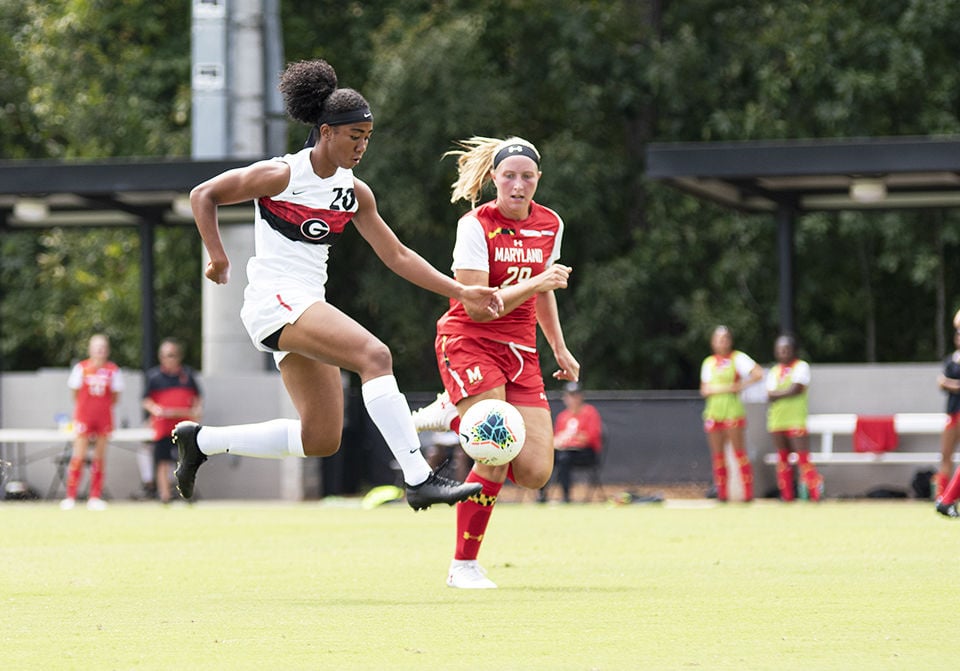 Chloe Chapman (20) jumps in the air in pursuit of the ball. The University of Georgia soccer team hosted the University of Maryland to shut them out with a final score of 5-0 on Sep 1, 2019 in Athens, Georgia. (Photo/ Kathryn Skeean kathrynskeeanphoto@gmail.com)

A 4-year-old Chloe Chapman stood in her front yard 14 years ago, playing with her new plastic golf clubs. She tossed the ball up, swung and connected every time.

Her father watched on in disbelief.

“To have that hand-eye coordination at that age, unbelievable,” Erik Chapman said. “I knew she was an athlete.”

Chapman is now a member of both the Georgia soccer and women’s basketball teams, and she is beginning to show Georgia fans how multifaceted she can be.

Jim Bruno, head soccer coach at Chapman’s alma mater, Our Lady of Good Counsel, said Chapman is the fastest player he has ever seen. Chapman was ranked the No. 8 point guard in the country by espnW and was a five-star women’s basketball prospect in the class of 2019. Before she takes the court, Chapman has become the leading goal scorer for Georgia soccer.

Even during a 90-degree soccer practice, Chapman doesn’t break a sweat. Standing at 5 feet, 8 inches, she holds herself with an easygoing confidence. Aside from the scorching September heat, the Mitchellville, Maryland, native is getting used to living Georgia.

“So far since I’ve been here, I’ve become accustomed to it,” Chapman said. “I really like the area and being able to call a new place home.”

“She’s really fast,” Cartrett said. “I saw her at a summer practice and I remember thinking, ‘Thank God she’s on our team.’”

From “mini-mix” co-ed basketball in kindergarten to the summer before graduating high school, he avoided giving Chapman special treatment in regards to playing time or criticism, despite her status as a high-profile athlete. A quarterback for Virginia Tech from 1986-87, Chapman’s father liked telling her to do three things — absorb everything, interpret then make your next move.

Chapman grew up fast, playing with older age groups including her older sister, Sydney. Four years Chapman’s senior, Sydney was always competitive when they played together. It wasn’t until Sydney went to college that the sisters got closer, and now they talk on the phone after all of Chapman’s games.

While many kids would find playing with the big kids intimidating, Chapman came to realize it helped her grow emotionally and mentally. In eighth grade, she played travel basketball with girls three years older than her. Her teammates were talking about prom dates and the SAT, and Chapman still hadn’t even started high school.

“When the older girls came to visit, Chloe would hang with them,” Erik Chapman said. “She was always the one in the middle, it wasn’t like, ‘Leave the little girl back, she’s too immature.’ I think she just matured that way.”

As a high school freshman, Chapman made the varsity squad, surpassing the freshman and junior varsity soccer teams.

“She didn’t have an official leadership [role], but the kids would look to her for a lot of different things,” said Jim Bruno, Chapman’s high school soccer coach. “You could tell she was that kind of person.”

Not giving up soccer

Chapman received her first basketball scholarship offer in sixth grade, seven years before she could step foot on a college campus.

By the next year, she had around 20 college coaches coming to her basketball games. In eighth grade, the number swelled to about 50.

After Chapman’s ninth grade year, Erik Chapman compiled a soccer highlight reel for colleges. She couldn’t devote any more time to soccer outside of the high school season since she played basketball during the club soccer season.

“Going into high school, I never imagined playing two sports in college [but] I never imagined giving up soccer [either],” Chapman said. “Toward the end of junior year, I thought, ‘No, I’m not going to give up soccer.’”

Chapman and her family didn’t realize she could continue to play both sports until the calls came flooding in from soccer coaches. From then on, the Chapmans only considered offers from schools that would provide that opportunity. One of those schools was Georgia.

Chapman piqued both Georgia coaches’ interests as a potential addition to their respective teams. Women’s basketball head coach Joni Taylor saw a level of thinking in Chapman she wasn’t expecting from a ninth-grade recruit.

“She had a plan, she had a purpose and she knew how she was going to attack that plan,” Taylor said.

“Speaking to her on the phone during part of the process and to hear her talk, very little of the emphasis was on her, it was about the team,” Lesesne said. “I knew we were getting a good person [and a] player that put team first.”

Before making her way onto the soccer pitch, Chapman spread her energetic personality to the basketball court. The freshman spent the summer with the women’s basketball team, prepping for a round of international games in Italy at the end of July.

Chapman’s basketball family now comes to support her at the Turner Soccer Complex. When she takes the field, they cheer and hold up homemade signs.

Taylor tweeted that watching Chapman play soccer is part of her Sunday schedule.

Cartrett connected with Chapman’s energy early in the season as they roomed together on away trips, making TikTok videos in their hotel and racing each other to the team bus.

“She’s really funny [and] very humble to be as talented as she is,” Cartrett said. “She sings literally all the time, to the point where my head is going to explode, but I also love it.”

The rest of her teammates quickly came to love her, exemplified by their reaction to her first two goals for the Bulldogs against her home state school, Maryland.

Chapman scored twice in the last ten minutes to punctuate the 5-0 blowout of the Terps.

“The bench exploded and they were so excited,” Lesesne said. “Half [of] the team ran jumping up and down and you could see that genuine care and excitement that our players had for her, and Chloe for the team.”

From hitting golf balls as a toddler to becoming a dual athlete at Georgia, Chapman never lost her cool.

“Her composure is one of my favorite things about her,” Bruno said. “She always handled it well, never let it go to her head. You wouldn’t know she was a highly-touted athlete. She’s just a teenage kid.”

The University of Georgia Lady Bulldog basketball team is set for an 11-day journey in Italy, where the squad will play three games.

Winning the first five minutes wasn’t enough for the Georgia soccer team on Thursday night, as they drew with LSU 1-1.

An early goal seemed to set the offensive tone for the Georgia women’s soccer team Thursday night, but an effective opposing goalkeeper and imprecise chances in front of the goal were enough to keep the Bulldogs from a win over the LSU Tigers.

The UGA women’s basketball team claimed its first win of the season as it defeated the Kennesaw State Owls 80-65 on the opening night of the 2019 season.