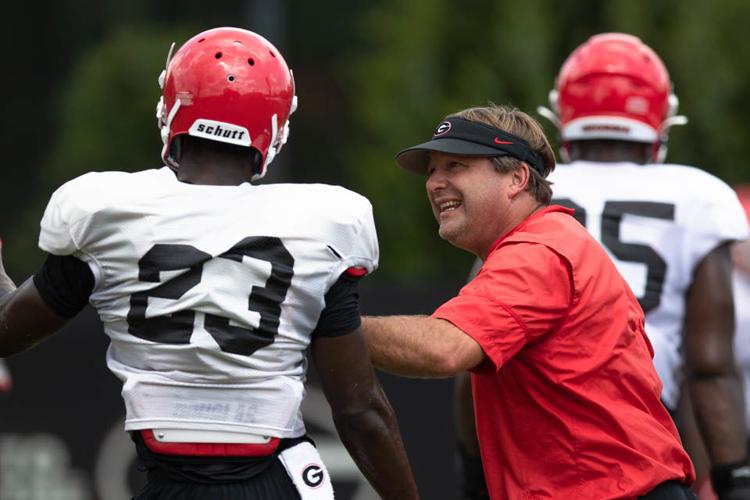 Georgia head football coach Kirby Smart talks to defensive back Mark Webb (23) during football practice on Tuesday, Aug. 13, 2019, in Athens, Georgia. The Bulldogs will play their first game of the 2019 season away at Vanderbilt on Saturday, Aug. 31. (Photo/Gabriella Audi, www.gabbyaudi10.wixsite.com/mysite-1) 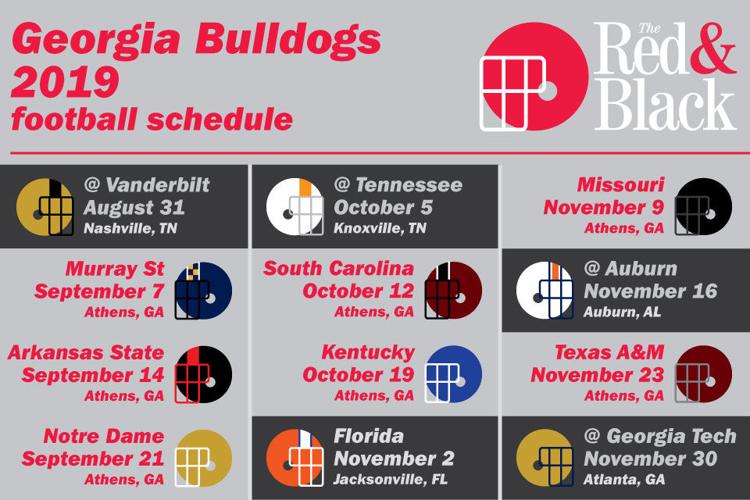 Predict and bet all you want, but the Georgia football team isn’t paying any attention.

After going 24-5 over the past two seasons, the Bulldogs are in rare territory. For the first time in program history, the Associated Press ranked Georgia in the top five in its preseason poll two seasons in a row.

But head coach Kirby Smart and his team don’t seem to care about the hype. To hear them talk, the Bulldogs are focused on one thing: Vanderbilt, which they play on Aug. 31 to kick off the season. It may sound cheesy, but Smart has successfully installed a mindset that prioritizes the next opponent rather than the one looming large — Alabama.

“We’re not really looking at anything on the outside,” quarterback Jake Fromm said. “We’re kind of zoned in.”

Alabama was chosen by 253 media members to win the SEC West. Georgia received 233 votes to win the SEC East. Florida was the next closest team with 21 votes. Smart doesn’t buy it.

Having thrown for 5,364 yards and 54 touchdowns the past two seasons while outlasting former Georgia quarterbacks Jacob Eason and Justin Fields, Fromm said he has gotten better at establishing his priorities.

Fromm said the offense wants to get better in the red zone and on third down. Last year, the Bulldogs had 40 touchdowns and 14 field goals in 60 red zone appearances. They converted 77 of their 162 third downs.

The defense wants to increase its “havoc rate,” which means it will try to deflect more passes and create more turnovers. Last year, Georgia ranked 89th in Division I with 17 turnovers forced. For Georgia, the pressure to improve comes from within. So the Bulldogs have to live up to expectations, but they are of their own making.

“If we have those expectations of ourselves, it really doesn’t matter what the outside world says,” Smart said. “We’re not going to be affected by what someone else says … There’s no team that has deserved any ranking.”

Vince Dooley remembers the obstacles of facing an SEC opponent on the road in week one of the season.

When you shift your gaze off the football field to the over 90,000 fans gathered in Sanford Stadium each home game, you’ll encounter a sea of …

'I’m not scared of anybody': Georgia linebacker Monty Rice refuses to give in

Monty Rice has no problem being aggressive.

Behind Enemy Bylines: Previewing No. 3 Georgia vs. Vanderbilt

The Associated Press released its annual preseason poll on Aug. 19. No. 1 Clemson will only play two teams ranked in the AP Top 25, and No. 2 Alabama has three such teams on its schedule. Other teams aren’t so lucky. Here’s a ranking of the toughest schedules among teams in the preseason AP Top 10.

NASHVILLE — No. 3 Georgia leads Vanderbilt 21-6 at the half thanks to a strong offensive performance, but the Commodores added two field goals just before halftime. Here are some takeaways from the first half.