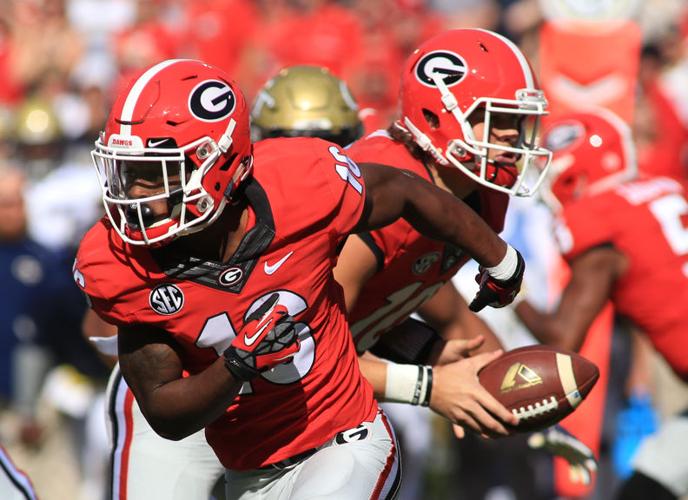 Georgia wide receiver Isaiah McKenzie (16) runs past Georgia quarterback Jacob Eason (10) to fake a pass off during the first half of a NCAA college football game between Georgia and Georgia Tech, in Athens, GA., on Saturday, November 26, 2016. (Henry Taylor htaylor@randb.com) 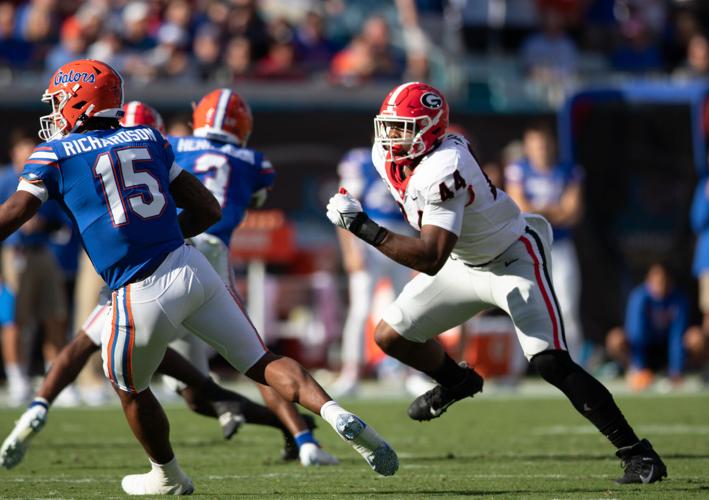 Georgia wide receiver Isaiah McKenzie (16) runs past Georgia quarterback Jacob Eason (10) to fake a pass off during the first half of a NCAA college football game between Georgia and Georgia Tech, in Athens, GA., on Saturday, November 26, 2016. (Henry Taylor htaylor@randb.com)

Isaiah McKenzie, a former stand-out wide receiver at Georgia from 2014-2016, now has a golden opportunity to open eyes at the next level.

Similar to his time as a Bulldog, McKenzie is not the number one wide receiver for the Buffalo Bills.

With Georgia, he spent most of his time as a kick returner before the coaching switch from Mark Richt to current head coach Kirby Smart. However, in his third season with the team, he became the first option in Georgia's passing attack, amassing 633 yards and seven touchdowns.

Given the lack of production throughout his career and the lack of extensive physical tools – McKenzie only being 5'8" – his draft stock was not high.

McKenzie only played in eight games for the Broncos and was eventually waived after his rookie year. The Bills signed him from waivers soon after, but his play time has fluctuated as he struggled to excel in a competitive wide receiver room.

The Bills released their former starting slot receiver, Cole Beasley, earlier this offseason but signed seven-year NFL veteran Jamison Crowder to a one-year deal less than a week later. McKenzie will now compete with Crowder for the third wide receiver spot in this offense. He recognized this opportunity and now looks to build a stronger chemistry with Josh Allen throughout the summer.

"At the end of the day, when the opportunity comes, I gotta just seize it, and I feel like I've been doing a good job of that each and every year," McKenzie said in a press conference following a minicamp practice in June. "Now that my role's getting bigger, I want to keep seizing those opportunities and help the team win."

Travon Walker – the first-overall pick in the 2022 NFL Draft – played exceptionally as one of the leaders for the defense of the aforementioned 2021 national champion Bulldogs.

Prior to his enrollment at the University of Georgia, Walker was a multi-sport athlete at Upson-Lee High. He was recruited to UGA as a five-star defensive lineman in the 2019 recruiting cycle.

At Georgia, Walker competed for time on the field with other star defensive players. However, he won the full-time starting position at defensive tackle for the Bulldogs in the 2021 season. He poured in 37 total tackles, and 36 QB hurries as part of a nearly-perfect defensive season by Georgia.

The Jacksonville Jaguars saw Walker's impact for the Bulldogs and his potential to be dominant at the next level, bringing him into Duval County to bolster their defense that ranked in the bottom half of the league.

According to 247 Sports, Walker projects as a high-upside pass-rusher for the Jacksonville defense, regardless of the lack of production compared to what would be expected from a first-overall draft pick.

"Of course, I'm going in with something to prove, but I'm not going to make it any harder than supposed to be," Walker said in an interview with Good Morning America, responding to those who believe he's being drafted for his potential.

"Just go out there and play football – something that I've been doing my whole life, and don't make it harder than it's supposed to be."

The offseason for the defending national champions has been busy since Georgia won against Alabama on Jan. 10.

Bulldogs in the NFL: Updates on Matthew Stafford and Sony Michel

The 2021 Georgia Bulldogs football team was not the only one that ended their season with a ring, as former Georgia quarterback Matthew Stafford reached the mountain-top this year.

The University of Georgia Athletic Association approved a new student ticket football policy, which will prioritize class year over number of …

The 122nd United States Open Championship occurred this past week, and featured several golfers who once attended the University of Georgia, though none of them emerged victorious in the end.