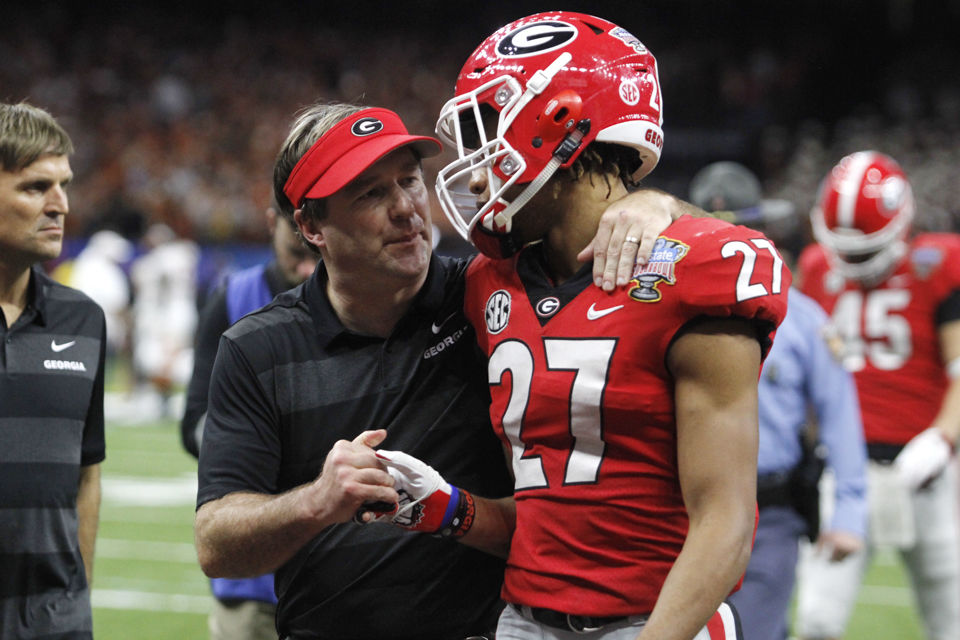 Kirby Smart, head coach of the University of Georgia football team walks off the field with Eric Stokes, a redshirt freshman defensive back, after the second half of the 2019 Allstate Sugar Bowl on Tuesday, January 1, 2019 at the Mercedes-Benz Superdome in New Orleans. The Texas Longhorns beat the Georgia Bulldogs 28-21. (Photo/Christina R. Matacotta, crmatacotta@gmail.com) 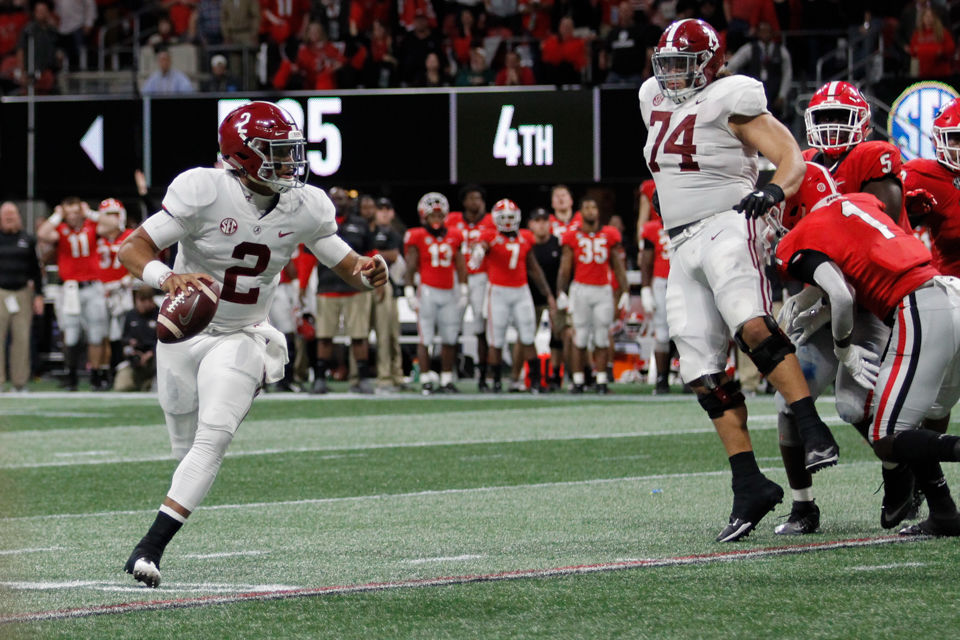 On paper, the 2018 Georgia football season looks like  a successful one that fans envisioned in August.

The Bulldogs finished the regular season 11-1 for the second straight year, lost by a touchdown in the SEC Championship Game to Alabama and earned a place in the Sugar Bowl. Considering everything the team lost from 2017, that looks like a great season.

But those are just facts. There is also the eye test, and those observations tell a slightly different story than the team’s 11-3 final record might suggest.

This team did what it had to do against lower competition. But on the biggest stages, the Bulldogs showed just enough cracks to prove they weren’t quite good enough for a shot at the national title.

Throughout the season, the Bulldogs showed flashes of greatness. They throttled South Carolina 41-17 on the road in the second week of the season, and they smashed Kentucky 34-17 in Lexington to claim the SEC East division title.

On the other hand, there was a strange 43-29 win over Missouri that saw a young defense show cracks for the first time. The next week saw a mediocre Tennessee team creep to within 12 points in the fourth quarter before the Bulldogs pulled away.

Throughout the season, Georgia’s rushing attack often wore opponents down while its rushing defense, while not spectacular, was usually solid enough to keep opponents in line.

But the tables turned in two of the biggest games of the season. In losses to LSU and Texas, the Bulldogs were outrushed 453-185.

No game proves the somewhat up-and-down nature of the team better than the biggest game of the year -— the SEC title game against Alabama. The Bulldogs looked like one of the best teams in the country early on and built a 28-14 second half lead.

But down the stretch, the offense sputtered and the defense yielded 21 straight points, 14 coming at the hands of backup QB Jalen Hurts in a twist of fate reminiscent of last year’s national title game.

Looking at the numbers at season’s end — an 11-3 record, another SEC East title and a No. 7 final ranking in the AP poll — Georgia looks like a team primed to contend for the national championship in 2019. But the team’s on-field performance raises questions that need to be answered before that can happen.

While the offense looks relatively stable with the exception of receiver, the defense is littered with spots of concern. The Bulldogs need to replace Jonathan Ledbetter on the defensive line, Juwan Taylor, Natrez Patrick and D’Andre Walker at linebacker and Deandre Baker in the secondary.

The young defenders will be better with another year of experience. But the run defense will have to be stout on a more consistent basis, and the secondary will have to prove it can withstand the loss of one of the best cornerbacks in Georgia history.

Now, the Bulldogs enter the offseason similar to how they went into last offseason, with plenty of good on both sides of the ball but still a few lingering questions. If they want to return to the form of 2017, those questions will have to be answered more definitively in 2019.

The early signing period has passed, but National Signing Day is soon approaching on Feb. 6. Here is a look at where Georgia’s 2019 class stands and what is left on the table for the Bulldogs.

Multiple reports surfaced on Tuesday night indicating that Georgia offensive coordinator Jim Chaney was leaving for the same position at Tennessee. Here are a few potential candidates that could make sense as Chaney’s replacement.

Kirby Smart took a huge gamble with a little more than three minutes left in the 2018 SEC Championship Game against Alabama. The Crimson Tide had all of the momentum with the score tied at 28, and Smart made a risky call to take it back on 4th-and-11 from the 50-yard line. The Bulldogs dialed up a disastrous fake punt, and Alabama took over at its own 48, setting up a short field for Jalen Hurts, who scored the game-winning touchdown on the ensuing drive.

After a Sugar Bowl loss to the Texas Longhorns closed out Georgia’s season, the Bulldogs suffered more critical losses later in the week. Four Georgia juniors declared for the 2019 NFL Draft and two other players announced their decisions to transfer.

Georgia not only found a replacement for Jim Chaney at offensive coordinator, but the Bulldogs also hired a new tight end coach.