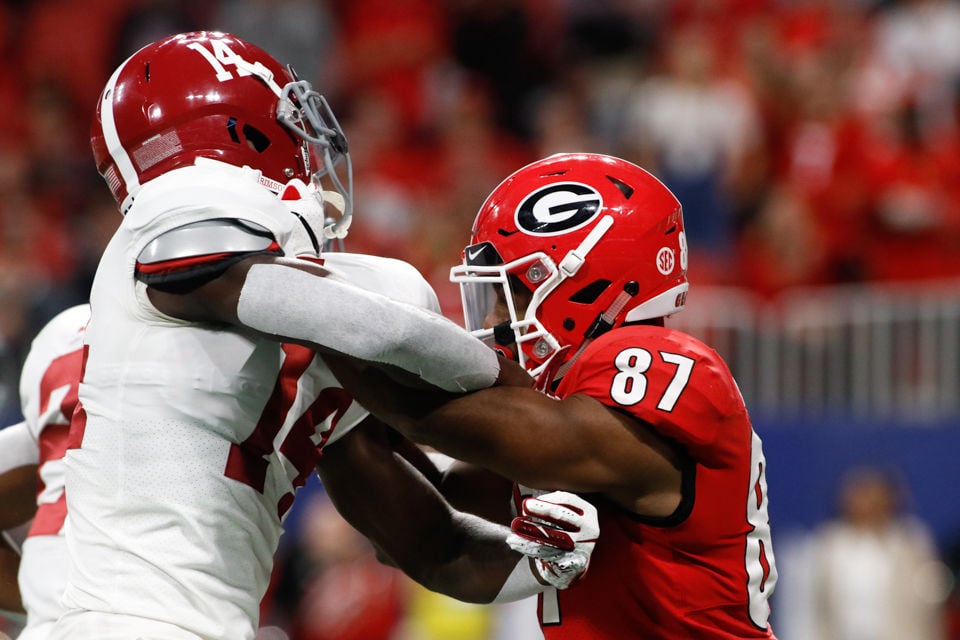 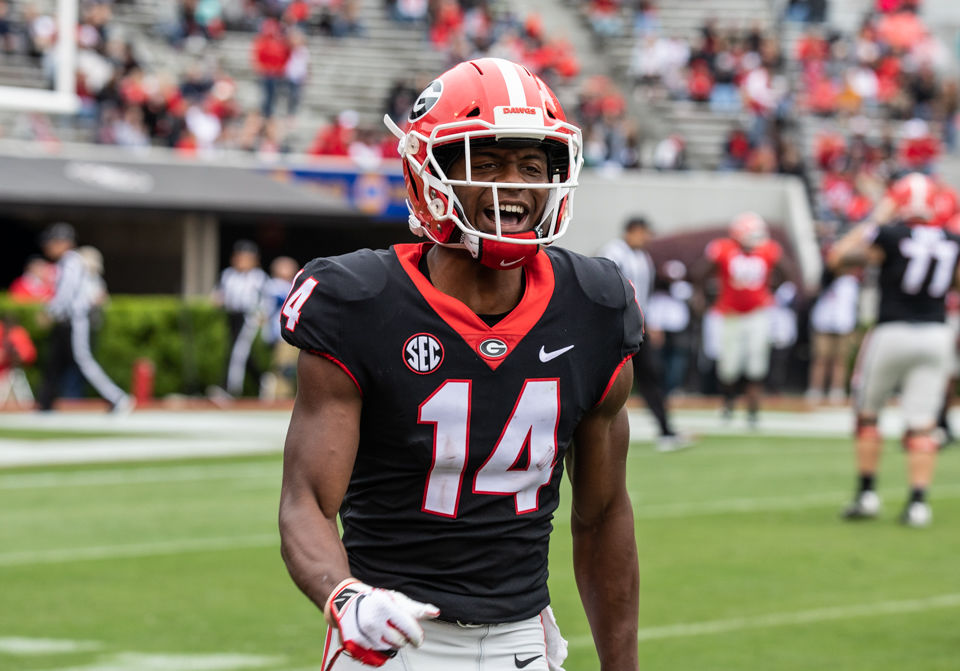 Georgia wide receiver Trey Blount (14) cheers to the sideline after the black team scored. The red team won the scrimmage with a score of 22-17. (Photo/Ryan Cameron rac86114@uga.edu)

Before Georgia's season starts on Aug. 31 against Vanderbilt, The Red & Black is analyzing the depth chart of each position group in a 10-part series. Part three focuses on the wide receivers.

Simmons leads Georgia’s returning wide receivers, despite recording only nine receptions for 138 yards in 2018. The senior’s career includes 14 total receptions for 183 yards and is highlighted by a 71-yard catch against UMass last season.

Simmons has taken a majority of first-team reps throughout preseason practice and competed with the first-team offense at the G-Day scrimmage in April, totaling three catches for 46 yards.

Cager brings the most in-game experience to the Bulldogs’ roster.

The graduate transfer from Miami led the Hurricanes last season in touchdown catches (6) and yards per catch (17.8), and accounted for 374 yards on 21 receptions. He started in 12 of Miami’s 13 games, catching at least one pass in each of the 12 games.

Standing at 6-foot-5, Cager is one of Georgia’s tallest receivers. He has taken first and second-team reps throughout fall practice.

A freshman standout, Pickens drew attention after a video of his impressive one-handed grab from Georgia’s first fall scrimmage on Aug. 10 surfaced online.

Georgia receiving corps looks to make up for lost production

The 6-foot-3, 190 pound Hoover, Alabama, native came to Georgia as a five-star prospect and was ranked the No. 4 wide receiver in the nation, according to the 247Sports Composite.

Blount returns for his third season with the Bulldogs totaling three receptions for 39 yards from last year. He’s seen action in all 28 games of his first two seasons but has yet to emerge as a consistent pass catcher.

The 6-foot-2 junior led the Black team with 69 receiving yards on G-Day and has been getting reps at second team throughout preseason practice.

Landers, a redshirt sophomore, has seen action in only four games (Austin Peay, Middle Tennessee State, Vanderbilt and UMass) and has yet to record a reception in his career.

But the 6-foot-5, 200 pound wideout had an exciting G-Day, totaling 54 receiving yards for the Black team and starring in one of the scrimmage’s most memorable plays. Landers, a wide receiver, threw a 39-yard touchdown pass to freshman quarterback D’Wan Mathis. He also had a 52-yard catch, the longest play of the game.

Robertson, a redshirt junior transfer from California, looks to emerge in 2019 after failing to catch a pass in his first season with the Bulldogs.

The 6-foot, 190-pound wideout received Freshman All-American honors in 2016 with 50 receptions for 767 yards and seven touchdowns in his first season at Cal. An early injury during his sophomore year caused him to medically redshirt before his transfer to Georgia.

Last season, Robertson didn’t record a catch, but he accounted for 109 rushing yards. The Savannah, Georgia, native has worked both in the slot and outside positions.

Dominick Blaylock, a 6-foot-1 freshman from Marietta, Georgia, has also garnered preseason attention as a potential slot receiver to fit in Georgia’s offense.

Georgia football debuts at No. 3 on AP preseason poll

Georgia is getting more and more familiar with being near the top of the college football world.

Before Georgia's season starts on Aug. 31 against Vanderbilt, The Red & Black is analyzing the depth chart of each position group in a 10-part series. Part two focuses on the running backs.

Before Georgia's season starts on Aug. 31 against Vanderbilt, The Red & Black is analyzing the depth chart of each position group in a 10-part series. Part one focuses on the quarterbacks.

Georgia football opened practice to the media for 11 minutes on Tuesday. Here are some observations from the Red & Black.

Now in his final year of eligibility as a graduate transfer for the Bulldogs, Lawrence Cager is looking to get the most out of his final collegiate opportunity.