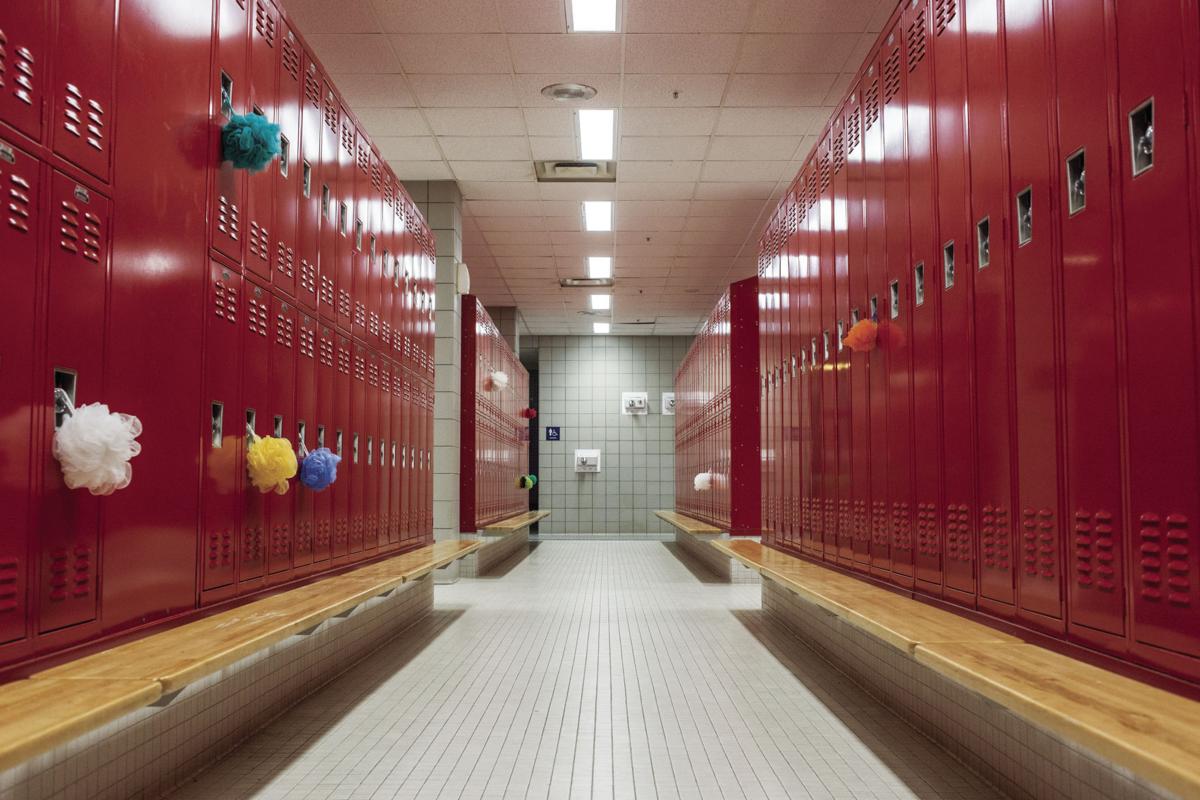 UGA sports teams do not agree with presidential candidate Donald Trump on what he considers 'locker room talk.' 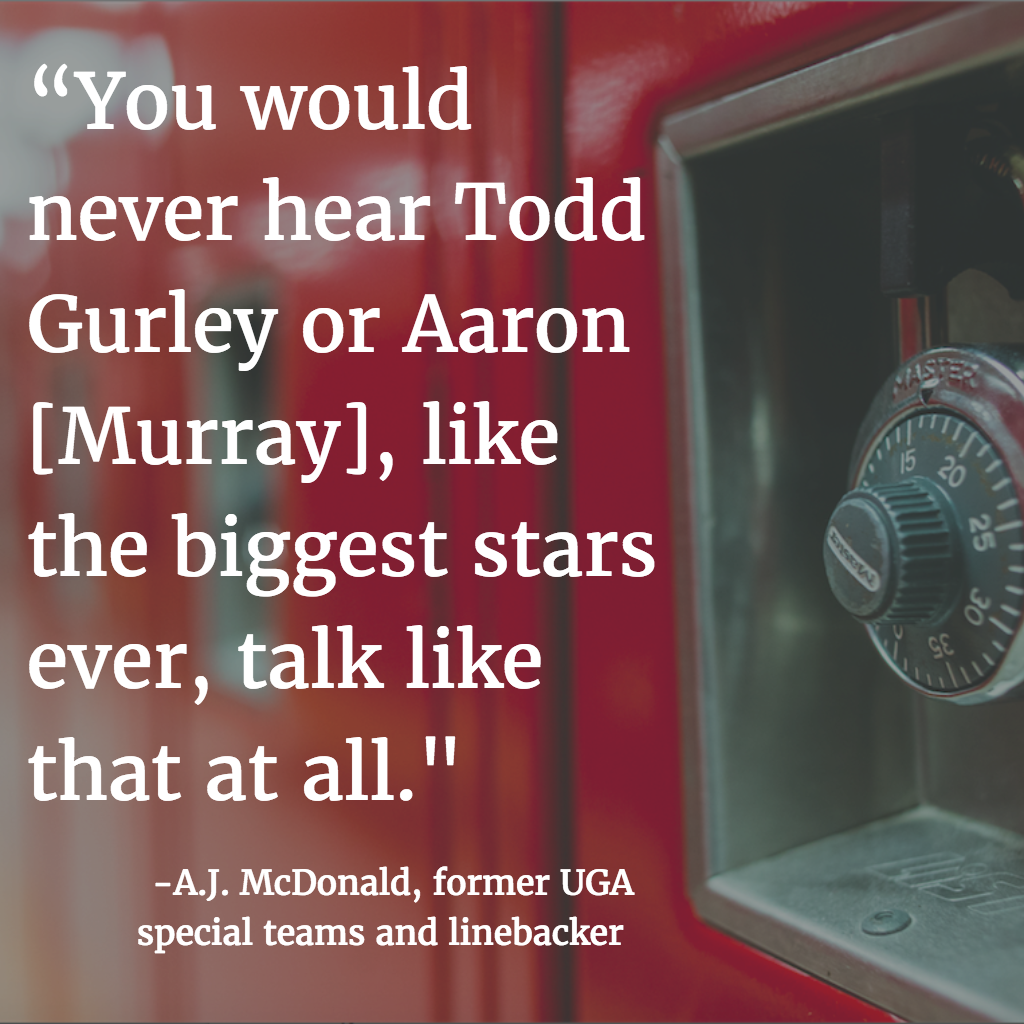 A men’s locker room reeks of sweat, unwashed clothing and too much deodorant. It can be a gross and unpleasant place to spend more than the necessary minutes to change clothes.

But a locker room is more than just a place to change. It’s a place for re-living victories, recovering from crushing losses and sharing life moments with teammates.

For Republican presidential candidate Donald Trump, discussion in a team’s locker room means something else. For him, it’s an explanation for his 2005 comments about women that resurfaced on Oct. 7.

“You know, I’m automatically attracted to beautiful — I just start kissing them,” Trump said in the video featuring him and former anchor Billy Bush. “It’s like a magnet. Just kiss. I don’t even wait. And when you’re a star, they let you do it. You can do anything. Grab ‘em by the p****. You can do anything.”

During the second Presidential debate on Oct. 9, Trump referred to his 2005 comments as “locker room talk,” which raises the question: what can be defined as locker room talk? Not that — at least according to several former Georgia athletes.

“You would never hear Todd Gurley or Aaron [Murray], like the biggest stars ever, talk like that at all,” said A.J. McDonald, who played special teams and linebacker for Georgia until 2013.

Rennie Curran, who played linebacker at Georgia from 2007-2009, said he “never heard any conversation like that in a locker room.” And while every moment cannot be monitored, Georgia’s coaches expect their athletes to adhere to the team’s policies.

“Never heard any conversation like that in a locker room.”

“I expect our players to behave to the UGA standard — which means character, integrity, all the right things,” Georgia football head coach Kirby Smart said.

Craig Sager Jr., who played football for Georgia from 2008-2009, said the locker room was sometimes a place for “rap battles and dance-offs.” Megan Malasarte, a former Georgia track athlete, said the women’s team also discussed day-to-day topics, such as classes and the upcoming workout.

Former running back Verron Haynes said the locker room was a place where players discussed past games. If there was ever vulgar language, it was calling a player out on his play — not something related to a woman.

“I just think locker room talk is going to be completely opposite of what Donald Trump said,” Sager Jr. said. “It was just pushing each other and being competitive and wanting to be the man all the time.”

Not every locker room is the same, though.

“Have I been in every locker room? No,” Chris Conley,  a former Georgia wide receiver, tweeted. “But the guys I know and respect don’t talk like that. They talk about girls but not like that. Period.”

Have I been in every locker room? No. But the guys I know and respect don't talk like that. They talk about girls but not like that. Period.

Still, conversations about relationships came up in both the men’s and women’s locker rooms. But the discussions were usually a harmless and playful banter between teammates and friends before, as well as after, practices and games.

“Guys and girls are going to go out. They’re going to go to the bars and have a good time,” said Kyle Farmer, who played shortstop at Georgia from 2010-2013. “Walking in the locker room, you hear a lot of stuff like what happened the night before, what was going on.”

Adele Harrison, who finished her Georgia softball career in 2015, said the team would casually discuss which men they found attractive.

In the football locker room, McDonald said vulgar language might be heard “if you had a guy telling a story or something like that,” but it wouldn’t be used to “downgrade a woman.”

“I have not really been confronted with that kind of locker room talk,” Farmer said of the baseball team. “If I did, I would have to draw the line and say, ‘Listen, we shouldn’t be talking about that here.’”

The locker room is an area where trust was built between teammates and where players could feel comfortable talking about anything with one another. It’s why it’s considered such a memorable place for athletes of any type of sport, where some memories stick out better than others.

But at the end of the day, some players feel that some comments should not wind up leaving the locker room.

According to McDonald, who played at Georgia under Mark Richt, the team heard from at least four guest speakers a year on the importance of respecting women. He said he thought Richt hired assistant coaches who shared similar values.

On occasion, McDonald saw interactions between his linebackers coach, Kirk Olivadotti, and his wife and children. That example of respect trickled down to the players, McDonald said.

“Georgia was very careful of teaching us what sexual harassment was, what sexual assault was,” Sager Jr. said. “We were all well informed.”

Although the locker room is a place where expletives are said and conversations are held about women, these athletes believe Trump’s comments are mis-representative of themselves and the behavior inside locker rooms.

“I think it does a disservice to athletes in general,” Sager Jr. said.

“As an athlete, I’m pretty frustrated that they associate that with locker rooms,” Curran said.

On Oct. 9, Donald Trump and Hillary Clinton took part in the second presidential debate, the two facing new scandals that arose over the past two weeks.

Sophomore defensive end Jonathan Ledbetter will be on the field for Georgia for the first time this season against Vanderbilt. However, how much he will play remains to be seen.

Behind Enemy Bylines is a series in which The Red & Black discusses Georgia’s upcoming game with the sports editor of the student newspaper of Georgia’s opponent for that week. This week, assistant sports editor Wilson Alexander talked to Robbie Weinstein of The Vanderbilt Hustler at Vanderbilt.

Assistant sports editors Wilson Alexander and John Durham and senior football writer Alexander T. Makrides discuss Jonathan Ledbetter's effect on Georgia in his first game of the season, Vanderbilt's stout defense and if Jacob Eason can bounce-back against the Commodores.

Nobody picked Vanderbilt to win the SEC East this season. But the Commodores were thought to be a team that could win eight or nine games and potentially pull an upset or two.

I am still learning from you, but I am trying to achieve my goals. I certainly enjoy reading all that is posted on your blog. Keeps the information coming. Thank you for sharing this.To Your Success! Please visit my new article in
Vivagoal Situs Berita Bola Terkini
Discoffeery, Kopi Hijau 100% Asli
Cipto junaedy

Really great post. I just unearthed your web journal and needed to say that I have truly delighted in perusing your blog entries. Any way I'll be subscribing to your food and I trust you post again soon. Huge a debt of gratitude is in order for the helpful information. His Secret Obsession Review

I truly welcome the sort of points you post here. A debt of gratitude is in order for sharing us an awesome data that is really useful. Great day! relationship help

SEO link building [wink] This article is an engaging abundance of instructive information that is fascinating and elegantly composed.LOW OBL blog comments [beam] much obliged to you for an incredible post. blog comments backlinks [tongue]