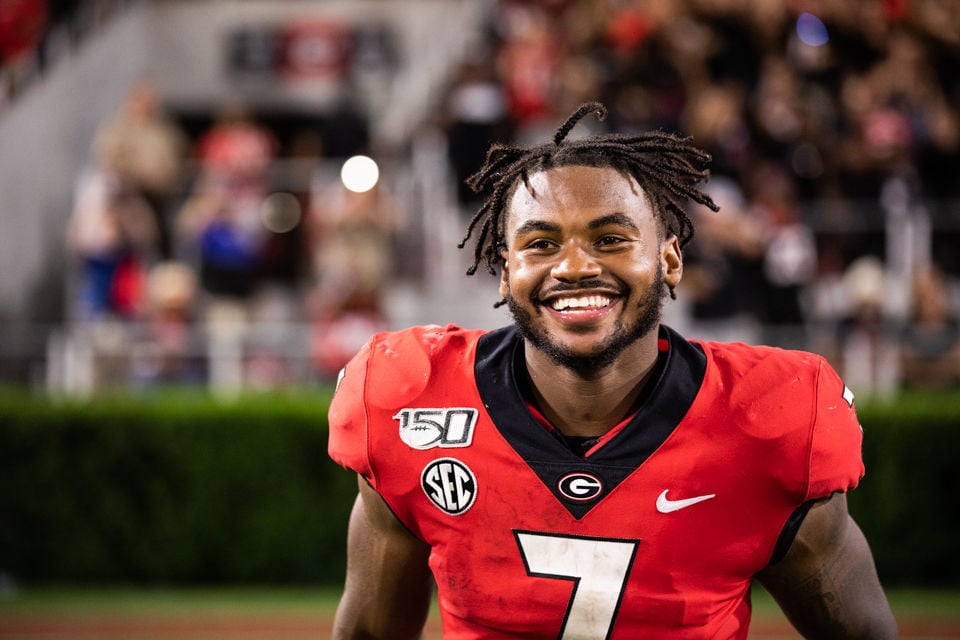 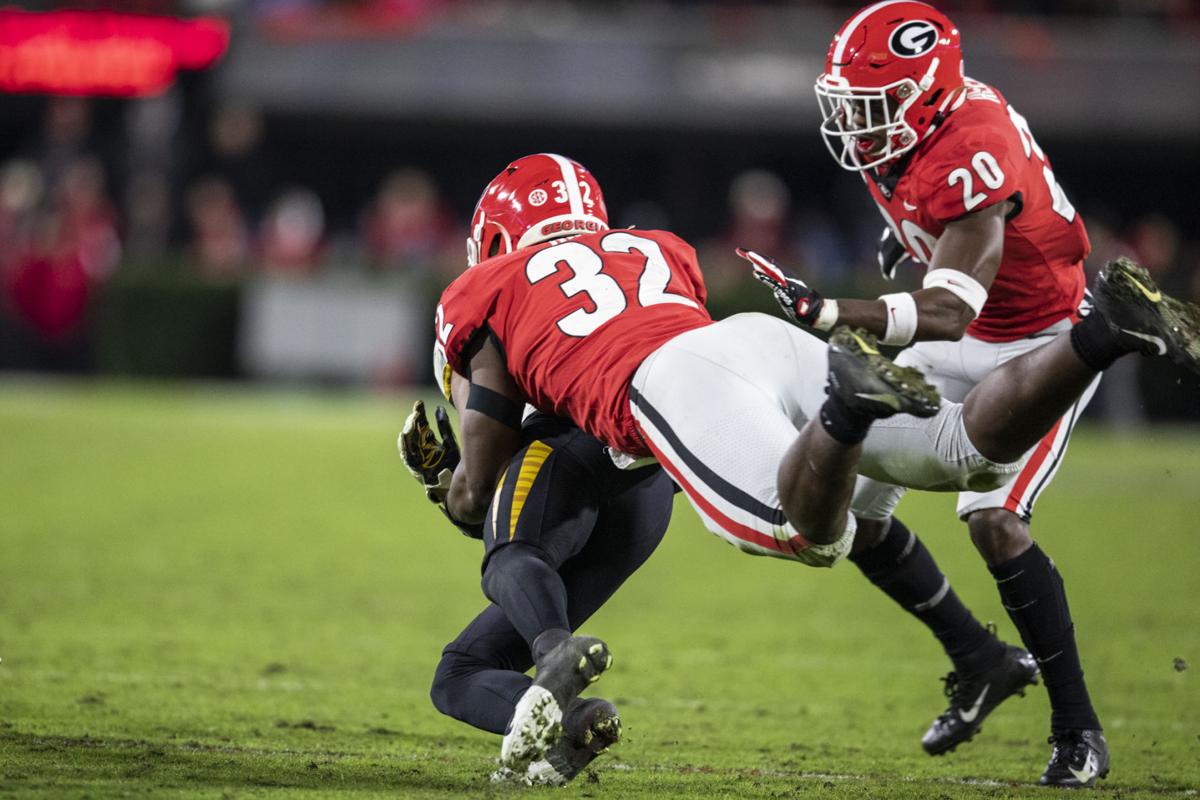 Georgia inside linebacker Monty Rice (32) dives to make a tackle. The University of Georgia Bulldogs beat Missouri by a score of 27-0 on Nov. 9, 2019, in Athens, Georgia. (Photo/Ryan Cameron, rcameron@randb.com) 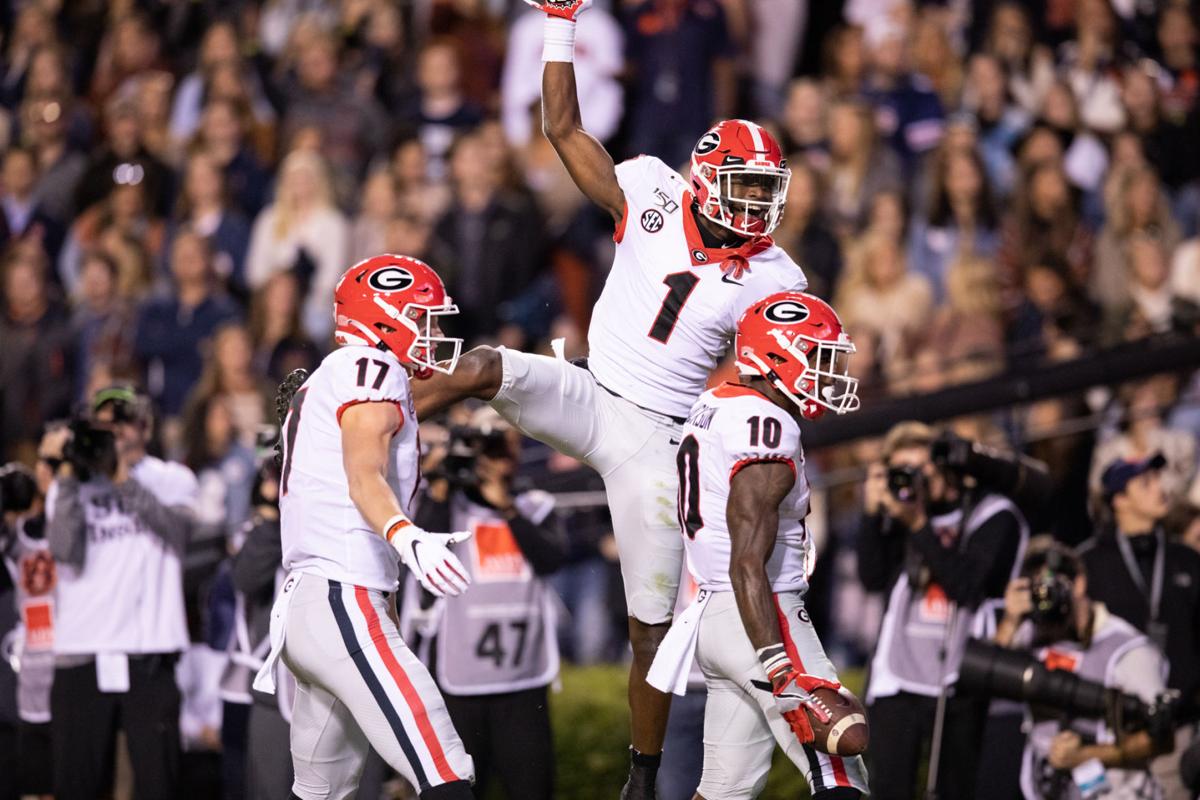 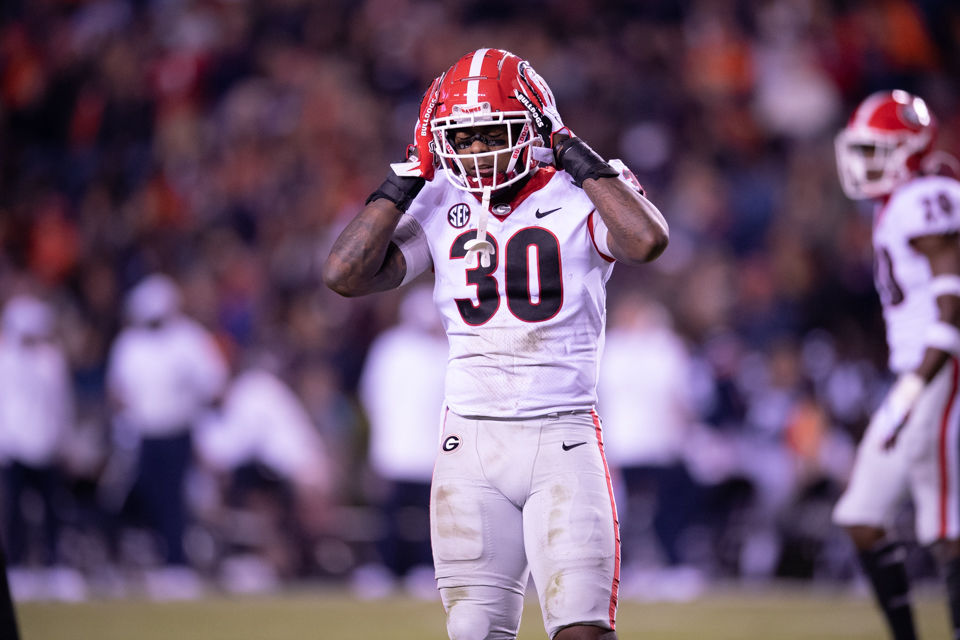 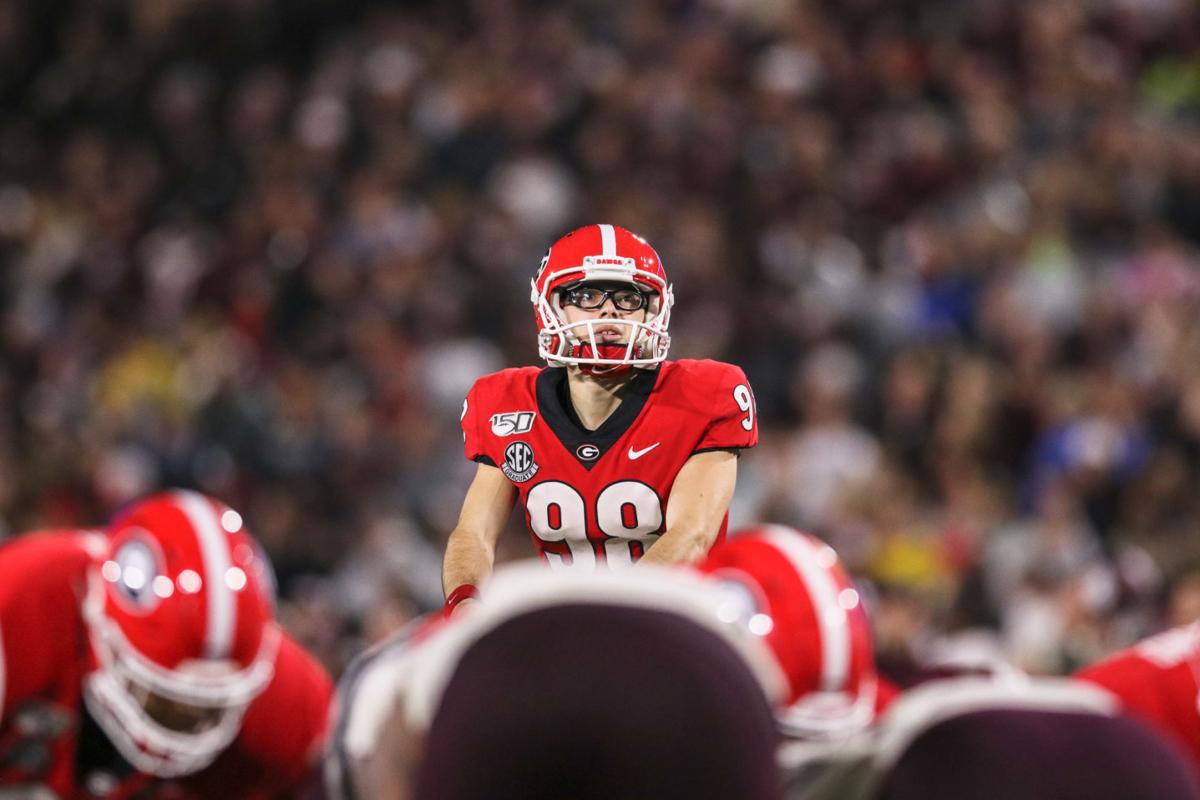 Georgia place kicker Rodrigo Blankenship (98) sets up for a field goal attempt. The No. 4 University of Georgia Bulldogs hosted Texas A&M to the win by a score of 19-13 for their final home game of the season on Nov. 23, 2019, in Athens, Georgia. (Photo/ Gabriella Audi, https://gabbyaudi10.wixsite.com/mysite-1) 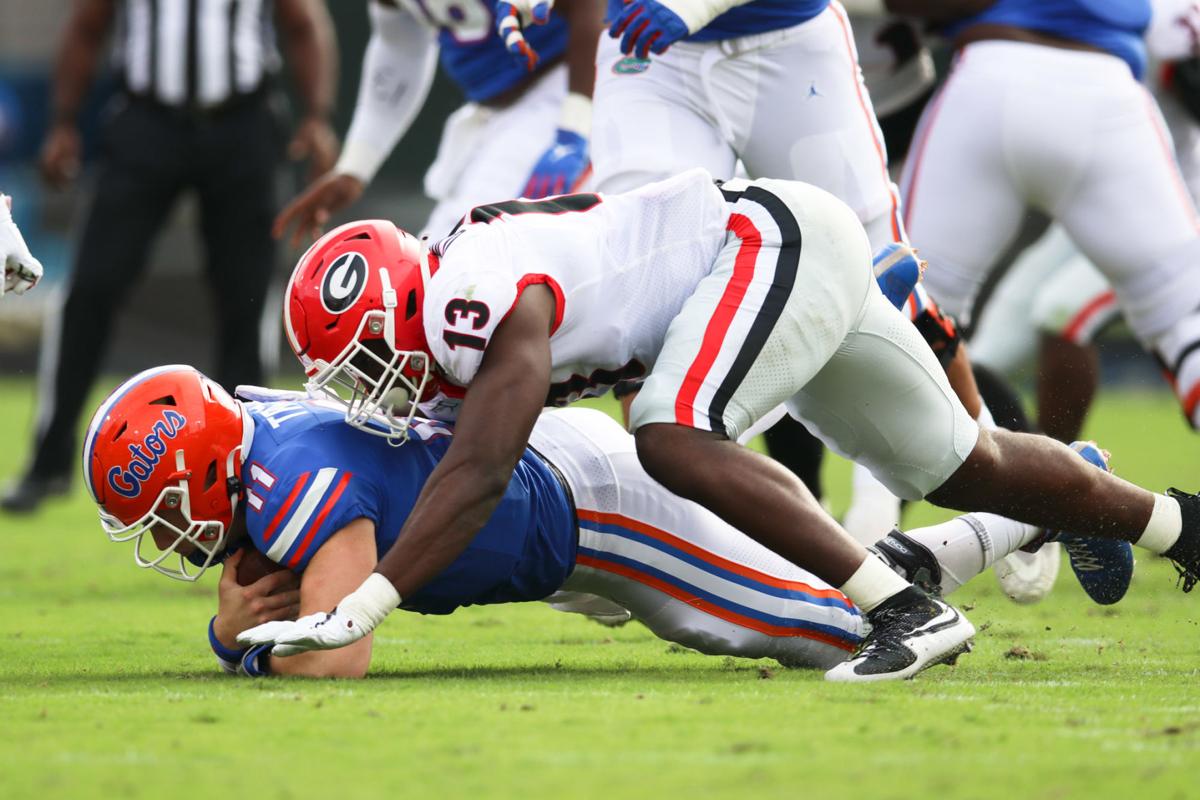 Georgia outside linebacker Azeez Ojulari (13) tackles Florida quarterback Kyle Trask (11). The Georgia Bulldogs ended the first half against the Florida Gators with a score of 13-3 on Saturday, Nov. 2, 2019, in Jacksonville, Florida. (Photo/Gabriella Audi, https://gabbyaudi10.wixsite.com/mysite-1)

Ahead of the SEC championship game on Saturday between Georgia and LSU, The Red & Black picked the top players of the regular season.

D’Andre Swift is the swagger Georgia’s offense needed. He took over games when he had to — highlighted by a 179-yard performance against Kentucky. Swift averaged 100.2 rushing yards per game in the regular season, good for No. 5 in the SEC. He led Georgia’s ground attack, piling up 1,230 yards and seven rushing touchdowns in the regular season. He’s one of five Bulldogs all-time to have two 1,000-yard rushing seasons and averaged over 6 yards per carry this year. Through all of it, there’s no doubt the junior from Philadelphia left his mark in Athens. — Myan Patel

Becoming the face of Georgia’s defense is no small feat. But if there’s one player who deserves it, it’s junior inside linebacker Monty Rice. He led Georgia with 71 total tackles in the regular season and finished No. 15 in the SEC with 6.6 tackles per game. The Huntsville, Alabama, native was one of six Georgia defensive players who started all 12 regular season games and won SEC Defensive Player of the Week for his performance against Auburn. Last year, Rice started in just five games due to injury but still ranked third on the team with 59 tackles. — Henry Queen

George Pickens created a buzz before he even played in his first game at Georgia when a video of his impressive one-handed grab during a preseason scrimmage gained traction online. From that point on, it seemed like a breakout season was in the cards for the freshman from Hoover, Alabama, and he delivered. Earning playing time in all 12 games and a start against Kentucky, Pickens finished the regular season as Georgia’s top receiver with 33 catches for 498 yards and six touchdowns. — Augusta Stone

Tae Crowder received starting reps in 2018 but has truly transformed into a mainstay on the Georgia defense in his senior year. He’s the second-leading tackler with 55 in the regular season, and his crucial role in the middle of the defense earned him a spot as one of the 12 semifinalists for the Butkus Award, which is given to the nation’s top linebacker. The 3-star recruit from Hamilton, Georgia, came in as a running back but made the switch to linebacker in the middle of the 2016-17 season. Now, he’s reaping the rewards. — Andy Walsh

Everyone’s favorite Georgia football player is made clear before kickoff when players’ faces are shown on the video board. Rodrigo Blankenship, sometimes referred to as “Hot Rod,” takes the cake — and the cheers —by far. The senior from Marietta, Georgia, has stolen the hearts of the Georgia faithful throughout his five years on the roster and has also become the Bulldogs’ all-time leading scorer in the process. Blankenship made 24 of 28 field goals in the regular season with a long of 50 yards. — Anna Glenn Grove

Freshman of the Year: Azeez Ojulari

Using the term “freshman” loosely, redshirt freshman Azeez Ojulari has been Georgia’s best pass rusher in his first year as a starter. Ojulari’s 4.5 sacks is the most on the team, and he’s also the team leader in quarterback hits with 33. Georgia hasn’t been an especially strong pass-rushing team this season, but Ojulari has taken the lead role in a group of young edge rushers that will be back again next year. — Nathan Moore

The winding road of Georgia’s regular season helped motivate it to finish strong enough for a meeting in the SEC championship game with LSU on Dec. 7.

PODCAST: Previewing the SEC championship game between Georgia and LSU

Readers voted on their picks of what to Eat, Drink and Do on campus and in the Classic City

We made a call to our readers to find out which Athens staples were their top choices, and then we picked a few favorites of our own. From the…