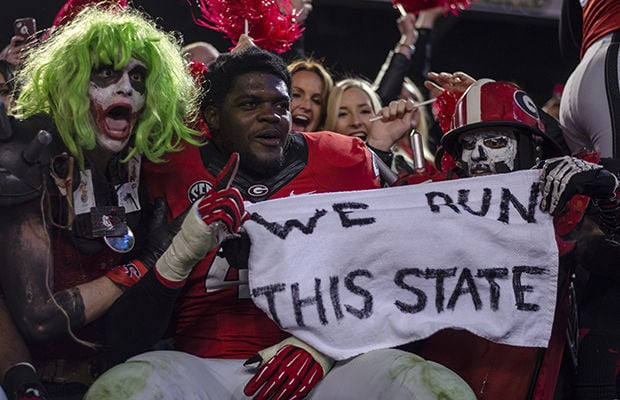 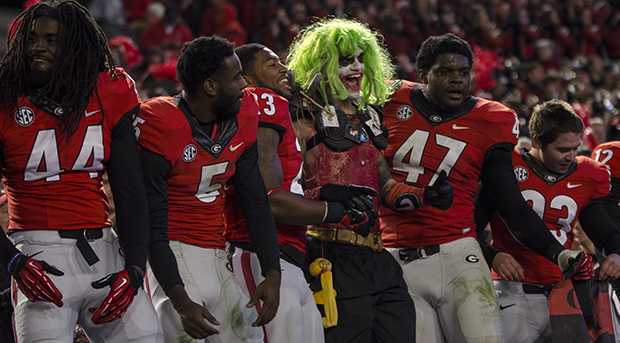 His dedication and work off the field were rewarded today.

The man dressed as The Joker always hanging off the barrier at Georgia football games is Pierce Wallace.

ESPN named him and two other fans members of the 2013 Fan Hall of Fame today, according to an ESPN release.

Wallace is a freshman at the University of Georgia, but his efforts as a fan have made him known among students and fans as he is constantly featured on televised broadcasts of Georgia games.

The Georgia Joker and the three other winners will have their names engraved in chairs at ESPN's campus in Bristol, Conn.

The University of Georgia will distribute degrees to 42 student-athletes at Fall Commencement on Friday, Dec. 13 at 9:30 a.m., in Stegeman Coliseum.

Aaron Murray was named the Southeastern Conference Scholar-Athlete of the Year, according to an announcement Wednesday by the league office.

EmbarkUGA earns high marks for enthusiasm, but some behind-the-scenes legwork will be required to make good on its promises as the Student Government Association executive branch moves into its second semester.

Georgia football held its second practice to prepare for the Taxslayer.com Gator Bowl on Monday.

University of Georgia safety Shaquille Fluker has confirmed that he intends to transfer from Georgia.

Georgia football practiced in Athens Wednesday in preparation for its New Year's Day Gator Bowl matchup with Nebraska. The Red & Black was on hand for 10 minutes of the practice. Here are some notes and observations: