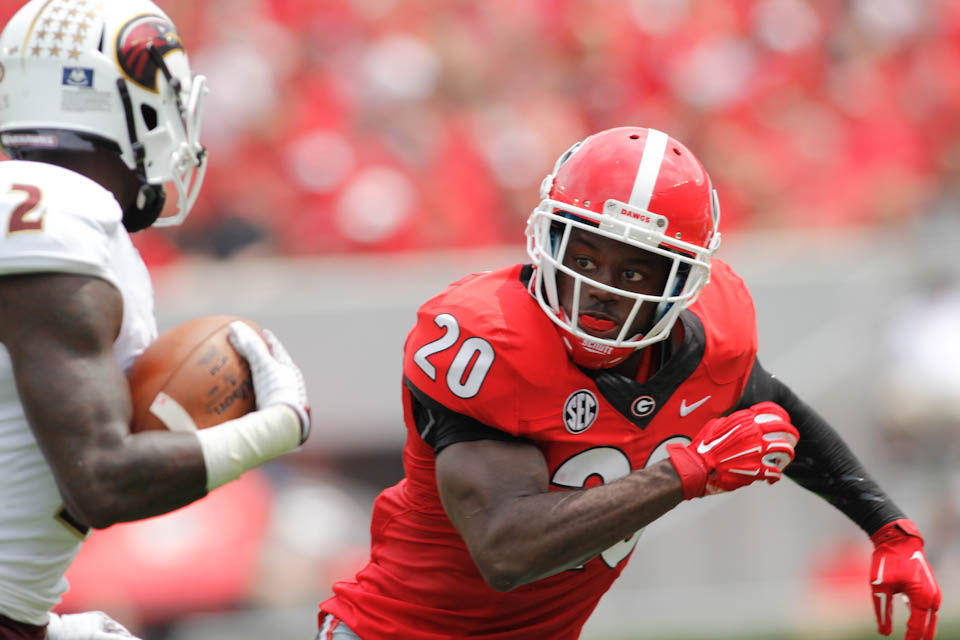 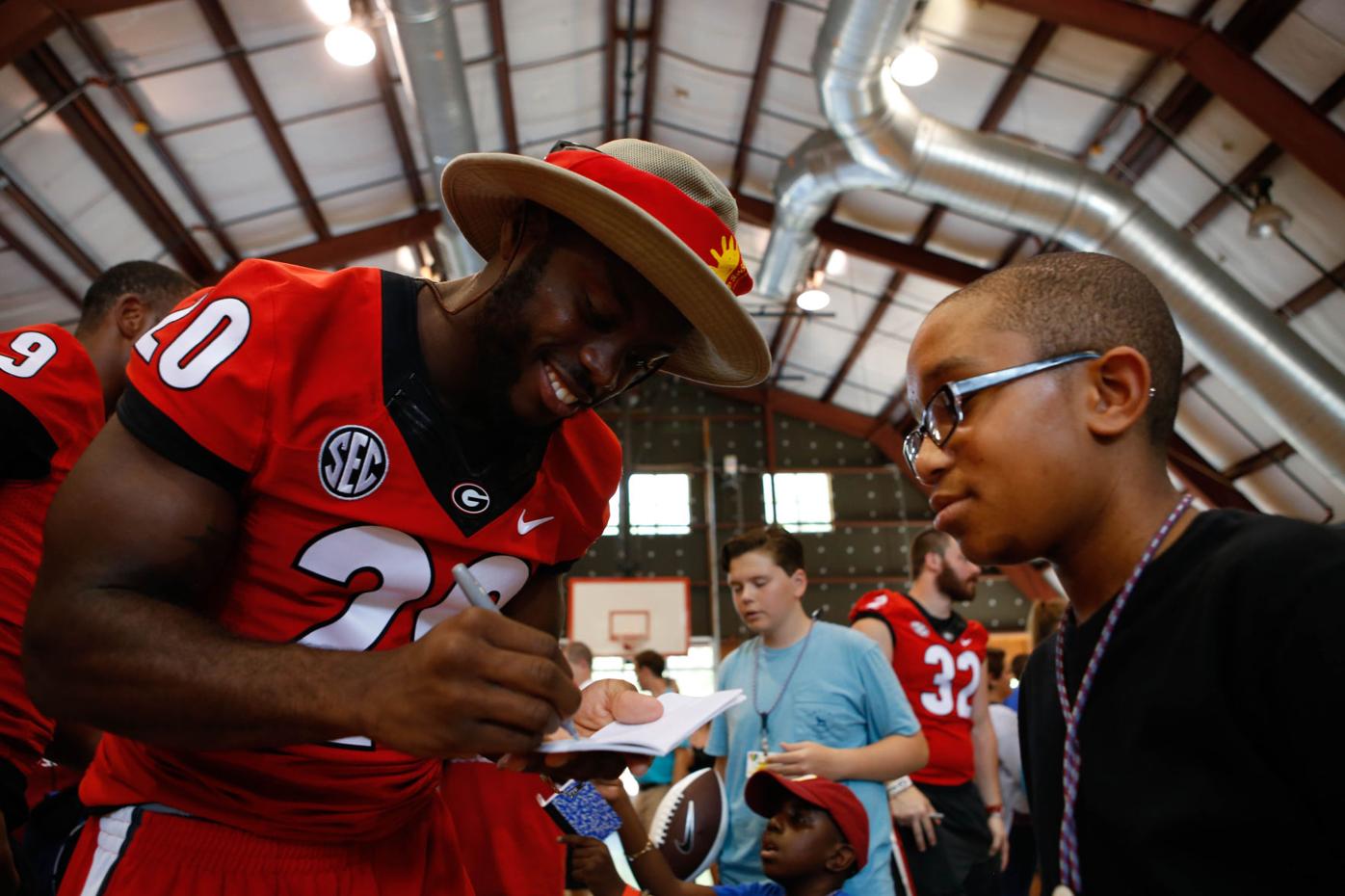 On Thursday, June 23, 2016, a small portion of the UGA Football team headed to Camp Sunshine in Rutledge, Georgia, to hang out and play with the campers. The University of Georgia football team has been attending Camp Sunshine for years, the camp being a place that specializes in caring for children with cancer. Quincy Mauger signs Cruz' notebook. (Photo: Henry Taylor/htaylor@randb.com) 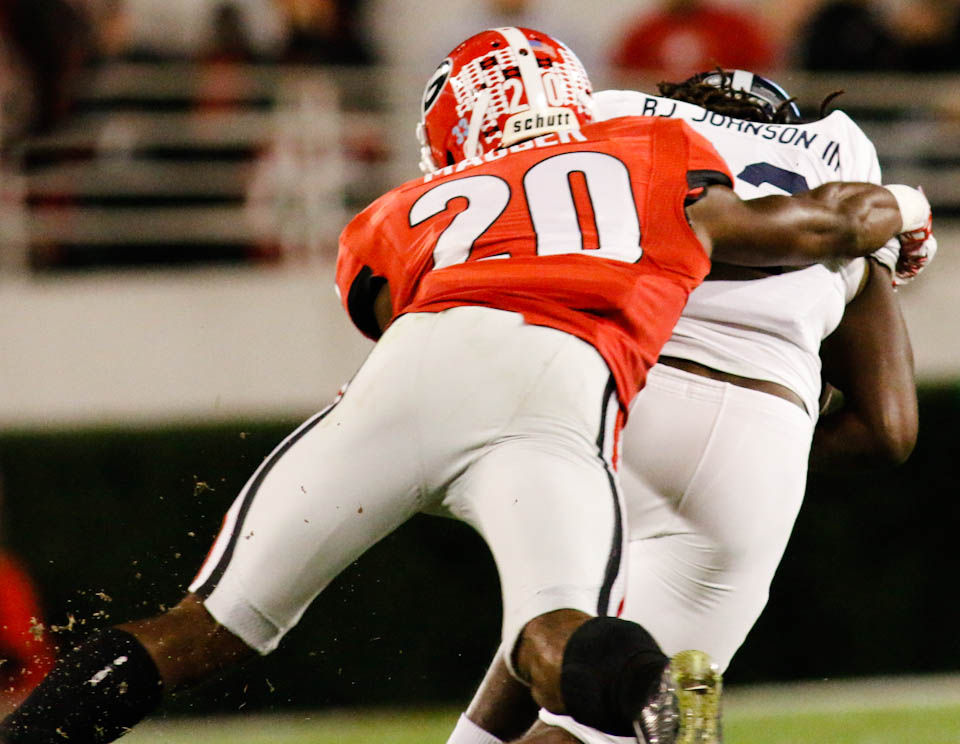 Quincy Mauger was riding a fan bike with a boot covering his left foot during Georgia’s practice Aug. 17.

The senior free safety was pedaling away, trying to get in some sort of workout while his teammates were running drills. But he didn’t sit idly by and gaze at his teammates. Instead, the senior was yelling at them — practically falling off the bike as he tried encouraging the defensive linemen to give more effort in their agility drill.

And his teammates responded to his call.

“He is always motivating other people,” Mauger’s high school coach Derek Cook said. “He is just one of those great kids that you love being around because he is always ready to go to work.”

Cook met Mauger when he became the head coach at Kell High School in 2012. The first thing he noticed about the free safety was the mature and devoted nature of his new player.

That maturity was reflected in the way Mauger went about his preparation. Cook said all Mauger ever wanted to do was to know what he could improve upon and would spend countless hours studying film. This gave the 6-foot, 206-pound safety the confidence to not only know all his assignments but make sure his teammates knew theirs as well.

“Quincy had great credibility because of the way he conducted his own business and was able to gain the respect of his other teammates,” Cook said. “When he said something to them, they would listen and try to do what he asked.”

His college teammates listen to him even more.

“He is always yelling at us to do better,” linebacker Davin Bellamy said. “Usually it wants to make me do better.”

Georgia head coach Kirby Smart remembered making the three-and-a-half hour trek from Tuscaloosa, Alabama, to recruit what he hoped would be another crown jewel for the Crimson Tide defensive secondary.

His plan to coach Mauger was foiled when Mauger decided to take his talents to Georgia. However, three years later, the two have reconvened and Mauger’s charisma and guidance are sure to make him a crown jewel among leaders on this year’s Georgia squad.

“He is the guy that gets us going everyday,” Smart said. “We ride off his energy.”

Along with the tremendous amount of energy and the encouraging attitude he brings to practice every day, many of his teammates point to Mauger as being a humble guy. Cook had no doubts believing Mauger’s teammates would say that about him.

Two years ago during Georgia’s bye week, Mauger went home to Marietta. While there, he went to go see his former coach’s son play in a football game. And the whole time he was trying to watch, he was mobbed with fans who wanted to talk and take photos with the former Kell superstar.

“He talked to every single person and took every single photo,” Cook said. “He didn’t have to do that. He took the time out off his few minutes off to come be with us. He is just a pleasurable person to be around.”

The evolution of Kirby Smart: How a boy from Bainbridge became the head coach at UGA

In the southwest corner of Georgia, Bainbridge rises out of miles of farmland. When a Walmart and McDonald’s appear alongside the road, it’s an unusual sight. Instead of skyscrapers, there are oak trees blanketed with Spanish moss.

The battle for starting quarterback has been the hot topic surrounding the Georgia football team this offseason.

With just 10 days left until Georgia football’s first game against the University of North Carolina, head coach Kirby Smart is still getting a feel for his team.

Georgia is in the midst of preparing for its game against North Carolina on Saturday, and while watching the Tar Heels’ game film, Georgia’s defense noticed something in particular: speed.

Nick Chubb cleared to play, Smart comments on status of other running backs

After a gruesome knee injury in October, a limited spring and months of sporting a black, non-contact jersey at practice, junior Nick Chubb has been cleared to play in Georgia’s season opener against North Carolina.

Lambert and Eason have officially been narrowed down to the top-two quarterbacks with five days left until the first game, according to head coach Kirby Smart. They’re receiving the first-team repetitions in practice, and one of them will be the starter on Sept. 3. However, no starter has been publicly named yet.