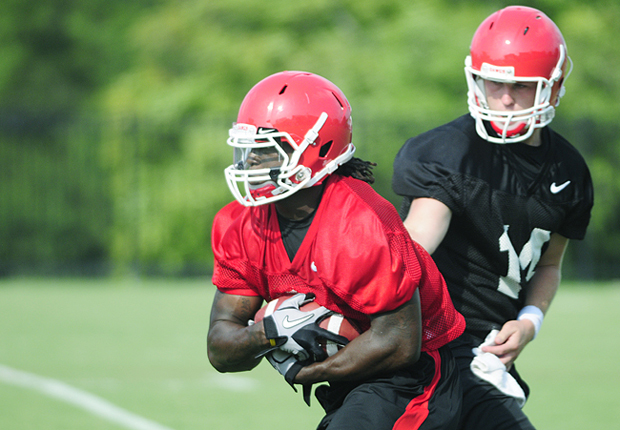 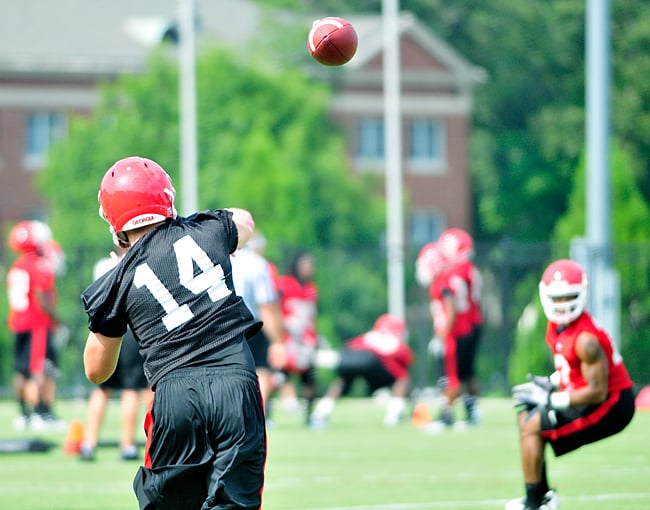 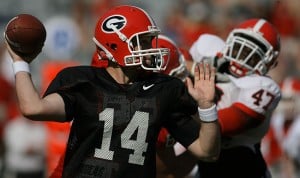 Hutson Mason might be just as happy as quarterback Aaron Murray that Georgia's starting signal-caller was honored at the Peach of an Athlete Role Model Banquet on Tuesday.

Murray’s absence from the team’s first scrimmage of the spring allowed the redshirt junior to get a crack at first-team reps for the first time in his career as a Bulldog.

“I’m going to see if he can sign up for some more banquets and pass the reps around,” Mason said.

According to Georgia head coach Mark Richt’s “unofficial official” stats, Mason went 14-of-23 for 186 yards with one touchdown and two interceptions. Mason was battling not only the first-team defense, but cold temperatures and high-speed winds that contributed to the six total interceptions that all quarterbacks threw.

“Once your body gets warmed up and your blood starts flowing, you don’t really recognize it that much,” Mason said. “There were some balls that I let go, and the wind just took. It’s one of those things you can’t control, just Mother Nature.”

Regardless of the elements, he was happy with the play of the offense.

Offensive coordinator Mike Bobo told the 6-foot-3, 206-pound Marietta native that he would be playing with the first team during Monday’s quarterback meeting.

He said he was nervous early on since he hasn’t set up behind center at Sanford Stadium in a long time.

“It feels like honestly I haven’t played football in so long coming off the redshirt year,” Mason said. “I had the jitters a little bit cause I’m not used to going with the one’s. Getting out there with them, you’ve kind of got to know how guys like Malcolm Mitchell — who I don’t get to throw to a lot — Artie Lynch, have different timing on different routes. I thought for me and those guys that don’t really get a lot of reps together, I thought we did some great things today.”

One of the positive plays was a 45-yard connection with wide receiver Chris Conley for six points.

“It was really a progression on the left side of the field,” Mason said. “I saw nothing open, and then went boom, boom, boom all the way [across]. Chris was really my last progression, and the line protected and did a great job. It was probably one of our longest plays of the day, probably 45 yards on a long bomb. It’s always good to see those end up in the end zone.”

Mason showed his competitive spirit when he got into a scuffle with inside linebacker Amarlo Herrera during one of the third-and-long drills.

Outside linebacker Jordan Jenkins provided a strong synopsis of the event.

“There was a little scuffle between them. [Mason’s] got the black jersey on, so we’re not going to hit him,” Jenkins said. “Later I guess Amarlo tapped Hutson on the helmet to tag him down, and Amarlo said Hutson swung. Amarlo’s a hot head, and Amarlo don’t like that. Amarlo started swinging back, and the whole o-line — all six of them came and sqaudded up on Amarlo. His helmet came off, the defense came up, it was short little scuffle. It was fun.”

The incident was nothing serious, but Jenkins liked seeing the fire out of Mason.

“Hutson’s pretty good. He doesn’t back down for nothing,” he said. “He’s tried to come at us a couple times, and we tried to let him know he’s got a black jersey for a reason. Don’t let us put you in a red jersey.”

For stepping up on only a day’s notice, Georgia’s head coach was pleased with his backup quarterback’s play.

“He’s going into his fourth year in the system, so he’s very capable of running the show,” Richt said. “I thought he did a good job.”

Since it's Mason’s fourth go-around, he’s gotten to play against NFL-caliber talent during his time in Athens so far. It’s something he believes will only work in his favor as he continues to develop, and could pay dividends when he gets first-team reps on Saturdays.

“I’ve always said I really think that — since I’ve been here — when I was a freshman, and even as a sophomore, I was always going against guys older than me who were stronger and faster,” he said. “I really think throughout the rest of my career that’s going to help me.”

Conley thought Tuesday’s scrimmage was good opportunity for Mason to gain not only some self-confidence, but for the rest of the offensive to gain confidence in him.

“It was good for Hutson to be out there with us,” Conley said. “Hutson is a very talented guy, and he’s had to wait. He’s done a great job at it, he’s been extremely patient and his ability — we know that he’s capable of playing in this offense. Giving him that opportunity to do that today gave him a lot of confidence, and also gave us a lot of confidence in him.”

Editor's note: Staff writer Connor Smolensky is going to give a daily breakdown of each position group leading up to Georgia G-Day spring game on April 6.