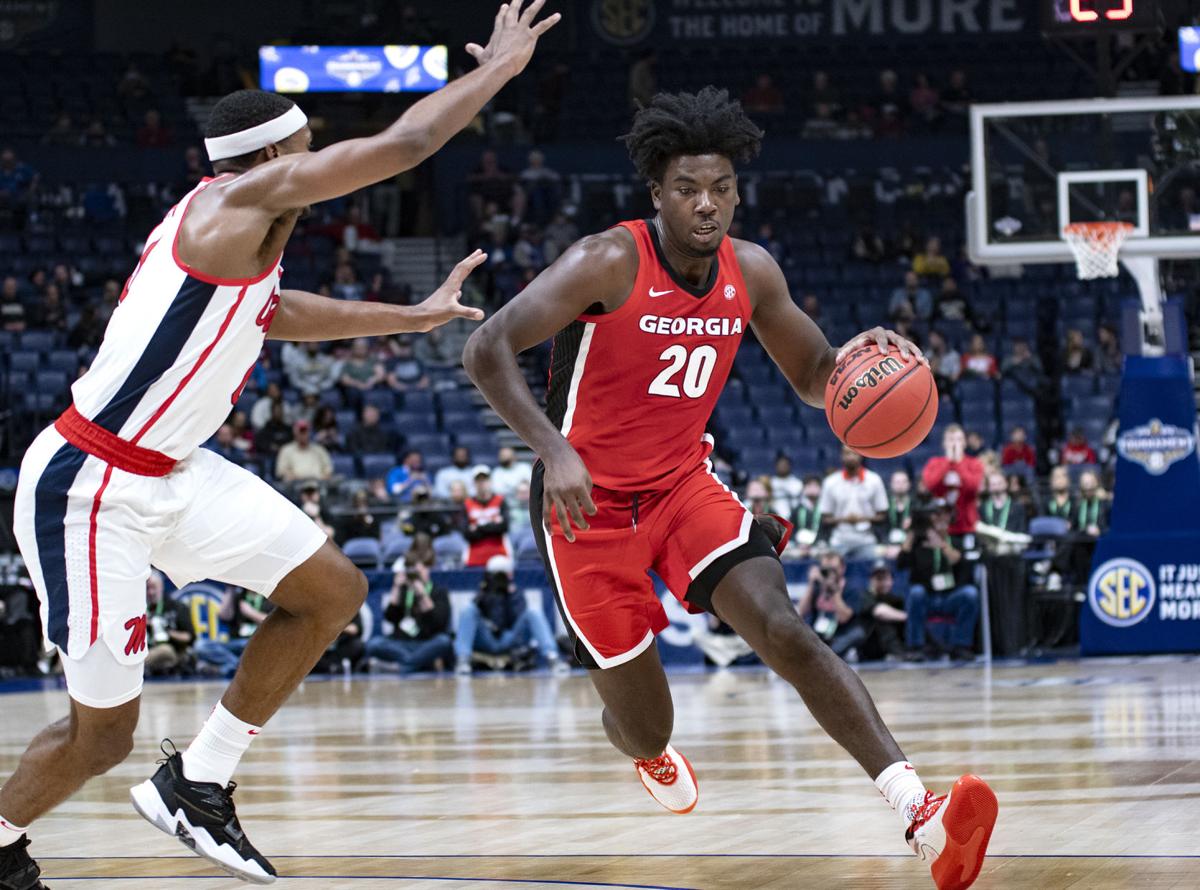 Georgia’s Rayshaun Hammonds sprints down the court with the ball. The University of Georgia played Ole Miss in game one of the SEC Tournament, winning by a score of 81-63 on March 11, 2020, in Nashville, Tenn. (Photo/ Kathryn Skeean, kskeean@randb.com) 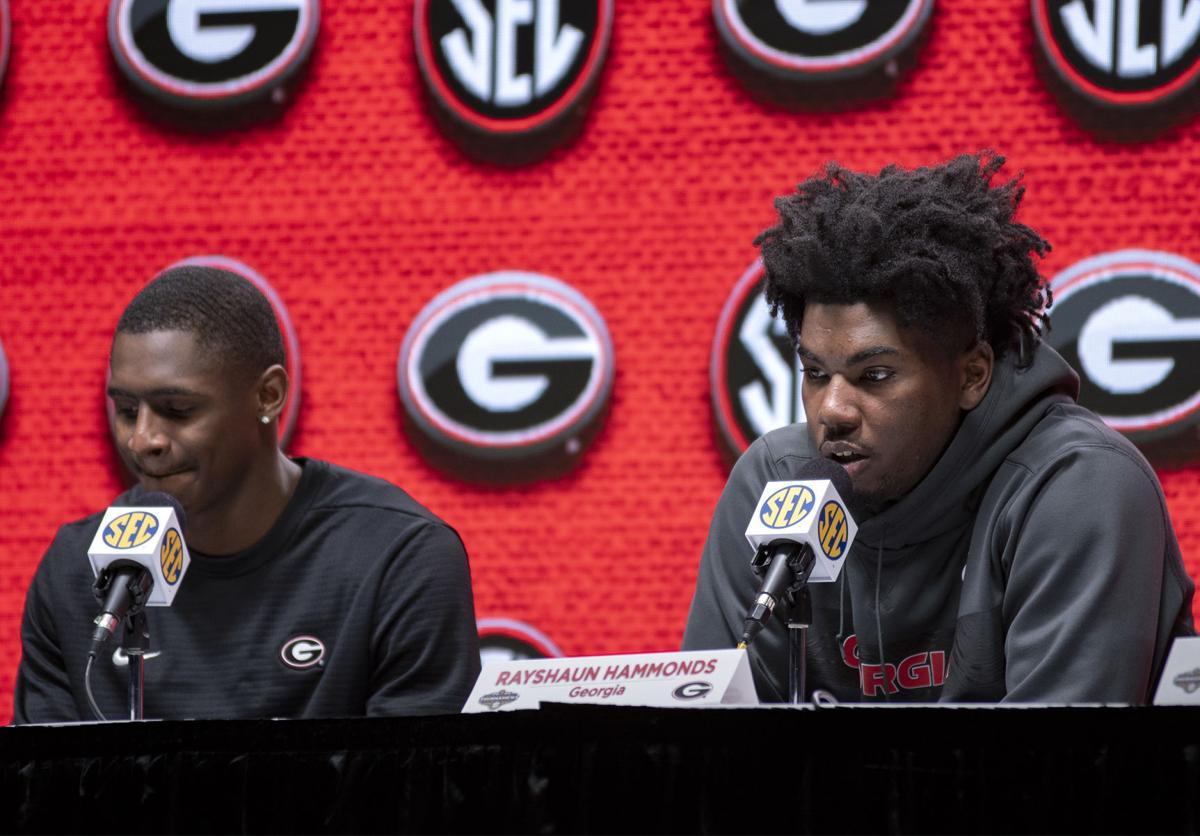 Georgia’s Jordan Harris (left) and Rayshaun Hammonds (right) speak on the team’s success in the game. The University of Georgia played Ole Miss in game one of the SEC Tournament, winning by a score of 81-63 on March 11, 2020, in Nashville, Tenn. (Photo/ Kathryn Skeean, kskeean@randb.com)

Head coach Tom Crean doubted Crump would be available during the Bulldogs’ SEC tournament run due to infectious mononucleosis, so a regroup was needed. Georgia would be playing with a shorter bench and would need contributions from across the board. With no Crump, the Bulldogs’ outside threat dwindled down even further.

Two of the remaining three upperclassmen — Jordan Harris and Rayshaun Hammonds — stepped up in Crump’s stead. The duo combined for 43 points in Georgia’s 81-63 win over Ole Miss.

Harris finished with 21 points, seven rebounds, shot 8-for-11 from the field and hit three 3-pointers. Wednesday wasn’t the first time Harris has shown his capabilities in the SEC tournament. Last season, he finished with 26 points in Georgia’s 71-61 loss to Missouri in the first round.

Harris knew what to expect and deferred the praise to his teammates and coaches who put him in the position to be successful.

“I just went out there and gave it everything I got,” Harris said. “Everything was just falling into place. I feel like I needed to pull out this [performance] for us to win.”

Hammonds logged his sixth double-double of the season as he finished with 22 points, 12 rebounds and four assists. He hit two 3-pointers and brought constant energy on both sides of the court, coming up with loose balls and second-chance points.

Hammonds also pointed to his teammates as the reasoning for his game-changing performance.

One of those teammates was Anthony Edwards, who added another inefficient shooting game under his belt. The star freshman finished with six points and shot 2-for-13 from the field. He still played all 40 minutes, despite Crean questioning if he should give him a break or not.

“We need to win the game, right? The timeouts are there, I’m watching him,” Crean said. “There were probably five or six times I thought about taking him out, then I overruled myself.”

Crean’s decisions were warranted. Edwards made his impact in other areas, first by undertaking the toughest defensive assignment for the Bulldogs — guarding Ole Miss’ Breein Tyree.

In Georgia’s 70-60 loss to the Rebels on Jan. 25, Tyree scored 20 points and helped halt the Bulldogs’ comeback attempt. On Wednesday, Tyree scored 18 points but shot 8-for-18 from the field as Edwards did a solid job covering him on every possession.

Even when Crean drew up plays for Edwards, the freshman said he didn’t want to force it. He knew his shot wasn’t going in and he thought Georgia would be better off giving the opportunities to the likes of Hammonds and Harris.

The SEC's announcement came moments after Georgia defeated Ole Miss 81-63 in the first round of the SEC men’s basketball tournament.

COVID-19 concerns close all SEC, Georgia sports events to the public from March 12-30

Due to increased concerns over the spread of COVID-19, the SEC announced on Wednesday that conference sports events — including all Georgia sports events — will be closed to the public from Thursday, March 12 through March 30.

Georgia men’s basketball forward Rayshaun Hammonds announced on Friday he would be entering the 2020 NBA draft while still maintaining his eligibility. The decision allows him to hear feedback from NBA teams while still leaving the door open to return for his senior year.