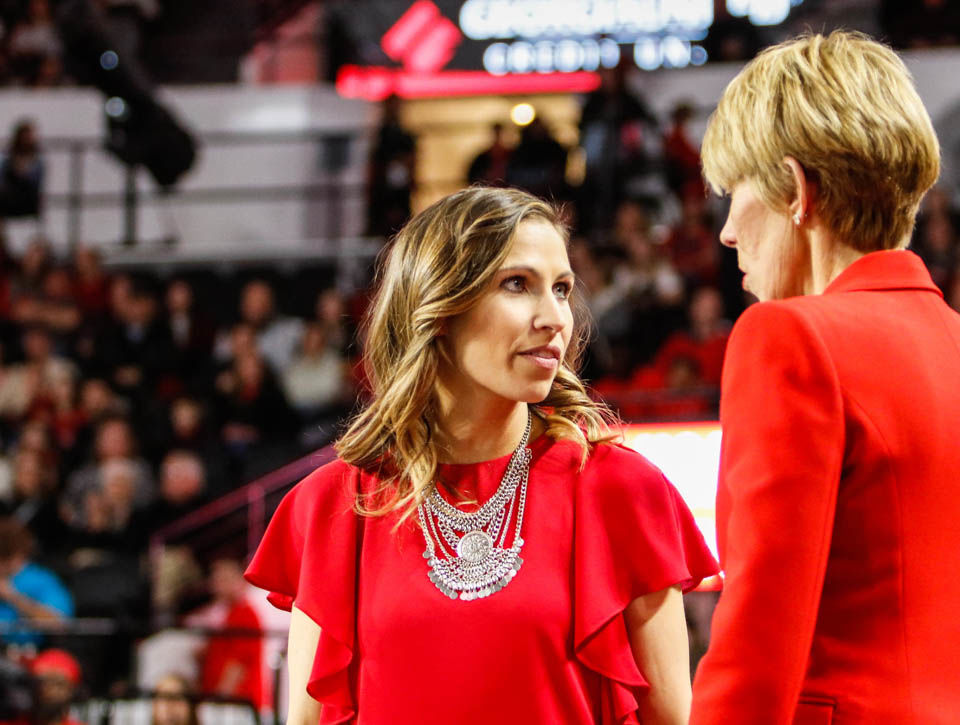 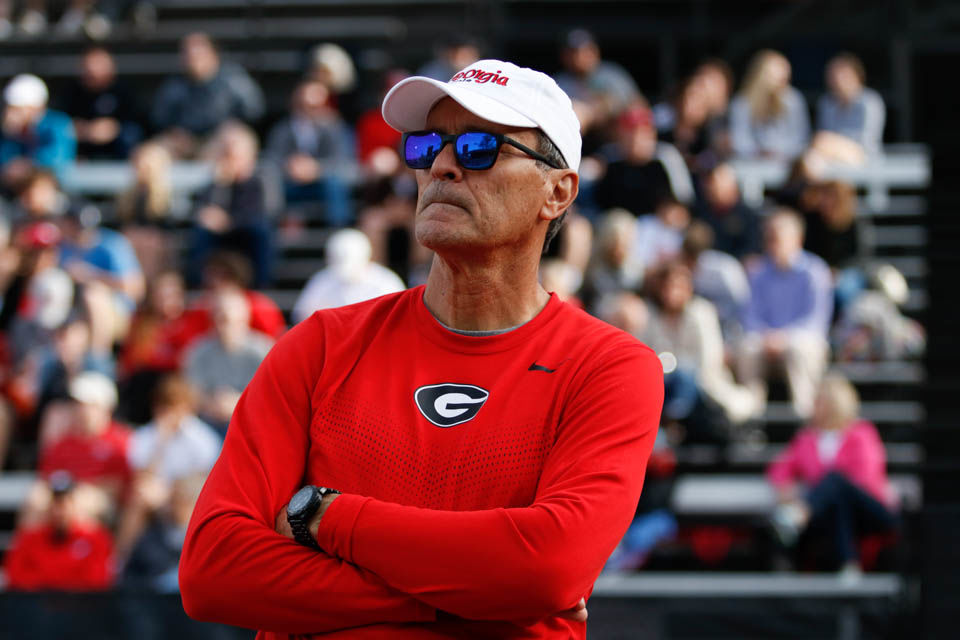 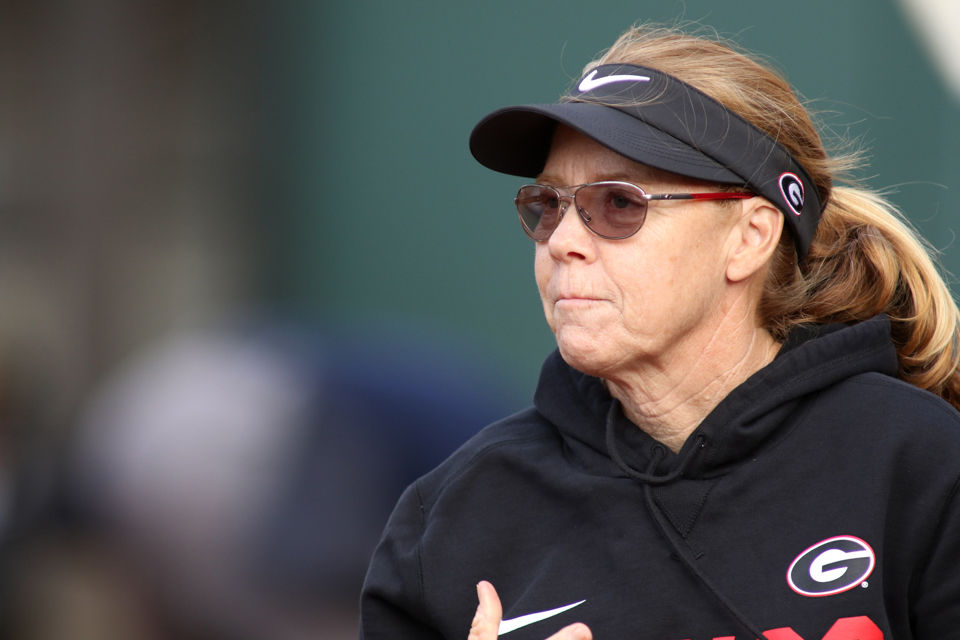 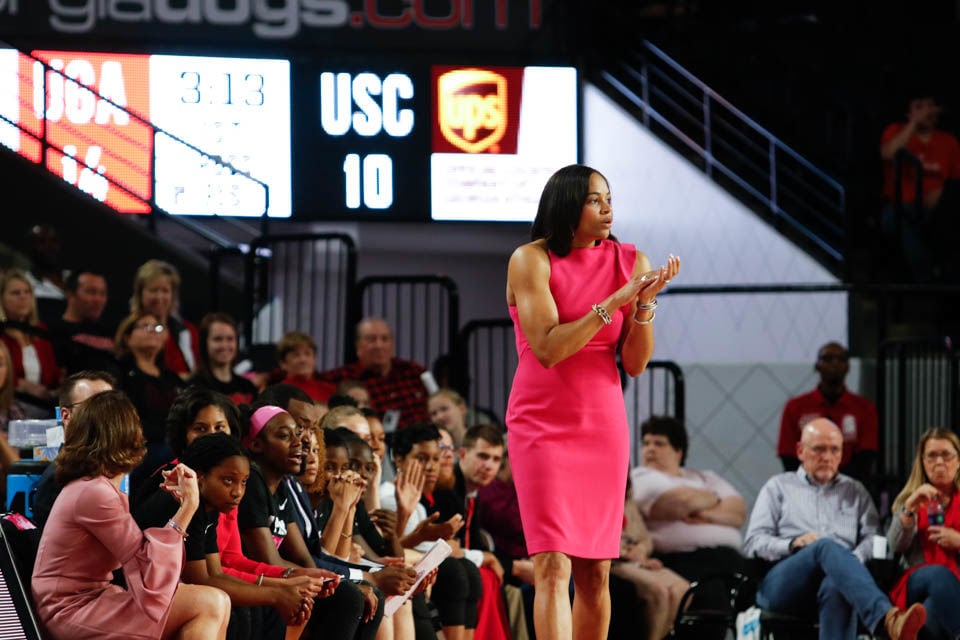 University of Georgia women's basketball head coach Joni Taylor directs her team from the sidelines in a game against the University of South Carolina at Stegeman Coliseum in Athens, Georgia on Thursday, Feb. 15, 2018. The Lady Gamecocks defeated the Lady Bulldogs 77-65. The home team wore pink uniforms in honor of the nationwide Play for Kay movement. (Photo/Vira Halim, www.virahalim.wordpress.com) 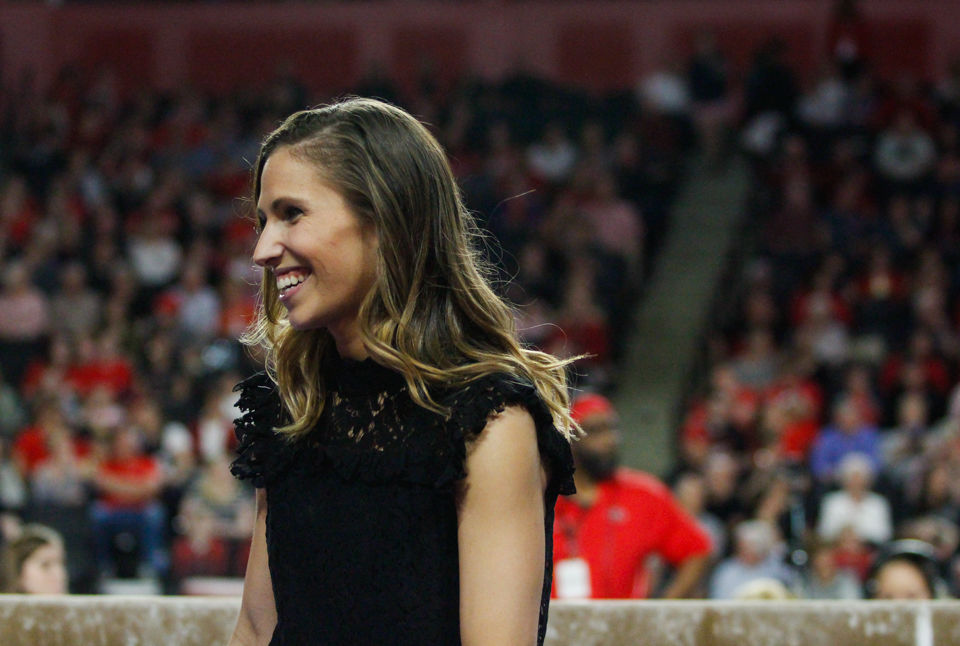 Nov. 16 marked the beginning of the regular signing period for NCAA sports outside of football and basketball. Here is a look at where the 2019 classes for Georgia sports stand as of Nov. 19.

Check back for more updates on Georgia recruiting at https://www.redandblack.com/sports/recruiting/.

On national signing day, four new volleyball players were added to the Bulldogs roster on Monday. With five graduating seniors, this will create a young team for the Bulldogs.

During the national signing period, 11 riders signed national letters of intent to further their equestrian careers at Georgia. McKenzie Aebi will be coming to Georgia from Dhahian, Saudi Arabia.

Georgia gymnastics announced the addition of Amanda Cashman to the 2019 signing class Thursday. Cashman comes to Georgia from Belle Mead, New Jersey, after placing in the top 10 at the Junior Olympic Nationals in 2015, 2017 and 2018.

Two out-of-state gymnasts found their future home in Georgia this week. Soraya Hawthorne of Memphis, Tenn. and Haley de Jong of Port Coquitlam, British Columbia, Canada have signed to continue their athletic careers with the GymDogs.

Hawthorne has routinely placed in all events of national competitions since 2015 and is currently the 2018 National Vault Champion. The USA Junior Olympics Code of Points even has a skill named after her, called the “Hawthorne.”

The Tennessee native looks forward to honoring her late father’s memory by becoming a Georgia Bulldog next fall. Hawthorne’s father, who passed away of cancer in Dec. 2014, was part of the ‘Bulldogs,’ special ops rescue team.

Across the northern border, de Jong has competed in events with Team Canada since 2016, where she earned Team Gold medals at the 2016 Junior Pan American Championships and the 2016 2020 Hopefuls Cup. She was recently awarded an individual silver medal on vault at the 2018 Canadian National Championships. — Augusta Stone

Head coach Chris Haack announced on Thursday that Cassidy signed a national letter of intent to compete with the Bulldogs.

After signing his national letter of intent, Zink is the first signee for head coach Manuel Diaz in this year’s signing period. The Bulldog recruit heads into his senior season ranked as the eighth-best prospect nationally, according to TennisRecruiting.net.

He will be an eligible freshman by the beginning of the 2019-2020 season. — Quentin VanHoozer

The Georgia soccer team signed eight new players from the high school class of 2019. Chloe Chapman of Mitchelleville, Maryland, is the biggest name of the class not necessarily because of her soccer skills but because she also officially committed to play basketball on Wednesday for Georgia.

The Georgia softball team added four new recruits to its 2019 roster and three to their 2020 its during the recent signing period.

Georgia's 2019 roster gains two transfers in Alley Cutting and Hannah Coulter. Cutting is a right-handed pitcher from Grand Island, New York, and will be joining the Bulldogs after two years with the Kennesaw State Owls. Coulter comes from Cochran, Georgia, and is transferring from Gordon State College to play catcher.

The team also adds two players to the 2019 roster from Georgia in Jaiden Fields and Laura Bishop, who will be enrolling early to play this upcoming season. Bishop is a right-handed pitcher out of Woodstock, Georgia, and Fields is a first baseman/utility player from Kennesaw, Georgia, whose brother, Justin Fields, plays quarterback for the Bulldogs.

The 2020 roster welcomes three new additions, two of which come from the state of California.

Sydney Kuma, an infielder from Fresno, California, and right-handed pitcher Shelby Maier from San Diego, California, have committed to play for Georgia after finishing high school. The team will also be joined in 2020 by Sara Mosley, and infielder from Ellijay, Georgia. — Michael Cercone

Georgia women's basketball landed its first official signee of its 2019 class Thursday, as the team announced five-star point guard Chloe Chapman signed a national letter of intent to play for the Bulldogs starting in 2019.

Georgia also signed five-star recruit Javyn Nicholson, the No. 38 overall prospect for 2019, according to ESPN. The 6-foot-3 forward from Collins Hill High School in Lawrenceville, Georgia, averaged 11.6 points and 9.2 rebounds as a junior and was named to the Georgia Coaches Association All-State Team.

Georgia also added in-state forward Jordan Isaacs from St. Francis High School in Alpharetta. The 6-foot-2 Isaacs is rated as a five-star prospect by Prospects Nation and ranks No. 15 nationally. According to ESPN, she is a three-star prospect and the No. 14 overall forward in the class of 2019. — Marshall White

All five prospects are accomplished at the amateur, and even professional levels. Bae was named the Georgia Class 7A Player of the Year, while Hung made the cut in three professional tournaments. Dao appeared in the U.S. Women’s Open and Canadian Women’s Open, and Don, a Turin native, is currently ranked 56th in the World Amateur Golf Rankings. — J.C. Gonzalez

Mcintosh is the No. 10 running back in the class of 2019, according to the 247Sports Composite, and his commitment comes after a visit to Athens for the Auburn game this past weekend.

The 2020 recruiting class consists of seven pitchers and six position players, with 12 coming from the state of Georgia and one from North Carolina.

The sets were close, as the largest deficit seen by Arkansas at the end of any set was a three-point loss.

After battling through a close game early against Morgan State, Georgia pulled away in the third quarter for a comfortable 60-33 victory on Th…

The Bulldogs finish the season with an overall record of 15-14 and a 6-12 record in SEC play.

After the game, head coach Joni Taylor recognized the moral victory, but was focused more on the lost opportunity.

On Monday afternoon, the Southeastern Conference announced two honors for members of the UGA volleyball team.

Hailing from South Africa, Henning will join the Bulldogs as an eligible freshman in the upcoming spring.

With a team comprised of nine freshmen, two sophomores, two juniors and only one senior, Saturday was an important day for the newest GymDogs to get accustomed to the Stegeman Coliseum environment.

The GymDogs will face seven of the preseason top 10 teams in the 2019 season.

Kupets Carter will have her daughter before Georgia’s first meet against Ohio State on Jan. 5. By then, she’ll have plenty of other things to deal with in her second year as head coach.

Nine of the 14 gymnasts running out of the tunnel in Stegeman Coliseum for the GymDogs’ season opener against Ohio State on Saturday will hear the cheers of a home Georgia crowd for the very first time.

The Georgia softball team has been picked to finish second in the SEC in the 2019 Preseason Coaches’ Poll, the league announced Wednesday.

On Friday, the fifth-ranked Georgia women’s tennis team opened its season in Athens against the South Florida Bulls in the ITA Kickoff Weekend. The Bulldogs clinched a 5-2 win early on, but the scoreboard didn’t indicate how tough of an afternoon it was.

The fifth-ranked Bulldogs took the victory early at 4-0, but chose to play the rest of the games, and finished it out 7-0 over the Wildcats.

After a successful 48-13 season from the Georgia softball team, the Bulldogs look to not only the two seniors Alyssa DiCarlo and Kylie Bass, but the rest of the team to take on larger roles as leaders.

The 2018 iteration of the Georgia softball team, or “Team 22” as it is known to some, was undoubtedly successful.

The eighth-ranked Georgia equestrian team upset No.2 Texas A&M 12-8 in Bishop, Georgia, on Saturday at the UGA Equestrian Complex.

Georgia is in seventh place on the team leaderboard after round one of the Lady Puerto Rico Classic. The Bulldogs posted an 11-over-par 299.

Here is a look at where the 2020 classes for Georgia sports stand as of Nov. 20.