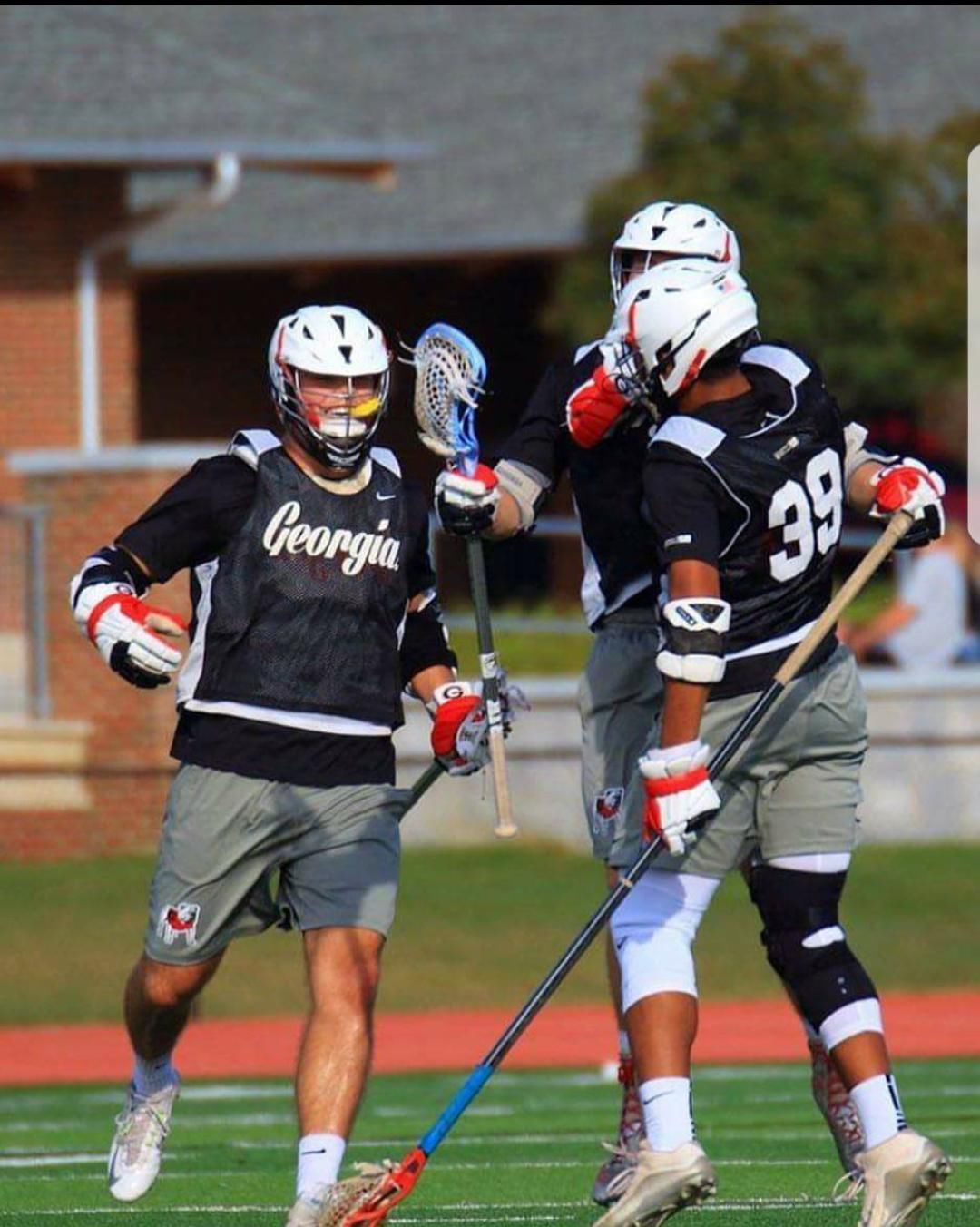 UGA players celebrate goal in a scrimmage at the Wounded Warrior Project: Faceoff for a Cause tournament at Berry College on Oct 21. 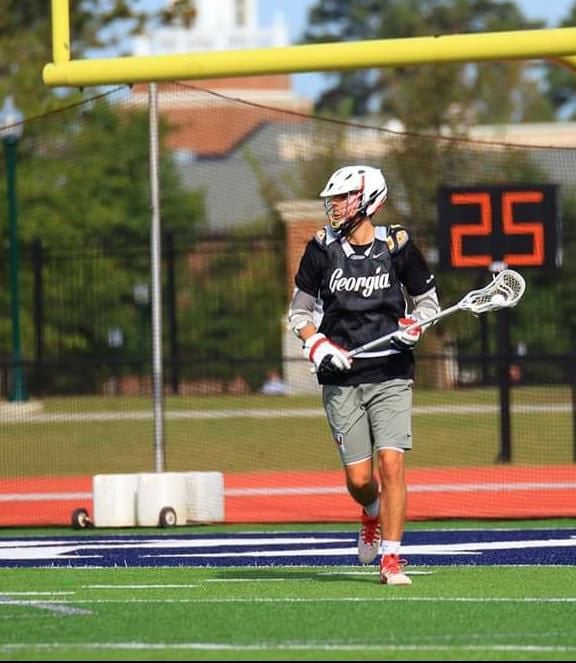 UGA player stands brings ball back into play behind the goal. 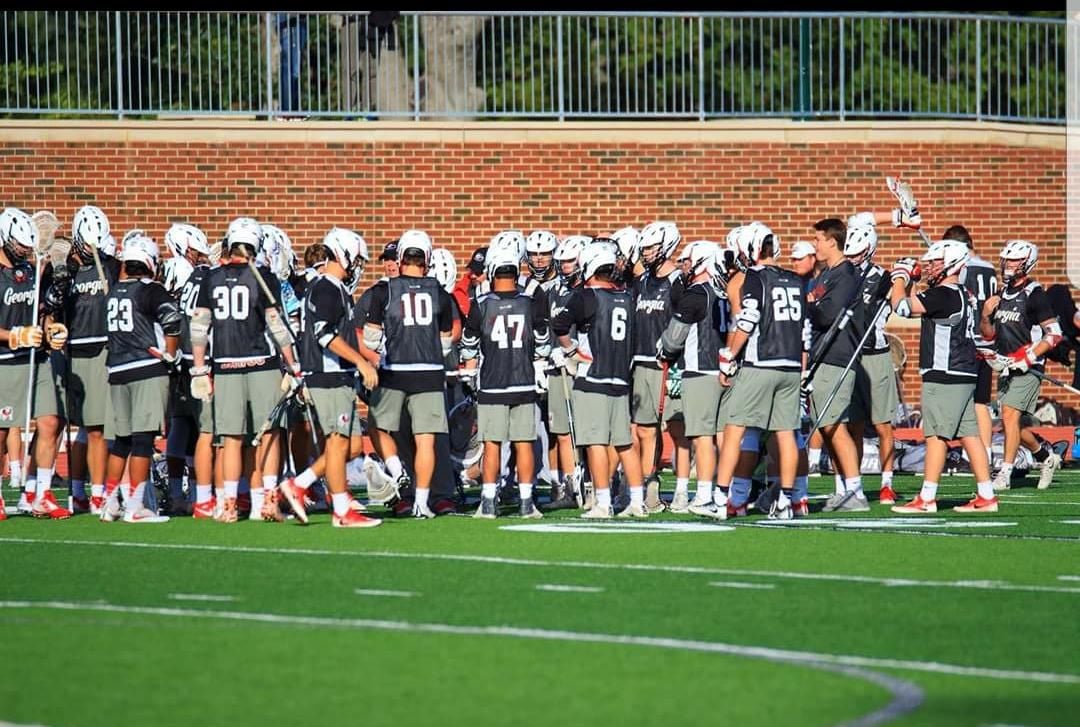 UGA team gathers during a timeout. 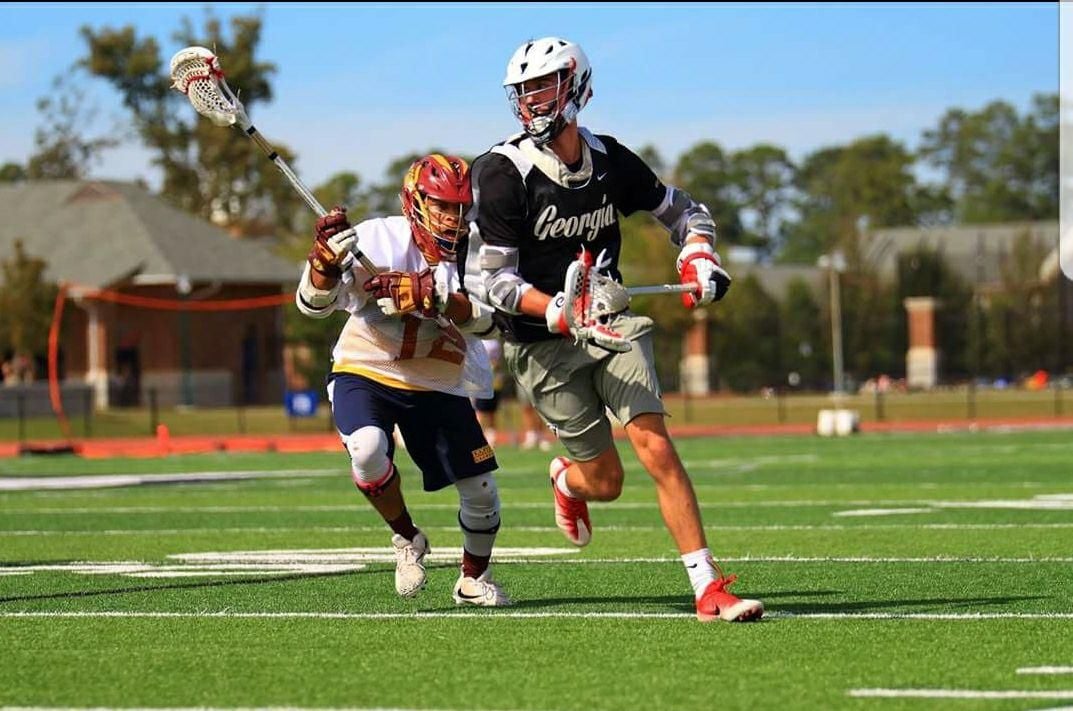 After a season without playoffs, Georgia men’s lacrosse is looking to get back to its winning ways after a successful fall season.

Head coach Billy O’Haire is heading into his fifth season of coaching at Georgia with high expectations for his team. He has been improving the program year to year throughout his tenure and started off the beginning of the fall semester continuing this trend.

“We normally wait until September to get going, but we felt it would be better to start early,” O’Haire said. “We started the second week in August, and we have been going nonstop since then. We wanted to get more scrimmages in this fall.”

For O’Haire, an earlier start to season comes with its own sacrifices and efforts. He lives in Atlanta where he is a police detective in the metropolitan Atlanta area. He commutes to Athens at least twice a week during the fall and spring semesters, a commute he has made for the past five years.

O’Haire and the rest of the coaching staff also travel across the state to try to recruit high school talents during the summer months.

Many of the top high school players in the state decide to continue their careers at UGA. The large university lifestyle along with the ability to still play lacrosse is very appealing to many players.

“Even though it’s a club team, we’re getting a lot of the top high school players around Georgia, because they want to go to UGA,” O’Haire said.

The recruitment of top high school players continues to grow each year. The team has added players from successful high school programs with recent state championships such as Roswell High School and Lassiter High School.

With talent joining the team over the past five years, the team looks to be back in contention for the Southeastern Lacrosse Conference title. In order to receive an automatic bid to the Men’s Collegiate Lacrosse Association’s national tournament, Georgia must go through the gauntlet of the SELC.

The conference title is decided by a conference playoff at the end of the season. Last year, Georgia missed the cut after losses to Auburn University and Georgia Institute of Technology late in the season.

Despite not making playoffs, O’Haire still praises last year’s team for finally holding its own in the game against the No. 4 ranked team in the country, Georgia Tech.

“The first half in that game last year was the best lacrosse I’ve seen at Georgia in five years,” O’Haire said.

Georgia led Georgia Tech at halftime last year, but went on to lose to the eventual SELC champions. Georgia Tech has won the SELC two years in a row, as well as making consecutive final four appearances in the national tournament.

The game ended in a loss for Georgia, but showed the strides the program has taken since O’Haire joined the team. He expects his team to return back to the playing at the same level it did in the first half against Georgia Tech last year.

In order to prepare for the new year, Georgia started the fall season with a much more demanding schedule.

The team began with a win in a scrimmage against Clemson University. Georgia defeated Clemson 8-6 in last year’s regular season game, and the two teams will play each other again in Georgia’s third game of the year.

O’Haire’s team carried the early fall season momentum into the Wounded Warrior Project: Faceoff for a Cause tournament at Berry College in Rome, Georgia.

“That tournament was a program first," O'Haire said. "To be invited to a NCAA tournament as a club team, I think the team represented the University of Georgia with great pride."

In the tournament, Georgia went against NCAA Division II schools, Emmanuel College and Shorter University, in its two scrimmages. Georgia came away with two more fall season victories after winning 13-3 against Emmanuel and 10-5 against Shorter.

For O’Haire, the fall scrimmages allow his coaching staff to bring new players into their coaching system and play style.

“Best thing about the tournament was that everyone got playing time,” O’Haire said. “Our goal wasn’t to go in and win it. Our biggest thing was making sure everyone got enough time and were tired by the end of it all.”

The team will look to continue its success into its last scrimmage at Piedmont College in early January.

The upcoming season is predicted to be one of the most difficult in recent program history. Georgia kicks off the regular season in the first week of February when the team travels to the University of South Carolina.

Georgia will also face last year’s national champions, Grand Canyon University, and then travel to No. 7 Arizona State University the next day.

The opportunity to play Grand Canyon highlights the trip with an environment most club lacrosse teams never imagine having.

“We’re playing Grand Canyon in their football stadium. Their university is very big and behind their lacrosse program,” O’Haire said. “They have thousands of people go to their lacrosse games. It’s going to be awesome. It’s great that we can make a trip like that this year.”

Grand Canyon and Arizona State are just two of the five top 12 teams Georgia will face this year. Nearly half of the games consist of games against top ranked opponents. Match-ups against Colorado State University, Florida State University and Georgia Tech will challenge Georgia throughout the course of the season.

Georgia will look to senior leadership from defender, Alex Gasta, and attackmen, Jack Ryan, to help the team on each side of the game in order to win against top-ranked opponents.

Gasta and Ryan add to the large senior class of 18 players. To O’Haire, the large amount of seniors will add to the strength of this year's team.

“Every group is special, but having 18 seniors and knowing this is their last year they get to play is a dangerous combination,” O’Haire said. “These top teams need to watch out, because we’re coming at everyone this year.”

How much can you say in 140 characters? According to the Georgia men’s club lacrosse team, a lot.

The UGA lacrosse club program has enjoyed recent success not only on the field, but also by garnering a following on campus in general thanks to its notable social media presence. This presence has also brought them national recognition.

Billy O’Haire stood in the middle of a circle comprised of 35 college lacrosse players. For five minutes he rotated counterclockwise, looking at each one while delivering a speech reminiscent of Herb Brooks speaking to the 1980 U.S. Olympic hockey team the night it faced the Soviet Union.