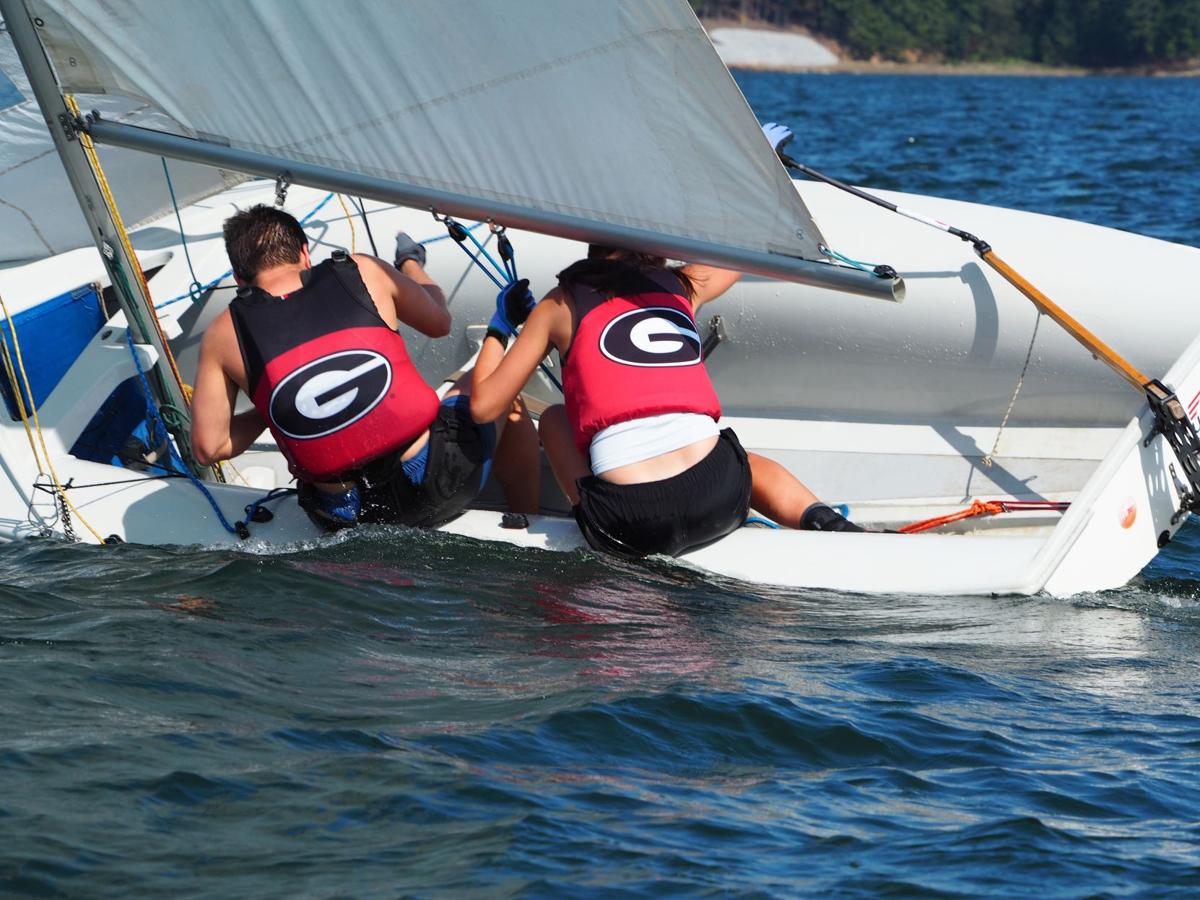 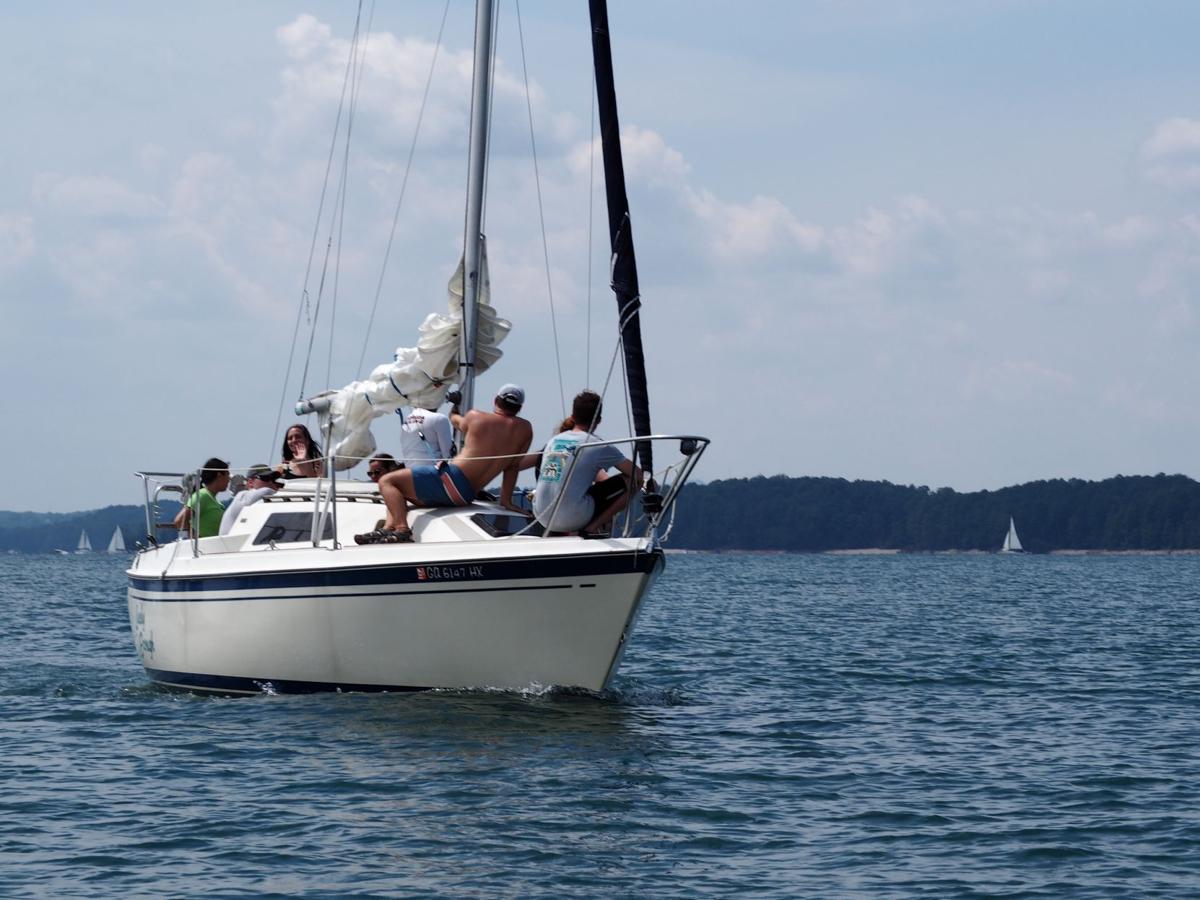 The cruising team of the Georgia club sailing is pictured at the team's open house on August 26, 2017 at Lake Lanier. 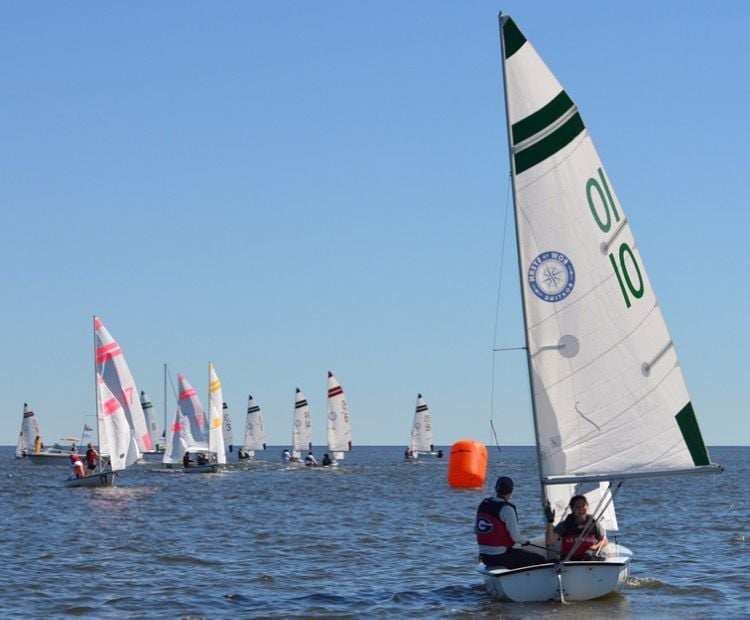 Tim Dewitt and Madison Monroe are pictured at the NC State intercollegiate Regatta in the spring of 2017. 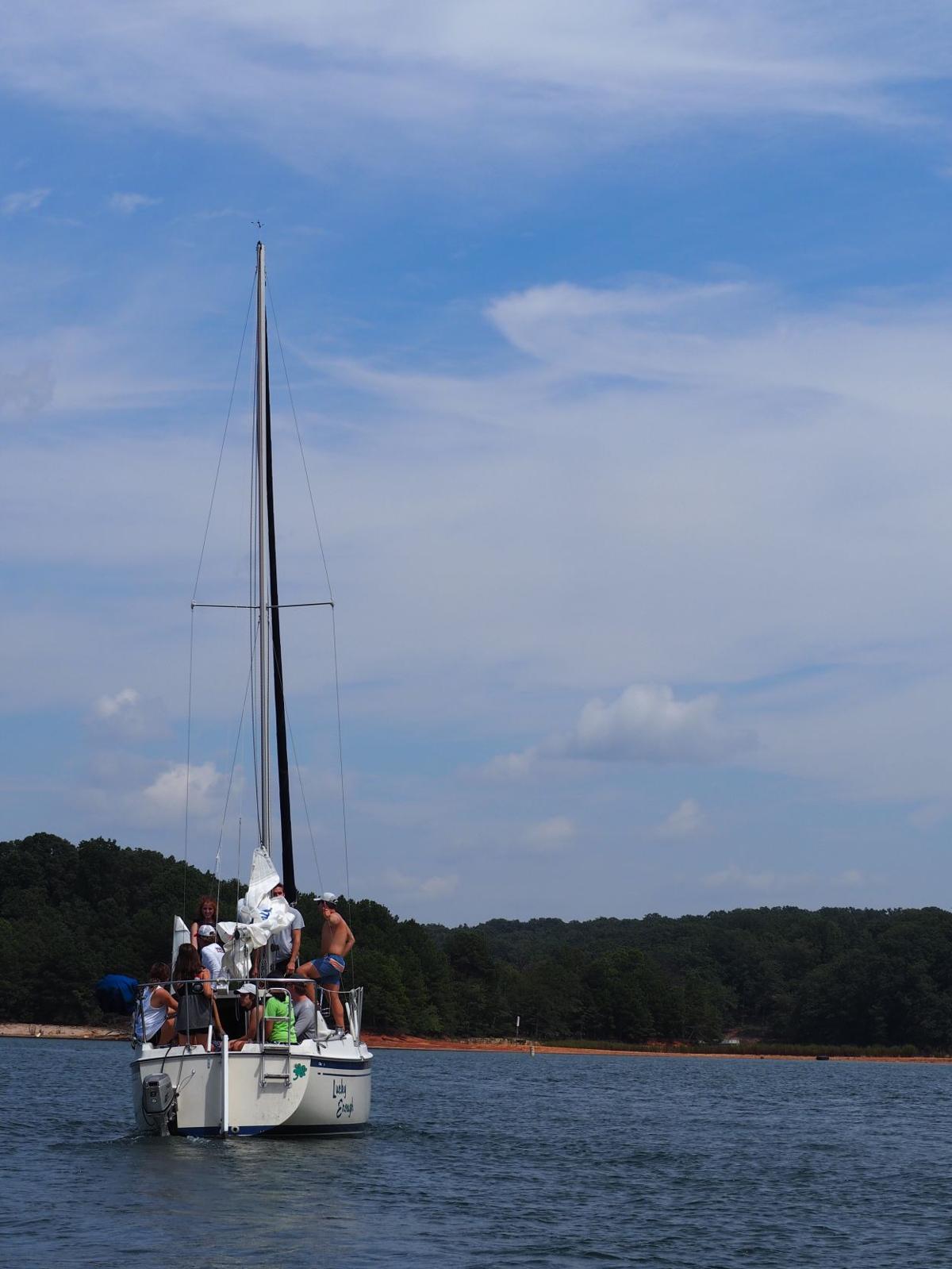 The Georgia club sailing team's curising team boat is pictured at the team's open house on September 26, 2017 in Lake Lanier. 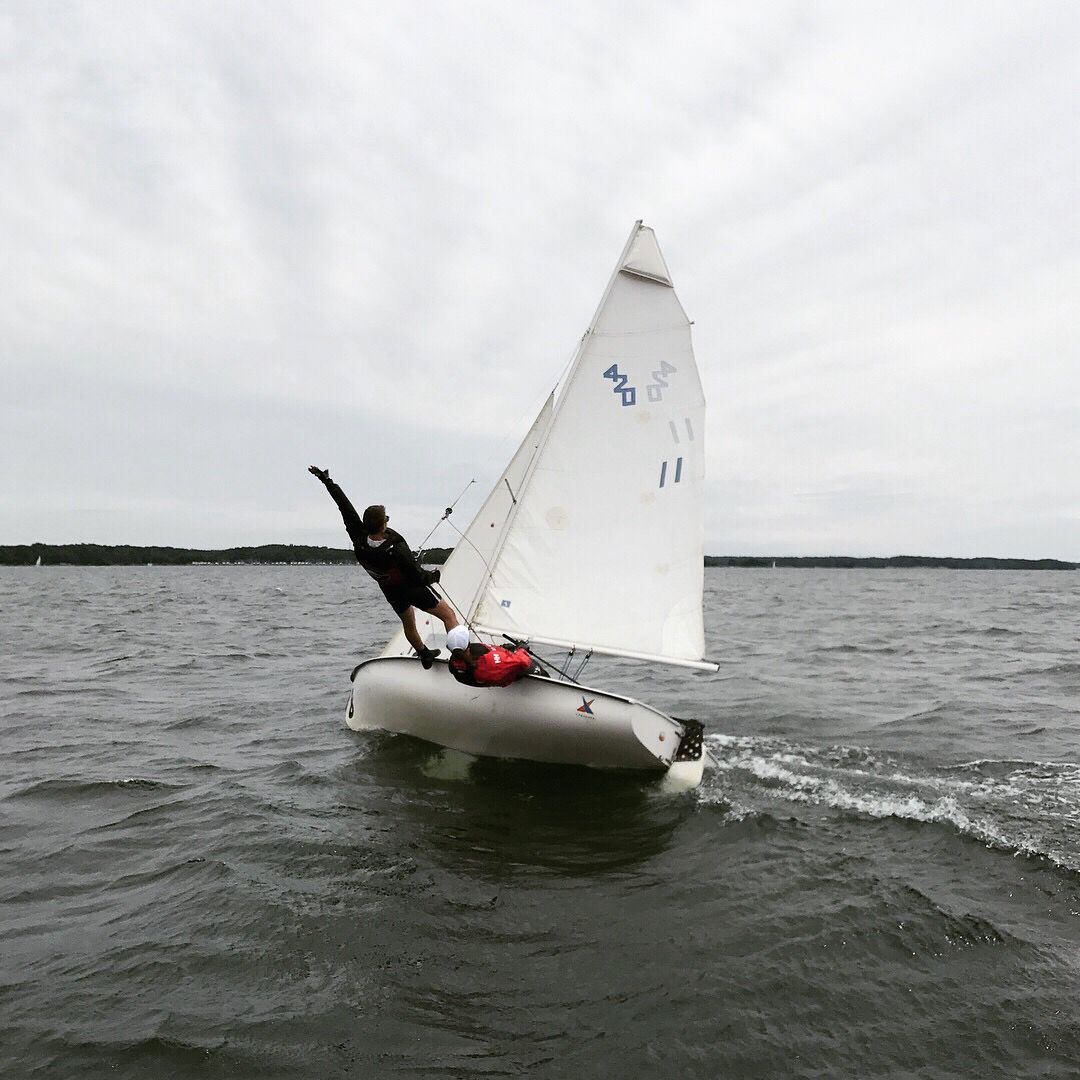 Although Georgia’s club sailing team has existed for 40 years, a late October night in 2014 at the Zell B. Miller Learning Center sparked a great deal of change for the club.

The growth began one late autumn night when Tim DeWitt, who was the club’s treasurer at the time, sat in his usual hangout spot in the digital media lab on the third floor. He started crunching numbers to justify using the Lake Lanier Sailing Club as a location for the team’s practices. There was substantial risk in the investment, and a lot of thought was put into the decision because the Lake Lanier Sailing Club requires a membership fee of $7,000 per year.

DeWitt, who was also the club’s president up until Fall 2017, was able to hypothetically plan out how the upcoming year could go.

He looked at the feasibility of involving the team with the sailing club in order to give it more opportunities to use specific types of racing boats for competitions and increase membership in the sport.

These boats are expensive to buy and maintain, so if the sailing team didn’t have access to Lake Lanier’s resources, the team would have needed to purchase the boats itself.

Georgia was able to join the sailing club in 2015, providing the catalyst for the subsequent growth.

About four years ago, the sailing team operated out of a small lake in Sandy Creek Park called Lake Chapman. The team only had access to small, run down boats and one of them had a huge hole in the sail. There were few members involved in the sport at the time, and there was a struggle to gain new interest and expand.

“When our only senior, Erica [Trotter], joined the team, there were only four members, but now we’re up to 45 members,” racing team captain Allison Chenard said.

By joining the Lake Lanier Sailing Club, the team went from having no boats to race in to having nine boats to use. The sailing club also maintains the boats so if one breaks, the facility will fix it for the team.

“You may not know anything about sailing, but it's awesome because you're put in that environment where you can go out there and be uncomfortable,” cruising team captain Julia Silverman said. “But that's the point, to be uncomfortable.”

The sailing team is separated into two divisions – a racing team and a cruising team.

The racing team uses 420 sailing boats or International Flying Juniors (FJs) to sail in regattas. There are six regattas to compete in per year, which are racing events held throughout the eastern coast of the United States.

The 420 boats are controlled by two people at a time and are agile enough to sail in a wide range of conditions. However, the boats tip whenever the wind blows so sailors are constantly multitasking by pulling on the main sail, trying to keep the rudders straight, and leaning out across the water to keep the boat steady.

The cruising team, on the other hand, uses keel boats to sail in and meets about twice a month. These boats are slightly bigger and steadier than the rocky 420s. This division is aimed at members who want to leisurely sail on the water with a bigger group.

Neither division of the team has to transport boats for away competitions since the hosting team supplies the necessary equipment.

There is a tradition among the veteran players to flip the boats whenever a new, inexperienced member comes aboard for the first time in order to get them accustomed to going into the water.

“The first thing I try to do with new people is flip the boat over because that’s the thing people are most scared of,” Chenard said. “As soon as you get them over the fear of going into the water, they don’t worry about the boat rocking a little. If you show them the worst that could happen, they’re fearless from that point on.”

No matter how experienced a sailor may be, tipping the boat over is common.

Emma Cronin, the social media director for the team, knows this all too well. She has been sailing since high school and joined the team two years ago. It took her 14 years to finally capsize a boat.

While she was sailing with a guy who was new to skippering, Chenard had him hop out and go onto the coach boat to show him how to do a proper roll tag.

“Of course, I screw it up to hell,” Cronin said. “I get stuck in the bottom and I fell out but I was still holding on to one of the sheets so I dragged the boat over with me. I liked having a streak, but smooth seas don’t make for a skilled sailor.”

Some members, such as DeWitt and Alex Sullivan enjoy getting out on the water and don’t have a preference for either cruising or racing division.

“I don’t consider myself an extremely competitive sailor, but I prefer racing because it permits you to have much more autonomy over the boat,” Sullivan said, who is a senior and joined the team in September 2016.

For Silverman, the best part about being the cruising team captain is the inner satisfaction she gets from teaching people the skills she loves.

“I love sailing,” Cronin said. “I could probably die sailing and still be pretty happy about it.”

Learning Together & Looking Ahead

Chenard produces ChalkTalks as a way to teach newer members the basics of sailing, such as the parts of the boat and methods for skippering before they embark on the water. This ensures that everyone, no matter skill level, has the same foundational knowledge. This also gets members involved as quickly as possible through teaching valuable skills such as rope tying, hanging a sail, and tracking the wind.

The team uses technology such as an interactive and user friendly website to entice more people to get involved. The team also utilizes numerous branches of personnel, including the Laker Lanier’s water front director, to spread out the work of promoting the club with specialized tasks.

“We were having a hard time with the commitment,” Chenard said. “We have to go an hour away to practice, and that paired with school and a lot of other factors, made people just not show up.”

The officers combined their efforts to create a solution to their lackadaisical practice attendance by coming up with a point system. It awards members two points for attending practices, one point for watching the ChalkTalk videos produced by Chenard, and a half point for taking leisure sails. Chenard keeps track of the points by logging them in an excel spreadsheet.

This point system was developed for the spring 2017 semester as an incentive to keep members engaged and committed to the sport. Last semester, the team only saw a maximum of two boats on the water during practices, but the system has improved the attendance to five boats per practice.

It is also used to decide the roster for who gets to compete at regattas. The top six members who have attended practice and watched the ChalkTalk videos are chosen to attend. Team members are able to see where the choices in the roster come from instead of a captain just choosing six people.

The team is continuously looking forward to teaching new members all about sailing.

"What's awesome is that not only did we meet our goals,” DeWitt said, “but we also have continuously taken it to the next level.”

The team also took a trip to the British Virgin Islands to sail this past spring break and it plans to do it again next year. The club looks forward to establishing a prize award for those members who obtain the most points during the year.

DeWitt has passed the team leadership along to Jenny Cahalan, as he will be graduating at the end of the Fall 2017 semester. Under her presidency, the club has already seen growth from 45 participating members to 60.

The club has also managed to accomplish its goal of expanding to encompass a separate women’s racing team. It hopes to attend up to four events specifically for the women’s team, which is an improvement from the one event attended last competition season.

Regardless of their progress, though, the team hopes to remain true to its main goal of teaching people about sailing. And to think, it all began one late October night in 2014.

“It honestly started one night in the MLC when I was crunching numbers in a spreadsheet trying to make it work,” DeWitt said. “And I made it work.”

For the first time in nearly a year and a half, the club sports teams will be able to use their own complex again for practice.

Keep playing well. That was the motto for Georgia’s club golf team entering this semester. Coming into the spring, the Georgia club golf team was ranked No. 1 following its national championship victory last fall at Disney World. Now sitting ranked No. 58, there is a lot to reflect on from this past season.

At the beginning of any team's season, no matter what the sport, the primary goal of the season is to try to win the championship in its respected league.

Megan Crozier, finished first place in her age group in the IRONMAN 70.3 in Augusta, and earned a spot in the IRONMAN African Championship in South Africa in April of 2018.