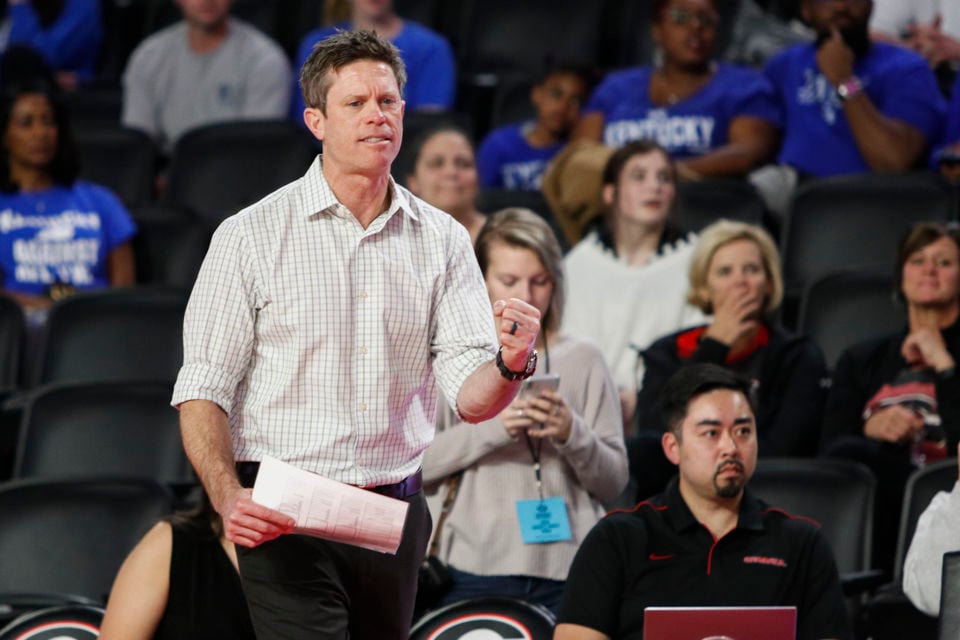 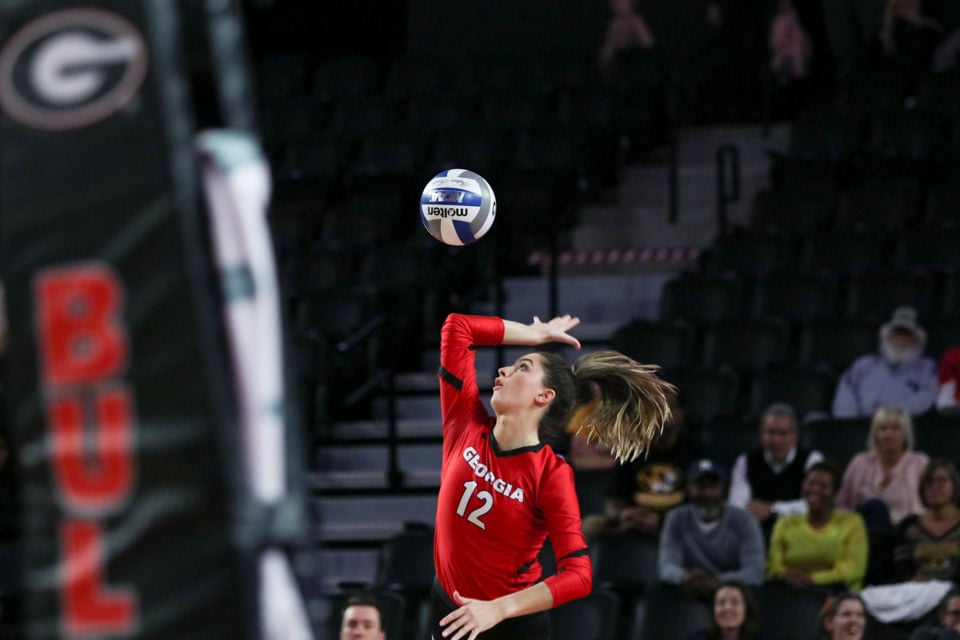 University of Georgiajunior defensive specialist Brynn Chandler (12) serves the ball during their match against University of Missouri at Stegeman Coliseum in Athens, Georgia, on Sunday, Nov. 10, 2019. The Lady Bulldogs lost to the Tigers in four sets. (Photo/Caroline Barnes)

Georgia volleyball head coach Tom Black did nothing this season but prove that the program is steadily moving in the right direction.

A year ago, the Georgia volleyball team endured an 11-game stretch where it won only one game. The Bulldogs finished the 2018 season with a 15-14 record, an unanticipated drop off from Georgia’s 22-win season in Black’s first year in Athens.

Because of that, not much was expected from the Bulldogs in 2019. They were chosen to finish eighth in the SEC Preseason Coaches’ Poll and only had one senior.

Georgia started the season by clinging on to a 3-3 record. After a 3-0 loss against Texas State, the Bulldogs responded by outscoring their next six opponents 18-to-5, giving a glimpse of how good they could be. Georgia rode that momentum to finish the season 20-10, registering its fourth 20-win season in the past 21 years.

There was some good, but there were also bad. Here’s why the Bulldogs exceeded outsiders’ expectations but slipped down the stretch on their way to losing six of their final 11 matches.

Defeating SEC powerhouse Kentucky on the road and making the first NCAA tournament in six seasons highlighted the best moments of the Bulldogs’ season. The Bulldogs were rich with newcomers, who helped lead them to success.

Kacie Evans, the 2019 SEC Freshman of the Year, was the first surprise. It wasn’t because there was any doubt that Evans had talent — she was a Third Team Under Armour All-American in high school. But she was only a freshman. Even still, she made an immediate impact by leading Georgia in kills and digs in the season opener against Clemson but struggled with consistency until a match against then-No. 12 Florida on Sept. 29. Evans led the Bulldogs in kills in 16 of the next 18 matches, providing the necessary spark on offense.

Junior Brynn Chandler also stepped into the spotlight. After playing in only 16 sets during her sophomore season, Chandler finished as one of four Bulldogs to play in all 112 sets. Georgia was third in the SEC in total aces, and Chandler led the team with 35.

Senior setter Meghan Donovan led Georgia in assists for the fourth year in a row with 1,271, as well as garnering All-SEC honors for the first time in her career. Georgia finished third in the SEC in assists and kills, with 12.94 assists per set and 13.83 kills per set, and Donovan was a significant reason why.

One of the more significant issues for the Bulldogs’ struggles were on the defensive side. Georgia finished last in the SEC in total blocks and eighth in digs per set. Because of such low numbers, it’s no surprise that opponents had an average hitting percentage of .227 when facing Georgia, which ranks 11th in the SEC.

Errors were another significant problem for Georgia. In all 30 matches, the Bulldogs committed fewer errors than its opponent only three times. Fixing the large gap in errors will likely be one of the greater concerns for Georgia heading into the offseason.

All in all, a trip to the NCAA tournament symbolized the program's growth. Black’s third season was a step in the right direction, and with all but one player returning for next season, another year of improvement might be imminent.

Georgia’s Kacie Evans and Meghan Donovan received honors for their play after the end of the regular season. Evans was named the 2019 SEC Freshman of the Year, and senior Donovan was honored with All-SEC accolades.

Meghan Donovan was recognized by teammates, coaches, family, and fans for her four years as a Bulldog, acknowledging a career that includes 4,814 assists and 1,037 digs.