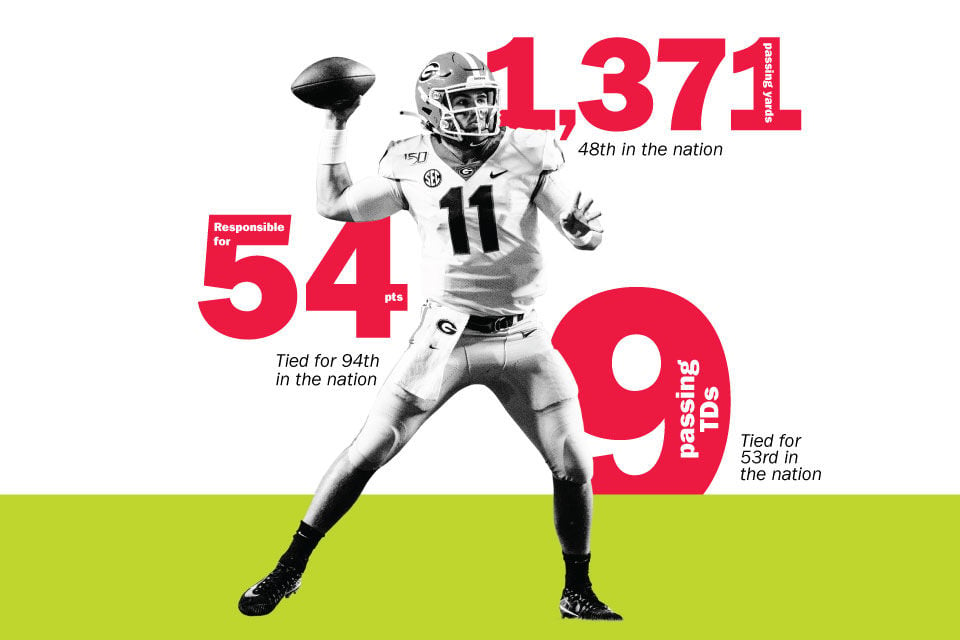 Georgia quarterback Jake Fromm falls behind other SEC quarterbacks, such as Alabama’s Tua Tagovailoa and LSU’s Joe Burrow, in several statistical categories in 2019. 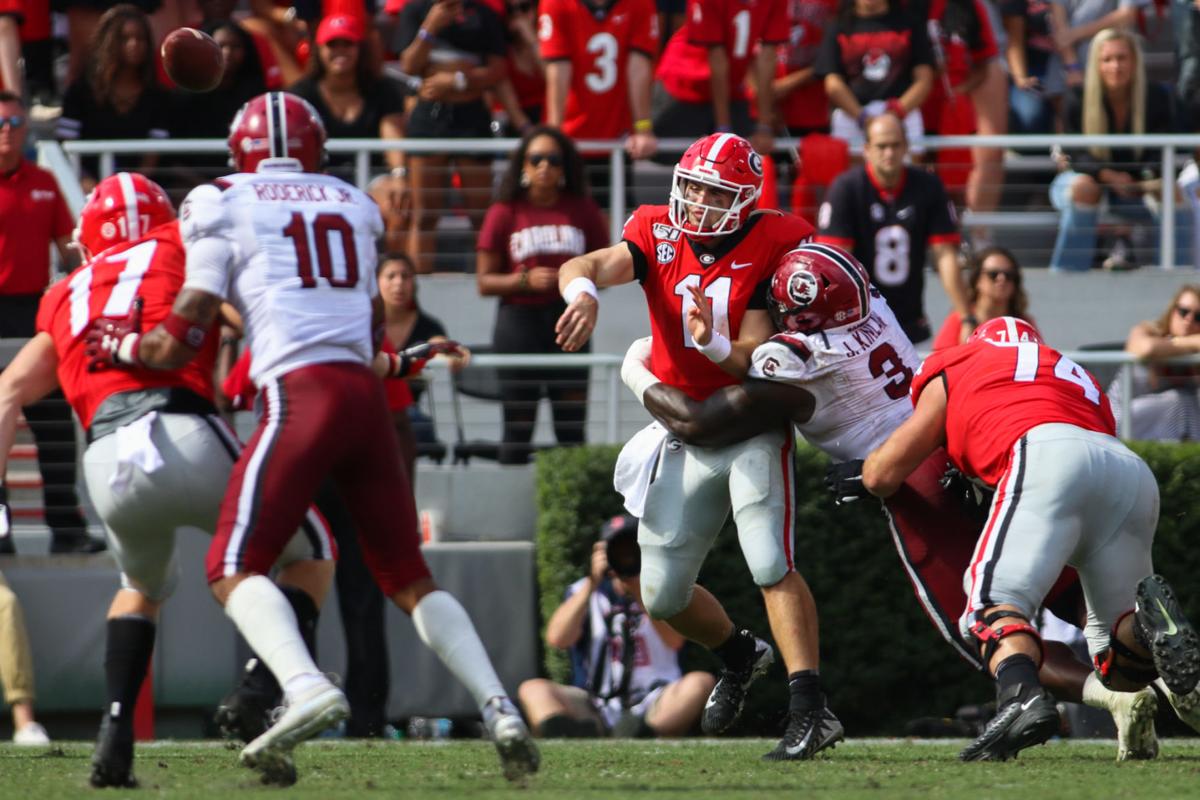 Georgia quarterback Jake Fromm (11) is tackled as he throws the ball. The Georgia Bulldogs lost in double-overtime to the South Carolina Gamecocks with a final score 17-20 on Saturday, Oct. 12, 2019, in Athens, Georgia. (Photo/Gabriella Audi https://gabbyaudi10.wixsite.com/mysite-1)

Jake Fromm has been good in 2019, but has he been good enough?

Now in his third season at the helm of the Georgia offense, all eyes are on Fromm to do something no Bulldog quarterback has done since 1980: lead his team to a national title. His leadership and intangibles are constantly praised. After all, it takes a special player to unseat one five-star quarterback and keep the starting job from another.

But Fromm put up a three-interception performance in a loss to unranked South Carolina on Oct. 12. Putting leadership skills and pre-snap reads aside, statistics show that Fromm has been far from the elite quarterback that he was expected to be in 2019.

Not in elite company

Of course, that isn’t all on Fromm. The Bulldogs are a run-first team. But former Florida quarterback and Heisman Trophy winner Tim Tebow says that won’t be enough to win a national championship.

“It’s being able to throw it when you have to,” Tebow said on Oct. 11. “There’s going to be a time — and there is for every team that wins a national championship — when it’s just not going your way. You have to say, ‘We’re putting it on this dude to win it,’ and I think that has to be Jake [Fromm]. I think he can do it, but I want to see Georgia give him the chance.”

But there are other statistics that aren’t influenced by Georgia’s offensive style, and Fromm is no better in those. The Bulldogs are 0-5 in games when Fromm had 30 or more pass attempts.

Here’s a blind résumé: Player X has been responsible for 86 of his team’s points in 2019, ranking 30th in the country in that category. Player Y is ranked 94th, responsible for 54 points.

Player X? University of North Carolina-Charlotte quarterback Chris Reynolds, who has led the 49ers to a 2-4 record. Player Y? You guessed it — Fromm.

Fromm has never been the quarterback to light up the scoreboard with big chunk plays in the passing game. According to Pro Football Focus (PFF), Fromm’s average depth of target this season is just 9.9 yards past the line of scrimmage, ranking 39th in the country.

“He’s not really a guy that’s going to push the ball down the field too much,” PFF Senior College Football Analyst Cam Mellor said. “I don’t really want to label him a ‘game manager,’ but he’s not the most exciting quarterback. He doesn’t make the highlight plays that Joe Burrow or Tua Tagovailoa make on a regular basis.”

Tagovailoa and Burrow are arguably the two best quarterbacks in college football at the moment, but it isn’t just the best of the best who are throwing the deep ball often. Most of the SEC does it more than Fromm. Arkansas’s Nick Starkel, Missouri’s Kelly Bryant, Florida’s Kyle Trask and Tennessee’s Jarrett Guarantano join Burrow and Tagovailoa ahead of Fromm in terms of yards per completion.

“If [Jake] wants to shed this ‘game manager’ label, he needs to show that he can make these 50-yard throws down the field,” Mellor said.

Despite some statistical shortcomings, Fromm is still one of the best quarterback prospects in college football.

As a junior, Fromm is one of several high-profile quarterbacks who are eligible to declare for the NFL draft after this season. Tagovailoa, Burrow and Oregon’s Justin Herbert are all likely to join Fromm in the 2020 NFL Draft class should he decide to forgo his senior season at Georgia. The competition is stiff, but Fromm is considered to be one of the top options for NFL teams looking to draft a quarterback.

“He’s a guy that does everything that’s asked of him,” Mellor said. “He’s not a guy that’s grading poorly. He was third in the country in terms of fewest negatively graded clips.”

He added a few more “negative clips” in the loss to South Carolina, but prior that game, PFF gave Fromm a higher grade than any other quarterback in the country. His smart decision-making is something that translates well to the NFL.

“I think between the ears, he’s the best,” former Georgia quarterback Aaron Murray said. “Probably the two best things you’d want from a quarterback are leadership and then what do you got between the ears, and I would rank him No. 1 for both of those … That’s a huge thing when it comes to NFL scouts evaluating.”

Fromm is still the same quarterback that has led the Bulldogs to a 29-6 record and a national championship appearance. His performance against South Carolina doesn’t change much.

“Every quarterback gets a mulligan,” Mellor said. “Trevor Lawrence had a terrible game against Syracuse this season but he’s now rebounded and had a couple of terrific games. We’ve seen the top level quarterbacks be able to shake off these bad games.”

Kirby Smart never has an issue gushing on about how he and the rest of his coaching staff constantly study numbers and patterns to set standards for the program. But there’s one number that Georgia is consistently missing: explosive plays.

Catch up on all that you might have missed from the world of Georgia sports with this handy guide from The Red & Black.

What to watch for heading into Georgia’s matchup with Kentucky

No. 10 Georgia will face Kentucky at 6 p.m. on ESPN. Here are three things to know before the game.

It wasn’t long ago that Lynn Bowden Jr. was catching passes for Kentucky.

4 numbers to know before Georgia's game against Kentucky

No. 3 UGA will face Kentucky at 6 p.m. on Saturday in Sanford Stadium. Here are some numbers to know before the game:

PODCAST: Analyzing Georgia's overtime loss to South Carolina and talking the popularity of e-cigarettes among students

No. 10 Georgia and Kentucky are tied 0-0 at halftime at Sanford Stadium. Here are some takeaways from The Red & Black.

The Red & Black’s assistant sports editor Augusta Stone spoke with former UGA quarterback Aaron Murray ahead of this year’s matchup with Florida in Jacksonville, Florida. A four-year starter from 2010-2013, Murray holds the Georgia record for most career passing yards (13,166) and the SEC record for most career pass completions (921). Murray was raised in Tampa, Florida, and was a 2018 inductee into the Florida-Georgia Hall of Fame.

Myan Patel, Nathan Moore and Henry Queen sat down on Oct. 18 to discuss Georgia football's loss to South Carolina and its upcoming game against Kentucky.