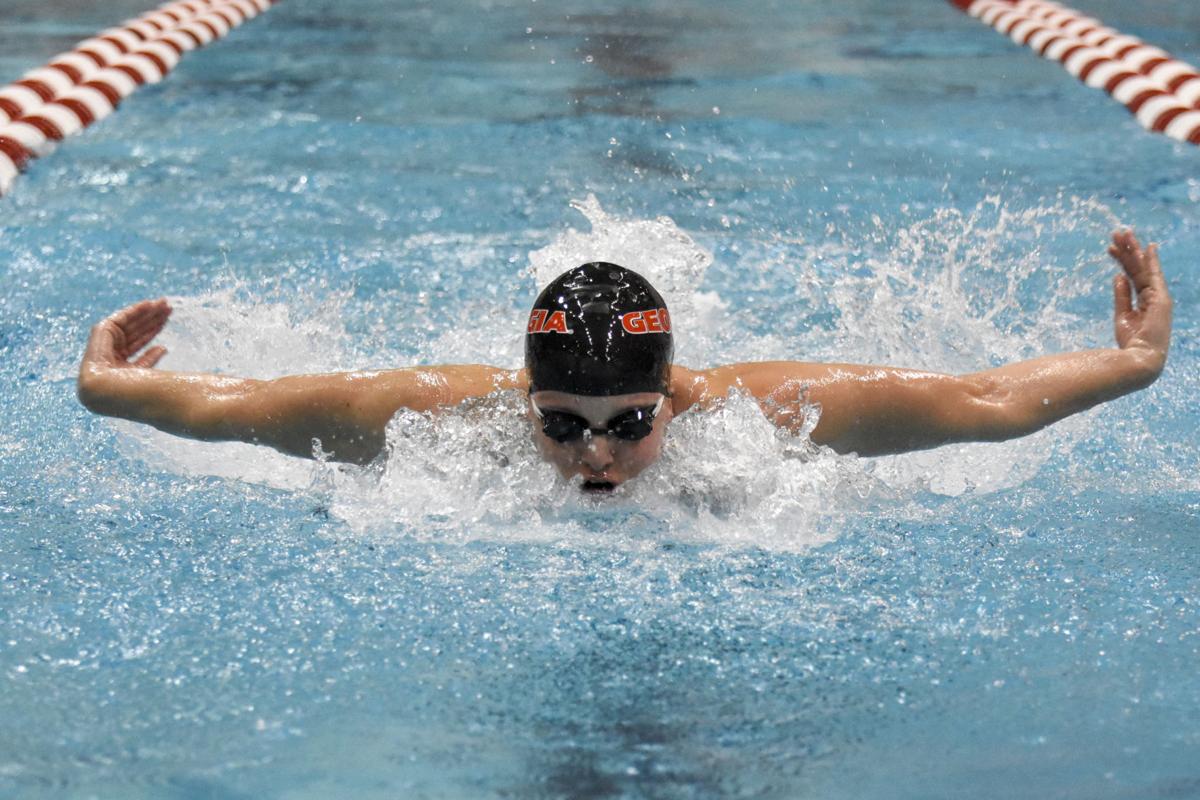 University of Georgia junior Emily Cameron competes in the women's 400-yard IM finals during day two of the Georgia Fall Invitational at the Gabrielsen Natatorium on Saturday, Dec. 5, 2015 in Athens, Ga. (Photo/David A. Barnes) 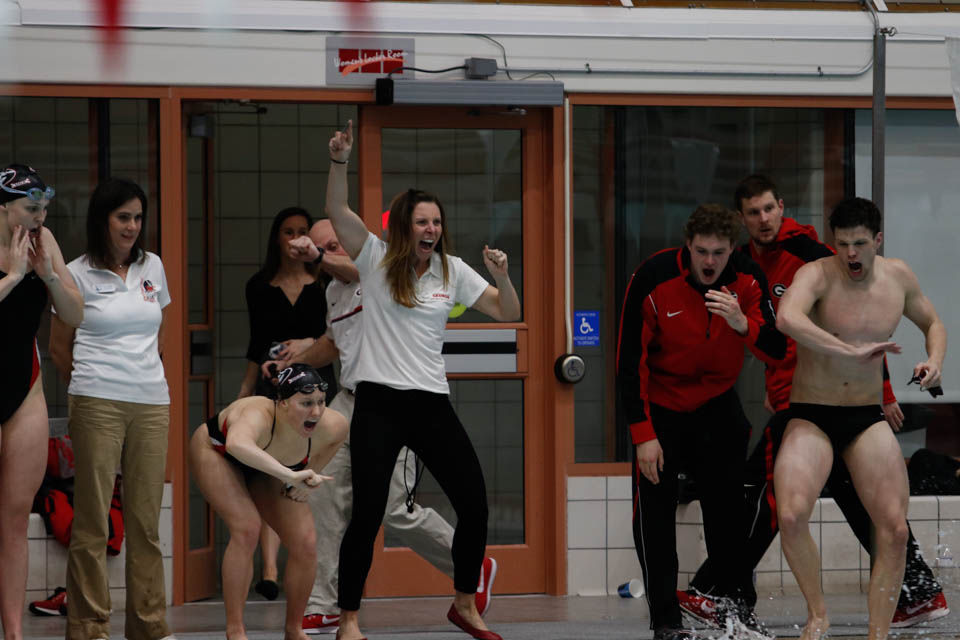 University of Georgia swimming coach Stefanie Williams cheers aduring the men's 400-yard freestyle relay in a dual meet against the University of Tennessee in Athens, Georgia on Saturday, January 20, 2018. The Bulldogs tied with the Volunteers 150-150 while the Lady Bulldogs defeated the Lady Volunteers 169-129. (Photo/Vira Halim, www.virahalim.wordpress.com) 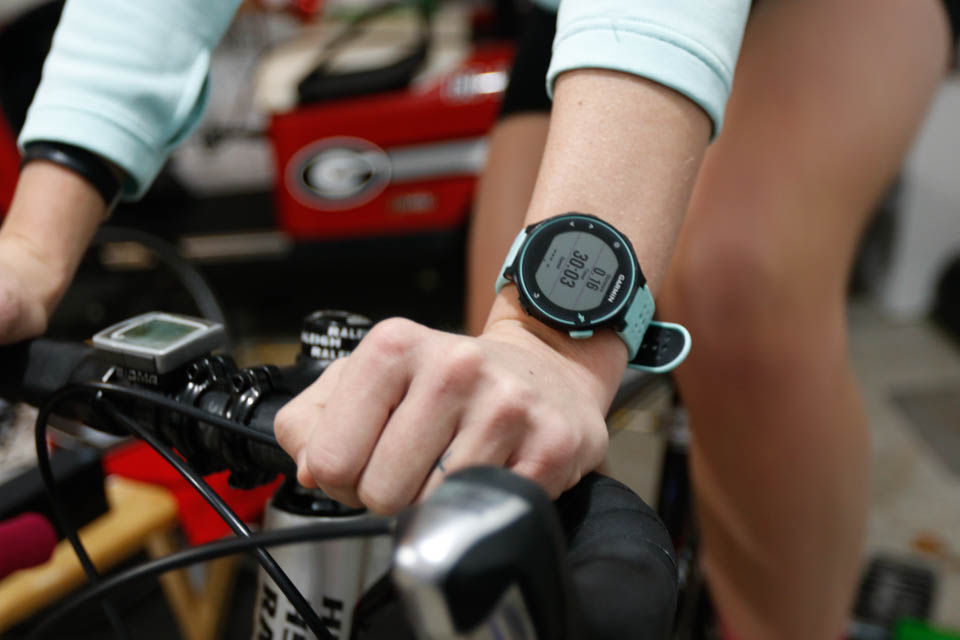 Former University of Georgia swimmer Emily Cameron works out on a bike trainer in the garage of UGA swimming coach Stefanie Williams on Friday, January 19, 2018. Cameron bikes five to six times a week as part of her triathlon training program. (Photo/Vira Halim, www.virahalim.wordpress.com) 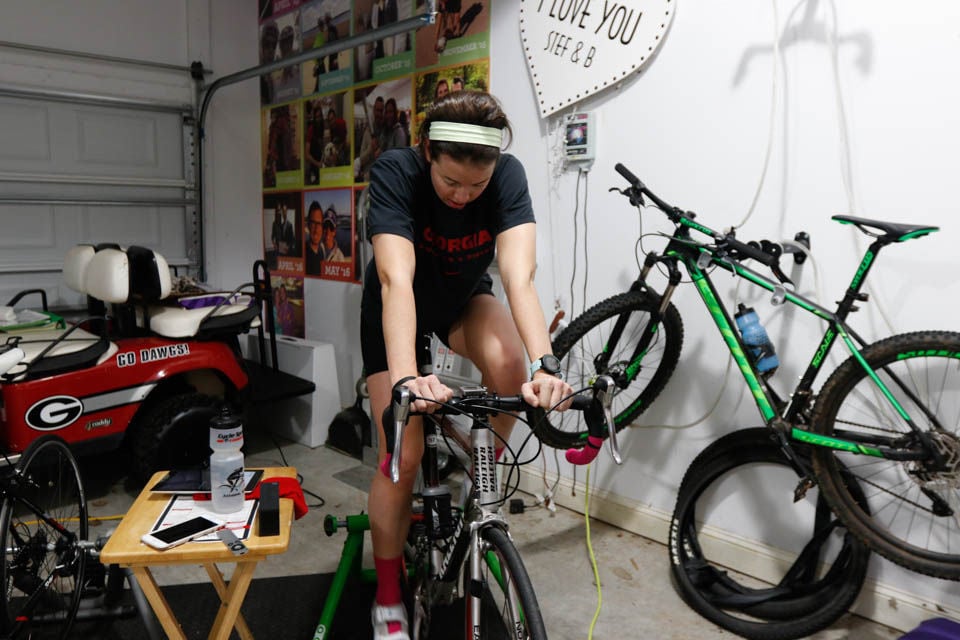 Former University of Georgia swimmer Emily Cameron works out on a bike trainer in the garage of UGA swimming coach Stefanie Williams on Friday, January 19, 2018. Cameron bikes five to six times a week as part of her triathlon training program. (Photo/Vira Halim, www.virahalim.wordpress.com)

At 6 a.m. on a Friday morning in Athens, many college students are still buried beneath the covers. The pull of responsibilities and academic obligations are somehow even more unappealing as the biting January air lies waiting outside to greet them.

But former University of Georgia swimmer Emily Cameron is wide awake, pedaling away on a bike trainer and peeling off her first set of layers as she begins to break a sweat. Cameron transitioned into a triathlete after concluding her collegiate swimming career in March. She has since raced five triathlons, including a 10th place finish in the USA Triathlon women’s collegiate national championship.

“Doesn’t surprise me in the least,” UGA head swimming and diving coach Jack Bauerle said. “She was our best runner here for four years, and I knew there was no way in the world that she would be able to sit and take it easy.”

With a high school running background, that left one discipline left for Cameron to learn: cycling. From swimming at practice every day with nearly 70 teammates, she transitioned into a routine of predominantly individual training on a bike trainer.

Cameron trains on her grandfather’s old bike in a garage where a neighbor’s cat, Lenny, frequently sneaks in, blatantly seeking attention from another solitary soul. The walls flaunt race memorabilia, bibs, handmade wooden signs and a large photo collage detailing a couple’s year together. The woman in the pictures is UGA swimming and diving assistant coach Stefanie Williams Moreno with her husband Brandon Moreno.

Throughout Cameron’s four years of swimming at Georgia, Williams Moreno served as an integral mentor for her both as an athlete and a young adult.

Williams Moreno, who has also completed seven marathons, three half Ironmans, and the 2015 Iron Man Wisconsin, continues to support her former swimmer in her current endeavors. She guided Cameron from a freshman swimmer into a leader in the UGA individual medley records. For Cameron, the characteristics of Georgia swimming instilled in her still apply every day in her triathlon training.

“Hard work, dedication, just commitment,” Cameron said. “It’s one thing to be committed to just your individual goal, and it’s difficult coming from competing for a team goal to just focusing on yourself. I wanted to make sure that it’s bigger than just me and myself.”

Cameron concluded her eligibility as a two-time national champion and part of a women’s team that finished in fourth place at the 2017 NCAA swimming and diving championships.

Cameron, a political science and international affairs double major, is completing her undergraduate degree and will graduate in May 2018. While she is considered a UGA swimming alumna, she continues to train in the pool alongside her former teammates.

“It’s motivational being around people who have such high goals for themselves, so I try to be around them as much as possible,” Cameron said.

From her freshman year when she struggled and sometimes failed to balance the weighty obligations of swimming, school and a social life, Cameron grew into and embraced her role on the Georgia swimming team. She looked up to former swimmers like Amber McDermott, Shannon O’Malley and Jordan Mattern, absorbing aspects of their leadership styles to adopt as her own. Soon, peers and underclassmen both looked to her for friendship and guidance.

“She was the first one to be like, ‘hey let’s go get coffee,’ or ‘hey, let’s go grab some dinner. How can I help you?’” Williams Moreno said. “Sometimes you need someone to just listen and offer advice, and she was really good at that.”

Cameron’s role on the team surpassed the function of a peer counselor as she excelled in the pool and the weight room. She won races, she scored points, and her name was a fixture on the honor roll. She also contributed to her school and community through the church and organizations like the Student Athlete Advisory Committee and Leadership Education and Development.

While her time competing for collegiate championships in the pool is over, Cameron has yet to near the finish line of her time in Athens. She has been accepted into the College of Education graduate program for a degree in College Student Affairs and will begin in the fall of 2018. She thrives in motivating others in sports and will pursue a career in student-athlete development in two years.

As she continues her triathlon training and preparing for a graduate degree, Cameron has discovered a new community in the Classic City that welcomed her with open arms.

Moreno helped his wife’s former athlete secure a job at Fleet Feet Sports to help her connect with runners in the community and begin networking for sponsorships.

On her days away from the Morenos’ garage, she rides with a group from Hub Bicycles.

“You’d be surprised how many triathletes are in town or come to Athens to cycle, to swim, just with the weather and stuff,” Williams Moreno said. “The swimming community is small, so now she has a whole other group, a whole other avenue to train with.”

The benefits are mutual. Cameron has a close community of resources to help her succeed in her third discipline, and those within the community have a people-oriented athlete with a successful collegiate background to offer advice in swimming.

Cameron is already attaining success in triathlons, even winning her age group in the Tri To Beat Cancer Triathlon in August of 2017 with her grandfather’s bike. Since then, she has acquired a triathlon bike and looks forward to extending her career, not just in swimming, but in competition.

“She challenges herself, and she challenged herself in school, too,” Bauerle said. “I’m as proud of Emily as any athlete that’s walked through. She did everything she needed to do to be good in school and swimming. Plus, she’s a heck of a babysitter.”

Halfway through the diving portion of Georgia’s dual meet against Tennessee, Ian Forlini and his fellow seniors waited to be recognized. One by one, the swimmers and divers walked through a tunnel made by their teammates’ arms before being greeted by family members who held flowers.

The University of Georgia swimming and diving team commemorated it’s senior class at their home meet against the University of Tennessee. This meet was a matchup against Southeastern Conference rivals but also between sibling rivals.

Swimmer Gunnar Bentz set to return from injury against LSU on Jan. 13

Gunnar Bentz missed several months after suffering a collarbone injury but is set to return on Saturday.

For University of Georgia students, Creswell Hall brings back memories of freshman year. When considering the history of the college, however,…

Since joining the team this year, Georgia swimming freshman Camden Murphy has made an immediate impact.

On Jan. 13, Georgia freshman Gabi Fa’amausili dove into the water for her collegiate swimming debut against LSU.

Sophomore Lexi Glunn was not expected to win her races on Jan. 20 for the Georgia swimming and diving team.

Georgia’s final dual-meet of the season versus Emory serves as the swimmers’ proving ground before head coach Jack Bauerle decides on the roster for the SEC championship in two weeks.

Georgia swimming head coach Jack Bauerle knew freshman Greg Reed was a fast swimmer. But he did not expect Reed to be this good in just his first year at Georgia.