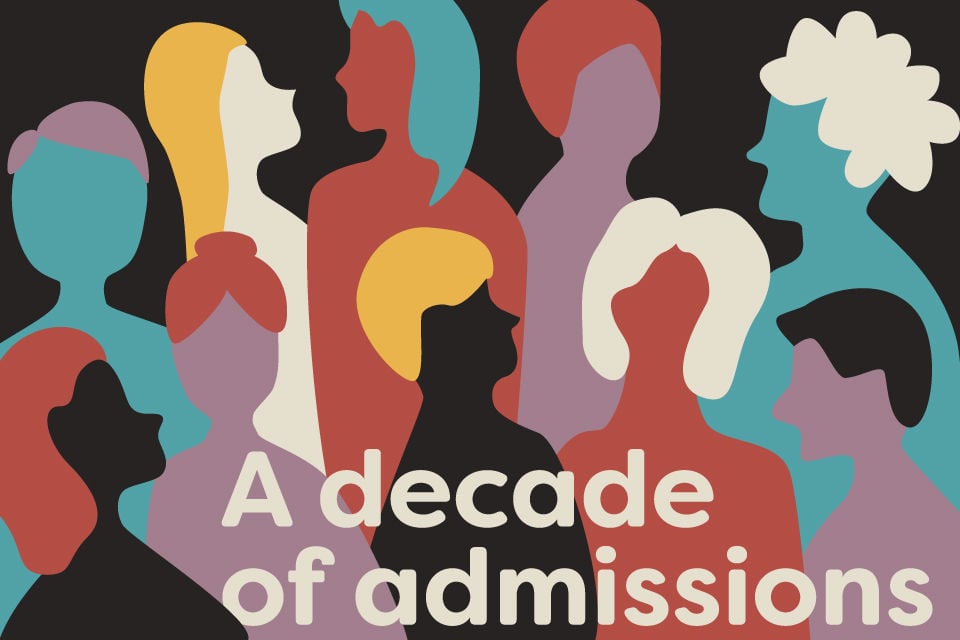 After analyzing 10 years of University of Georgia Undergraduate Admissions data, we found there has been minimal growth in minority applicants and a small increase of minority student enrollment. 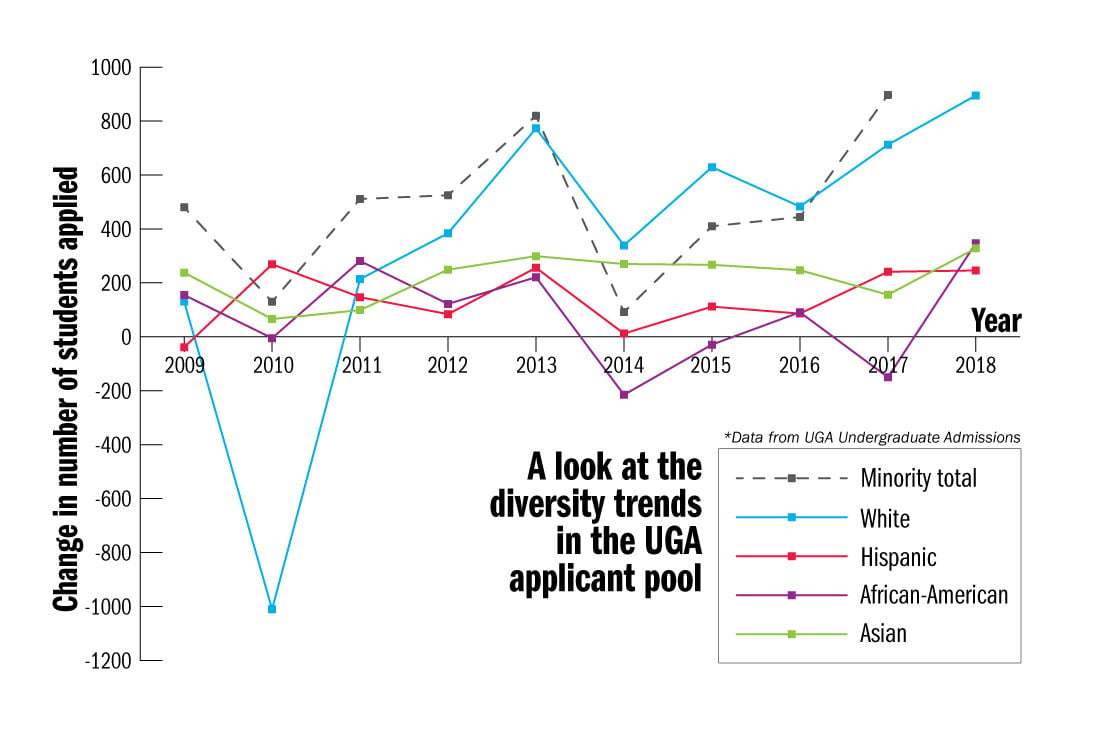 All data is from the University of Georgia Undergraduate Admissions. 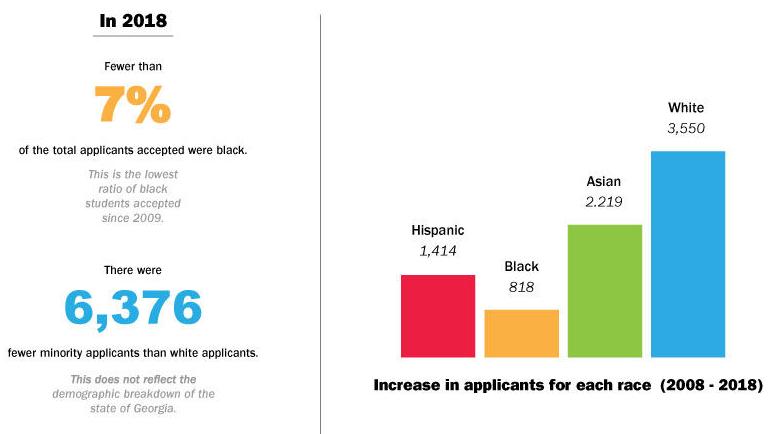 All data is from the University of Georgia Undergraduate Admissions.

Efforts to increase and retain a diverse student population never stop at the University of Georgia, but looking around predominately white classrooms, it’s hard to see tangible improvement.

“Are we where we want to be?” UGA President Jere Morehead said about diversity to his audience at the 2019 State of University address on Jan. 30. “No, not yet, but I believe we are making steady progress. This progress must continue if we want to realize our full potential as a public land-grant university.”

This progress has manifested in a 13 percentage point increase in minority student representation out of the total acceptance pool between 2008-2018. About a third of the 12,724 students accepted in 2018 were minorities, according to data from the UGA Undergraduate Admissions.

But these numbers do not reflect actual minority student enrollment, considering not all students who are accepted choose to attend.

Only a quarter of the undergraduate students in fall 2018 were minorities, according to the University System of Georgia, which was about a 7 percentage point growth since 2008.

UGA administration focuses some programs, such as Georgia Daze and Movimiento Latino, on decreasing this difference between accepted and enrolled minority students, looking at why students who were accepted into the university choose not to enroll and attend. But the divide between minority and white students starts earlier in the admissions process.

On average in past 10 years, there have been about 7,500 fewer minority students than white students who apply to UGA, according to undergraduate admissions data.

“I’m honestly happier that I didn’t get into UGA in high school and that I went to Georgia State because I really think that it burst the bubble that I lived in,” said Michael Bernardini, a white UGA junior transfer student from GSU, who appreciated being at a college with high diversity. “I think that the bubble would have remained intact had I stayed at UGA the whole time.”

A slow climb toward diversity

In 2000, UGA dropped its race-based admissions formula and moved toward a race-neutral admissions policy, which became permanent in 2006. By this standard, UGA does not have any quota systems in place to ensure diversity, meaning it cannot necessarily ensure diversity grows each year.

Even without this insurance, minority applicants have been on the rise over the past 10 years, moving from about 25 percent of the total applicant pool in 2008 to almost 40 percent in 2018.

Despite a more even ratio of white and minority applicants, the actual number of white students applying is still thousands more that of minorities.

These demographics of UGA’s applicant pool do not reflect that of the state. Georgia’s demographics are split around 50 percent between non-Hispanic white individuals and all minorities, according to data from the United States Census Bureau.

This discrepancy might be in part because of an increase in early action popularity.

Applicants for early action are increasing, hitting 17,000 in 2018, up 2,000 from last year. In the past four years, around 7,500 to 8,000 students are admitted through early action. This program is primarily focused on grades, SAT and ACT test scores, which are historically known for being racially biased, according to the National Education Association.

This uneven divide in minority and white applicants results in a domino effect on diversity at UGA.

Data from undergraduate admissions shows that the number of black students applying to UGA has increased by 818 from 2008-2018, but this rise has not been consistent.

While every other race shows a steady increase, save for an occasional outlier year, black applicants dipped in 2010, 2014, 2015 and 2017, the most out of any other race. Students identifying as Native American and Pacific Islander were not included in this calculation because of the low number of applicants, which totalled less than 50 for most years.

Though 2018 did see an increase in black applicants, fewer than 7 percent of the total number of accepted students were black, the lowest ratio it has been since 2009.

“There’s this stigma of UGA that it is literally just a predominantly white institution,” said Alexis Boss, vice president of UGA’s National Council of Negro Women. “Nobody outside UGA thinks that anybody besides white people go here.”

Because of this stigma, Boss said black students may choose to apply to Georgia State University instead, which has the highest enrollment rate for black students in the state.

Georgia State has the highest graduation rate of black students out of all nonprofit U.S. colleges, according to the Hechinger Report, an independent newsroom that covers inequality in education.

The Hechinger Report was published in 2016, and the following year, Georgia State was named one of the Top Performing Institutions for Black Students in the U.S by The Education Trust. That same year, UGA’s black application pool decreased by 150 people.

The percent of Asian and Hispanics students accepted out of the total amount of students has generally increased across this 10-year period, according to the undergraduate admissions data.

The percentage of Asian students accepted is consistently the highest out of any single minority group. In 2018, Asian students made up about 14 percent of all students.

“Nobody outside UGA thinks that anybody besides white people go here.”

Diversity initiatives on the rise

Morehead’s newest initiative to increase diversity is the New Approaches to Promote Diversity and Inclusion grant program, which started in fall 2017 and is now launching into its second phase, he announced at the 2019 State of the University.

The first phase of the program included 21 projects and a funding of $300,000, provided privately, to help with the “recruitment, retention and success of underrepresented and underserved current and prospective students at UGA,” according to the program’s proposals request.

The highest increase in all minority applicants over the past 10 years was seen in 2018, up more than 1,000 students from the year before, though it is unclear how this program may have directly affected the applicant pool.

Each of the programs focused on different aspects of recruitment and retention of minority students in high school, undergraduate and graduate levels of education and expanded across various colleges and subjects. Programs also provided workshops, educated prospective students on the application process and mentorship programs.

Though it is unknown how much will be spent on the second phase of the program, part of the money will fund some of the existing and successful projects from the program, while the other part will be dedicated toward new projects, Morehead said.

Problems in diversity span all categories of admissions — applicants, acceptance and enrollment. To curb UGA’s predominately white demographics, administrators are looking at all aspects of the admissions process.

How we got this story

This is the first in a series analyzing UGA admissions data. Please email ayoganathan@randb.com with any comments, concerns or tips.

The Red & Black obtained data from the University of Georgia Undergraduate Admissions for the number of students who applied and were accepted to UGA between 2008-2018. These numbers were broken down in race and ethnicity categories: white, nonwhite, black, Asian, Hispanic, Pacific Islander and Native American.

We analyzed the trends over this 10-year period by calculating the change in the number of applicants, the percent of applicants accepted out of each group each year and the percent of applicants accepted out of the total acceptance pool each year. Using these numbers, we did extensive research on demographics and external factors that may have caused peaks or dips in the applicant pool. Then, we compared these numbers to actual enrollment, which is available through data from University System of Georgia and the UGA fact books.

This story reflects what we found out about diversity in the admissions process at UGA.

Welcome back to The Red & Black's News & Brews, a weekly recap of Athens and Univers…

At the 2019 State of the University address, University of Georgia President Jere Morehead reflected on the school’s achievements over the past five years in areas including graduation rates and looked to plans, including an innovation district, for 2019 and beyond.

More than 2,000 UGA students, alumni search for jobs and internships at career fair

At the UGA spring career fair, companies dealing in elevator technology, to construction equipment, to selling cash registers made an appearance to provide thousands of students with job prospects.

Spanning from Sept. 15 to Oct. 15, Latinx Heritage Month encompasses the anniversaries of th…

Athens’ next generation: A closer look at the obstacles, opportunities for low-income children

It's the second episode of the year of The Red & Black's News & Brews, a weekly recap of Athens and University of Georgia news and a l…

Career outcomes for graduates of the University of Georgia are 11.7 percent higher than the national average. According to UGA Today, within six months of graduation, UGA graduates are either employed or attending graduate school at a rate of 96 percent for the second year in a row.

A look into the legal, racial debate continuing behind one UGA employee’s social media posts

More than one month after a viral video showing a verbal conflict between a philosophy teaching assistant and student was posted on Facebook, people are still waiting to see the outcome of the racial and legal implications of the employee’s speech.

UGA professor recognized with 2019 Dream Award for contributions to diversity

By the numbers: A look at a decade of diversity trends in UGA admissions

Has diversity increased over the past decade at the University of Georgia?

In 2018, the University of Georgia received the Higher Education Excellence in Diversity Award — again.

Even Gov. Brian Kemp called for an investigation of the DDS's discriminatory questions against Puerto Ricans. While the issue is certainly disheartening, it's not new.

In each of the articles in this series, The Red & Black will explore one background of students at the University of Georgia and speak with the people about their experiences. By reporting these stories, we hope to gauge a better understanding of the student body and its backgrounds.