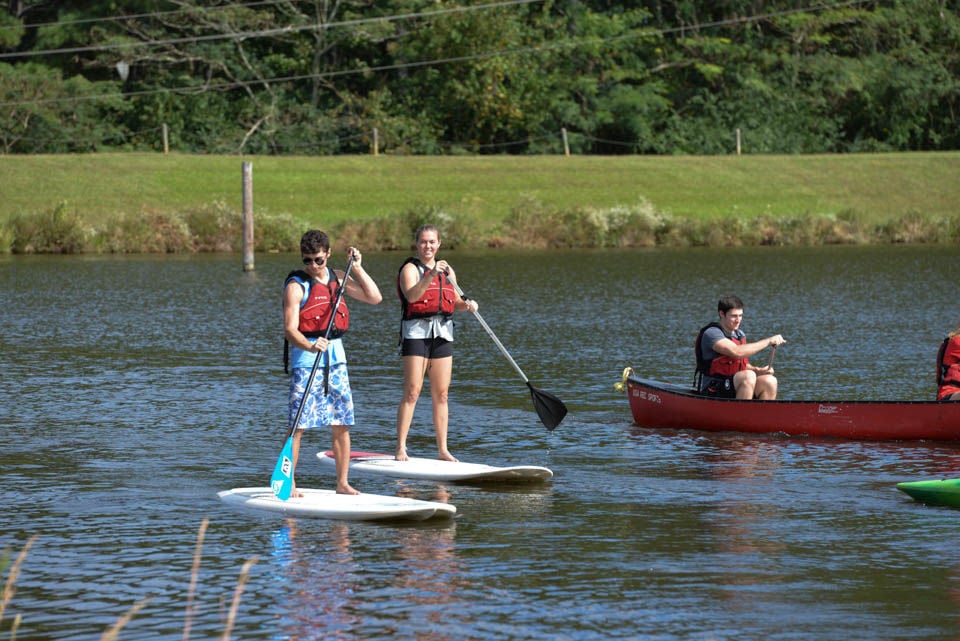 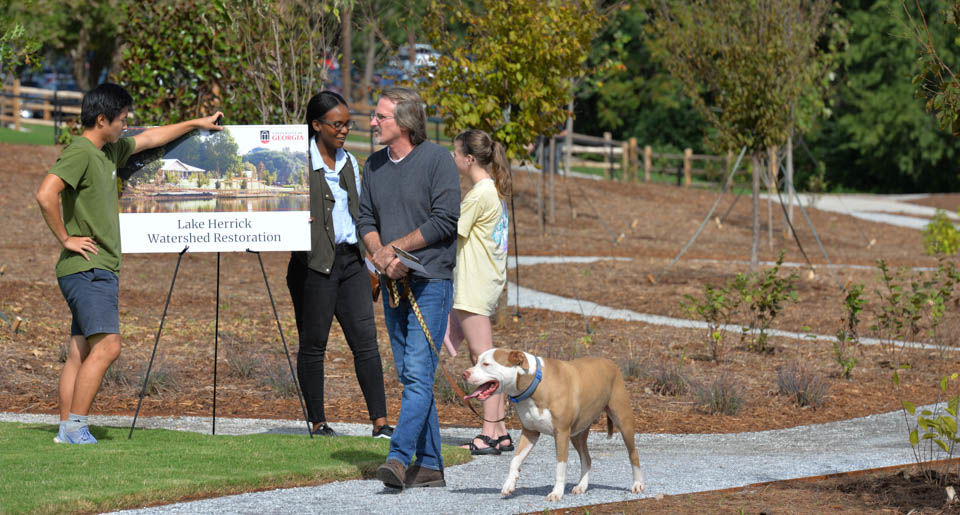 A man walks his dog through the newly renovated Lake Herrick waterfront after the dedication ceremony on Oct. 17, 2018 at the University of Georgia intramural fields complex in Athens, Georgia. Before this area closed in 2002 due to pollution, the waterfront was a sandy beach; the waterfront is now covered with paths and vegetation. (Photo/Julian Alexander) 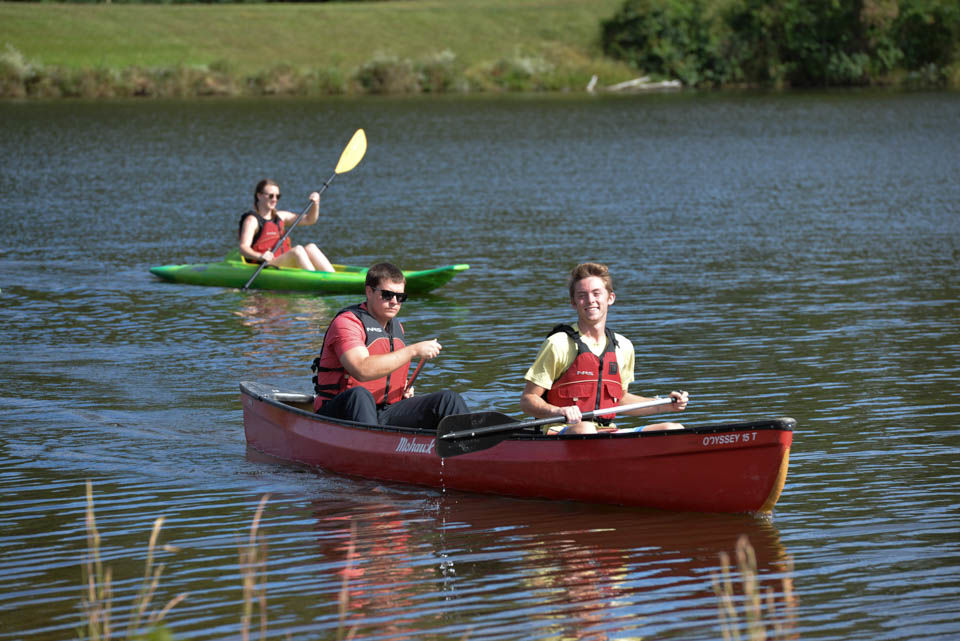 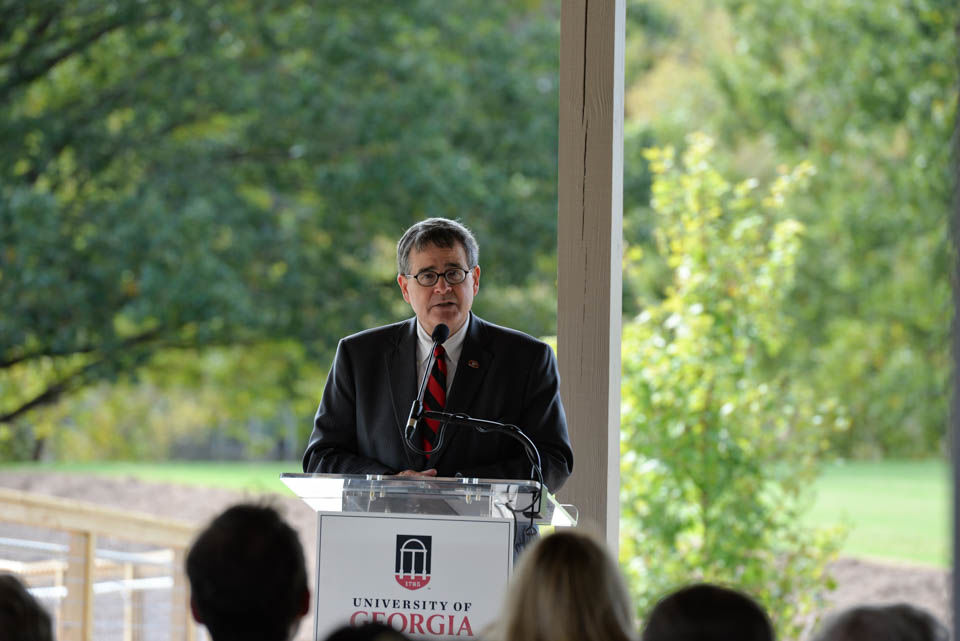 University of Georgia President Jere W. Morehead speaking at a dedication ceremony for the reopening of Lake Herrick in the UGA intramural fields complex in Athens, Georgia on Oct. 17, 2018. Lake Herrick has been closed due to pollution since 2002; the lake is now partially open to fishing and boating. (Photo/Julian Alexander)

After being partially closed to the public for 16 years, Lake Herrick, tucked behind the Intramural Fields on the University of Georgia’s campus, reopened for recreational activities on Oct. 17.

“I’m glad that it’s open to the public again,” said Galen Xiang, a senior ecology major from Atlanta. “It’s really cool to see that people are out here appreciating nature and taking the lake for what it is.”

“We’re here today to celebrate some of the most visible aspects of this project,” Morehead said to the audience. “But we know that much of what has been accomplished today — the rehabilitation of the upper pond, revised management policies, improved understanding of watershed ecology and more — may not be obvious to everyone here, but they’re equally important.”

Following the presentation, Morehead and other key project contributors cut a ribbon commemorating Lake Herrick’s reopening. A boat launch from the new dock, featuring students in kayaks and on paddleboards, floated behind.

Kayaking, paddleboarding and expanded biking and walking trails are three of the activities that will once again be permitted at the site.

Members of the UGA community can rent canoes, paddle boards and kayaks for use on Lake Herrick directly through the Ramsey Student Center, according to Atkinson.

Student ambassadors stood in locations around the lakeside to inform attendees of specific efforts and steps taken to revitalize the lake such as the removal of fecal contamination and other pollutants from the water and microbial source tracking, or tracking the source of microbes to fecal matter.

The initiative to revitalize the lake was primarily a collaboration between senior administration leaders, the Facilities Management Division, the Warnell School of Forestry and Natural Resources, Recreational Sports and other campus partners.

Donations from the Riverview Foundation and Georgia Power catalyzed and transformed the initiative into a project. University resources were used for the remainder of the funds needed, Morehead said. The project cost a total of about $1.3 million — $579,000 for Phase I and $740,000 for Phase II — according to UGA’s Office of University Architects.

In 2002, toxic algal blooms uncovered the man-made pollution held within the lake forced the university to close swimming and boating, according to the UGA’s Office of Sustainability website. Birdwatching and fishing were still permitted, but the lake managers stopped supplying the lake with fish, according to the River Basin Center’s 2014 Lake Herrick report.

An ad hoc restoration committee was comprised of faculty, staff, students and Athens-Clarke County community members formed in 2016 to create the master plan — a vision of the lake and its future. They developed a prioritized management system and subsequent phasing plan, Morehead said.

Lake Herrick continued to be a prime location for research and learning. Students and faculty utilized the lake, along with Oconee Forest Park, for lab research in natural and social sciences, primarily as UGA researchers studied its water quality issues.

“Classes from several local schools as well as schools and colleges on our campus use the natural setting for instruction,” Green said.

Thalika Saintil, a graduate crop and soil sciences major from Haiti, said the revitalization of Lake Herrick meant a lot to her because it was her first project at UGA. Saintil won a sustainability grant to work on some of the streams around the lake.

“I’m excited to see that it’s clean and that I was a part of this,” Saintil said.

The process to revitalize Lake Herrick was a two-step plan. The first phase focused on improving water quality within the watershed. In order to do so, the restoration committee planned the removal of more than 50 years of accumulated sediment, the creation of stormwater control measures and the replacement of invasive plants with native species, according to the UGA Office of Sustainability website.

The second phase involved improving the lake’s shoreline. The lakeside now includes a lawn, dock and expanded walking and running trails, along with native plants to protect the shoreline.

“For me, it’s the culmination of the efforts and time that the ecology community, the Warnell School of Forestry [and Natural Resources] and the sustainability schools have all put in these last couple of years in raising awareness and educating the student body about restoration, watershed ecology and a lot of other concepts that I’m really passionate about,” Xiang said.

Green also mentioned sustained efforts that need to be made to ensure the lake remains clean including keeping pets on a leash and cleaning up behind them to avoid pollutants, keeping bikes on bike trails to reduce sedimentation and picking up litter.

“The university remains committed to best practices for sustainability, research and community engagement that drove us to where we are today and will hopefully sustain this area into the future,” Morehead said.

Lake Herrick was commissioned to UGA in 1982 for recreational use. The lake was named for former dean of the School of Forest Resources, Allyn M. Herrick, who served the school for 23 years.

On the morning of Oct. 16, the pond at the Founders Memorial Garden was allegedly vandalized…

UGA professor studies how to communicate, educate children with Rett Syndrome after daughter is diagnosed

Mary Frances Early, the first African-American to graduate from the University of Georgia, n…

UPDATE: UGA's proposal to renovate Brumby Hall approved by Board of Regents

On the mend: Two years after accident, UGA graduate Agnes Kim takes it day by day

Agnes Kim is a 24-year-old University of Georgia graduate who loves Christian music, calls herself a “social butterfly” and wants to be an occ…

From student to reporter: UGA Alumna Maria Taylor speaks to students about her journey

While Maria Taylor can usually be seen as a reporter for ESPN or an advocate for her charity, The Winning Edge Leadership Academy, she spoke a…

Wallace “Wally” B. Eberhard’s desk was always covered in newspapers, books, magazines and papers to grade. When someone walked in, it was diff…

In the fourth episode of The Red & Black's News & Brews podcast, the news editors update you on what you missed in news this past week…

OPINION: Apply the broadness of a liberal arts education to hard sciences

Hard science classes, such as chemistry and physics, tend to only teach their subject and rarely discuss how the science interact with the world. By taking a broad approach to teaching science, the class is not only more memorable but interesting to non-STEM majors.