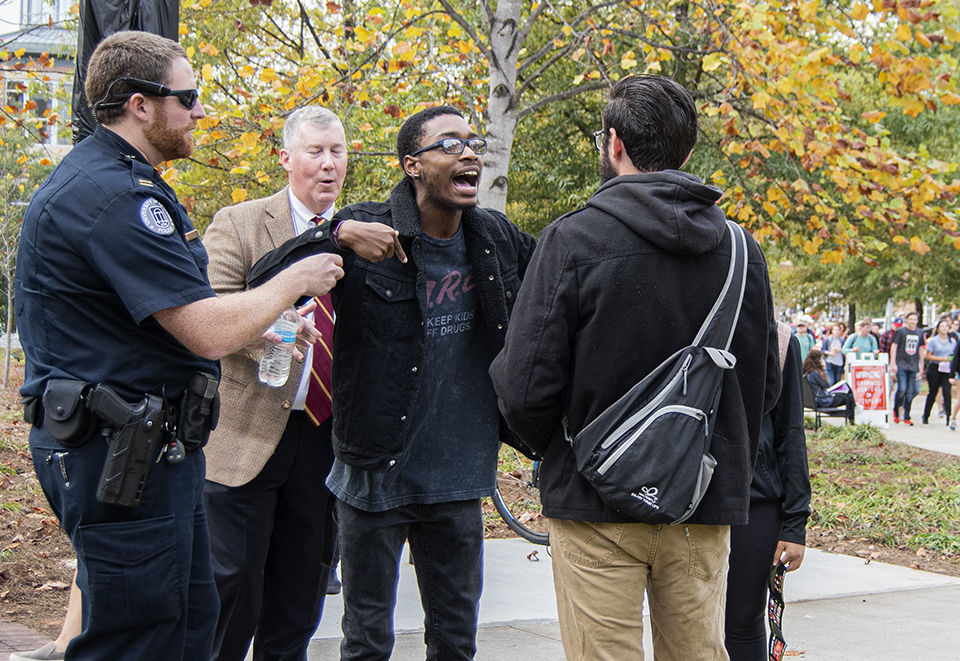 Two students engage in an argument broken up by one of the officers on the scene of the protest as UGA Dean of Students Bill McDonald looks on. Abortion-rights and anti-abortion activists stood outside of the Tate Student Center to promote their respective causes on Nov. 7, 2019, in Athens, Georgia. (Photo/Kathryn Skeean, kskeean@randb.com) 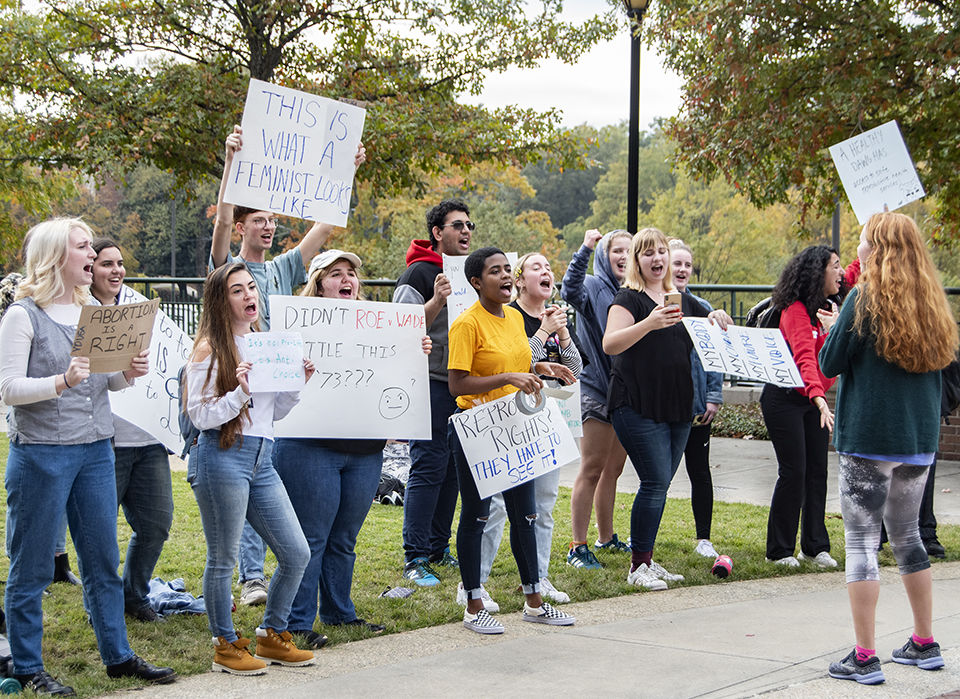 Pro-choice activists stand near the pro-life setup and chant in protest. Abortion-rights and anti-abortion activists groups stood outside of the Tate Student Center to promote their respective causes on Nov. 7, 2019, in Athens, Georgia. (Photo/Kathryn Skeean, kskeean@randb.com) 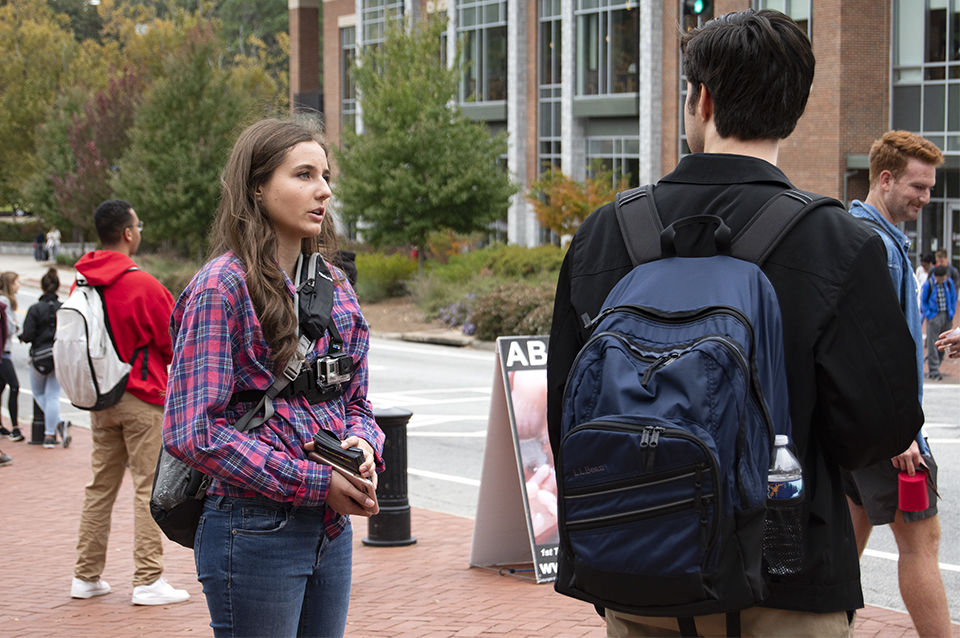 Lexie Hall, a pro-life activist, discusses the issue with a passerby. Abortion-rights and anti-abortion activists stood outside of the Tate Student Center to promote their respective causes on Nov. 7, 2019, in Athens, Georgia. (Photo/Kathryn Skeean, kskeean@randb.com) 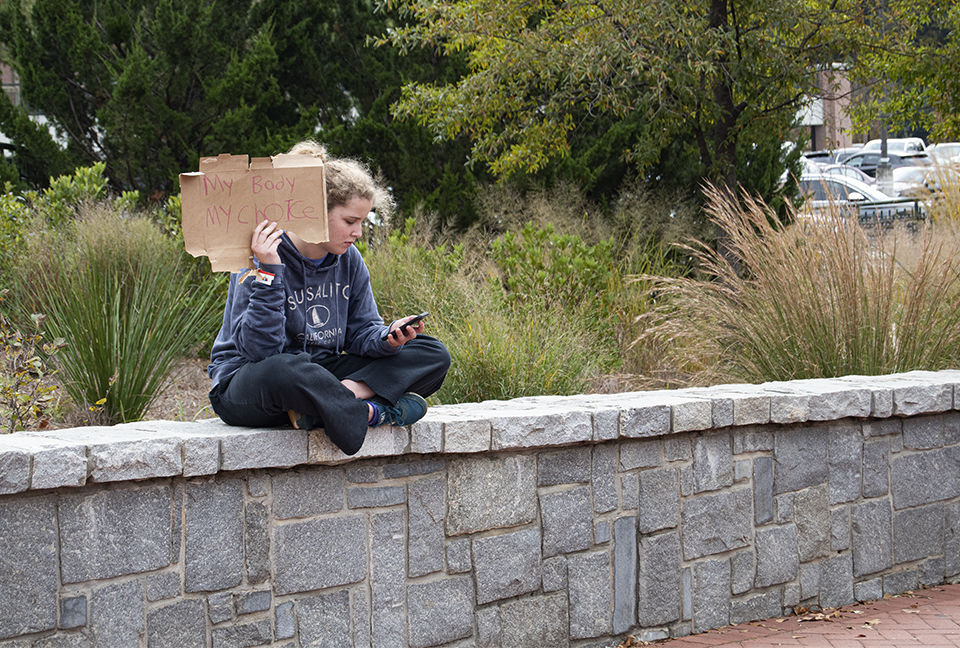 Caroline Anscombe sits holding a sign next to the pro-life activists. Abortion-rights and anti-abortion activists stood outside of the Tate Student Center to promote their respective causes on Nov. 7, 2019, in Athens, Georgia. (Photo/Kathryn Skeean, kskeean@randb.com)

Anti-abortion group Created Equal held a demonstration at the crosswalk across from Bolton Dining Hall on Nov. 7, displaying graphic images of abortion as part of a nationwide campaign “to engage students in conversation about this human injustice.” They were met with counter-protesters from a number of student organizations.

VIDEO: Activists use graphic images to protest abortion at UGA

“We’re a human rights organization, and we go to college campuses displaying graphic images of abortion,” said Lexie Hall, a member of Created Equal. “Abortion is disgusting, it is graphic, it is horrific, but we have to show what is happening to thousands of babies every single day.”

According to the Centers for Disease Control and Prevention, there were 638,169 legal induced abortions in 2015, the most recent year for which data is available.

Students were made uncomfortable by the graphic images on display at the Bolton crosswalk. Early in the day, freshman Caroline Anscombe sat with a cardboard sign that read “My body, my choice” to protest Created Equal’s display, generating some shouts of support from passersby.

“I think the way they’re doing this is not the way to convince people of what they believe,” Anscombe said. “I just want to make sure people know that there are people out there who love and respect them and their bodies.”

While Anscombe was the only counter-protester early in the demonstration, by 1 p.m. a larger protest of around 15 to 20 students had formed, including members from Young Democrats of UGA, Unite for Gender and Reproductive Equity and Young Democratic Socialists of America.

“We think it’s very traumatic to have images of aborted fetuses on campus and to be spewing hate and misinformation, especially across college campuses across the state because this is where the most rapes happen,” said Arianna Mbunwe, a member of URGE and social chair of YDUGA. “People just want to have the right to choose what they want to do with their body.”

Other students debated with members of the organization about the displays. Abby Phipps and Jinnie Lee, both juniors, were engaged in a conversation with a Created Equal member during the demonstration.

“I’m confused how this flies at UGA,” said Phipps. “They have warnings [about the graphic images], but if someone’s had an abortion or if this is a very traumatic thing for them, what are they going to do, walk all the way around to not see it?”

One issue that arose during the demonstration involved free speech and public forums. According to UGA’s Freedom of Expression Policy, UGA does not designate “University streets, sidewalks, and common areas as open, public forums.” UGA’s designated forums are the Georgia Quad, which is near the Zell B. Miller Learning Center and Tate Student Center, Tate Plaza and Memorial Plaza. Non-university affiliated speakers are not permitted access to the campus grounds for purposes of expressive activity, except in the designated forums, according to the policy.

UGA spokesperson Greg Trevor said in a statement that “no rights are more highly regarded at the University of Georgia than the First Amendment guarantees of freedom of speech, freedom of expression, and the right to assemble peaceably.”

Trevor said UGA worked with Created Equal to reserve the Northwest lawn for the demonstration “pursuant to the University’s Freedom of Expression Policy.”

“This morning, Created Equal began to demonstrate at an unauthorized location, and they were relocated to the area previously reserved for their demonstration, as required by the Freedom of Expression Policy,” Trevor said, adding that the counter-protestors also had the right to engage in their response to Created Equal.

There were differing opinions on whether the use of such graphic images was effective. Hall said Created Equal sought “to show [the graphic images] because this is what is actually taking place behind closed doors” and that they led to “very constructive conversations.”

“This isn’t free speech, this is hate speech,” Mbunwe said. “I am all for free speech on college campuses everywhere, but this is just hate speech.”

Created Equal is in the middle of a traveling tour of college campuses, high schools and abortion facilities in Texas, Michigan and Georgia.

At Georgia Tech and Georgia State, the organization utilized a large JumboTron to show graphic videos of abortions, according to Hall. Hall said that Created Equal was not allowed to have a JumboTron on UGA’s campus.

In 2017, a report concerning diversity and equity in Athens-Clarke County detailed multiple facets of inequality within Athens based on race. In 2019, the creation of an Inclusion Office was recommended in “a plan to make Athens-Clarke County a more welcoming and inclusive community.”

Flipped around: UGA students reflect on effectiveness of inverted classrooms

In a “flipped” or “inverted” classroom, students teach themselves the material outside of class time. In lieu of lecturing, the professor actively engages students with the material using practice problems, group worksheets or group discussions.

While academic research cited by the CTL found that flipping is an effective teaching style, some students are skeptical of the method.

The University of Georgia’s campus saw a different group of anti-abortion activists protest at Tate Plaza on Nov. 11. The Center for Bio-Ethic…

UGA students were split on whether the methods used by Created Equal and the Center for Bio-Ethical Reform were effective in supporting its cause.

Democratic US Senate candidates for 2020 speak in Athens

GUEST COLUMN: Jewish students speak out: abortion is not genocide

The controversial demonstration last week by the Center for Bio-Ethical Reform sparked heated debate on UGA's campus. However, the debate has largely failed to condemn the inappropriate comparisons of abortion to the Holocaust and genocide.

OPINION: Women are making breakthroughs in the film industry

“UGA spokesperson Greg Trevor said in a statement that “no rights are more highly regarded at the University of Georgia than the First Amendment guarantees of freedom of speech, freedom of expression, and the right to assemble peaceably.””

Would that be why the University at large has restricted the expression of those rights to 3 areas that comprise less than 1/700th the area of campus?