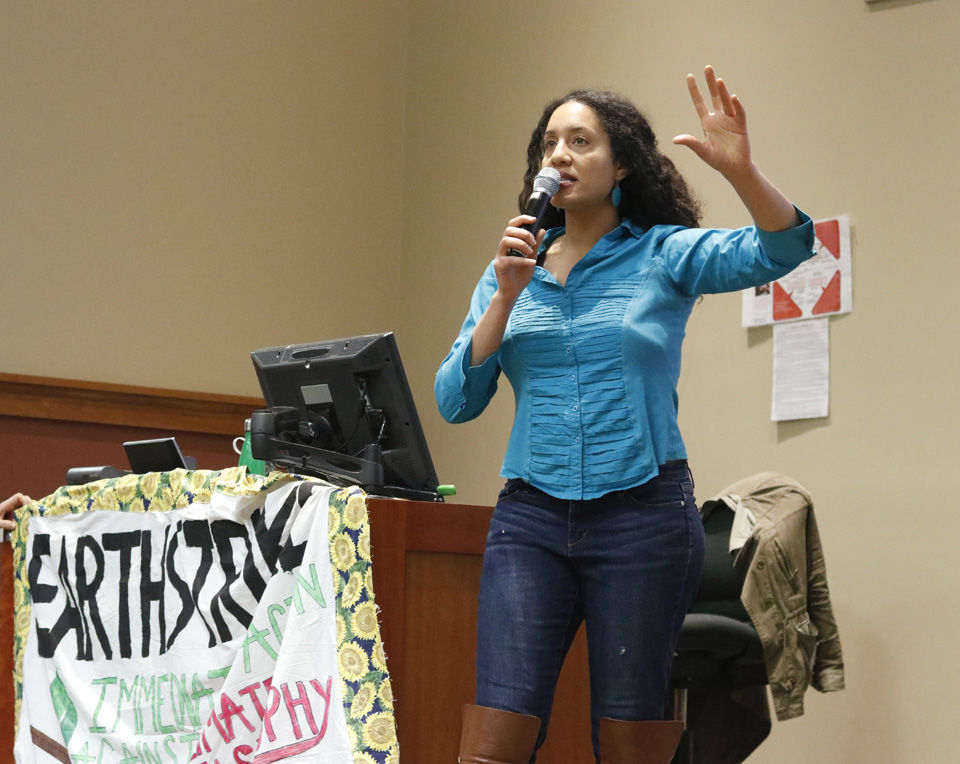 Nnenne Onyioha-Clayton, from 100% Athens, talks about the steps people can do in order to move towards renewable energy. 100% Athens is an organization trying to convert Athens to 100% renewable energy. Athens Earth Strike hosts a meeting with several enviromental organizations to discuss the dangers of climate change on Jan. 15, 2019 at the Miller Learning Center in Athens, Ga. Several speakers were present, including a Warnell School of Forestry and Natural Resources faculty member. (Photo/Daniela Rico) 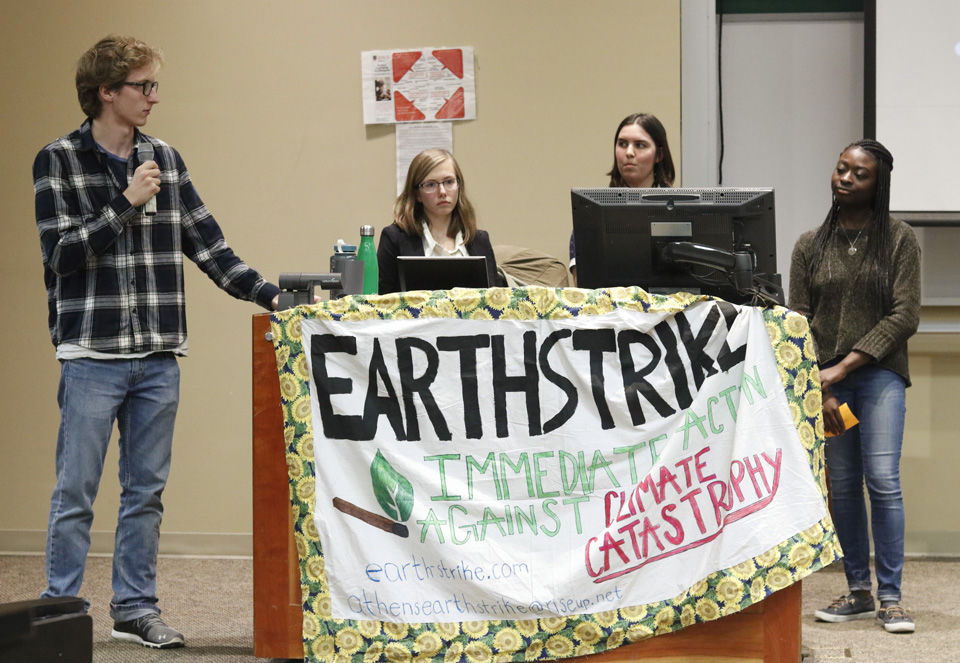 Athens Earth Strike hosts a meeting with several enviromental organizations to discuss the dangers of climate change on Jan. 15, 2019 at the Miller Learning Center in Athens, Ga. Several speakers were present, including a Warnell School of Forestry and Natural Resources faculty member. (Photo/Daniela Rico) 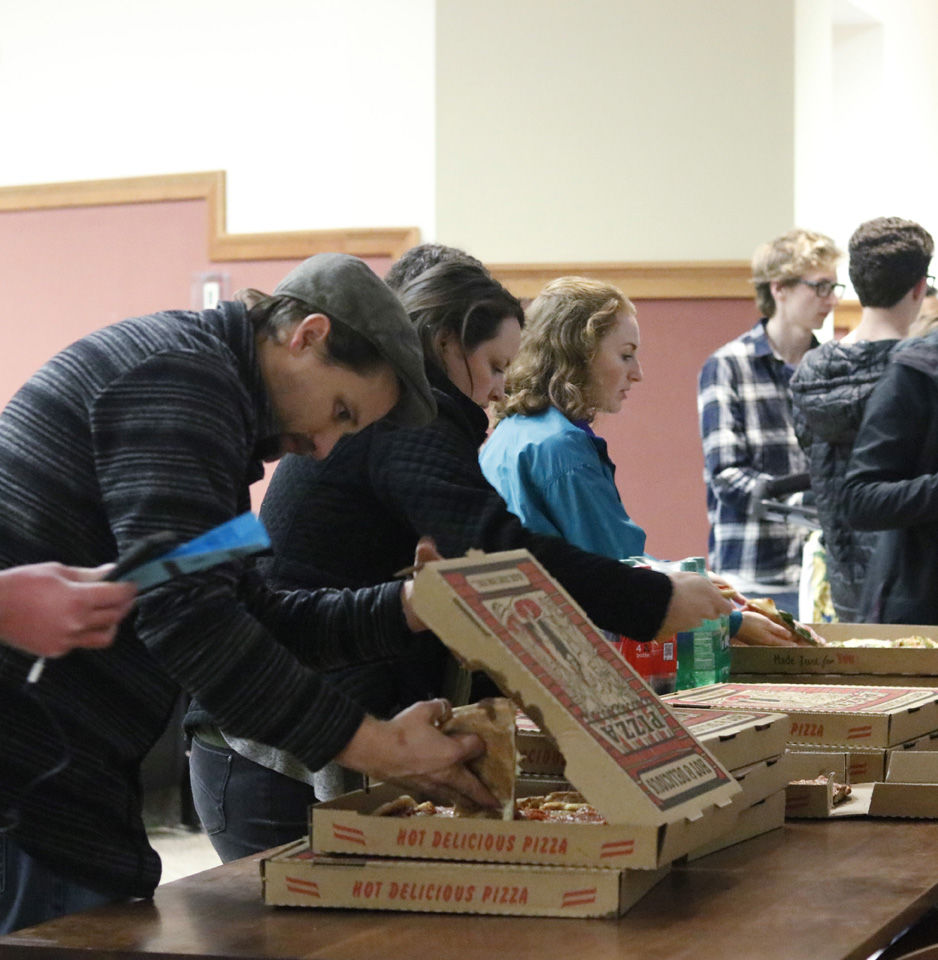 Athens Earth Strike hosts a meeting with several enviromental organizations to discuss the dangers of climate change on Jan. 15, 2019 at the Miller Learning Center in Athens, Ga. Several speakers were present, including a Warnell School of Forestry and Natural Resources faculty member. (Photo/Daniela Rico)

Tuesday’s Athens Earth Strike event at the Miller Learning Center was one of several held simultaneously around the world as environmental activists and University of Georgia faculty spoke about the need to address climate change.

Athens activists and UGA faculty spoke to an audience of about 70 UGA students and Athens residents at the Athens Earth Strike First Day of Action event on Jan. 15.

Members of the Athens Young Democratic Socialists of America work in the Athens Earth Strike chapter as a branch of the YDSA to promote environmental activism in the Athens community.

“This event is more geared toward the specific Clarke County community… and demonstrating to people that they have a voice, they have power,” said Athens Earth Strike member and Athens YDSA treasurer Valerie King.

King said the environmental group seeks to “hold our legislative body accountable” for the Earth’s changing climate. The activists announced their legislative demands to the audience.

The group said the State of Georgia should end subsidies for cotton and peanut farms due to the nitrous oxide and carbon emissions these crops produce, as well as fertilizer runoff, which hurts water quality such as that of the Oconee River in Athens.

“We have to think about equity… when you’re thinking about climate policies,” said Jesse Abrams, a professor of natural resource policy and sustainability in the Warnell School of Forestry and Natural Resources.

Abrams spoke about the data on climate change while displaying a slideshow that depicted charts of greenhouse gas emissions by country and economic relationships between GDP per capita and carbon emissions.

Nnenne Onyioha-Clayton and Cary Ritzler represented 100% Athens, a local environmental activist group. They spoke about their group’s efforts to promote a transition to “clean, renewable energy” in Athens by 2035.

“We are a grassroots effort... that came together around this [issue] since the United States pulled out of the Paris Climate Accord,” Ritzler said.

Clayton and Ritzler said the Athens transition to renewable energy would be funded by SPLOST. They said Athens could follow cities such as Atlanta and Clarkston, an Atlanta suburb, in their efforts to transition to solely renewable energy by 2035. Solar power would operate as the primary energy source for the community.

Sauer discussed the CCL’s legislative initiative, the “Energy Innovation and Carbon Dividend Act,” in which a “carbon fee” assessed on companies would lead to an increase in fuel prices, therefore driving down demand for fossil fuels and increasing demand for renewable fuel sources.

“I just want to get more informed… because I do think I want to do something in the sustainability field as a career,” Akins said.

Akins said she supported the CCL’s carbon fee because it would provide motivation with people to switch to renewable forms of energy without losing money.

Athens Earth Strike has planned a protest to build ties with local unions on April 27 at the Arch on UGA’s North Campus. This follow-up event as well as another protest on Aug. 1 will proceed the “general strike” on Sept. 27, when organizers said supporters will attend a march in Atlanta rather than going to work.

As 2019 gets underway, take a look back at the major events at the University of Georgia in 2018. From the election of a new Student Government Association administration to the rise and fall of a grilled cheese empire, here's a month-by-month breakdown of 2018's top events.

UGA Gamers unite! The Tate Gameroom opens to the public

On Tuesday, Jan. 8 at 1:15 p.m., the Tate Student Center unveiled a new gaming center, located in the space previously occupied by Dawg Snacks across from the Tate Theater. Students and employees alike gathered in the gameroom, reminiscing on carefree memories of their childhood.

The dress code for the protest near the Arch on Feb. 5 was all white except for a bloodstain on the crotch of the protesters’ pants.

After participating in a protest of a restrictive abortion bill known as the “Heartbeat Bill” at Tate Plaza, some members of the Young Democra…

OPINION: A carbon tax is a bipartisan solution to address climate change

The climate protests on Sept. 20 gathered at the Arch to speak out against the growing threat from climate change. Georgia can take a step toward fighting climate change and reducing our carbon emissions by passing a carbon tax.

The health of the environment is a crucial issue for the future of the country, but myths threaten to derail efforts to solve the problem.

Thank you for the excellent article and for covering this important event. Concerning the Energy Innovation and Carbon Dividend Act, I would like to add that the all revenue raised from the carbon fee is returned to American citizens in the form of a monthly dividend. This will protect the bottom two thirds of fossil fuel consumers from any increase in energy cost. If people would like to know more about this bipartisan climate change fighting bill they can go to energyinnovationact.org where they will find explanations, all the bill's cosponsors, and the full text of the bill.