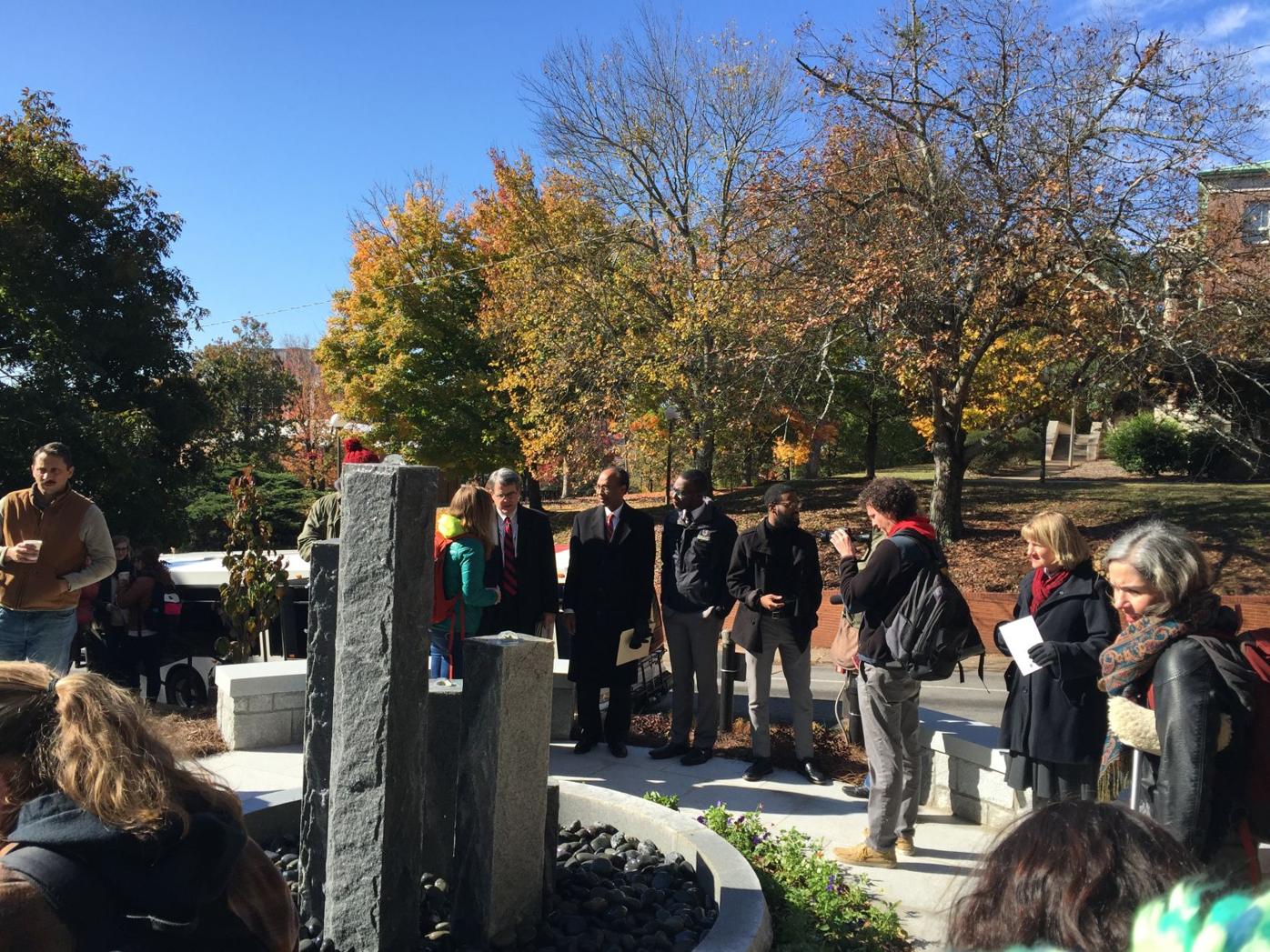 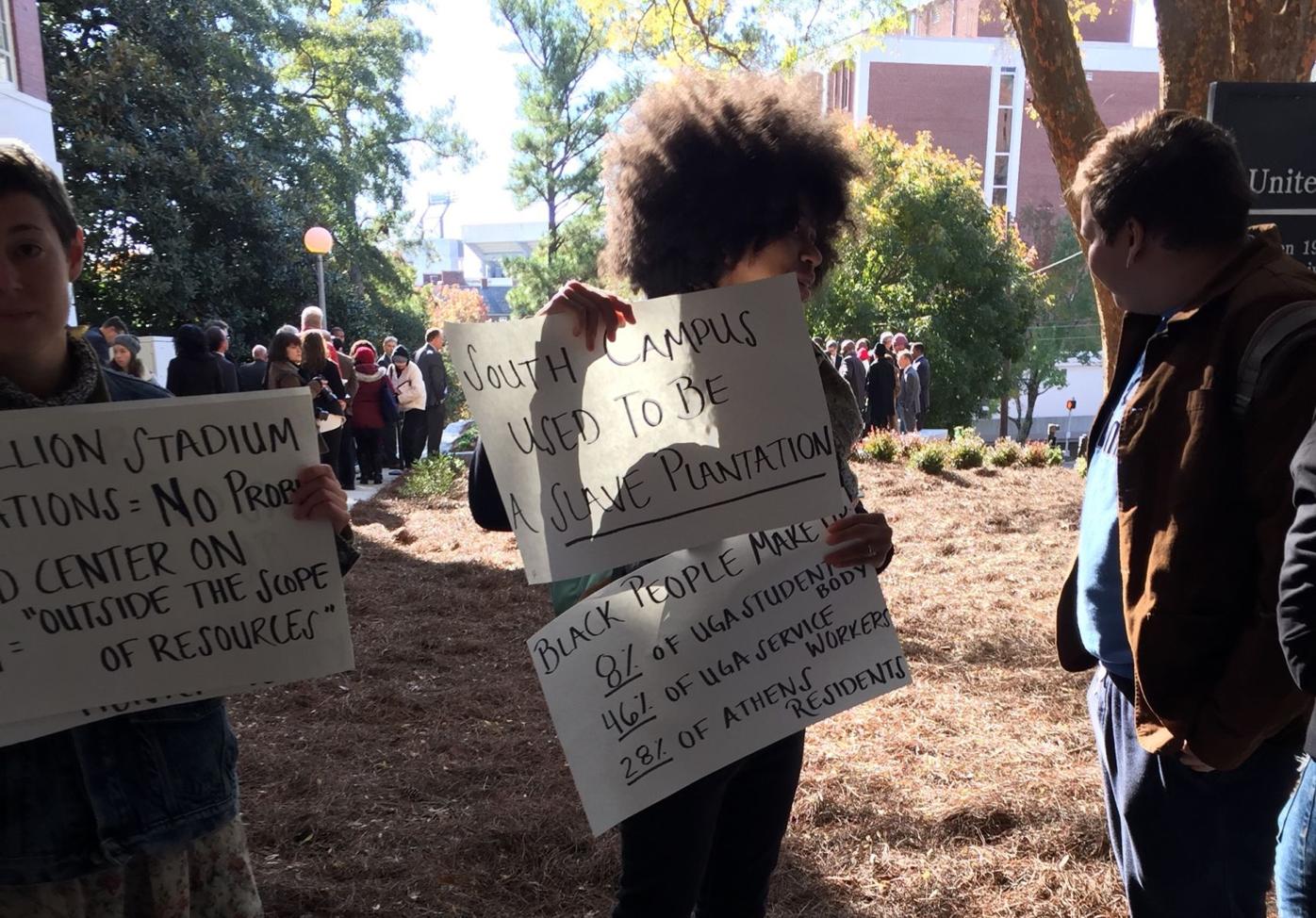 Three years after the human remains of individuals, believed to have been slaves, were found during construction at Baldwin Hall, a small group protested a memorial dedication outside of Baldwin Hall for the deceased individuals on the morning of Nov. 16.

The protesters called for a public acknowledgement from the University of Georgia of its prior ties to slavery.

“When will the University of Georgia publicly acknowledge the history of slavery? When will the university issue an apology?,” a protester said to UGA President Jere W. Morehead while walking up to the podium at the conclusion of his speech.

Morehead continued to speak in front of a crowd of around 100 people, ignoring the protester.

“I want to thank everyone in attendance today for taking part in this special dedication at the university and in the Athens community,” Morehead said over the protester. ‘We will remember, celebrate and honor the individuals who were originally buried here.”

When Morehead concluded and walked away from the podium, the protester continued speaking.

During construction at Baldwin Hall in 2015, 105 unmarked human grave sites were found underneath the building and were transferred to Oconee Hill Cemetery in March 2017. In May 2018, plans were announced to create a memorial to honor the deceased.

The completed memorial was unveiled on Nov. 16 with speeches by Morehead, U.S. District Court Judge for the Northern District of Georgia Steve Jones and Vice Provost for Diversity and Inclusion and Strategic University Initiatives Michelle Cook.

Jones and Cook were part of an 18-person “advisory task force” consisting of university representatives and community members appointed by Morehead to design the memorial.

“This project has been particularly important to me because of my own family history here in the Athens area — my history which dates back more than 150 years,” said Cook, who chaired the task force and whose ancestors were born into slavery and lived in Athens.

Cook then led the crowd in a moment of silence, and the event concluded as people walked over to observe the memorial.

The protesters soon joined the waning crowd at the memorial after the speeches.

“The university needs to acknowledge its role in slavery and the ways it continues to uphold white supremacy by not acknowledging that history or making amends for it,” Parker said. “This gesture, while nice, is not enough. It’s not going to bring justice to the descendants of the folks who are buried here.”

Zaria Hampton, a fifth year financial planning major from Sugarhill, was another one of the protesters.

“We knew that we had to come here and make some things clear — that slaves built this university, those bodies were slaves, their descendants haven’t had any type of reparation, there’s no scholarships for their descendants,” Hampton said.

Throughout the three speeches, neither Morehead, Jones nor Cook mentioned the bodies were believed to have been slaves, a fact noticed by Hampton.

“We were thinking maybe they would say, ‘These bodies were slaves, and this is something to remember them,’” Hampton said.

The granite marker at the memorial does, however, say, “The vast majority of the remains identified were those of men, women and children of African descent, most likely slaves or former slaves … The University of Georgia recognizes the contributions of these and other enslaved individuals and honors their legacy.”

About one hour after the conclusion of the dedication, Morehead issued a statement through an email on ArchNews with the subject line: “UGA Policies: Ensuring a Fair and Respectful Environment.”

The email, addressed to all faculty, staff and students, said UGA is “committed to ensuring a fair and respectful environment that promotes the safety and dignity of all members of the UGA Community.”

Morehead, in the email, said expressions of hate or hostility based on legally protected categories are prohibited and can include spoken or written language and use or display of images or symbols.

Kathryn Veale, an academic adviser in UGA’s School of Public and International affairs, said “there needs to be a marriage between” the speeches at the dedication and the protesters.

“I think you need to obviously acknowledge the history and so this is a good step, but we also need to understand the implications of the past and current socio-economic problems,” Veale said.

University of Georgia officials have revealed their plans for the Baldwin Hall memorial, des…

The controversial history of Baldwin Hall and Old Athens Cemetery

Since the discovery of 105 gravesites under Baldwin Hall in November 2015, questions have been raised as to why the building was constructed on African American graves at Jackson Street Cemetery, also known as Old Athens Cemetery, in 1938.

The University of Georgia is continuing to conduct research on the 105 gravesites found under Baldwin Hall in November 2015. According to a UGA Today press release, information about these bodies, said to have been remnants from the mid-1800’s, will be officially documented and accessible by Athens residents within the coming year.

Because the College of Engineering at the University of Georgia was founded in 2012, clubs affiliated with the college are relatively new. One…

In an effort to educate community members about local flowers, crops and pollinators, one of the public service outreach interns at the State …

The turkey is synonymous with Thanksgiving as is the Hairy Dawg with the University of Georgia. Just as some residences in Athens-Clarke Count…

University of Georgia faculty, graduate and undergraduate students within the department of history spent the last few months in the Richard B…

Athens residents, UGA students and UGA faculty packed the historic Morton Theatre for the premiere for the film “Below Baldwin,” a documentary about the remains the university claims to have discovered during the 2015 expansion project of Baldwin Hall.

The history behind the names of some buildings on the University of Georgia’s campus has come to light due to the national and local cry for racial justice. The Red & Black compiled five buildings and colleges on the Athens campus that are controversial due to either their namesake or for the history behind them.