During the University of Georgia’s Freshman College Summer Experience, Hayliegh Rose was one of eight Black students in a group of about 300.

She felt isolated and concerned that she wouldn’t have others to relate to on the predominately white campus. Her Freshman College experience was even less diverse than UGA’s student body, which is about 8% Black and 67% white, according to fall 2019 enrollment statistics. By comparison, Georgia’s population is 33% Black, according to 2019 U.S. Census Bureau estimates.

As part of UGA’s Student Government Association, Rose met Joshua Patton. They realized Black clubs on campus lacked cohesion and often planned events or meetings on the same days. With the vision of unifying Black organizations and forming a bridge between administration and Black students, the Black Student Union was formed in June.

Rose emphasized that the role of BSU is not to override Black organizations but to assist them in unifying their goals and voices. Patton said BSU will host monthly meetings about initiatives and what they’d like to see from UGA’s administration. BSU plans to reach the student body through town halls where students can speak on their concerns and needs.

“The town halls are for us to understand what Black students need, but non-Black students can also attend for them to learn about Black experiences and how to be allies,” Patton said.

Rose said when members of the Black community suffer, she’d like to see more unity so the community can work to heal together. Unity is key in Patton’s vision for BSU — he said although Black students may vary in interests, beliefs and backgrounds, they must remain united.

“I want to see unity over conformity. You don’t have to fit a mold,” Patton said. “We’re related by skin color and want to be unified in that manner.”

Camille Jones expected a unified Black student organization like BSU before she got to UGA. Jones is the president of Georgia Daze, which aims to recruit Black students to UGA. She said she hopes to find collaboration from BSU because they can get more done if they work together.

The new union can help spread messages easier than single organizations can, Jones said. The UGA chapter of NAACP started Arch Accountability, its first initiative in collaboration with BSU, on June 19. It focuses on UGA’s relationship with its Black students. Jones said without BSU, only UGA NAACP would have shared the initiative and fewer people would’ve seen it.

Arch Accountability challenges the UGA community to uphold the values represented by the three pillars of the Arch: wisdom, justice and moderation.

The effort demands the addition of students, especially Black students, to the USG committee reviewing the names of buildings named after racist figures. UGA NAACP also demands the university recruit Athens high school students to UGA “with scholarships for the descendants of the enslaved Black Americans who built the school,” according to the Arch Accountability statement.

The effort also calls for a mandatory UGA course about the history of systemic racism. UGA must create a special committee to acknowledge the university’s current and previous history with slavery, the statement demands. 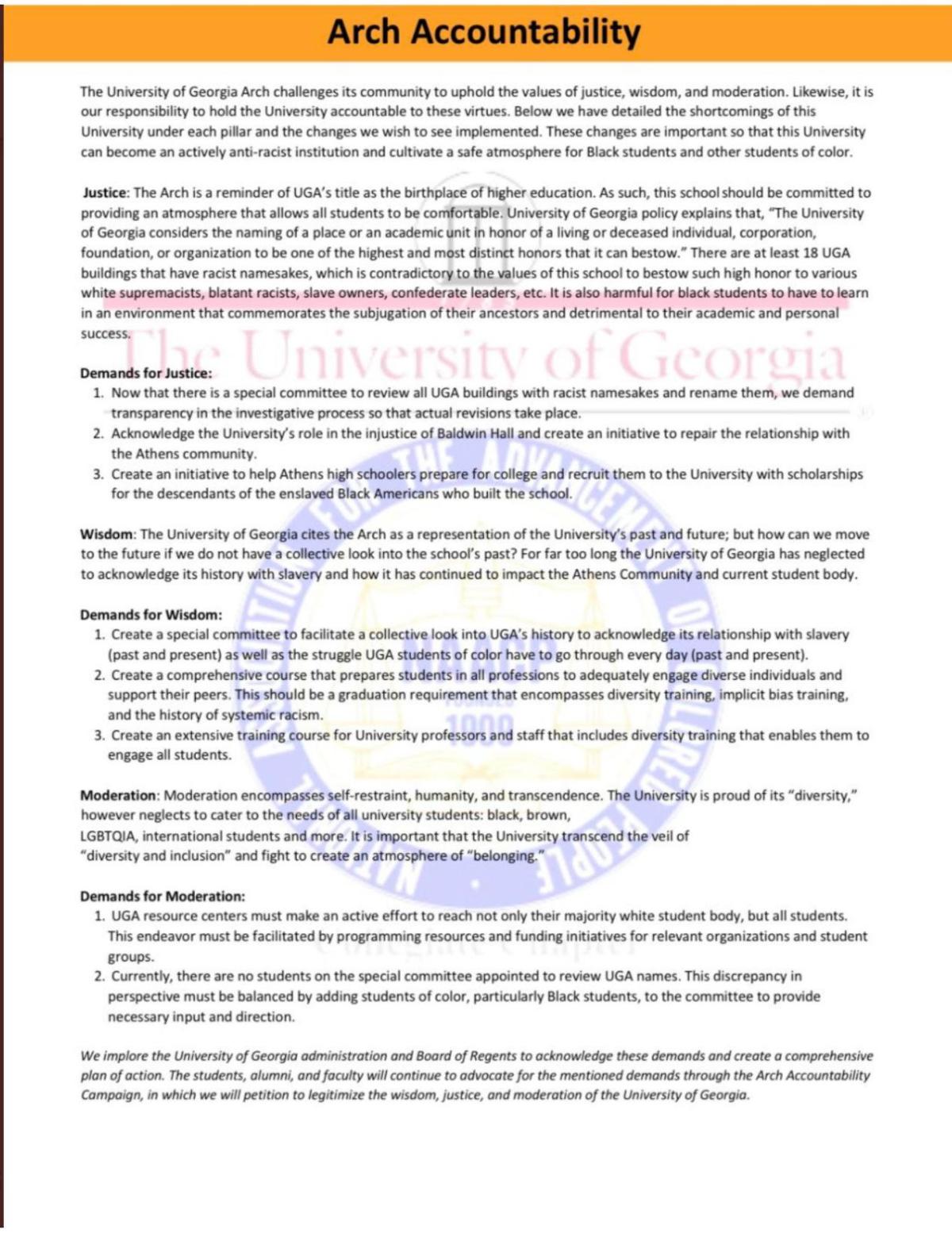 As BSU and UGA NAACP work together toward a unified goal, so do other Black organizations. Abeneefoo Kuo Honor Society’s president Adanze Nnyagu said in light of recent racial social movements and events, the unification of Black organizations is needed now more than ever.

If there is an issue or justice needed for Black students, organizations can join together and reach a solution — no one has to handle it alone anymore, Nnyagu said.

“Now we can recognize things in a system that targets races [and] ethnicities and work to change that,” Nnyagu said. “Black and minority groups can better coordinate different programs, grow together and properly address issues.”

Abeneefoo Kuo, which means “circle of honor” in Swahili, focuses on providing leadership and academic support for Black students and the Athens community.

“BTE produces stories and representation in theater where otherwise students may not see people that look like them on the stage,” McCamy said.

McCamy said this fall semester will feel different from the rest. She said Black students are speaking out against and healing from racism and microaggressions throughout their college career. Now more than ever, they need to be there for one another.

As BSU, NAACP and other Black organizations prepare their initiatives and goals for next semester, Rose said she hopes the university will become reactive and not silent on issues within the Black community.

On May 31, UGA released a message from President Jere Morehead regarding racial inequality. The message garnered criticism from many in the UGA community because Morehead didn’t specifically mention racism or those who were killed. The next day Morehead released a second statement.

“To our black students, faculty, staff, and alumni, I want you to know that I stand with you,” Morehead said in his second statement. “I know we don’t always get it right, and mistakes are made.”

Rose said she was one of many students who were disappointed with the university’s original response. Although she believes Black students must stick together and support one another, she also said students need acknowledgement and action from the university.

UGA NAACP President Alex English said he’s “cautiously optimistic” that UGA will do something in light of the protests and requests for change from Black students. People have protested in every state since George Floyd’s killing, and they are ready to talk, he said.

He said he understands UGA is handling a lot right now, but he wants action.

“I get it. There’s money at stake, a lot of stuff that’s above my pay grade. Got it,” English said. “But it’s also a matter of human rights. I mean, come on, these are human beings. These are conversations that need to be had, and now that we are having them, let’s act upon them.”

Students across the University of Georgia are calling for changes within the university and Athens communities to promote racial justice through tangible programs.

Black students at UGA reflect on their concerns about fall semester

After a summer of Black Lives Matter rallies, calls to defund the police and unsatisfying responses from the University of Georgia, Langston Leake said he was nervous to return to a campus where he sometimes did not feel welcome, as a Black student.

Being Black in the ‘ivory tower’: UGA faculty members share experiences in academia

Black professors at the University of Georgia reflect on their experiences in academia, where Black and African American people are underrepresented, as both students and faculty members.