The faculty senates of the University of Georgia’s Franklin College of Arts and Sciences and Mary Frances Early College of Education submitted a resolution to UGA administration reflecting their concerns about returning to school amid COVID-19.

In a July 28 letter, the presidents of the faculty senates from both colleges addressed University System of Georgia Chancellor Steve Wrigley and UGA President Jere Morehead about the resolution, which was unanimously adopted at a special called session of the Franklin College faculty senate on July 27. 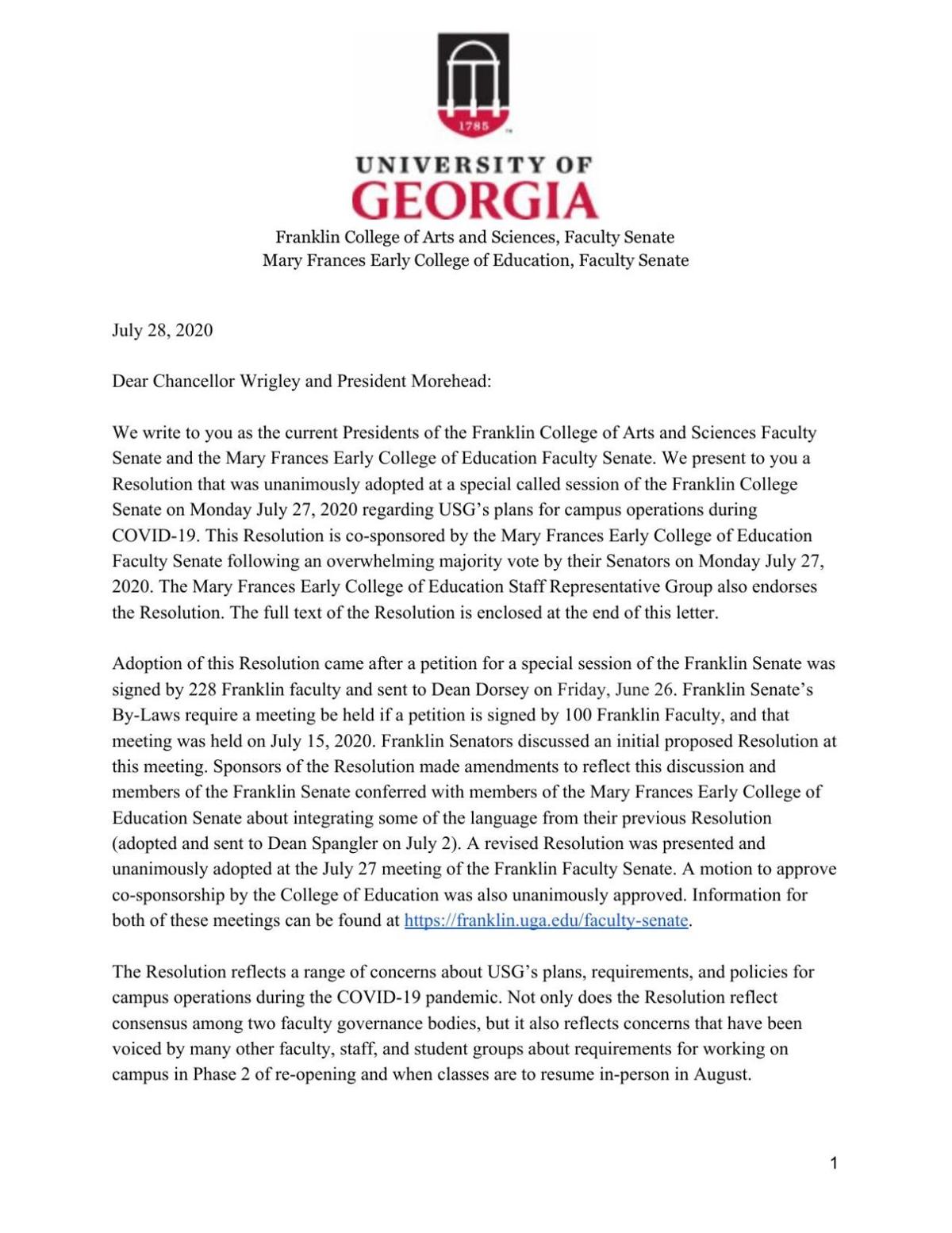 A special University Council meeting has been called in response to the letter. The meeting will be Aug. 12 at 3:30 p.m. Morehead and Wrigley both posted responses to the resolution on the Franklin website.

The resolution from the two colleges begins with a commendation to USG for its decision to require masks on campus.

However, the resolution emphasizes that no staff, student or faculty member should be compelled to learn, teach or work face-to-face this fall as many UGA employees “will face unresolvable issues of child care and other domestic responsibilities generated by the pandemic.”

“It is unclear to me where either college-level senate derives the authority to demand changes to University-wide policy and operations or to dictate actions that apply to the entire University System of Georgia.”

The letter says there must be no penalty for requesting online-only engagement, including supervisor evaluations for faculty and staff and attendance grades for students. Faculty should not have to provide medical documentation for requesting to move their class online, and no faculty or staff members should be fired, furloughed or laid off if they have a job that cannot be done remotely.

The resolution demands that policies regarding face-to-face instruction must protect all members of the instructional faculty equally, including graduate students, who often serve as teaching assistants. It also says no policies should be instituted that enable lower-status instructors to take on more risk, such as quotas for face-to-face contact hours.

The resolution also describes the plan for testing 300 asymptomatic people per day during the fall semester as “clearly inadequate.” The resolution states COVID-19 on campus “will most likely seeded in the first few days and weeks when only a small fraction of the community will have been tested.”

There is not enough testing occurring and UGA’s plan for contact tracing relies too heavily on the Georgia Department of Public Health, according to the resolution.

According to the resolution, the colleges demand that USG and UGA provide clear and accurate reports about positive test results to the entire campus community, including results obtained during the summer. The reports must include details such as the infected person’s job category, where they work, and in the case of an infected student, the name of their dorm in order to assist community members in planning for their own health and safety.

Guidelines and information for triggering the closure of campus due to the spread of COVID-19 must be formulated and disseminated at the earliest opportunity and all future decision making should include “substantive representation and participation” from faculty, staff and students. The resolution demands that every existing UGA COVID-19 planning committee must expand to include three additional members chosen by groups of students, faculty and staff.

The resolution also calls for an immediate series of open town halls which will permit all members of the community to speak without the “fear of reprisal” about their concerns about campus life during the continuing pandemic. “Democratic reform” of UGA’s governance is “long overdue,” according to the letter.

“It is deeply regrettable that the UGA and USG administrations have brought us so close to the opening of the Fall semester without a clear community understanding of the issues above,” the letter says. “These issues by no means exhaust the list of unanswered concerns, many of them literal matters of life and death, held by staff, students, and faculty.”

Both Morehead and Wrigley responded to the resolution on Aug. 4.

Morehead addressed the deans of Franklin and Early Colleges in a letter in which he defends USG and UGA’s plans of reopening campus with the nine working groups, and said the plans were shared with the UGA and Athens communities. He said the administration didn’t receive any feedback from Franklin and Early Colleges until July 28, over a month after the original reopening plans were released.

In the letter, Morehead also described the claims regarding the University Council’s failures of governance as “unsubstantiated and inappropriate.”

“It is unclear to me where either college-level senate derives the authority to demand changes to University-wide policy and operations or to dictate actions that apply to the entire University System of Georgia,” Morehead wrote.

UGA has invested $1.2 million for the surveillance testing plan. Toward the end of the letter, Morehead provided a list of safety measures as “the health and safety of the University community is, and will remain the top priority.”

Wrigley provided a shorter response, emphasizing that USG has followed the advice of the DPH and Centers for Disease Control and Prevention on how to act with COVID-19. Wrigley also said that USG is in consistent contact with DPH and has pursued a range of strategies to reduce risk, as they recognize they cannot eliminate it on campus.

At the end of the letter, Wrigley said USG takes their responsibility during this time very seriously and will continue to monitor with the CDC and DPH.

University of Georgia students, faculty and staff will stage a die-in protest on UGA’s North Campus on Thursday at noon. The protest is hosted by the United Campus Workers of Georgia.

As the beginning of the fall semester draws nearer, members of the University of Georgia’s administration discussed questions submitted by students, faculty members, staff and parents about UGA’s reopening plan in a public Zoom meeting.

ACC Coroner: UGA employee death was due to COVID-19; no confirmation from UGA

University of Georgia housing employee Ana Cabrera died of COVID-19, according to the Athens-Clarke County coroner.

Starting on Monday, the University of Georgia began its Phase 3 reopening plan. All faculty and staff members can return to campus unless approved for telework.

University of Georgia alumnus Matt Osajima created a website that emails UGA administration with concerns about its COVID-19 reopening plans.

As the University of Georgia plans for the first day of class in one week, faculty members and university administration are engaged in a back-and-forth debate over certain aspects of the COVID-19 reopening plan.

GUEST COLUMN: Petition from more than 300 tenured and nontenured faculty of UGA

Over 300 tenured professors from UGA signed this petition, which outlines their concerns over returning to in-person instruction based on extensive research, evidential data and the experiences of other peer universities across the nation.