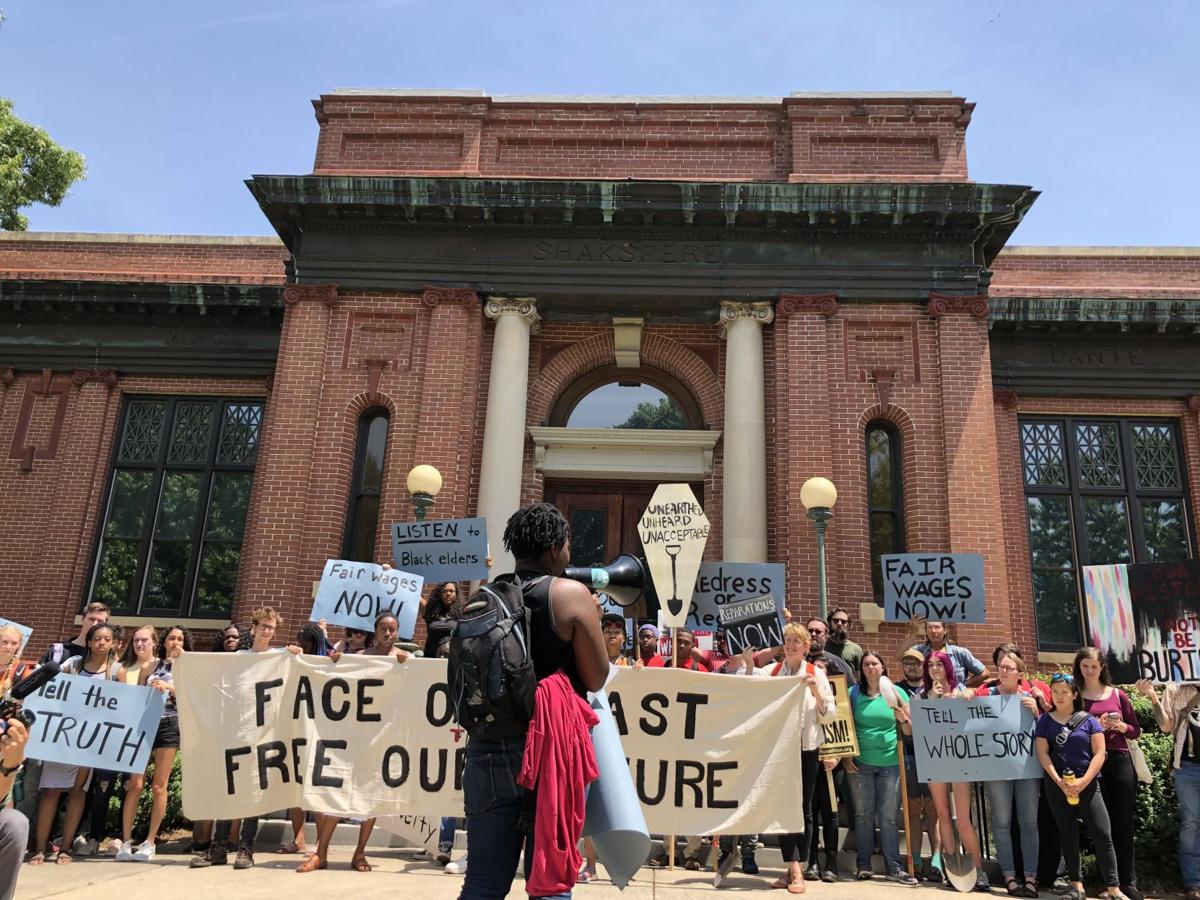 The Coalition for Recognition and Redress march on April 29 ended at the UGA Administration Building. (Photo/Spencer Donovan) 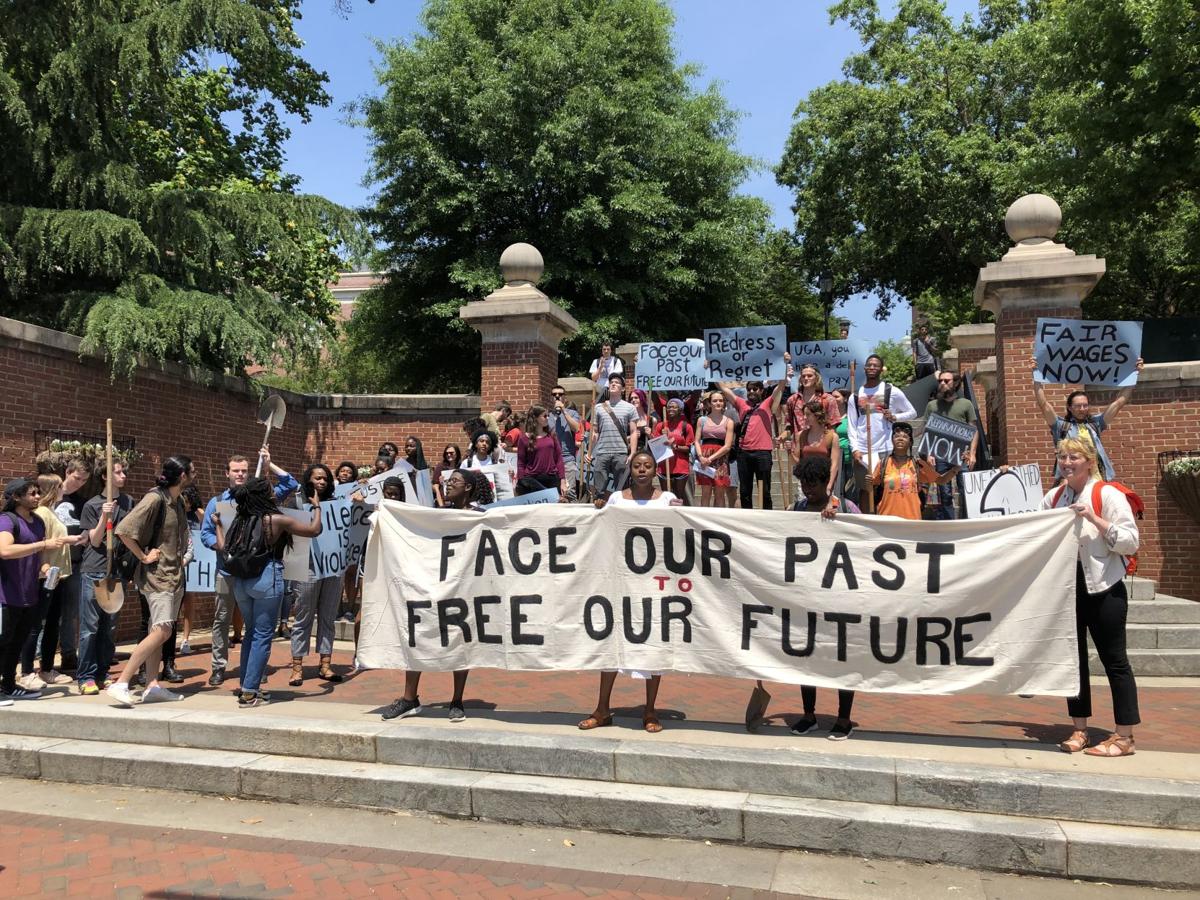 Certain community groups have increasingly called for action by the University of Georgia since activist hand-delivered a letter to UGA President Jere Morehead on April 10. (Photo/Spencer Donovan)

Athens community members, University of Georgia students and faculty protested the university administration’s response to demands for UGA to acknowledge its history of slavery on April 29.

Athens community members, University of Georgia students and faculty protested the university administration’s response to demands for UGA to …

Activists hand-delivered their demands to UGA President Jere Morehead’s office in a letter on April 10. Morehead responded to the demands in a letter to the Red & Black on April 11.

“At the end of the day, we just need to stop the games, and it’s time to get moving on some material changes happening in this community,” Athens for Everyone member Imani Scott-Blackwell said to the crowd of protestors on the steps of the UGA Administration Building.

About 60 people marched from Tate Plaza through North Campus to protest outside the UGA Administration Building. Activists attempted to enter the building, but UGA Police Chief Dan Silk said only six people could enter. Leaders sought to schedule a meeting with Morehead and representative for the University System of Georgia Board of Regents.

Members of the Coalition plan to attend a Board of Regents meeting in August after meeting with Morehead, Athens for Everyone member Rachelle Berry said.

Community groups have escalated pressure on the UGA administration since the premiere of the documentary “Below Baldwin” on March 31. The groups, which include Athens for Everyone and the United Campus Workers of Georgia, have since formed the Coalition for Recognition and Redress.

The protest follows a month of increasing pressure on the UGA administration. Lla Anderson, a sophomore theater and philosophy double major from McDonough, protested in support of a $15 an hour minimum wage for UGA workers and support for local black students to attend UGA.

“What is an apology, what are words without actual action behind it,” Anderson said. “I want some action. I want some change.”

The Coalition plans to engage with the black community in Athens and broaden its “base” this summer, Berry said.

The Athens Coalition for Recognition and Redress held its first community event regarding the remains uncovered during an expansion project at Baldwin Hall on the University of Georgia campus in 2015. Local activist groups such as Athens for Everyone and United Campus Workers of Georgia comprise the coalition.

Irami Osei-Frimpong went through a hearing led by the University Judiciary for charges of completing a university form dishonestly. The graduate assistant originally came under fire in January for comments he made on social media.

If approved, the College of Education would be the first college at UGA named after an African American alumni.

Clifford is currently a tour leader at the UGA Visitors Center and undergraduate assistant at the Community Mapping Lab. He will graduate with a bachelor’s degrees in geography and comparative literature as well as a certificate in geographic information science.

The Coalition wanted the meeting to discuss its demands of the UGA administration, including that UGA acknowledge its history of slavery.

4 things: Top news stories from the past week

From the Athens Human Rights Festival to protests at the UGA Administration Building, catch up on the top Athens and UGA news stories from the past week.

In the midst of heavy rain showers on May 4, one Athens resident, Fred Smith Sr., marched across the grounds of Baldwin Hall at the University of Georgia, in silent remembrance of the 105 bodies discovered underneath the building in 2015.

The Coalition for Recognition and Redress requested a meeting date be set with Morehead and a representative of the University System of Georgia Board of Regents on April 29. Coalition leaders were told they would have a response within two to three business days, but UGA has not yet responded to their request.

You should turn your protesting zeal towards the ridiculous cost of attending a public university and demand warnings be attached to certain majors admonishing the would-be student that s/he will likely never earn enough money using the aforementioned degrees to pay back the student loan used to acquire it.
As long as you folks keep paying more and more money the University and others like it will keep taking it and more. I've never understood how higher education seems to get a free pass from the "Rent's too dang high!" crowd.
As someone who graduated a long time ago college looks like a bunch of privileged folks on a never ending search for things to be upset about.
Recognize right and wrong. Do what you can to make things better. Don't beat a dead horse. Should I protest the Moors who kept European slaves quite contemporaneously with the Americans although likely in much greater numbers than were kept here in the Colonies. I was never a slave. I don't know any slaves. Why should I waste any time or emotion on the matter. Again, if you want to do good take action to put pressure on those who still keep slaves today in parts of Africa or, if you like, closer to home in Cuba where the majority of the population are slaves toiling for their government.
In summary:
Let's talk about making college less ridiculously expensive.
Think before you get a degree in underwater intersectionality. No one owes you a living wage just for showing up with a pulse.
Channel your courage and resolve to fighting real problems. They're out there.