Over the last 10 years, University of Georgia Greek Life Office administrative assistant Lasina Evans stole over $1.3 million from external accounts for the Interfraternity Council, Panhellenic Council and UGA Miracle. Evans' superiors, former Director of Greek Life Claudia Shamp and former Assistant Director of Greek Life Elizabeth Pittard, ran the office with an environment of negligence that enabled Evans to steal the funds, according to UGA investigators.

The full story: How lack of oversight allowed a Greek Life employee to steal $1.3 million over a decade

The Red & Black received UGA Police Department and UGA Internal Auditing Division documents received through an open records request on Aug. 30. The documents detail Evans' theft and Shamp and Pittard's failures to provide financial oversight. In the spirit of transparency, The Red & Black has published the documents below. 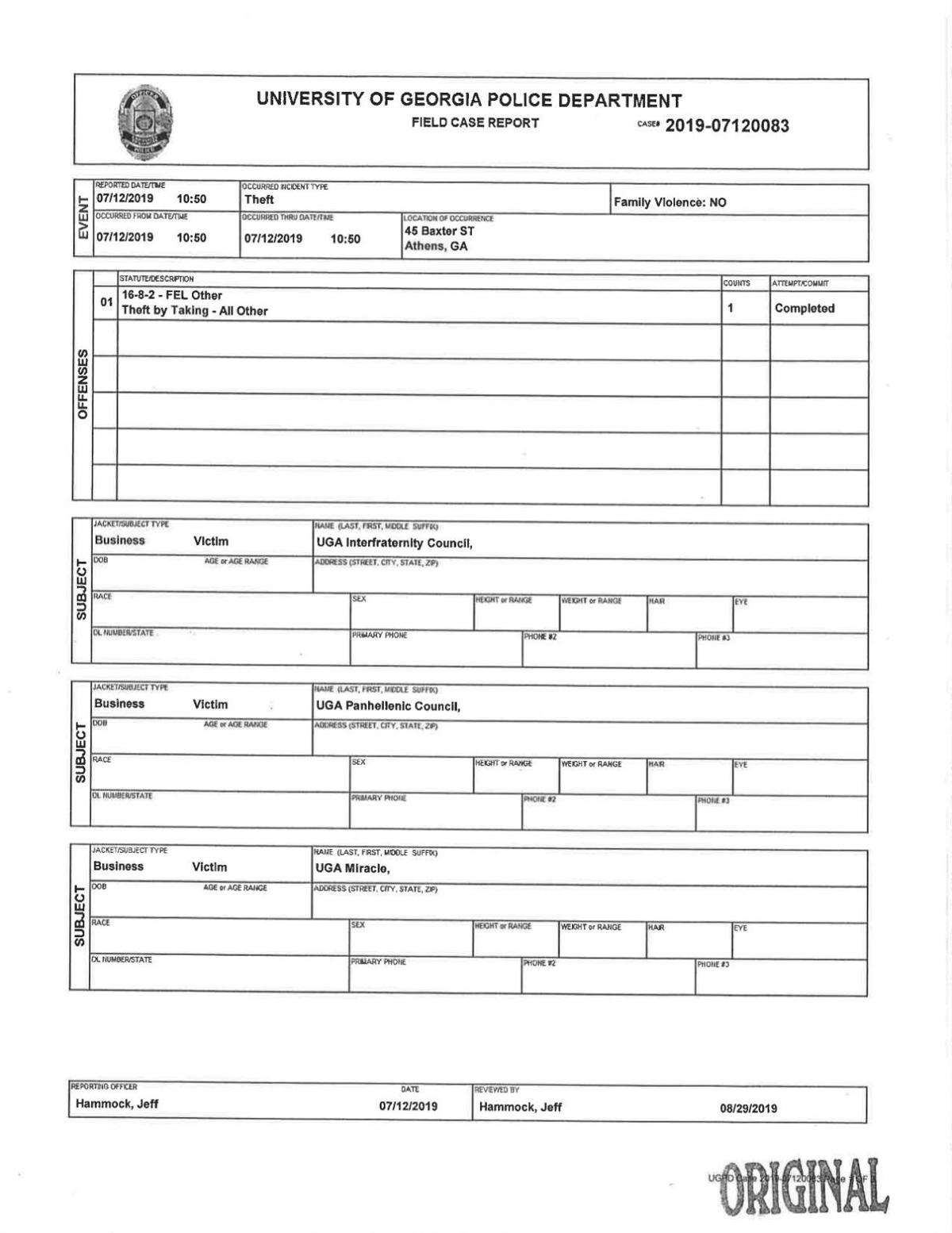 UGAPD and UGA IAD conducted a joint investigation into the missing funds as detailed in the 51-page report attached above. Investigators interviewed Evans' family, Shamp, Pittard and other GLO employees, discovered how Evans committed the thefts and reviewed Shamp and Pittard's management of the GLO. 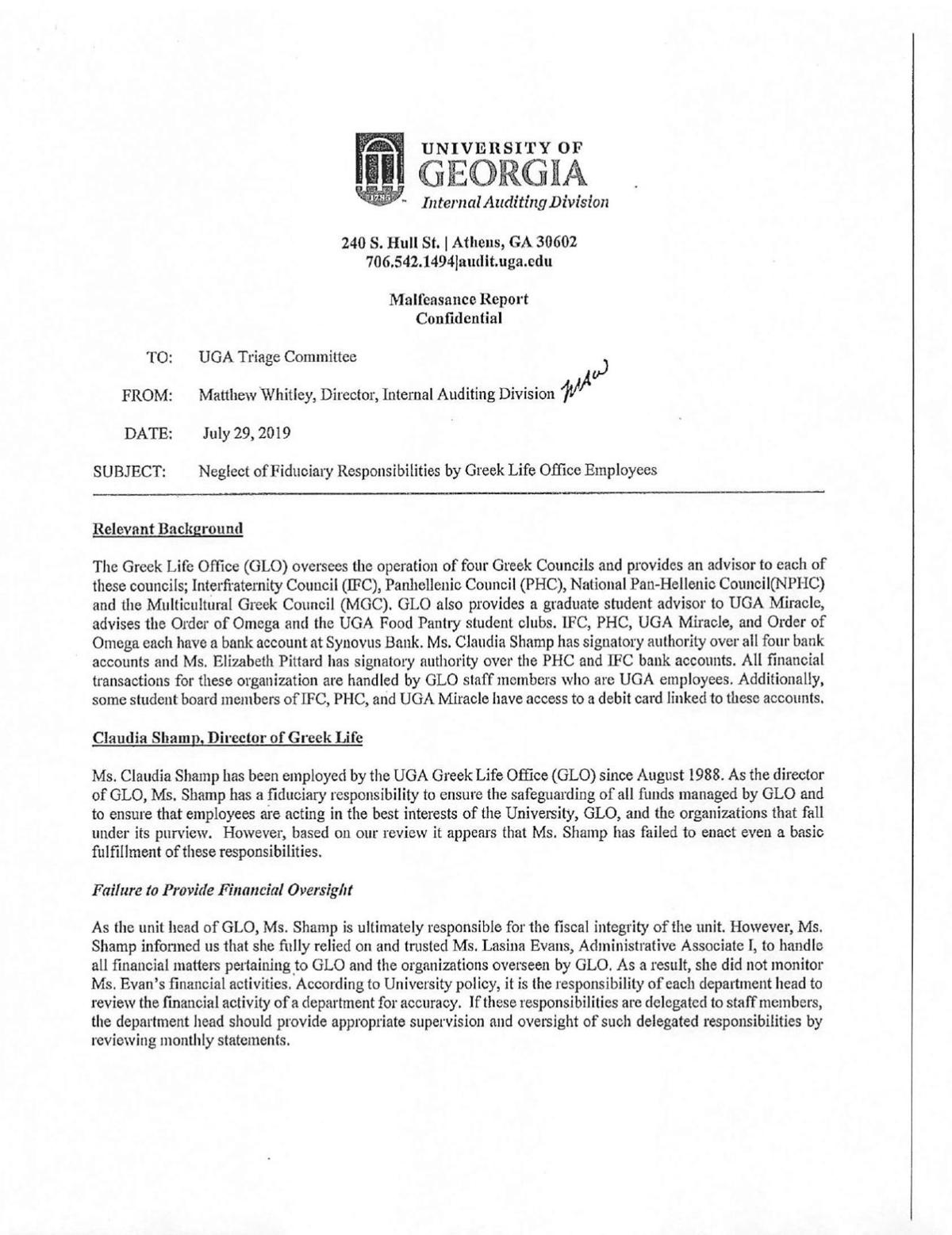 UGA IAD Director Matthew Whitley details the operational failures of the GLO in the malfeasance report attached above. Whitley sent the report to the UGA IAD Triage Committee on July 29. The committee "addresses allegations of fraud, waste and abuse" at the university, according to the UGA IAD website. 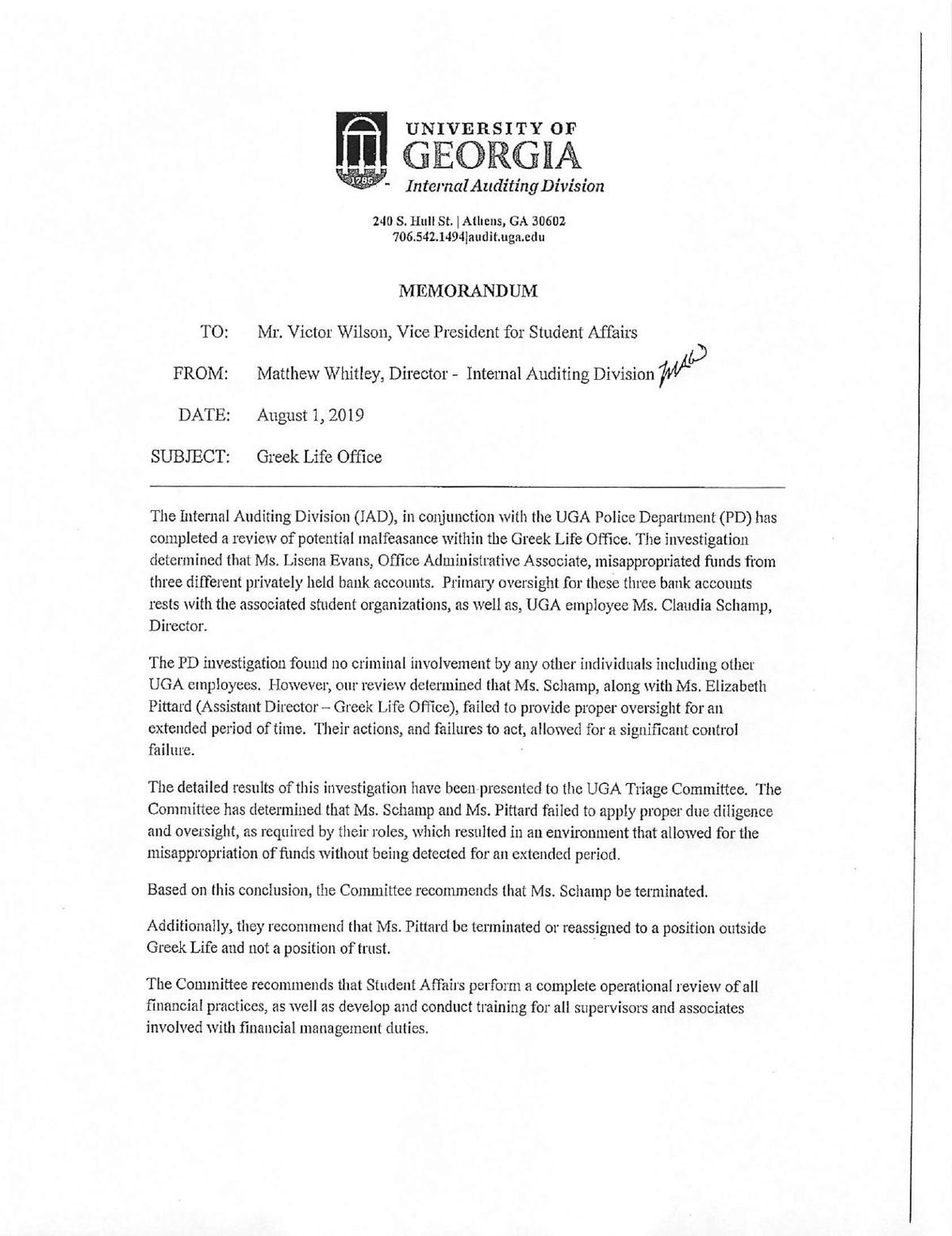 The Triage Committee recommended Shamp be terminated and Pittard be terminated or reassigned outside of the GLO in the above memorandum Whitley sent to UGA Vice President for Student Affairs Victor Wilson on Aug. 1. The committee also recommended UGA Student Affairs completely review its financial practices in the memo. The memo summarizes UGA IAD's findings and the Triage Committee's conclusions. 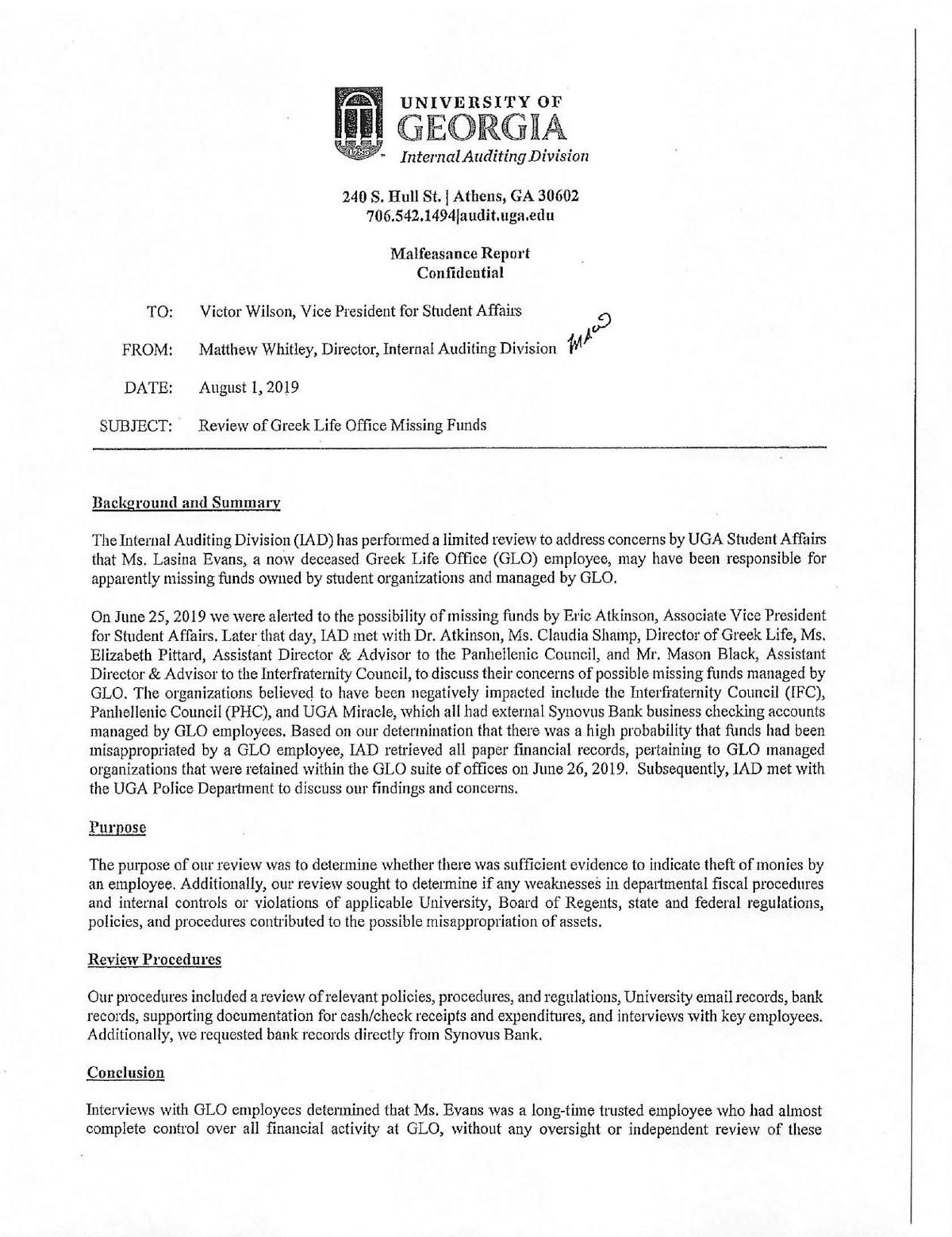 UGA IAD recommended UGA Student Affairs create new financial policies and amend current financial policies in the above malfeasance report sent to Wilson on Aug. 1. In the report, UGA IAD recommended Wilson work with the UGA Office of Legal Affairs to consider “possible legal action against parties involved in the loss of funds managed by GLO and possible insurance recovery.”

How we got the story

The Red & Black was the first media outlet to report on this story. On Aug. 23, The Red & Black began receiving tips that financial improprieties had occurred in the University of Georgia Greek Life Office. On Aug. 26, UGA provided a statement acknowledging that misappropriation of funds held by student organizations had taken place. We submitted an open records request that night to the university seeking documents from the Internal Auditing Division and the UGA Police Department related to the misappropriation of funds.

Throughout the week, we continued to receive tips about Shamp’s departure and the involvement of a UGA employee who killed herself in June, which The Red & Black had reported on over the summer. We received a copy of an Aug. 23 email sent to sorority advisors confirming the retirement of Shamp and resignation of Pittard. On Aug. 30, we received 61 pages of IAD and UGAPD documents from UGA detailing Shamp and Pittard’s negligence, Evans’ identity and other details.

Three University of Georgia student organizations that lost $1.3 million due to a decade of theft have been reimbursed, university spokesperso…