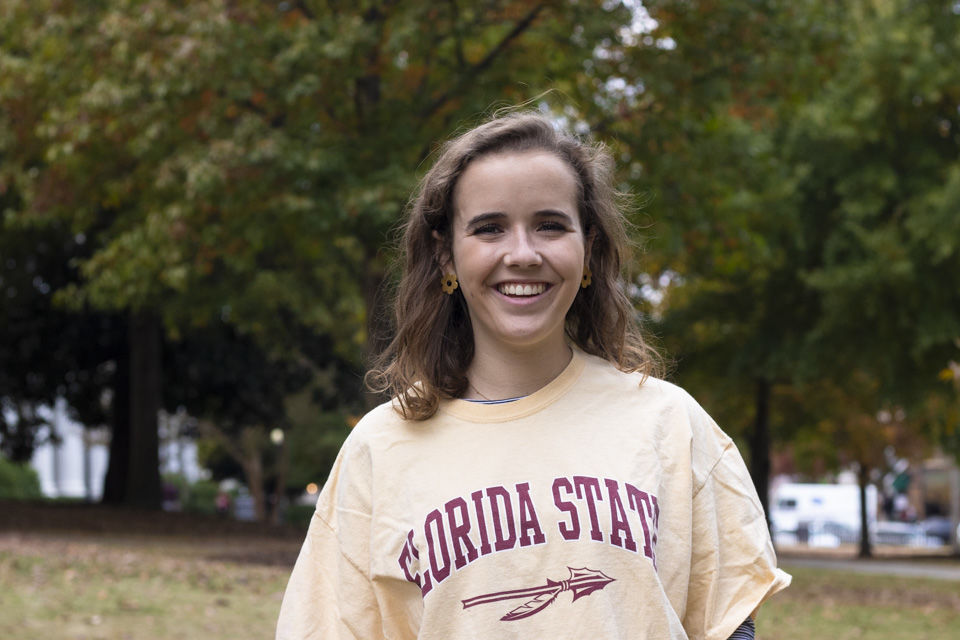 Sallie Smith, a 19-year-old landscape architecture student from Tallahassee, Florida, poses on UGA's North Campus in Athens, Georgia, on Tuesday, Nov. 19, 2019. Smith came to the University of Georgia for her major, and she has enjoyed her time in Athens so far. (Photo/Caroline Barnes) 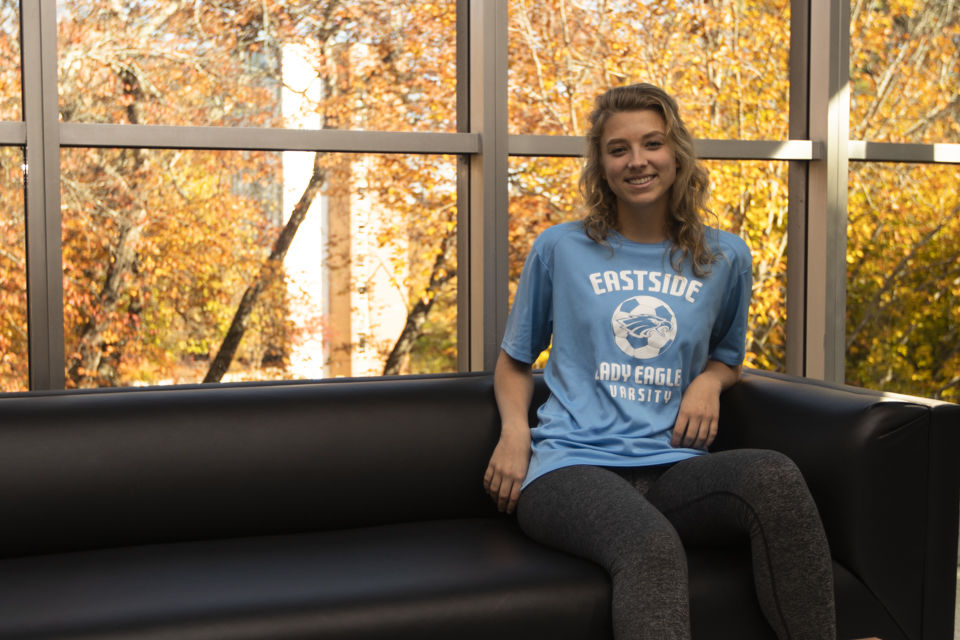 Leah Wilkins poses inside her freshman residence hall in Athens, Georgia, on Tuesday, Nov. 19, 2019. Wilkins is from Greenville, South Carolina, and wears her high school varsity soccer T-shirt. She is the only student from her high school to attend UGA. “When I stepped on campus, I felt like I already went here,” Wilkins said. (Photo/Taylor Gerlach) 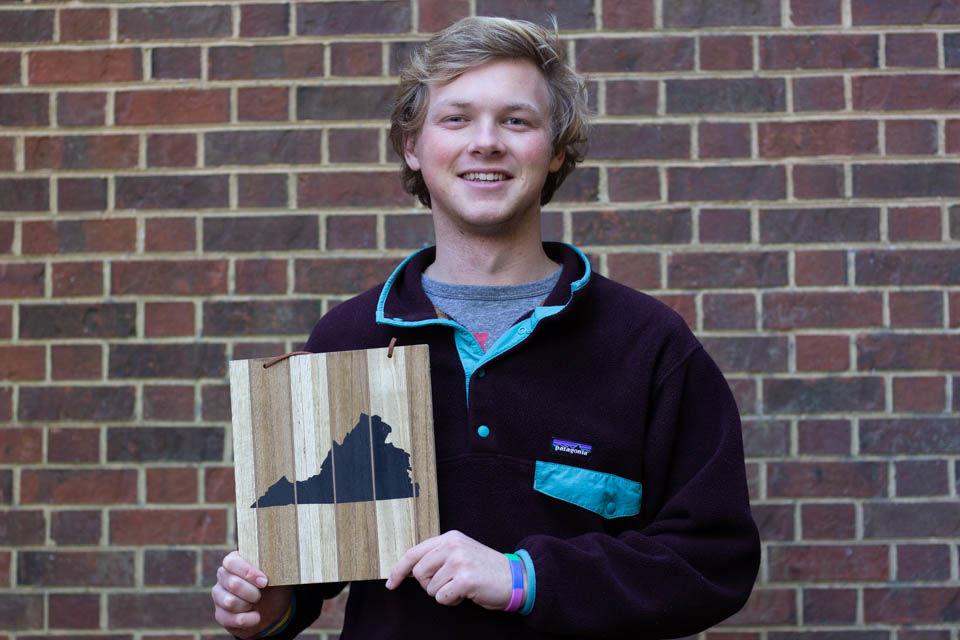 Christian Carlow, a University of Georgia sophomore from Richmond, Virginia, poses in Athens, Georgia, with a memento from his hometown on Tuesday, Nov. 19. Before leaving for college, Carlow and his close friends each bought a wooden plaque with the state of Virginia painted on it. (Photo/Sofia Gratas, sofigratas@gmail.com) 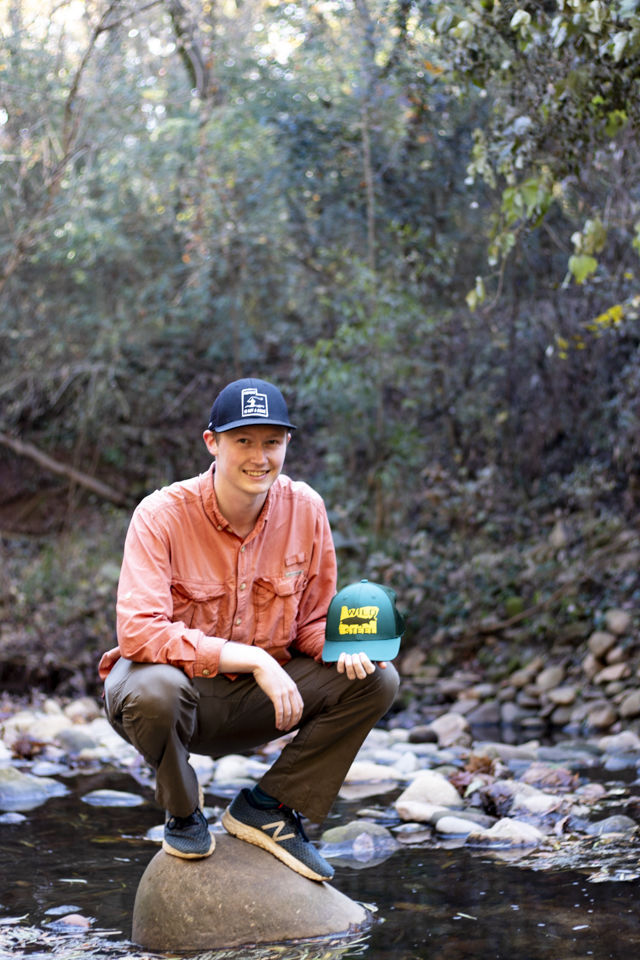 Claire Bunn came to the University of Georgia from Marion, Arkansas. To her friends who grew up in Georgia, that makes her “the exotic one” among her friend group. In 2018, just 25 students from Arkansas attended UGA.

“I came here out-of-state, didn’t know anyone, and that can be really intimidating,” Bunn said.

Out-of-state, or non-Georgia resident, students made up just 13.5% of the entire student population in fall 2018. Many, like Bunn, come to Athens without knowing anyone on campus.

For the lucky few, there’s a familiar face from high school or a family friend to rely on, and out-of-state students must learn to adapt to their new and unfamiliar environment.

For the 31,422 students who call the state of Georgia home, the perks of being an in-state resident are often taken for granted. In-state students may enter college with former classmates from their high school. For those who are the only one from their school to go to UGA, at least there is a high probability that the first person they meet on campus will also be from Georgia.

Freshman Leah Wilkins arrived at orientation from Greenville, South Carolina knowing it was an opportunity to make friends quickly.

“I actually was coming in to zero friends, so I really used orientation to my advantage and actually made a group of friends who I mostly hang out with now,” Wilkins said. “Coincidentally, two of the girls I met at orientation live right across the hall.”

Wilkins hopes to pursue sorority recruitment in the spring semester after meeting other girls involved in Greek life through her new friends. Out-of-state students have found campus involvement through other student groups such as intramural and club sports teams, academic clubs and service organizations.

For Richmond, Virginia native and sophomore Christian Carlow, club swim team and First-Year Senate helped him acclimate to life on campus. While these groups made UGA feel more like home, Carlow still felt he was in a “sink or swim environment” during his first year.

“If you’re lonely in your room and you’re from somewhere in Georgia, you can just text a friend from high school and say ‘Hey, you want to get dinner?’” Carlow said. “When I realized how much of a tried and true Georgia school it is, that definitely took some getting used to.”

The transition became easier for Carlow once he met other out-of-state students.

From lands far, far away

In 2018, North Carolina, Florida, South Carolina, Texas, Tennessee and Virginia sent the most undergraduate students to UGA. Over the past five years, these states, along with New York, New Jersey, Maryland and California, have consistently enrolled over 120 students.

“With more than 40,000 high schools in America, UGA can’t visit them all,” associate vice president for admissions and enrollment management Patrick Winter said in an email to The Red & Black. “We try to focus our in-person recruitment in Georgia and in out-of-state markets where we have been successful in the past and where we believe that we have a good chance of enrolling competitive students.”

UGA employs full-time admissions counselors in Dallas and Washington, DC due to the “high demand and interest from students in those geographies,” Winter said.

Graduate student Guy Eroh came to UGA from Portland, Oregon in 2015. When he arrived on campus, he was excited to meet students outside of his hometown.

“One of the things I was looking forward to was getting to meet people outside of the West, outside of where I come from,” Eroh said.

According to Winter, UGA admissions staff attend college fairs, visit high schools and host receptions and informational meetings for prospective students both inside and outside of Georgia. Alumni who live in states that contribute smaller enrollment numbers will host these events if admissions counselors are unable.

All about the money

Carlow and Smith ultimately chose to attend UGA after receiving scholarship money. They realized that without the financial assistance, they wouldn’t have been able to move to Athens.

“I wasn’t going to be able to come just because I wanted to, so I worked through high school with my academics to make that happen,” Smith said.

For an undergraduate Georgia resident living on campus in the fall 2019 and spring 2020 semesters, the cost of attendance is $27,450. That number increases to $47,136 for out-of-state students living on campus. The cost of attendance includes tuition, fees, room and board and estimated book and living expenses. UGA offers an out-of-state tuition waiver on a competitive basis.

Though out-of-state students are eligible to receive scholarship money, many of the first-year awards provided through the university are only applicable to Georgia residents. Additionally, if Georgia residents finish high school with a certain GPA, they are eligible for most of their tuition to be covered by the HOPE and Zell Miller scholarships.

Bunn and Eroh, who are Foundations Fellows, came to UGA for the scholarship opportunity to study at a large research institution.

“They want a school where they can be challenged and grow intellectually. They want an experience that will allow them to have opportunities for advancement after college – whether entering the workforce or going on for additional education,” Winter said.

Carlow appreciates UGA’s distinct culture where “everyone is academically motivated but also down to earth.”

One tour at a time

Bunn, a sophomore biochemistry major, is also a UGA tour guide. She uses her experiences to relate to prospective students nervous about crossing the state line.

“I think going out-of-state can be a really great experience, but that can be really intimidating,” Bunn said. “I just tell them to always reach out to others and don’t be afraid to take that first step.”

For many out-of-state students, the campus tour helped solidify their decision to apply to UGA or accept admission. Meeting students and faculty on campus, learning about course offerings and exploring Athens helped confirm what many students heard from alumni and friends.

“Some of the most impactful recruitment is conducted by successful undergraduates or alumni who have had a good experience here and want to tell others about it,” Winter said.

Sophomore Sallie Smith grew up with two alumni her whole life – her parents, who met at UGA.

Even though Smith grew up as a Bulldog fan in a town of the Florida State Seminoles, she wasn’t deterred from pursuing UGA, which was also suitable for her landscape architecture major. Smith wanted to make sure she was getting the best education she could, and she found that at UGA.

This article is the next installment of The Red & Black's series, "Planting new roots." If you want to be featured in the series, send us a news tip, or tweet us @redandblack.

Finances and family: Obstacles confront UGA international students' future plans in the US

International students face various obstacles at the University of Georgia, including time away from family and limited financial aid opportunities. These challenges contribute to an international student's decision to continue their education and careers in the U.S. or return to their home countries.

UGA's International Education Week 2019 is recognized from Nov. 18-22. Throughout the week, the International Student Life will host events to promote international education, such as free passport photos and the Parade of Flags.

From France to Georgia: How Baptiste Anselmo ended up with the Bulldogs

The Red & Black will preview the upcoming spring season with stories on each of the four freshmen, three of whom are from outside the United States. Part one focuses on Baptiste Anselmo.

While University of Georgia students may not be staying in Athens for Thanksgiving break, they still have an opportunity to celebrate the holiday on campus for the 11th year in a row.

The University of Georgia University Council met on Nov. 20 for its last session of the seme…

Set against the backdrop of a segregated south and a newly-integrated University of Georgia,…

Chomping at the bit: Georgia-Florida matchup will have big ramifications in the SEC

When UGA and Florida face off in Jacksonville on Nov. 2, they will have a lot behind them. They have a history filled with a bench clearing celebration, attempts to run up the score and strange timeouts.

'Wouldn’t have it any other way': Rodrigo Blankenship becomes Georgia’s all-time leading scorer

Rodrigo Blankenship walked out onto Dooley Field at Sanford Stadium for the last time in his career on Saturday against Texas A&M. He walked off as the all-time leading scorer in Georgia football history.

The National Science Foundation has awarded the University of Georgia’s Engineering Education Transformations Institute, which is part of the …

During the fall 2018 final exam season, University of Georgia student John Smith said he sold more than 500 Adderall pills to other students. …

On Tuesday evening Dec. 10, Tailgate Athens presented Extra Special People with a $5,000 donation. Located in downtown Athens, the casual clothing store designed “Dress Down with the Dawgs” shirts to support the nonprofit for the Oct. 12 game.

The Georgia swimming and diving team has kept busy during the fall season, and it is only getting started. Though Gabrielsen Natatorium, Georgia’s home pool, has been quiet for far too long.

The Georgia Senate bill would require all University System of Georgia research universities, including UGA, to offer 90% of early action admissions to Georgia residents.