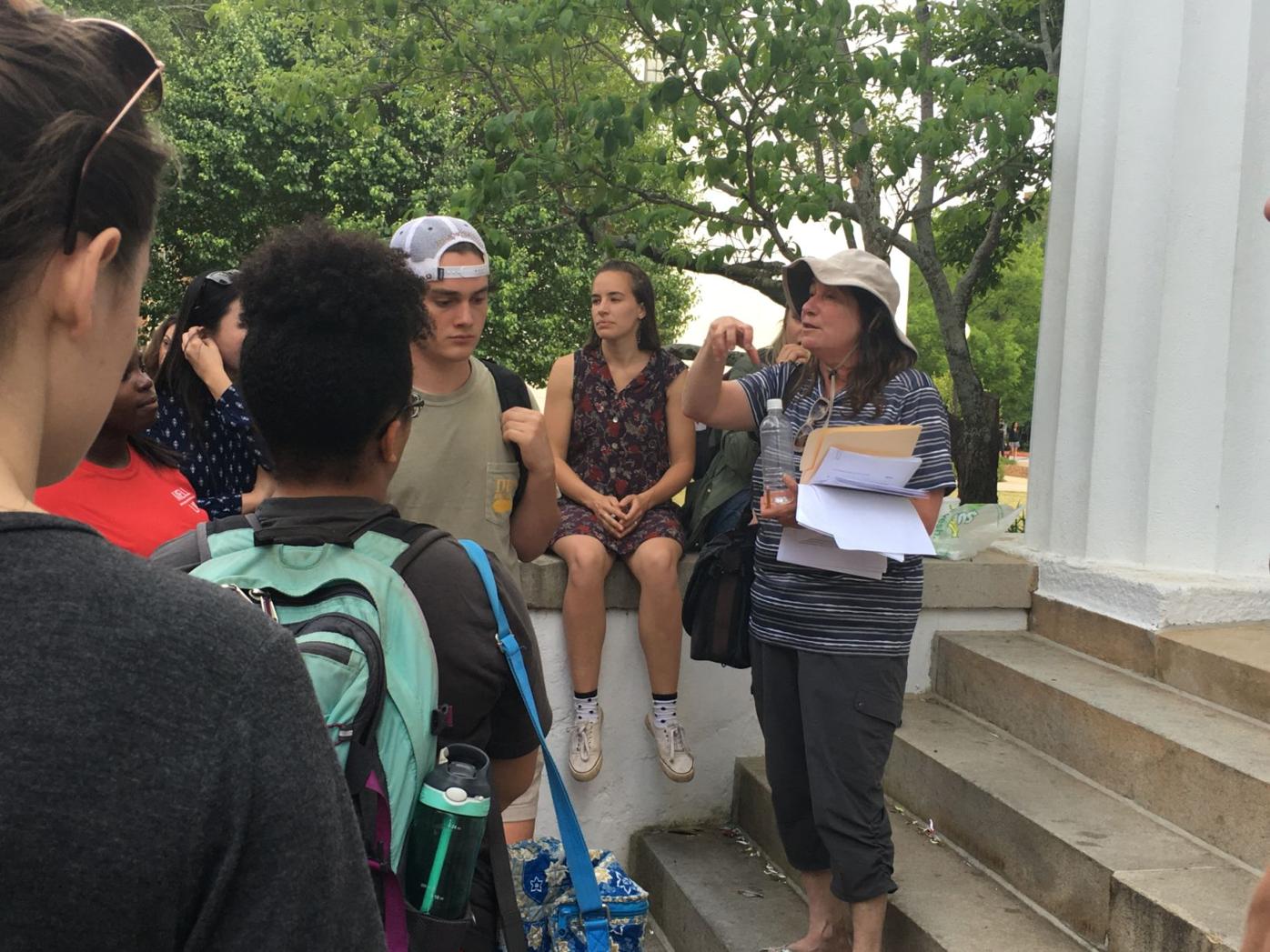 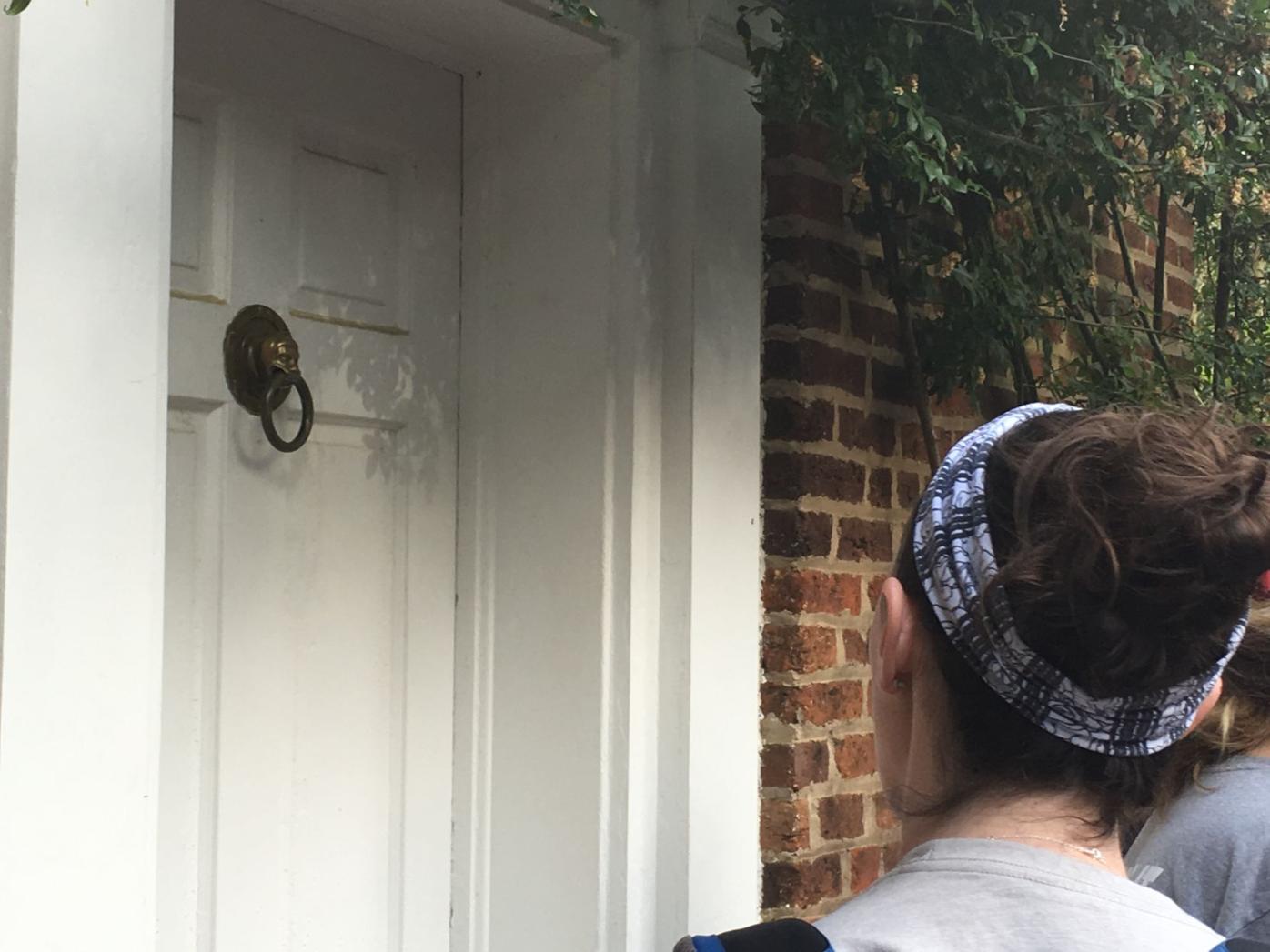 On Thursday evening, a group of about 25 people gathered at the globe inside the Geography Building, about to set out on an hour-long trek across the University of Georgia campus to hear about racialized spaces on campus.

“What we are going to be doing as we walk through campus is we will be considering a few basic axioms of landscape studies,” said Amy Ross, associate professor in the Department of Geography and guide for the trip.

The group planned to walk through campus, from the Geography Building to the Arch.

“We will be noticing things about it that are violent and also quite frankly beautiful,” Ross said. “Some of that beauty is on purpose, in some ways to disguise the violence.”

The group made stops on campus at familiar locations such as Sanford Stadium, the Memorial Garden outside the Zell B. Miller Learning Center, the Founders Garden and the Chapel on North Campus.

The idea for a campus walk focused on racialized spaces on campus came from a few students in the Geography Undergraduate Student Organization, who were also enrolled in Ross’ Geography of Sub-Saharan Africa course.

“Race itself as an institution is a big conversation piece within geography. Every class we have touches on it in some way,” said Victoria Mckenney, the public relations coordinator for GUSTO.

In the course on Sub-Saharan Africa, McKenney said the students discussed their perceptions of Africa and how it has been socially constructed.

“A lot of what the geography of Africa class is about is how we create the idea of Africa,” saidChristine Kil, president of GUSTO. “How Africans are supposedly one-dimensional.”

The students in the Sub-Saharan Africa course had taken a similar tour of campus and decided to share it with GUSTO and the campus at large,” McKenney, a senior public relations and geography major from Duluth, said.

”This tour is supposed to look at the racialized spaces on campus,” Kil said. “The underlying messages you don’t think about ever.”

At each stop along the tour from the Geography Building to the Arch, Ross questioned the students on why certain landmarks were on campus or why they were placed in their position on campus.

Ross said that, in fact, Sanford Stadium is not at the geographic center of campus, but because of the culture of the university, it is regarded as the center.

At the Memorial Garden, which is the set of stones outside the Miller Learning Center, Ross discussed how most students pass by landmarks on campus, without giving thought to their meaning.

Just inside the learning center is a ‘Book of Remembrance’ connected with the Memorial Garden, which most of the students on the tour said they had never thought about.

McKenney said as she is a geography major, she is trained to think more critically about spaces on campus, but said she did not think most students thought about why these landmarks were on campus.

At the Founders Garden, Ross pointed out a small doorknocker on one of the walls surrounding the garden.

Many of the students on the tour described the doorknockers as an animalized depiction of an African American male.

Ross said the Founders Garden was designed as a memorial to the first women’s garden club in Georgia.

The Ladies’ Garden Club of Athens started in 1891, just a few years after the end of the United States Civil War.

“The first club was composed of white southern women who were adamant on making sure that newly emancipated African Americans were not going to get any land,” Ross said. “They wanted to say we are civilized and these people that want it now should not have it because they are not of our culture.”

Ross said the gardens created by these women’s garden clubs typically contained these “strange ornaments that suggest that African Americans are maybe not as human.”

What Ross said was particularly concerning about the Founders Garden at UGA was its dedication in the 1960s during the Civil Rights movement.

Ross hypothesized the garden was built to make a statement that many at UGA did not want the school to desegregate.

“Why are they still up? I know it’s that history shouldn’t be forgotten, but I think it deserves a discussion on why it is the way it is,” McKenney, said.

JScreen, a company that focuses on testing Jewish people for genetic disorders, visited the Rohr Chabad House at the University of Georgia to provide services free for students April 10.

With more than 100 students bustling about in the courtyard of Joe Brown Hall playing Japanese Yo-Yo fishing, trying on Swahili clothes and tasting Kimchi Bokkeumbap, the Department of Comparative Literature held its third annual Jamboree on March 30.

As an Asian American, Brian Xu had his first encounter with racism in elementary school when two Hispanic kids called him “Chino Cochino,” or “dirty Chinese”.

3.4 million people die each year due to unsafe drinking water, according to Embrace Relief, a non-profit humanitarian and disaster relief organization.