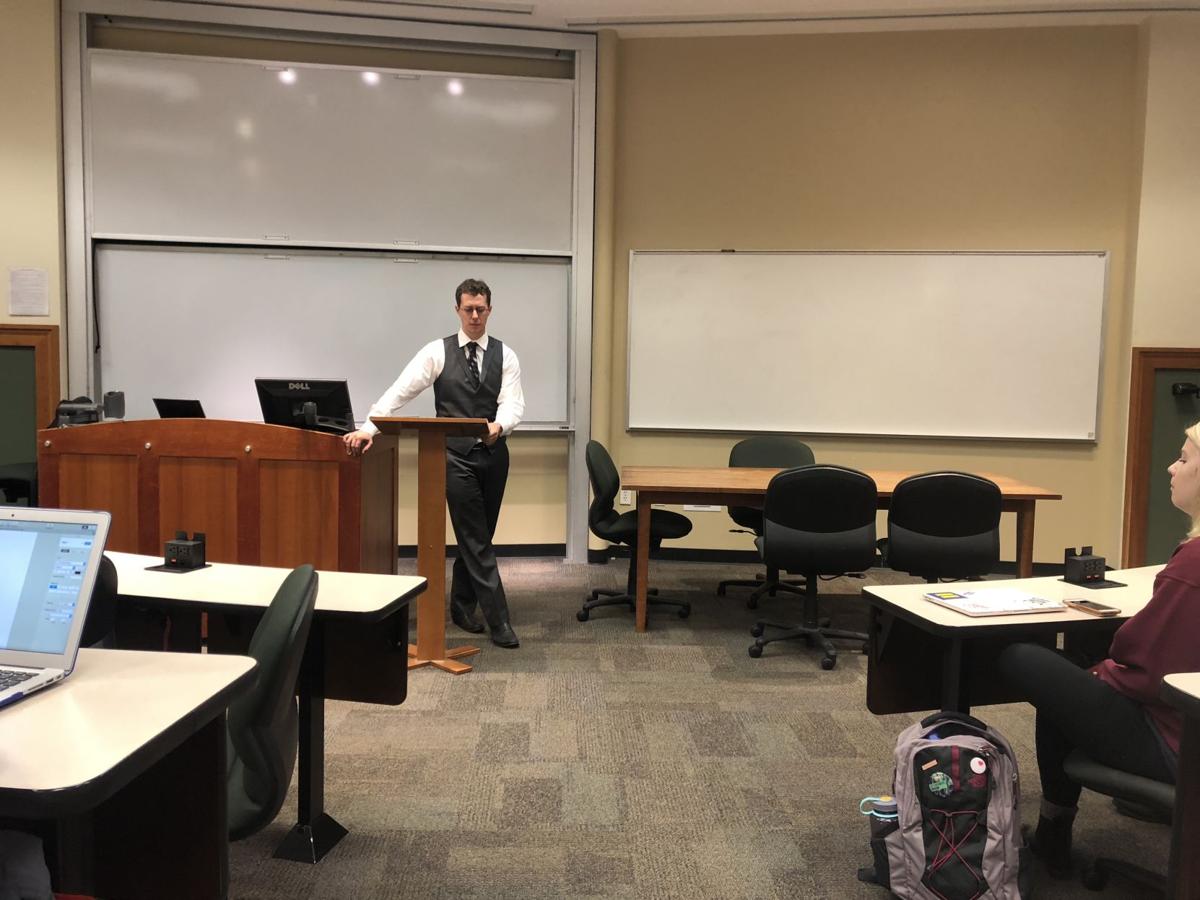 University of Alabama professor George Hawley lectures in the Miller Learning Center on the University of Georgia campus on Nov. 12, 2018. 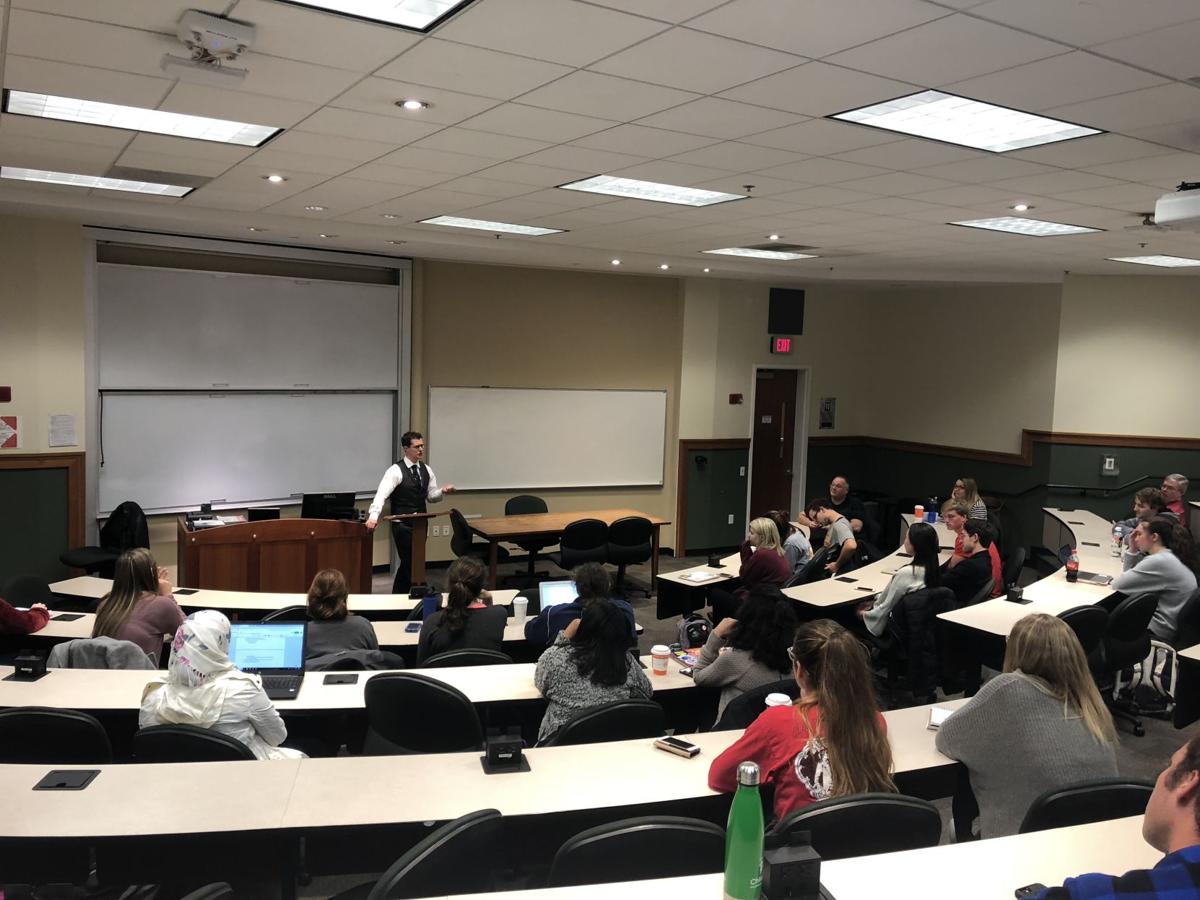 Students listen to George Hawley, a University of Alabama professor, during a lecture on the future of conservatism in America.

Less than a week after the 2018 midterm elections in Georgia, University of Alabama professor George Hawley, who also researches elections and political parties, held a lecture Nov. 12 on the future of the conservative movement in America in the Miller Learning Center at the University of Georgia.

At the beginning of his lecture, he answered the title of his talk, “Does the conservative movement have a future?”

“The answer is yes,” Hawley said. “But I will say that it is unclear what the future of the conservative movement will look like.”

The future of the conservative movement

Two vital issues, Hawley said, for the conservative movement are to adapt by “stepping into the 21st century” and to stop “liberal bashing.”

Hawley teaches a course on conservatism at the University of Alabama, which he said is typically comprised of young conservative students, many of whom aspire to work in politics.

“I ask them to spend a little bit more time thinking seriously about these questions and a little bit less time holding up signs that say ‘socialism sucks,’” Hawley said. “‘Owning the libs,’ to use that contemporary colloquialism, is not a political agenda or a coherent philosophy.”

Hawley said by bashing the left, the right fails to improve America and instead aids in the division between the left and right. By the same token, he said the conservative movement’s lack of response to the 21st century has hurt instead of helped its platform.

Hawley said conservative Republicans missed an opportunity two years ago to regroup itself by addressing 21st century talking points and instead continued to focus on tax cuts.

“I think we’re hitting a ceiling on how much political gain you can get from that,” Hawley said.

And while Trump chose to disregard much of the conservative rhetoric of the movement, Hawley said “The Republican electorate shrugged its shoulders and voted for him anyway.”

Hawley said the way conservatives view Trump’s presidency after his term will be determined by whether or not he wins reelection in 2020.

“If Trump is re-elected and ultimately remembered by many Americans as having been a successful president, I suspect a strong element of the conservative movement was that Trump was, in fact, a conservative at one time and, perhaps, even the real successor to Ronald Reagan,” Hawley said.

At the same time, Hawley said if Trump fails to be re-elected, the conservative movement will instead call Trump’s presidency a fluke and error in judgement.

MAGA and the power of nostalgia

The key last word of his slogan reminds Americans of a time when the country was in its prime, resonating with conservatives. Hawley said many conservatives cherish the 1950s or 1980s as the heydey of American culture and politics.

In order to provide context for the future, Hawley lectured on the history of conservatism up into the 1960s.

Avery Evans, a junior international affairs and sociology major from Decatur, enjoyed the historical background of the conservative movement given by Hawley.

“I feel like a lot of times when you see critiques of Republicans, it’s much more baseline Trumpian stuff that doesn’t actually get into the root of the issues that are debated,” Evans said.

Hawley said many of the students enrolled in his course on conservatism lean toward the right themselves. But for those who attended his lecture, many were either ideologically ambiguous and or leaned left.

“I identify as more liberal, but it’s always interesting to hear critiques of conservatism from someone who seems to be from that background and know more about it than me,” Evans said.

Although Leilani Münter is a race car driver “first and foremost,” she sees herself as a cat…

A crowd of 33 people gathered in Phi Kappa Hall on Nov. 8, to witness the Literary Society’s…

An important part of the holiday season is actually making it to your destination on time and in one piece. You can’t reconnect with family an…

If you’ve been to downtown Athens, you’ve probably seen someone asking for money or help. When asked, you’re forced to make a decision: to giv…

Online images of the devastation caused by natural disasters often elicits feelings of empathy for the lives lost and homes destroyed. But whe…