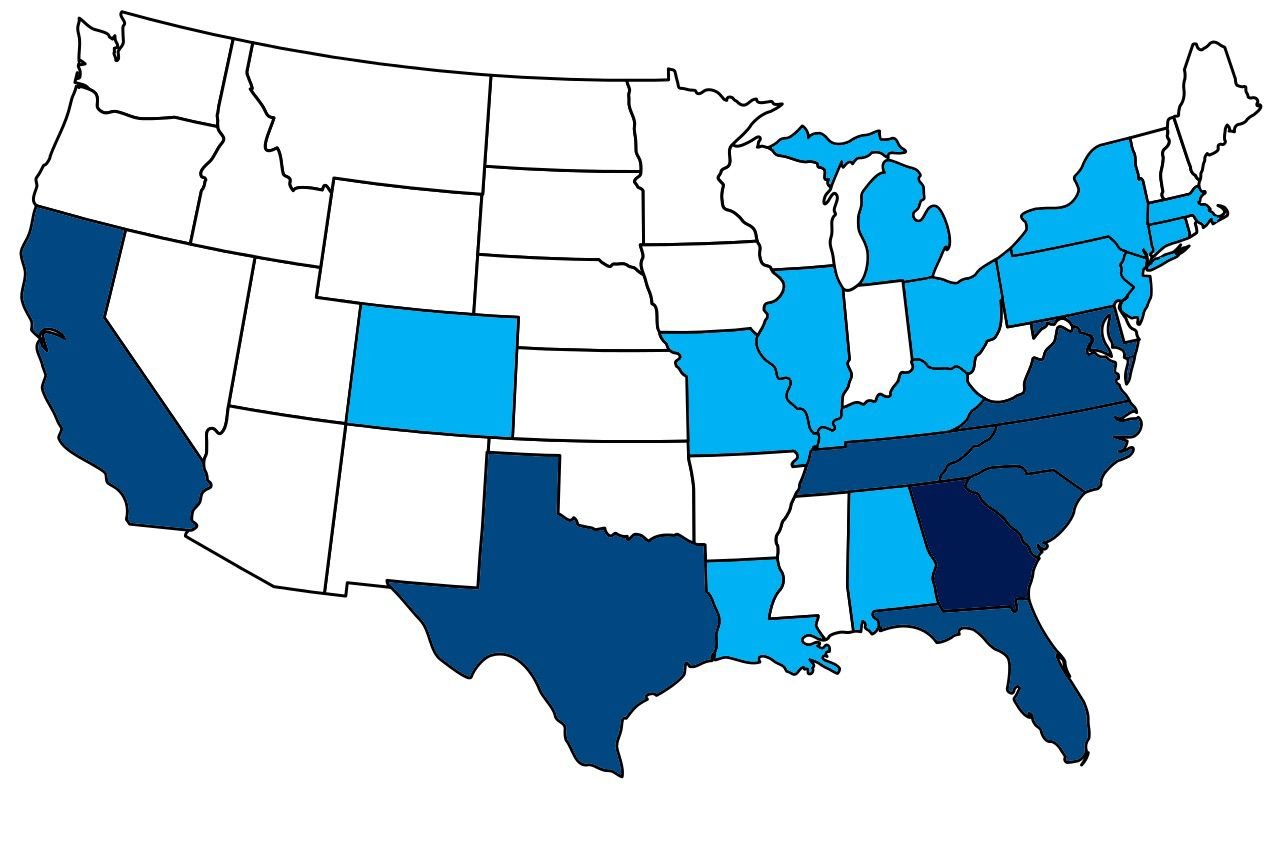 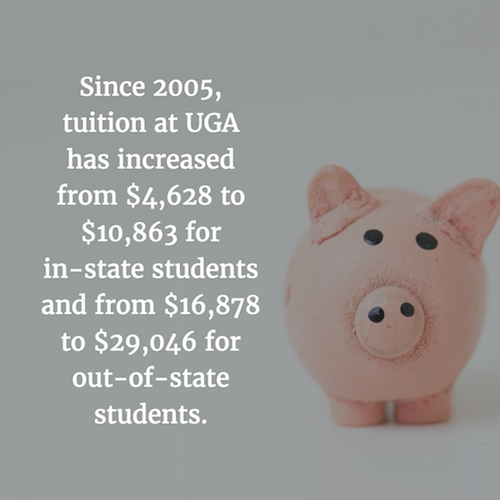 When she was applying to colleges, Ana Duron knew she wanted to get out of Maryland.

“I only applied to one in-state school, and most of the schools were pretty far away,” said Duron, a sophomore at the University of Georgia. “I just wanted to get away from where I grew up and force myself out of my comfort zone.”

Duron is one of 227 UGA students from the state of Maryland, and one of only 7,619 students who are from out of state.

That number, however, is on the rise.

According to a recent New York Times study, the number of out-of-state freshmen at public colleges across the United States has nearly doubled since 1986.

“It is exciting because we have students attending Georgia from all over the United States and all over the world,” said Amanda Dale, the senior associate director of admissions.

“Falling in love with UGA was the easy part. Figuring out tuition and costs was the hard part,” said Laura Antonelli, a UGA student from Rhode Island. “I had actually put my deposit down at a different school because it was the cheaper option, but I just did not feel as if I belonged there.”

Create your own infographics

To alleviate the financial difference, the university awarded 1,096 tuition waivers in 2015, according to the Fact Book.

Despite the increases in tuition and the stricter requirements for the HOPE Scholarship, enrollment at UGA continues to increase each year.

As for the reason behind the increase in out-of-state students, many said they decided to go out of state for a number of different reasons.

“If I had gone to Clemson, it would have been a lot cheaper, but tuition wasn’t really that big of a deal,” said Sydney Keating, a UGA student from South Carolina. “I just noticed that UGA was a great school academically and athletically — my two most important aspects in my school search.”

Other students chose UGA because of specific programs that only the university offers.

“My state doesn’t have the athletic training program I wanted to apply for, so I needed to go out of state,” Antonelli said.

Aside from students’ personal reasoning for going out of state, a number of institutional factors contribute to the rise of out-of-state enrollment and the decline of in-state enrollment.

Though the 2008 financial crisis officially came to an end years ago, the effects are still evident in school funding.

The recession caused a decrease in higher education state funding across the nation, and schools are still recuperating.

According to a report by the State Higher Education Executive Officers Association, in 2015 Georgia has had a 3.5 percent increase in educational funding per full-time enrollment student in a year’s time.

The increase, however, only represents a recent trend.

In the past five years, overall educational funding per full-time enrollment student in Georgia has decreased by 3.4 percent, and since the beginning of the recession, funding has decreased by over 20 percent.

Despite increases in state funding, universities in Georgia are still receiving nearly $2,000 less state funding per full-time enrolled student than prior to 2008.

In the past five years, overall educational funding per full-time enrollment student in Georgia has decreased by 3.4 percent

With a decrease in financial support, out-of-state students and the higher tuition can provide an additional sources of revenue for universities.

According to a News York Times article, after getting hit with budget cuts, the public university system in California sought a solution to its financial problems.

An audit revealed that this difference pushed public universities in California to drive out-of-state students’ interest in attending, and paying more for, their universities. The university reportedly relaxed its test score and admissions policy to increase out-of-state enrollment.

Non-resident enrollment in California schools differs from campus to campus, with the lowest being 15.5 percent and the highest being 29 percent.

According to Dale, the University of Georgia seeks to recruit in-state and out-of-state students equally.

“Our recruitment methods are essentially the same for both types of students, although we do some neat things specifically for the state of Georgia,” she said. “Our goal is to authentically tell the story of Georgia. We do this through physical materials, electronic presence, visits to high schools and college fairs, events and, most importantly, visits to campus.”

Often a university’s recruitment strategy can directly influence a student’s decision of where to enroll.

“None of the schools in my state were offering the athletic training program I wanted, but I was offered in-state tuition by neighboring public colleges in New England as recruitment,” Antonelli said.

For the first time in five years, the University System of Georgia’s Board of Regents did not increase tuition.

For many students, tuition is a major factor in their decision for choosing a college to attend. Keating is paying more at UGA than she would have in South Carolina.

“I personally didn’t get any scholarships from UGA, but if I had gone to school in-state, I could have gotten in-state tuition and all the state scholarships similar to Zell and Hope in Georgia so the costs would have been lower than here at UGA,” she said.

But compared nationally, UGA is a lower cost option for even out-of-state students.

“UGA wasn’t really too much cost-wise, because my family was ready to pay tuition at Boston College, which is about $64,000 a year,” Keating said.

For Duron, there was no difference between going out of state and staying in state.

“Going to UGA cost about the same as going to the University of Maryland, especially because I was awarded in-state tuition here,” she said.

According to Kiplinger’s Best College Values, UGA ranks No. 12 out of 100 public universities.

While the relatively-low tuition may deter out-of-state students, a motivator for in-state students is often the HOPE and Zell Miller Scholarships, which help pay for tuition for Georgia universities.

However, recently the requirements for both scholarships have become more difficult, which may force some in-state students to seek out a college education in a different state where they may receive more financial aid.

“There are a variety of reasons out-of-state students choose UGA,” Dale said. “It could be a family tradition, the campus felt just right for them or we offer their major.”

Many students said they were  looking for a new place they could call home for the next four years.

“I didn’t necessarily know I wanted to go out of state like a lot of people do,” Keating said. “I was more looking for a school that I loved and fit me, regardless of where it was.”

“I didn’t necessarily know I wanted to go out of state like a lot of people do. I was more looking for a school that I loved and fit me, regardless of where it was.”

For Duron, it came down to what UGA offered.

“Money was not the only reason I came here,” Duron said. “UGA has a lot of great opportunities, and it’s an all-around great school.”

Some students even sacrificed cheaper price tags at other schools to come to UGA where they felt more comfortable.

“UGA felt like home the minute I stepped on campus,” Antonelli said. “It would have been cheaper to stay in state, but once you come to UGA, you feel at home, even if your real home is 1,000 miles away.”

This story is part of a series that highlights thoughts, trends and trademarks of the University of Georgia community.

According to 2014 data from the Office of Institutional Research, African-American women have a 92.8 percent 6-year graduation rate, the highest graduation rate of any demographic at UGA.

Many Athens residents were initially confused and upset when they heard Mayor Nancy Denson decided to pull an anti-discrimination ordinance from being voted on this month, but now some welcome the time to push for further expansion of the ordinance.

The Tate Student Center will officially be operating as an early polling site in the November presidential election.

The UGA Libraries implemented three new ‘fit desks’ on the fourth floor of the Zell B. Miller Learning Center at the start of the semester that allow students to study while burning off calories.

Low-income students miss out on benefits of HOPE Scholarship

What the HOPE Scholarship is supposed to provide for numerous Georgia college students is not on par with the financial burdens they still face, according to a new analysis by the Georgia Budget and Policy Institute.

With classes in full swing and work piling up, college life can often take a toll on students' mental health. As the semester continues, it is important to maintain a healthy diet, exercise regularly and get a good amount of sleep.

The University of Georgia’s instate 2016-2017 tuition and fees of $11,634 seem modest relative to many private schools that routinely saddle s…