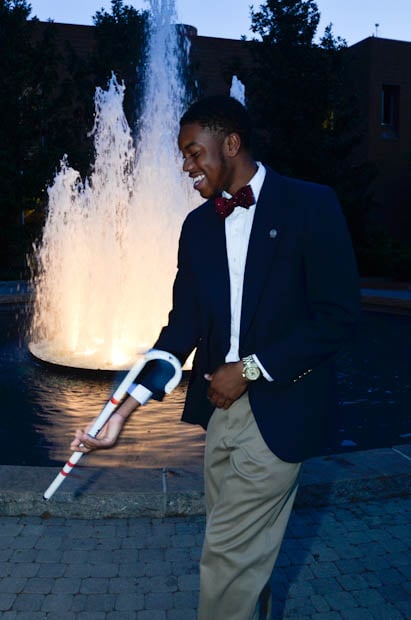 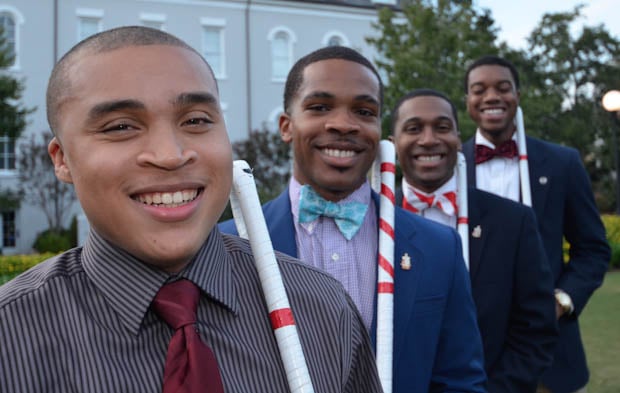 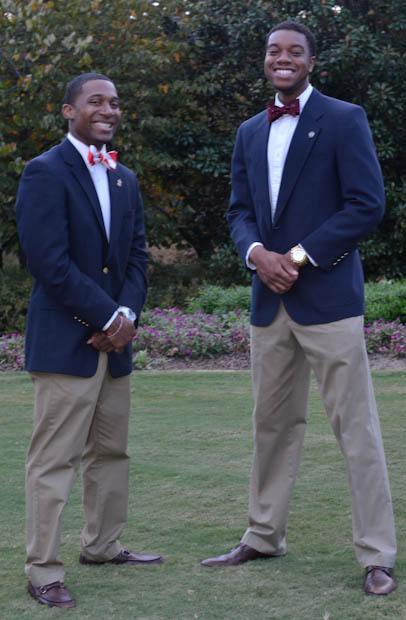 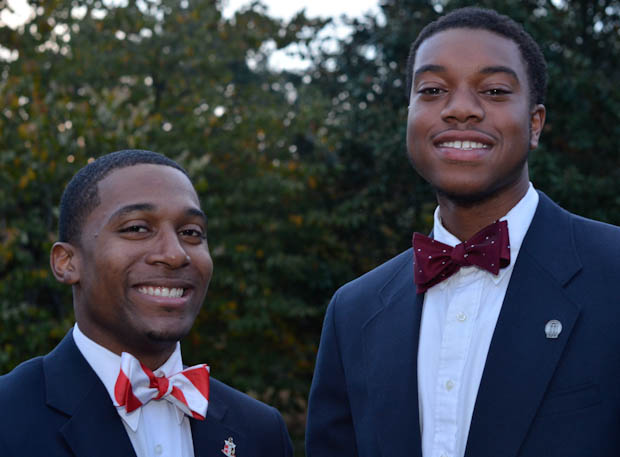 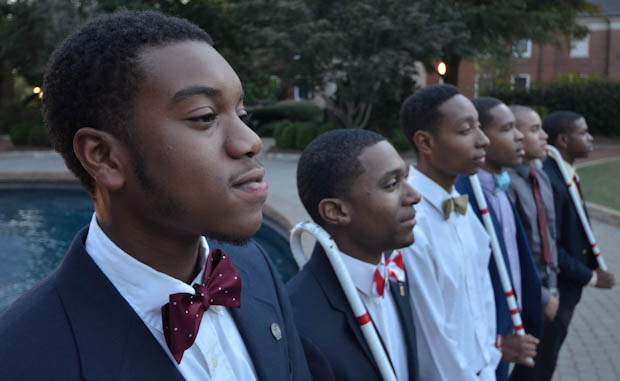 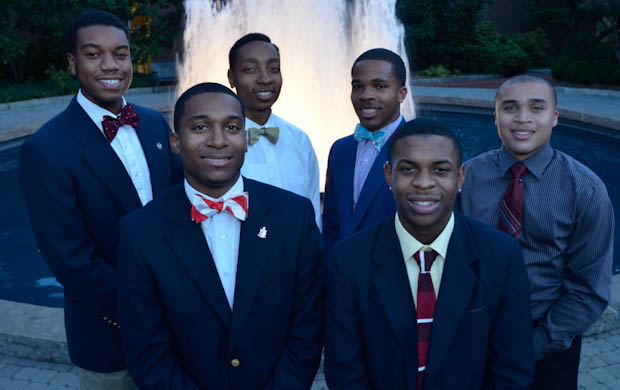 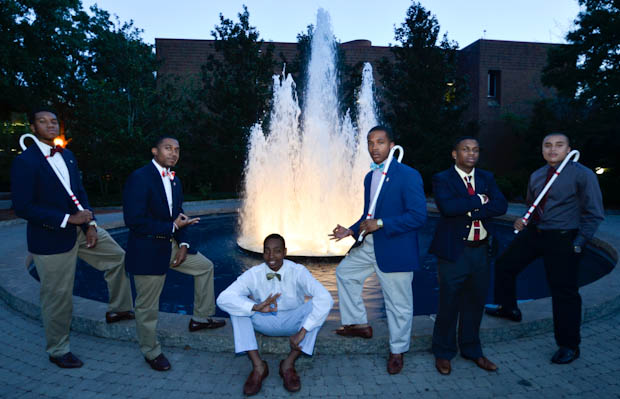 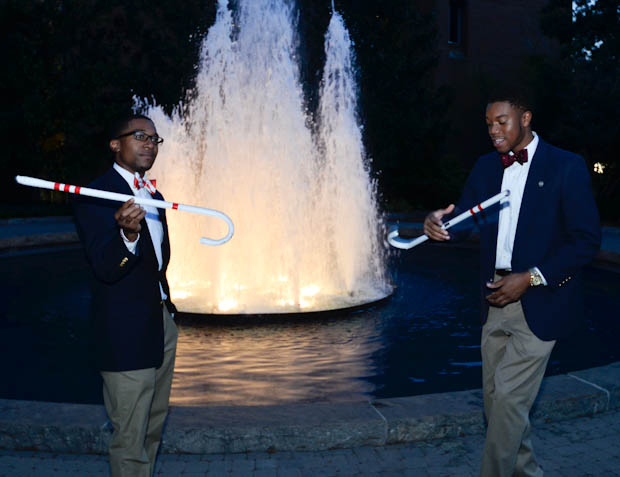 Kourtland Jones (left), Robert Ellis, Ugo Okeke and Nick Pope, were all members of the Zeta Iota chapter of Kappa Alpha Psi at UGA before it got suspended from campus for hazing violations.

Kourtland Jones, a senior accounting major from Atlanta, said part of what makes Kappa Alpha Psi so special is the dedication to reaching out to the youth.

“The brothers of Kappa Alpha Psi, we take pride in reaching out to those younger students,” the ZI chapter president said.

Jones joined the fraternity after first coming into contact with brothers when he was still in high school.

“Kappa Alpha Psi first struck interest in my mind when I was in high school. I was part of a leadership program called Kappa Leadership Development League,” Jones said. “We would have Kappas from the undergraduate level at colleges come and speak with us, we would have advisers from different grad chapters come and talk to us.”

Jason Moffit II, a senior business management major from Decatur, said he also first became aware of Kappa Alpha Psi in high school as a result of the Kappa League.

He said reaching out to younger generations ties back to the fraternity’s national Guide Right initiative.

“So our philanthropy is our Howard B. Stroud Guide Right initiative and this is basically where we go out and work with students in the Athens-Clarke community — Howard B. Stroud [Elementary] School — and we support the educational initiative and just helping those students out in all of their efforts and eventually coming to college and bettering themselves as individuals,” he said. “Howard B. Stroud is actually a member of Kappa Alpha Psi.”

Jones said the Guide Right initiative trickles down to the provincial level — each undergraduate chapter is placed in a region or state housed under a regional province.

“We are currently located in the Southeastern Province,” he said. “That includes the state of Georgia, South Carolina and a region in Africa.”

Moffit said the philanthropy is important to him because it contributes to what he wants to do after graduation.

“This philanthropy is important to me personally because what I eventually want to do post-grad is work with helping to eliminate educational inequities in low-income areas and impoverished areas around the world,” he said. “So by going out and working with these students, that’s giving me the first-hand experience as to what I want to do with my career.”

Moffit said in addition to a strong belief in philanthropy and an interest in educating children, Kappa Alpha Psi brothers incorporate a lot of tradition into their lives.

He said since the fraternity’s founding at Indiana University in 1911, the brothers have strived to live up to and set themselves apart by their motto, “achievement in every field of human endeavor.”

“We pride ourselves on that,” he said. “And our 10 founders basically set the foundation for the fraternity, and everything that it encompasses is what Kappa Alpha Psi stands for.”

Jones agrees the fraternity is rich with tradition, citing the long standing tradition of carrying canes — a symbol of unity — wrapped in the fraternity’s colors of crimson and cream.

“Back in the earlier days when our fraternity was founded, the brothers of Kappa Alpha Psi would walk around campus with canes to basically [distinguish] themselves from everyone else in a sense,” he said. “So to this day we kind of continue to carry that tradition by walking around with our canes. It’s a part of our history and tradition that we take pride in.”

Moffit said the canes represent the fraternity’s brand and what its members stand by.

He said he believes the tradition of achievement is one of the most important Kappa traditions.

“Going back to our motto — achievement in every field of human endeavor — that’s what I pride myself on,” he said. “In everything I do it’s achievement — whether that’s running a half marathon or giving a speech or just going out and acing a test, it’s put in, put in all your effort into this one thing and just striving to be the best person that you can be.”

Jones said beyond tradition and philanthropy, the important aspect of what makes the ZI chapter of the fraternity special to him personally is the close relationship between the Kappa brothers.

“This brotherhood, this bond, this noble clan, in it each brother pushes you to be the best you can be, and that’s every single day,” he said. “At the end of the day every brother is going to support you and just the fact that we get challenged, we get pushed, we get yelled at, you know, just having that tight brotherhood amongst us all personally means a lot to me.”

The girls of Sigma Gamma Rho Sorority Inc. put a strong emphasis on being a close-knit chapter devoted to service and making a difference.

Delta Tau Delta fraternity tries to live by the lessons taught during pledgeship.

Alpha Chi Omega sorority keeps its rituals close — and the character of its women closer.

While race isn’t the dividing barrier between Greek organizations on campus, Milledge Avenue…

In light of recent reporting of discrimination of a black student during Panhellenic rush at the University of Alabama, Cydney Adams, a black member of a UGA Panhellenic sorority, doesn’t want others to believe UGA conducts recruitment like the chapters at UA.

The History Graduate Student Association will be hosting a book sale in front of LeConte Hall Wednesday and Thursday.

The women of Delta Sigma Theta Sorority, Inc., once members, are a part of the sisterhood, scholarship and service for life.

The University of Georgia chapter of Delta Zeta focuses on fun, philanthropy and turtles.

The sisters of Sigma Sigma Rho Sorority, Inc. were founded on the idea of breaking stereotypes and living up to personal potential.

The brothers of the Theta Chi chapter of Delta Sigma Phi embrace their national philanthropy and raise money each year for the American Red Cross.

The projects and voice of the Iota Zeta chapter of Sigma Alpha Iota have begun to crescendo around the University of Georgia campus.

University of Georgia police have issued arrest warrants to members of a UGA fraternity Thursday for an incident involving hazing and will release the names of those involved Friday.