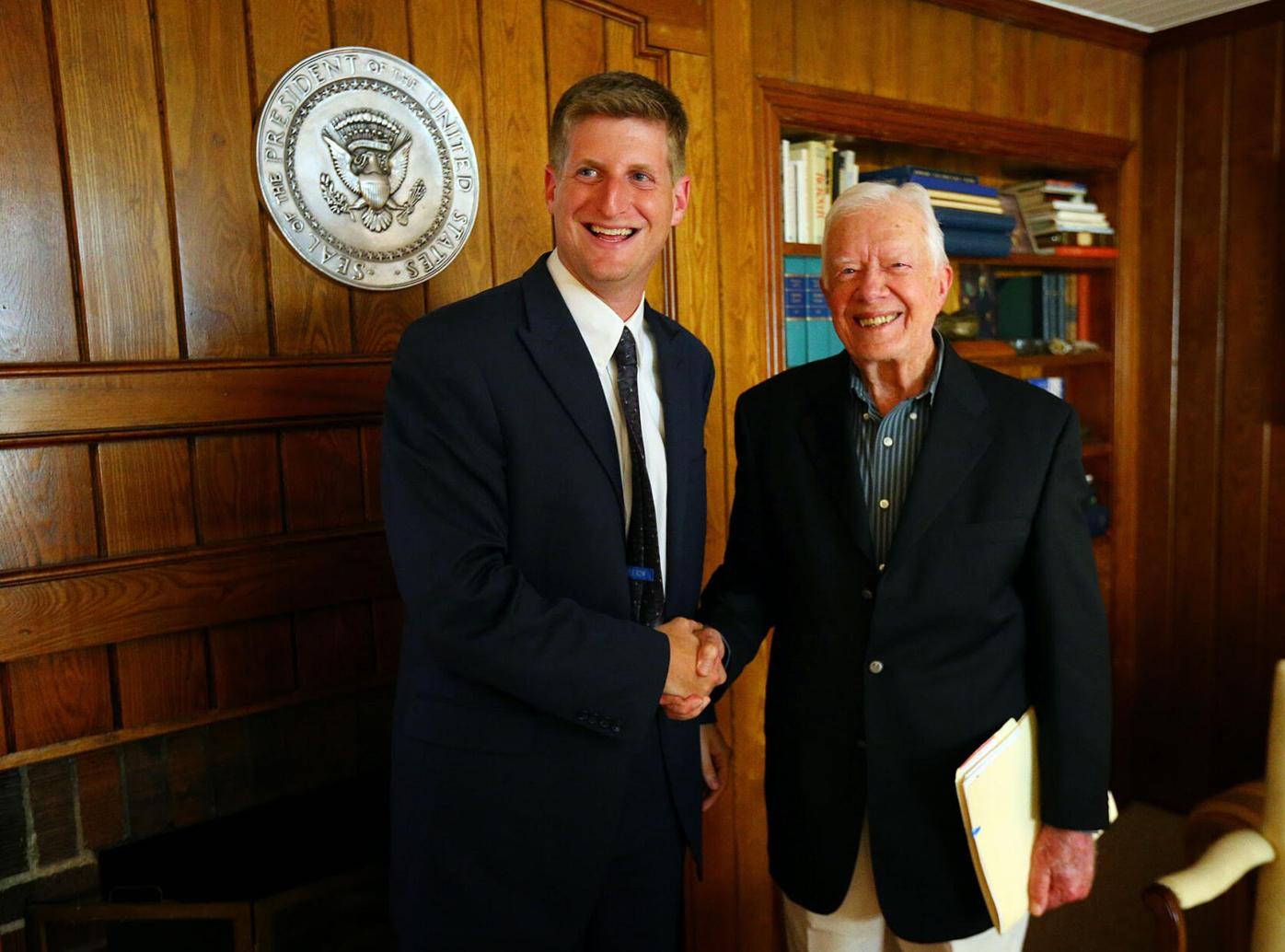 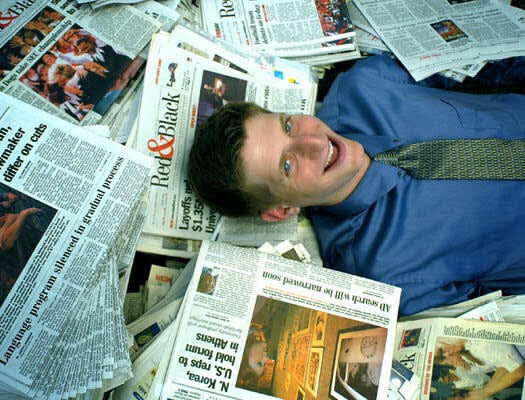 Greg Bluestein is easy to like. His quick laugh and his passion are disarming, his work ethic: inspiring.

When Samira Jafari talks about Bluestein, she can’t help but laugh. Now a senior editor at CNN, Jafari fondly remembers Bluestein as the goofy and eager reporter who pitched dozens of stories to her daily while she was editor-in-chief of The Red & Black in 2002.

As a journalist, Jafari said it’s hard to find someone who works harder than Bluestein, “but really, what makes him special is he's such a kind and honest, and good-natured person.”

Seventeen years after graduating from the University of Georgia with degrees in political science and newspapers, Bluestein will deliver Grady College’s convocation address along with Joshua Marx in a virtual pre-recorded ceremony on May 13.

Bluestein spent all four years of his undergraduate career writing for The Red & Black, moving from beat reporter up to editor-in-chief.

While covering the Student Government Association’s election season in 2002, Bluestein wrote one of his favorite stories and got to pair up with The Red & Black cartoonist at the time, Mack Williams.

“There was an SGA committee chairman, who we found out wasn't even a student,” Bluestein said.

Bluestein laughs while recounting the drama of that spring for SGA and The Red & Black fame he retroactively received after teaming up with Williams, a campus celebrity.

“My best friends knew I was super involved [with The Red & Black], but random people would be like, ‘Bluestein! I didn't know you were a Red & Black writer!’ after that,” Bluestein said.

Williams remembers goofing off in the office and trusting Bluestein for his comedic take while workshopping ideas for his cartoons.

“I'd have to go to the office to find out what was going to be in the paper the next day, bounce ideas off of people, talk to people, try to make jokes and see what was funny,” Williams said. “And Greg was definitely one of the top people. So if I pitched him a cartoon idea, and he thought it was funny, then that was definitely a good sign.”

Quickly moving up the ranks, Bluestein was promoted to editor-in-chief in August 2003 and made it his mission to step into the shoes of all his writers, shadowing reporters on every beat.

It was this curiosity and humility that made him a great reporter, Jafari said. She and Bluestein weren’t there to check a box on their college bucket lists — they loved the work.

“We really liked being there. And we really liked the privilege that came with being a storyteller for a newspaper,” Jafari said. “It's a privilege to do that work. And I think people like Greg handled that responsibility quite well and helped us really set that standard for what we wanted the paper to be.”

After graduation, Bluestein briefly wrote for The Daily Report in Atlanta before accepting a position with the Associated Press.

His bylines ran internationally with the wire service for seven years, but he is best known for the past nine years he’s served as a political reporter for The Atlanta Journal-Constitution.

Over the course of the past year and a half, Bluestein has gained national recognition for his reporting on the changing landscape of Georgia politics, but he’s been covering the Republican arc in Georgia since his days at UGA.

While an intern for the AP in 2002, he was asked to attend and report on Sonny Perdue’s gubernatorial election party.

“I think it was basically as an afterthought, because they're like, ‘Let's just have this college kid monitor this party just in case anything crazy happens,’ but everyone expected Roy Barnes to win,” Bluestein said. “Well, Sonny Perdue won and became the first Republican governor in Georgia since Reconstruction. So that's kind of how I started my political career, covering the rise of Republicans in Georgia.”

For the past 19 years, Bluestein has covered the gradual consolidation of Republican power in Georgia and its recession that culminated in the Senate elections earlier this year.

In January, Bluestein announced that he is writing the book on this transition, titled “How the Peach State Turned Purple.”

Despite the national attention, Bluestein said he never forgets his audience. It’s a lesson he learned as a student reporter in the aftermath of September 11, 2001.

“You could find a million stories about the international fallout of 9/11, but there weren't many people writing about how 9/11 security protocols were affecting UGA football games in downtown Athens, which had been shut down,” Bluestein said. “And it was a lesson that I’m glad I learned really early on.”

Since entering the workforce as a journalist, the field has transformed. Bluestein said the biggest shift he’s witnessed in the industry is the introduction of social media as an essential part of the job. He’s also been witness to the increasing demands of journalism in the modern era.

“Our main job is to write for the AJC website and the front page of the AJC,” Bluestein said. “But it's also to go on the radio and to go on Political Rewind and [Georgia Public Broadcasting]. And to go on TV and to do a daily newsletter and to do all these things that just weren't part of the equation when I graduated.”

Though his role and the media landscape as a whole have changed over his career, his advice for aspiring journalists remains the same: Be a human.

“Remind your sources and your readers that you're a human being too. You're not a faceless robot, turning out stories on the assembly line. To do that, one of the things you’ve got to do is just be empathetic,” Bluestein said.

Empathy is part of how he’s worked to combat recent distrust in the media.

“We've got to be upfront about our stories, be unflinching, with our coverage, but again … remind people that, ‘Hey, we're humans too.’ We're real people as well. And that we have a stake in the community that we're covering,” Bluestein said.

This balance of transparency and doggedness is one of the things that Jafari most admires about Bluestein.

“He truly is someone who exhibits fairness and balance without succumbing to neutrality,” Jafari said. “Objectivity doesn't mean neutrality. You're aiming for truth, not for neutrality. And I think Greg, journalistically, is a great embodiment of that.”

And though she’s excited for his success, Jafari is not at all surprised.

“He made an impression on everyone then as a superstar and clearly everyone's instincts were right, because he is. He’s a superstar, and it's well deserved,” Jafari said.

Three University of Georgia faculty members have been elected to the National Academy of Sciences.

Researchers at the UGA Skidaway Institute of Oceanography are working at the forefront of discovering how and to what extent humans are damaging the environment all along Georgia’s coast with the help of community volunteers.

Spring undergraduates will be able to sit on Dooley Field at Sanford Stadium and invite an unlimited number of guests to the stands.