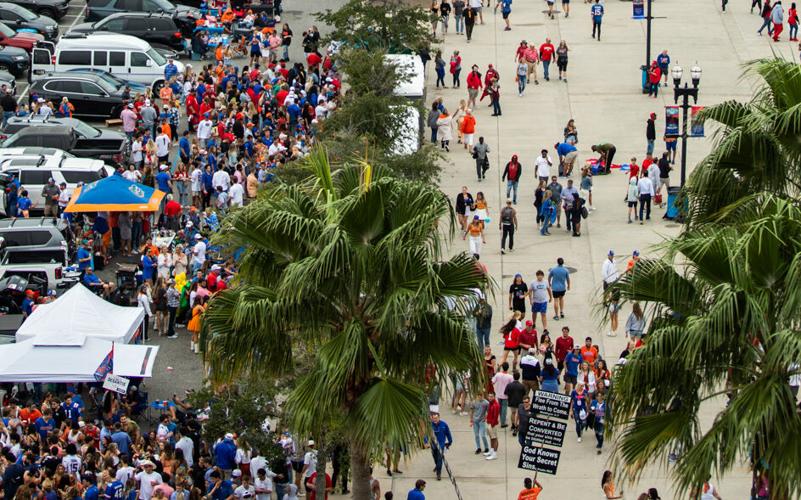 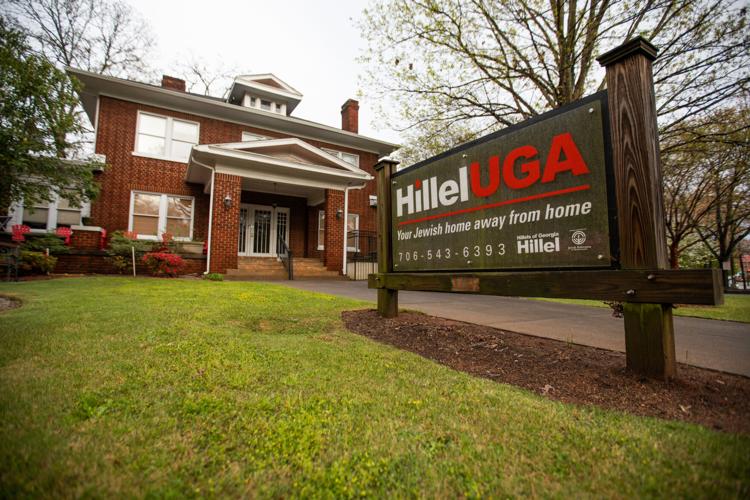 Hillel at the University of Georgia stands on Milledge Avenue in Athens, Georgia, on Tuesday, April 5, 2022. (Photo/Jessica Gratigny; @jgratphoto)

When Chase Flagel heard about an antisemitic message projected outside the stadium of the Georgia vs. Florida football game, he couldn’t help but feel surprised. He had been at the game — he might’ve even walked by the message unknowingly.

A sophomore at the University of Georgia who’s proud to be Jewish, Flagel said the message hit close to home.

Antisemitic messages were displayed in multiple spaces around Jacksonville, Florida on Oct. 29, including a highway overpass and downtown building. One message in particular, though, was projected on the outside of TIAA Bank Field during a football game that drives of UGA students made the trek to.

The projected sentence reinforced recent antisemitic comments made by Ye, the rapper formerly known as Kanye West, reading: “Kanye is right about the Jews!!!”

Although the creator of the message is unknown, the feeling of hurt rippled through Jewish communities.

“It's just surreal to think that it happened to a place that I was at,” Flagel said. “That's the closest I've ever experienced antisemitism whether I even realize it or not.”

Flagel, who used to be a big fan of Ye, said he can no longer support the artist. After the event, he and his Tau Epsilon Phi fraternity brothers took their Ye posters off the walls and stopped playing the rapper’s music as much.

In response to the event, his fraternity increased their security in addition to other organizations around campus that hold Jewish members, according to Flagel.

Flagel said he plans to fight antisemitism himself by leaning into his religion. One way he’ll do this is by proudly untucking his Chai necklace, a Jewish symbol representing the celebration of life and happiness, according to Flagel, from the inside of his t-shirts.

But not all students feel ready to do this. UGA senior Sarah Schafer, who usually displays Judaism through her words, t-shirts, school projects and jewelry, feels like she almost has to hide this part of herself.

“I'm definitely more hesitant to be outwardly Jewish because I don’t know what the reaction is gonna be,” Schafer said.

Schafer was in Cincinnati visiting her sister when she found out about the antisemitic messages in Jacksonville. From miles away, she said she felt her stomach and heart drop.

Now, she feels more anger and frustration at the event, hoping for a personal message condemning antisemitism from a prominent figure at UGA like president Jere Morehead or head football coach Kirby Smart rather than a joint social media post, which was posted the day after the event.

“That'll touch a lot more people than if I say something because not many people know me,” Schafer said. “I can talk all I want, advocate for myself all I want but me advocating for myself and a small but mighty Jewish community advocating for themselves has proven to not do as much as having allyship from other people that also speak out.”

The fact that Ye has a large platform with millions of listeners worries Schafer because of the influence he has on people when it comes to antisemitism. She said she doesn’t think his words should be taken lightly.

“It takes one person to create a big problem — to create big tragedy and trauma,” Schafer said. “It doesn't help that this one person is a really prominent figure in our generation in particular.”

Jeremy Lichtig, campus director of Hillel at UGA, said he received a text message at 2 a.m. with the news of the antisemitic message, felt disbelief and got to work.

Lichtig said he immediately asked himself how he could help the students, as he set his alarm for 7 a.m.

He prepared to send messages out to students and parents, ensuring them that they have support and safety from Athens, Hillel and UGA.

Lichtig said he worked with UGA to show support and was thankful for their response, sharing information and making social media announcements to students and staff.

While acknowledging the hurt the messages caused, Lichtig said he sees the event as an opportunity for the Athens community to learn from what happened and grow together.

“This is one of those things that can't go out of sight out of mind. Just because things might go out the new cycle doesn't mean we're stopping,” Lichtig said. “We’re still asking questions and still demanding the best out of this community.”

After the Florida-Georgia game on Oct. 29 at TIAA Bank Field in Jacksonville, Florida, antisemitic messages were seen outside of the stadium and at other locations in Jacksonville.

OPINION: Ye’s platform cannot be a mouthpiece for hate

Not only has Ye, formerly known as Kanye West, deeply offended the Jewish community — he has put us all in danger. His rhetoric is far more dangerous than many can even begin to realize.

In order to combat the shortage of certified nursing assistants in Georgia, the University of Georgia College of Public Health’s Institute for Disaster Management and Institute of Gerontology has launched an initiative to increase the amount of CNAs in the state.

The project is part of a larger initiative to improve infrastructure on Prince Avenue, from Sunset Drive to Pulaski Street. The initiative is based on previous studies regarding traffic safety, with $350,000 being allocated to the pilot project for up to 180 days by the Athens-Clarke County Mayor and Commission.

In this week's UGA blotter, a student’s AirPods were stolen, a washing machine was damaged, and more.