Nearly 400 positions at the University of Georgia would be eliminated or held vacant under its fiscal year 2021 budget proposal. This reduction is part of the University System of Georgia’s overall plan to cut its budget by 14% for the next fiscal year due to revenue loss caused by the coronavirus.

UGA’s proposed fiscal year 2021 budget is $362 million, down $59 million from fiscal year 2020. The report said an estimated 394 positions would be eliminated or held vacant, which means if the university were looking to hire someone for the 2021 school year, the position would need to remain unfilled.

The 51-page report outlined 568 action items taken to reduce UGA’s budget across multiple colleges and programs within the university. Operating expenses in every department would be reduced, while funds for traveling would be reduced or eliminated across colleges. Some faculty and staff positions would either be eliminated or receive decreased pay. UGA would also hire less student workers. 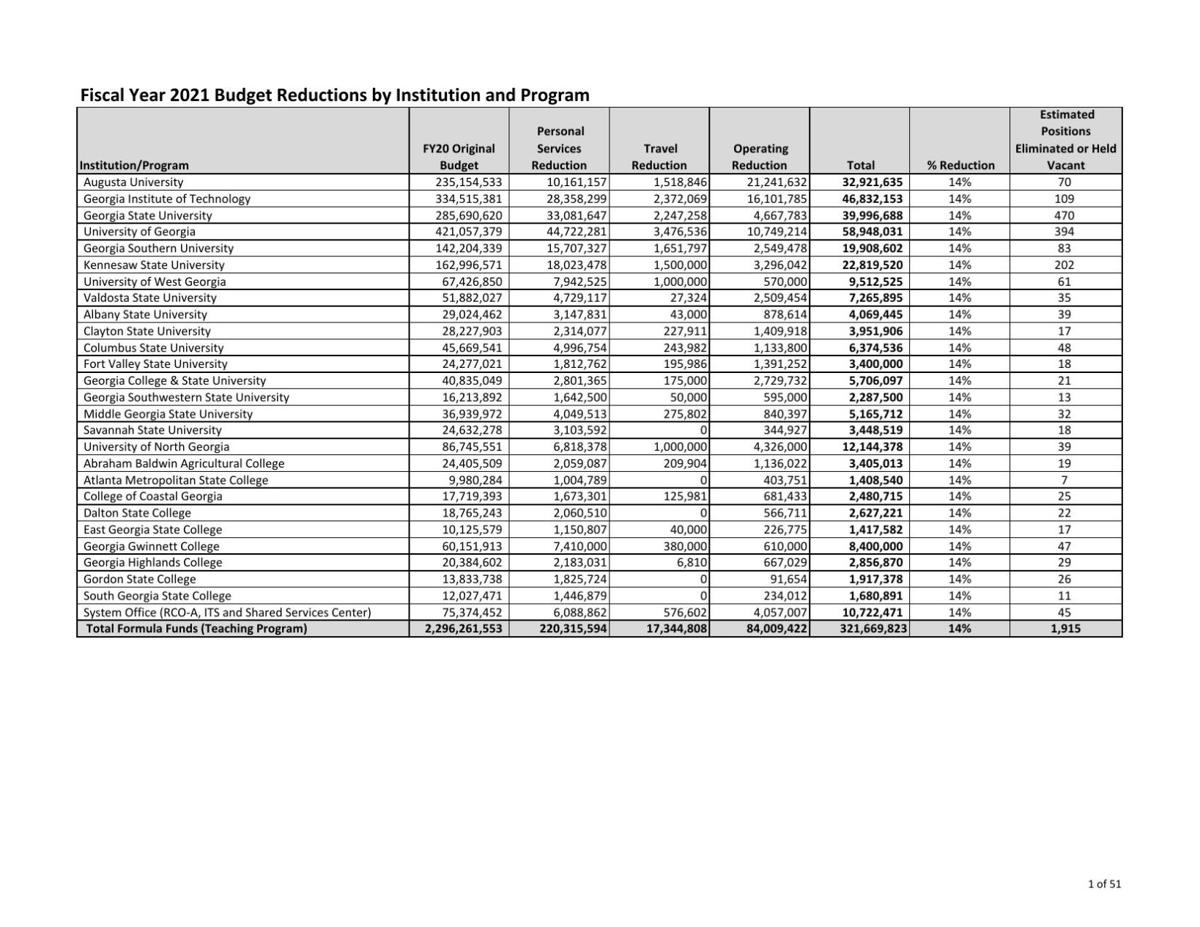 The report included some consequences of the proposed actions. The elimination of filled positions in UGA’s Central Business Office “would lead to a severe disruption in service including delays in hiring, meeting board requests, reporting and accounting, and delay in student account processing,” the report said. Eliminating two positions in Academic Advising Services “will increase the workload on all advisors and require limiting services to students,” and cause wait times to increase.

Wrigley and university system presidents would take the maximum of 26 unpaid days off during fiscal year 2021, which equates to about a 10% pay reduction, Wrigley said during the meeting.

The budget reduction plan has to be approved by the Georgia Legislature and signed by Gov. Brian Kemp before it is implemented. The 2020 state legislative session was suspended indefinitely in March due to the coronavirus, and the legislature will announce when it reconvenes. Fiscal year 2021 begins July 1 of this year.

University System of Georgia to reduce budget by 14%

The University System of Georgia must submit a proposal to reduce their base budget by 14% for fiscal year 2021 due to statewide revenue loss from the coronavirus.

GUEST COLUMN: UGA's plan to layoff many custodial and maintenance workers is heartless

The University of Georgia plans to layoff 40 employees from the category of “building services” and “work requests”. This is a heartless and ill-advised policy.

A Red & Black guest column from June 4 criticized the University of Georgia's plan to manage potential cuts to the state budget as "heartless" and "ill-advised." However, UGA values its workers and will do everything it can to protect them.

The state legislature approved a final fiscal year 2021 budget that doesn’t include mandatory furloughs for University System of Georgia employees.

How about a pay cut for Kirby?? 1/10 of his salary would pay a lot of these people. Disgrace.